It’s a Great Time to Be a Himbo

Now more than ever, the world needs hot dudes who aren’t necessarily smart

In 1988, Rita Kempley, a film critic for the Washington Post, hit upon a formidable portmanteau: “Himbo.” She coined the term — a mashup of “him” and “bimbo” — to describe the glut of a masculine archetype then crowding the silver screen. In short, moviegoers of the time were enamored with big beefcakes who evinced little in the way of intellect or emotional depth. The examples ran along a spectrum, Kempley argued, from the gleaming, hairless, roided-up action stars (Arnold Schwarzenegger, Sylvester Stallone, Carl Weathers) to the refined “himbeaux,” with somewhat more realistic physiques, cultivated sex appeal and serious acting ambition (Richard Gere, Bruce Willis, Mel Gibson). All played ripped-and-dumb guys to excellence and wide acclaim.

While the shirtless, steroidal hero wielding double Uzis has largely disappeared from the culture in the past 30 years — Vin Diesel as Dominic Toretto in the Fast and Furious franchise is perhaps the last straight-up strongman — the other kind of himbo has endured, and even flourished. Steven Soderberg’s Magic Mike (2012) was a landmark for contemporary himboism, pulling together an ensemble that included Channing Tatum and himbo king Matthew McConaughey; the movie revels in the performances of male strippers as they flaunt their muscles and gyrate to tunes such as “It’s Raining Men.” It’s the chiseled male body as glorious instrument, free of all but rhythm and tone.

But while the himbo’s simpleness is his charm, his popularity leads to the usual fraught politics of attraction and desire. To be a himbo calls for self-objectification; one must want to be seen as a piece of meat. Kempley identified this urge as a reaction to power-suit feminism, saying that as women dressed to downplay their figures, men started pumping iron and adding bulk in search of Atlas-like proportions. The difference today is that anyone can show off those gains, and quickly find an audience for them: Instagram, dating apps, OnlyFans and other digital media have rewarded those willing to sculpt their torsos and pose in various states of undress.

A term for the person committed to this visual mass flirtation (or, if you like, promiscuity) is “thot,” which once carried the female-specific connotation of a “slut” or “whore” but has since grown to encompass all genders and identities. A male thot is often also a himbo, as long as his motivations are pure.

Here’s where shit gets weird. See, it’s one thing to celebrate men displaying their hunkiness without inhibition, and for communal worship, if he understands that’s what he’s doing. Except the idea of a himbo, whose appearance is prized above his mostly irrelevant mind, presumes a kind of stupidity or blankness — “no thoughts, head empty” — to complement his godly shape. He cannot exist as a perfect beast if he’s clouded by human reasoning. If you take this literally, you might arrive at the strange opinion expressed in the tweet above, a subject of great hilarity this past weekend: to covet a himbo, the author claimed, is to want a partner of sexual, though not mental, capacity. Therefore, any relationship with a himbo creates a power dynamic that may harm him. 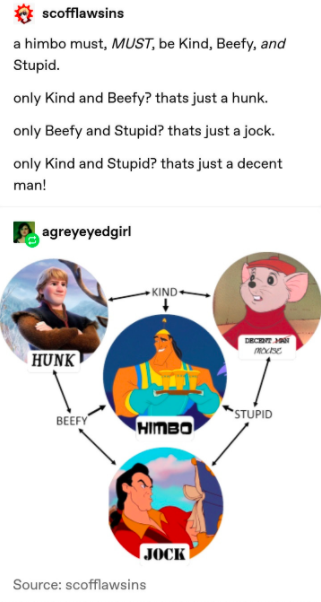 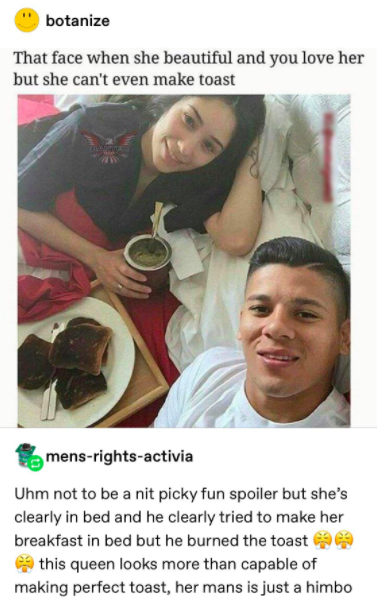 Of course, nobody (else) has seriously suggested that himbos are cognitively disabled; references to their humble brainpower are exaggerated and affectionate, not clinical. It might be more accurate to say they are naïve galoots, enjoying the advantage of slightly lowered expectations. The himbo may not solve cold fusion or write the next great American novel, but that’s not where his value lies. Most importantly, his distance from the cerebral means he is unaffected by the egomania of genius and its wannabe heirs. His superficial vanity replaces the need for supremacy and domination. The violent, militaristic himboism of Schwarzenegger and Stallone is obsolete, now just fodder for himbo pastiche, as when the Magic Mike boys do a striptease in soldier camo.

And so, in truth, we seem to have entered the Golden Age of the Himbo. Here in 2020, as millions are plagued by intrusive fears and toxic “discourse” among the supposedly smart, there is little hotter than a well-built man to hold you tight and project good vibes. The himbo is nothing so much as a teddy bear in Chippendales gear, hard of bicep yet tender in spirit. These gentle oafs are a special breed, too innocent to hurt out of malice or insecurity, too serene in their size and strength to even start a war of words. The himbo poses and flexes, he winks and he smiles, he works on his car and he watches the TV shows you like. It doesn’t have to be more complicated, we’ve finally realized.

The himbo, moreover, is happy. He dreams not of acquisition and conquest, as his humble imagination leans toward the basic comforts: a home gym, nice friends, grilled dinners and an energetic dog. Who would not envy that calm in the maelstrom that is the present? Who would not want access to it?

We love the himbo for his body, though also what it signifies — an easy, inborn, almost accidental grace. Kindness comes as naturally as the abs, and it has never occurred to him to give up either. The world turns, and the himbo rides it, sharing himself for all to admire.

What a blessing we behold.