‘Space Force’ Doesn’t Want to Be ‘The Office 2.0.’ But It’s Not Really Anything Else, Either.

Inspired by Trump’s idiotic idea for a new branch of the military, this flashy Steve Carell sitcom recycles workplace-comedy tropes while trying to achieve liftoff

In a recent interview, Steve Carell didn’t so much explain what Space Force was as talk about what it wasn’t. “We didn’t want to make the space version of The Office, which is funny, because as soon as it was announced, that’s what everybody started calling it,” said the actor, who co-created this new Netflix sitcom with Greg Daniels, the man behind the American version of The Office. “But that was a conscious decision. We didn’t want to retrace our steps in any way.”

After watching all 10 episodes of Season One, I can declare that they succeeded: This new series eschews their old program’s fake-documentary framework and carefully crafted brand of cringe comedy. But in lieu of not being The Office, Space Force can’t quite decide what sort of show it wants to be instead.

You might assume this series (which starts streaming on Friday) will be a political satire since the show was clearly inspired by Trump’s moronic idea for a new “Space Force” branch of the military. (The series’ characters refer to “POTUS,” who we never see or hear but is a Trump-ish buffoon with a penchant for impulsive behavior.) But it’s not really that, either. Best I can tell, Space Force is a likable, sorta sweet, not particularly inspired comedy that looks like it cost a ton of money to make.

A workplace sitcom featuring Carell’s buttoned-down, fiercely patriotic General Mark Naird, who has been tasked with getting the nascent Space Force program literally off the ground, Space Force cycles through a lot of different styles. Sometimes it’s action-packed with lots of cliffhangers. Other times, it’s a gentle family comedy — and that’s when it’s not a liberal, mushy paean to science, space exploration and old-fashioned American ingenuity. Space Force is a bit of a lot of different things, which leaves it ending up not being about much of anything.

As Space Force begins, we follow along as Mark (Carell), an Air Force lifer, gets the assignment to head the new Space Force program, which his mocking colleagues in the other military branches assume will be a complete disaster. Determined to prove them wrong, Mark moves from Washington with his wife Maggie (Lisa Kudrow) and angst-y teen daughter Erin (Diana Silvers) to Colorado, where a lavish compound has been erected to send manned missions to the moon.

Once he arrives at Space Force, he’ll meet an assortment of wacky characters — very much the “one of each” collection of types you see in office comedies — but his main foil is chief scientist Dr. Adrian Mallory (John Malkovich), who has devoted his entire life to studying outer space and is resentful that his research is tied to the U.S. government’s warmongering mindset. Mark is a rah-rah company man who wants results, while Adrian has a poet’s soul and cares about advancing humanity’s understanding of the solar system and our place in it. Will their perfectly oppositional personalities occasionally lead to comic friction? Oh, you know it.

Much has been made of the fact that Space Force represents Carell’s first sitcom since leaving The Office — he played the fired sexual predator on Apple TV+’s drama series The Morning Show — a move that was precipitated by his becoming a movie star thanks to hits like Anchorman and The 40-Year-Old Virgin. But since exiting The Office, he’s done strong, sensitive work in indies such as Little Miss Sunshine and Foxcatcher, creating the impression that while he first came to the public’s notice as a funnyman, he might actually be an even better, more nuanced dramatic actor.

Space Force does nothing to alter that suspicion. Mark is not Michael Scott 2.0 — his dumb, needy boss character from The Office — but too often he feels like a clever construction as opposed to an actual human being. Carell has given him a precise walk and a blunt voice — he seems to be channeling George C. Scott’s bullheaded military man from Dr. Strangelove — that’s meant to project authority and confidence, which will most assuredly be undermined by the rank incompetence around him. But the performance is so fussy that it never comes to life.

Which is a shame considering that in recent films like The Big Short, Battle of the Sexes, Last Flag Flying and Beautiful Boy, Carell figured out how to do serious roles without indulging in actor-ly tics. (He could play “real” without making it seem like some great effort.) By comparison, Mark is “funny” without being that funny — he’s a less-interesting riff on the rigid but goodhearted Hank Hill of King of the Hill or Ron Swanson of Parks & Recreation, two other shows that Daniels co-created. Tellingly, the more Carell — and Space Force — tries to avoid sitcom-y comedy and instead goes for genuine sentiment, the better he is. 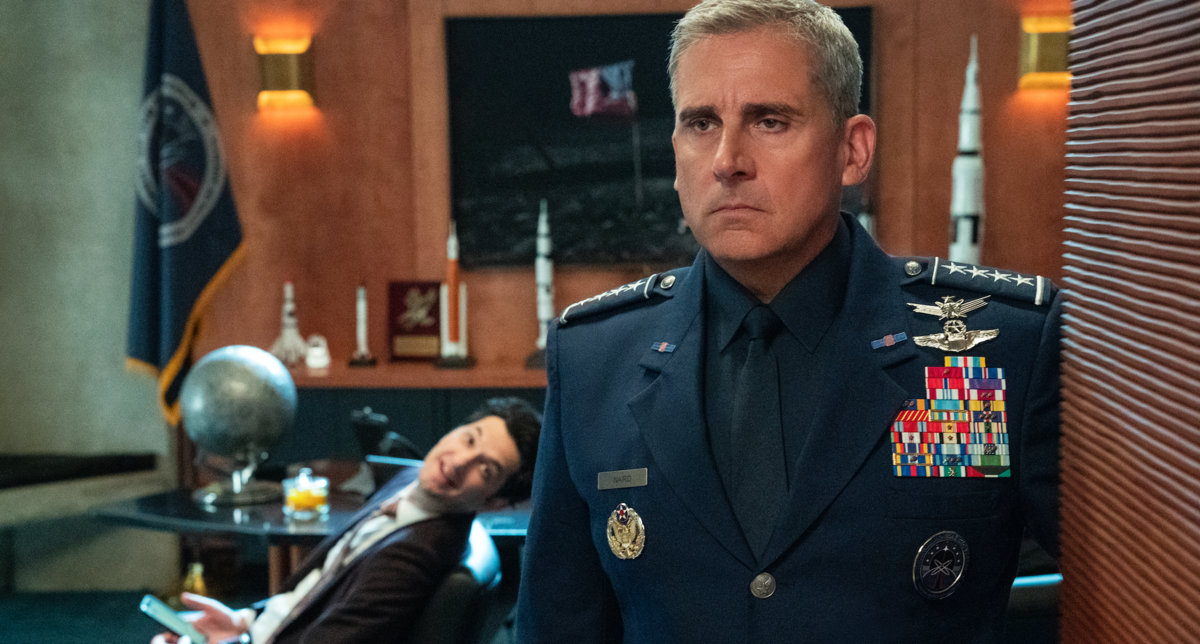 It doesn’t help that Mark has been saddled with some really generic dumb-guy supporting players. His assistant (Don Lake) is a cheery moron. His press secretary (Ben Schwartz) is a shallow, social-media-obsessed nitwit because, y’know, millennials. Just about everyone that Mark interacts with in government or the military is an opportunistic heel — and, also, probably stupid. This is meant to make Mark’s stressed-out, tightly-wound demeanor all the more amusing, and Carell is such an empathetic presence that you do feel for the guy, who despite the bureaucracy and backstabbing really does want to renew America’s space program and, in addition, the country’s optimism about itself. But that, too, feels like a familiar construct: Mark is an idealistic Leslie Knope type, impassioned if a bit out of his depth, who believes in his cause, even if few around him do.

The first few episodes are especially rough as Carell tries to figure out how silly to make Mark. But eventually, Space Force starts to find its rhythm. Carell and Malkovich establish a nicely combative rapport, which slowly morphs into respect once their characters realize they’re just about the only capable people on the base. Likewise, the show is a great platform for Tawny Newsome, part of the cult favorite Bajillion Dollar Propertie$, who plays Angela, a prospective astronaut who has the potential to be the first black woman on the moon. (No pressure.) While most of the cast is busy depicting eccentrics, Newsome is understated and endearing. Angela knows that, because of racism and sexism, she has to be smarter and better than everyone around her — otherwise, she’d never get ahead. She’ll develop a tentative romance with another side character, and it’s one of Space Force’s happiest developments — it feels real and grounded, as opposed to the strained high-concept hilarity that frequently defines the show.

That unearned swagger ends up being one of Space Force’s biggest weaknesses, setting high expectations for a show that (so far) can’t deliver. For one thing, this sitcom seems to have the budget of a Hollywood blockbuster: The base’s control room is a sleek, pricey affair, and the outer-space sequences boast some surprisingly impressive special effects. From Oscar-nominee Carter Burwell’s soaring score to the show’s sophisticated visual palette — moody lighting and widescreen compositions give the series a cinematic sheen — Space Force announces itself as a big deal, with a bunch of major names in front of and behind the camera. And that’s to say nothing of the presence of Carell and fellow Oscar-nominee Malkovich, who does a superb variation of his beleaguered, exploding Burn After Reading character. (With his excellent elocution and refined manner, Malkovich is great when he loses his shit and just lets fly with a litany of F-bombs.)

Off and on over these 10 episodes, you can see the fun, emotionally intricate series that Carell and Daniels were shooting for. As Space Force begins to locate the vulnerability beneath Mark’s atten-hut gruffness, I started warming to the show, even if the sitcom’s exploration of his uneven work-home balance doesn’t feel particularly fresh. When you come down to it, the series mostly feels like the work of people who thought the title (and the Trump connection) were too funny to pass up. There’s still potential here, but to this point, Space Force is like many expensive government programs: It’s a lot of hype without nearly enough tangible benefits. Space Force’s creators don’t want us to compare their new show to their old show, but there’s one correlation they might find encouraging: It took a couple seasons for The Office to really achieve liftoff, too.