The World of Instagram Menswear Is a ‘Matrix’ Illusion

My trendy floral button-down is part of a massive drop-shipping enterprise that rebrands cheap, Chinese-made threads as trendy Instagram fashion. Is it a scam? Or just capitalism working as designed?

I’ve always loved going to the mall, so it felt strange and sad to witness the end of communal shopping at the onset of the pandemic. The closing of stores felt apocalyptic; I wondered how long it would be before I found myself in a dressing room, holding a perfect haul of shirts again.

For better and worse, swaths of America have reopened in the face of COVID risk. But even with shops operating as normal again, there’s no ignoring the fact that the pandemic fundamentally shifted how many of us buy clothes. Shopping online has boomed, and I don’t think it’s a coincidence that it feels as if I’ve consumed more digital ads for clothes than ever before. Sitting inside and scrolling through Instagram and TikTok a lot will do that.

I’m not surprised either that I got seduced by those ads — namely, the ones with button-up shirts and bright stripes and geometric patterns. But something seemed fishy from the outset when I clicked on a retailer dubbed Etsman. The shirts looked great, but the company seemed like a false front. The “About Us” page gave it away: 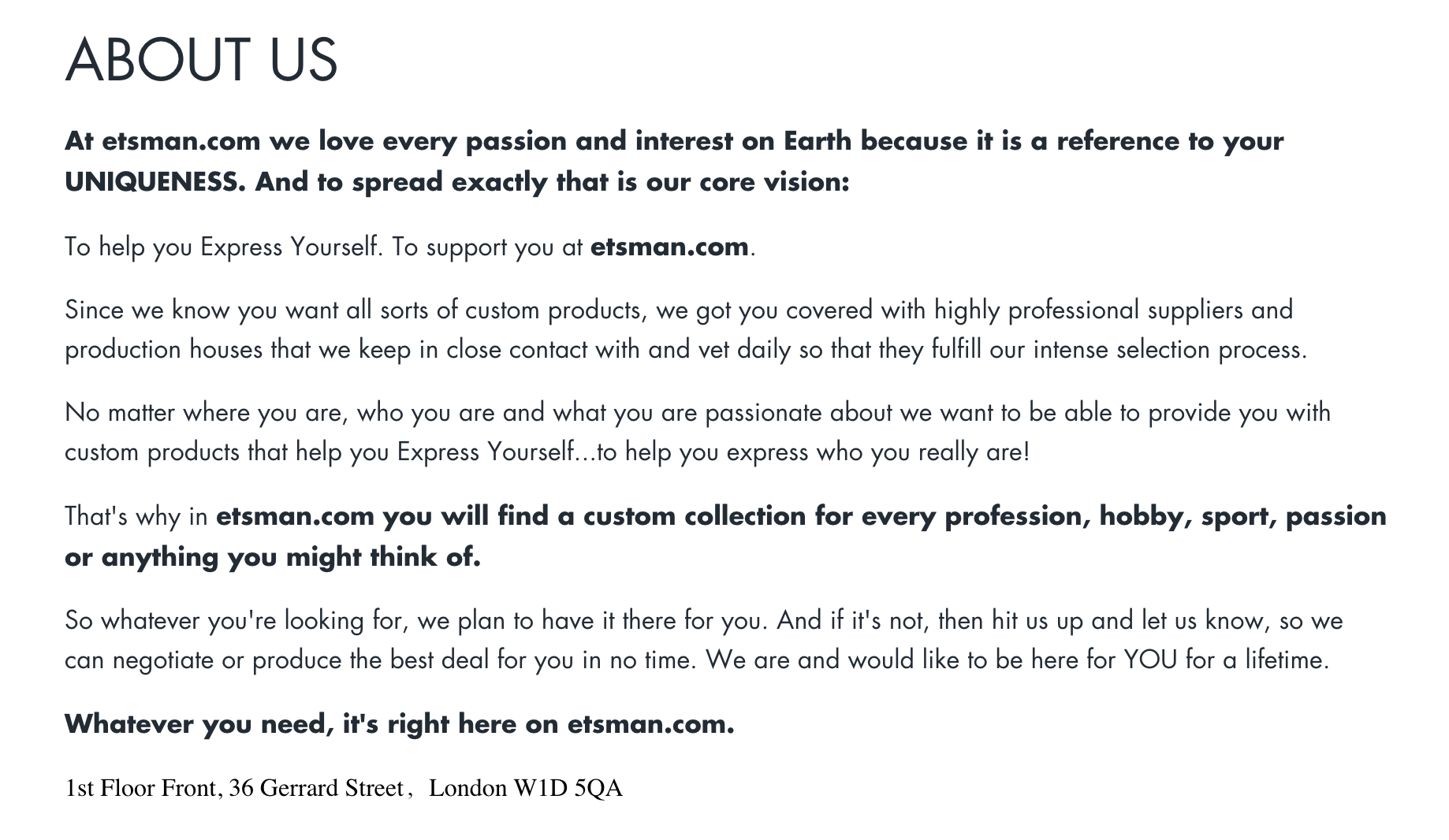 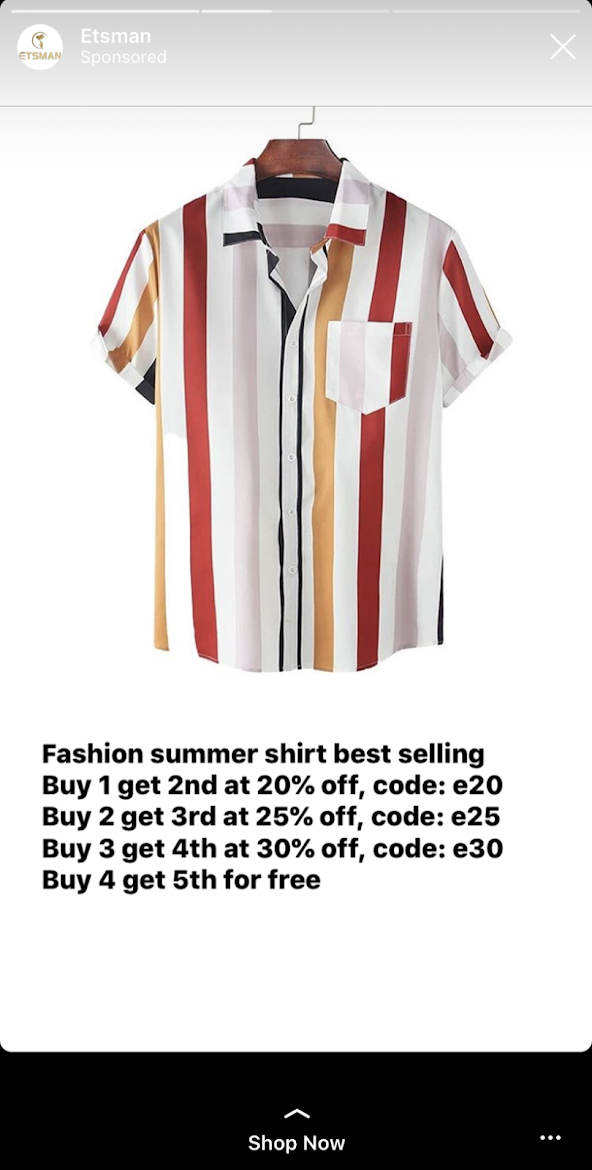 I had almost dropped $80 on a company that looked fraudulent — and it made me reconsider past purchases from oddball e-retailers that I’d never heard of. The handful of shirts and joggers I bought from Instagram brands had arrived just fine, if a little underwhelming in quality. But some digging online made me realize that I hadn’t fallen for a scam, so much as a sleight of hand. No one was trying to steal my money, per se, but the Instagram economy of clothing retailers was a Matrix illusion, with middlemen and profits I never accounted for.

It dawned on me that I was on the losing end of drop-shipping schemes. The grift is simple: Someone sets up a makeshift brand on Instagram and Facebook, then spends money on sponsored social media posts and ads that drive traffic to a handful of products. They forward product orders to a third-party manufacturer, often a company based in China, which then sends the shipment direct to the person who ordered it. The dropshipper doesn’t keep any kind of inventory or ship anything themselves; their profits come from marking up the original item.

It’s an illusion that can cause deja vu, because you end up seeing the same short-sleeve shirts and tasteful wide-leg trousers again and again, from different vendors. That’s how fellow floral shirt enthusiast Flavio Lamenza ended up realizing that he was being advertised the same shirt from a whole network of scammy Instagram brands, many of which had negative reviews for failed returns and other ordering problems. Defenders of the drop-shipping business model say that it helps connect vendors and buyers directly, and serves a similar role to conventional marketing or franchising while stripping away costs. But it’s a hard argument to accept given the fact that it’s so easy to buy the same items for cheaper, from a wholesale source, through the same exact platforms that dropshippers use.

It’s a common topic on streetwear Reddit, on threads where newbies discover that those reflective techwear joggers they’ve been drooling over on Instagram can be found for half the price on international sites like AliExpress or TaoBao. Even more ironically, you can now search by image on AliExpress, meaning that literally copying a picture of a shirt and entering it will lead you to the original seller. The drop-shipping con relies on the fact that you probably won’t bother looking. It’s the same reason why you see alleged (but really fake) discounts splashed across the entire inventories of some Instagram brands — the illusion convinces you that it’s a good deal. 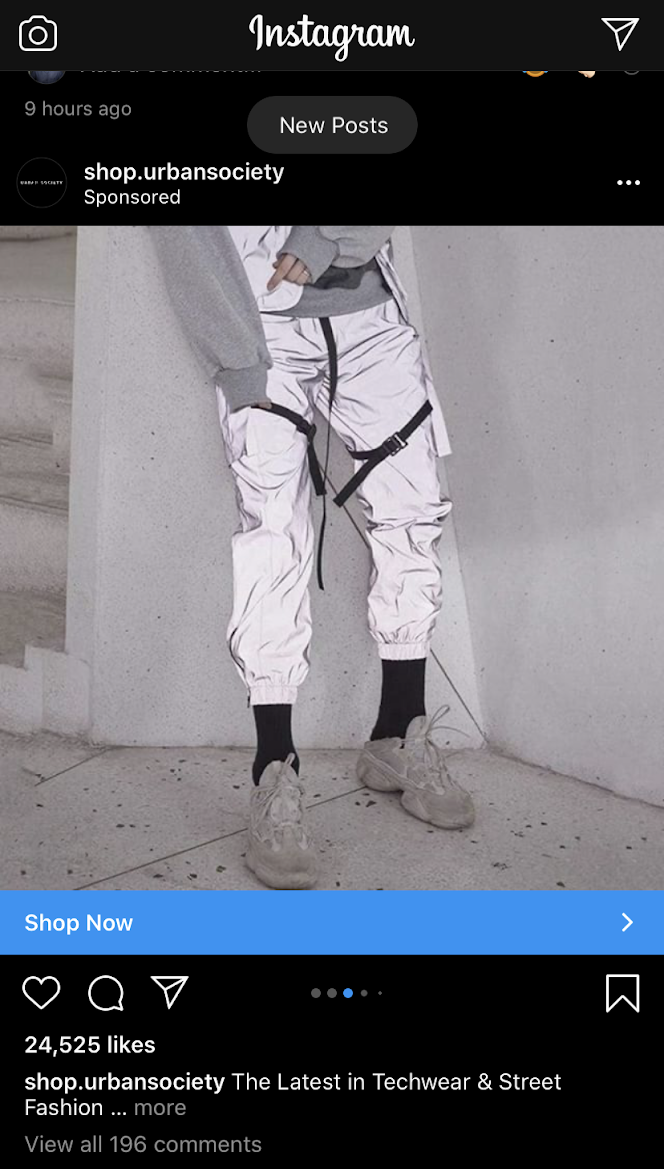 Maybe it’s unfair for me to call this a scam. Maybe, this is really the natural extension of the rise of fast fashion, that ever-speeding churn of cheap clothes made with even cheaper labor, designed to be modeled and discarded with every twist of a season’s trends. We’re buying more clothes per person than ever, and throwing away more clothes than ever, after shorter periods of wear than ever. Of course the commerce world adapted, rapidly feeding our overstimulated need for new looks and fits with the clothing equivalent of Pringles. Nobody debates the quality of cheap menswear marketed by temporary IG brands, because the quality is routinely terrible. The debate is about whether drop-shipping is a scam, or just capitalism working as designed.

The artist and writer Jenny Odell investigated this tension in 2017, when she traced the origin of a viral stainless-steel watch marketed as “free,” save for a $7 shipping fee. In one way, it was everything wrong with American consumerism and the so-called benefits of globalization — a piece of shit watch, operational but somehow worthless, born simply for an online stunt by a brand that wouldn’t and couldn’t last. “Meanwhile, even if the brand is a fiction, the object is not… And almost immediately after being produced, it is reviled, doomed to live out its stainless steel life, less a teller of time than an incarnation of petty deception,” Odell wrote. “In that sense, it may be the best artifact of capitalism one could ask for.”

I don’t think it’s that much of a stretch when she notes the irony of the zero-dollar watch being a bald ripoff of another Instagram sensation, Daniel Wellington watches, which are also terribly low quality pieces marked up thanks to a massive marketing push and willing assistance from influencers. The only real difference, Odell suggests, is the marketing and influencers were better; that the watch is technically nicer hardly matters at all.

If that’s the case, is the drop-shipping hustle something that deserves more credit, not less? The seemingly scammy act of literally forwarding orders from a illusory IG page is widely billed on YouTube as a get-rich-quick hustle, but tales of the struggle on Reddit seem to suggest it’s as poor a choice for the operator as the customer.

As is often the case, the winners, losers and ethics of this system start to blur when you think about it too much. The implication of capitalism has always been that the truth has to be hidden in order for the system to work; we are always, in one way or another, getting ripped off by someone who gets to us with an idea before anyone else, even if we never ask for anything in the first place. PacSun and Hot Topic sold me overpriced clothes a long time ago, and I did nothing but smile while shelling out. What changes when it’s an anonymous entity online, other than a sketchier return policy?

I’m going to start shopping on AliExpress now, because seeing through the Matrix means you can game the system a little. But learning to see through bullshit Instagram brands made me reconsider shopping for new stuff altogether. As former Highsnobiety editor Alec Leach told MEL last year, we’re all just buying too much, at the end of the day. “The fashion industry wants us to be buying new stuff nonstop, and people who buy new stuff nonstop tend to look like shit,” he said. “Going on a new-stuff detox is great: You really appreciate the stuff you have already, and you need to go on a bit of a voyage to find what you want.”

So now I’m on Depop, Mercari and Etsy, looking for secondhand stuff because it helps fade the guilt of thoughtless consumption. I have no clue whether my orders are still just getting forwarded to some third-party vendor across the world. But at least I know it won’t be a throwaway shirt produced at the speed of the internet.