The Most Sinister Cigarette Promotion of All Time

In the mid-1990s, Heatherly was a teen who dreamed of escaping her dysfunctional family. Inspired by Soul Asylum’s “Runaway Train,” her fantasy included riding the rails to freedom and embarking upon a life as a train hopper. To make it a reality, she gathered as many Marlboro Miles as she could find. Luckily for her, her parents owned a bar so she was able to build quite a collection by salvaging miles from discarded packs. Over time, she was able to get her first haul of supplies — a Zippo, a leather backpack and the big prize, a red Fuji folding bike, which cost 2,200 miles, or 440 packs of cigarettes.

Heatherly admits that the project was a grim endeavor. “My lowest point was walking around looking for discarded cigarette packs on the ground,” she tells me. “I remember feeling really depressed as I cut out the UPCs and bagged them. Some were wet from being in the rain. I suppose I felt a high when I initially came across one, but then it was just sadness. I even resented it at the time. I was aware it was fucked up, but I was desperate and somewhat in a state of delusion.”

The origins of Heatherly’s resentment date back to 1970, when Richard Nixon signed legislation banning all tobacco advertising on radio and television, something that devastated the industry’s profits. By 1993, the adult smoking rate had shrunk from 42.4 percent of adults to 25 percent, and Big Tobacco was panicking. Philip Morris’ star brand Marlboro was in particular trouble.

Without the ability to run a massive advertising campaign, how could they build their brand? That’s when Marlboro had its light-bulb moment: It would skirt the ban through a “customer appreciation promotion.” Inspired by the Marlboro Adventure Team from the 1980s — an annual promotion in which you could win a trip — the company created an Adventure Team catalog. Customers could mail in their Marlboro Miles in order to get licensed Marlboro merchandise — everything from the aforementioned Zippos to outerwear and inflatable canoes. (Eventually, the program would go back to its Marlboro Man roots, and offer things like BBQ tools and cowboy cookbooks, rebranding as the Marlboro Country Store.)

Although there were other smoking continuity programs like Camel Cash, Marlboro Miles was by far the most successful, distributing over 14 million items its first year, a number that would reach 135 million by September 2006, which is when new government regulations that forbid campaigns incentivizing smoking went into effect. Maybe more importantly, Marlboro now has 40 percent market share, which is more than the next seven brands combined, a success that’s due in large part to the miles campaign.

Michael Quinn, a 49-year-old in New York, was in his early 20s when he and another bartender began collecting discarded Miles from drunk, chain-smoking patrons. “We had a jar by the register and just plopped them in every night, like tips,” he says. He and his coworker got numerous small items like water bottles and lighters, but the holy grail for the duo was matching windbreakers, a feat that was nearly impossible for an average smoker. They had to wait nine months to receive them, but it was worth it.

“We made a whole thing out of opening them in front of everyone at the bar and then parading around the rest of the night in fire engine red jackets that were supposed to make us look like mountaineers, but ended up making us more like the friendless wonder twins,” he laughs.

Looking back, Michael compares the experience to playing Skee-Ball at Chuck E. Cheese, taking forever to accumulate hundreds of tickets just to get a high bounce ball, while the prized samurai sword remains ridiculously out of reach. “You’d better enjoy the journey with these things, cause the payoff is always a letdown, and in this case, it’s hard to enjoy the journey when the most common path is to smoke even more cigarettes and accelerate chronic obstructive pulmonary disease,” he jokes.

The wild thing about Marlboro Miles was how many non-smokers participated in it, including the father of now 35-year-old Sean. He was just 10 during the height of his dad’s obsession, but Sean has numerous memories of the lengths his dad would go for an extra mile. “The most vivid is just him driving his truck around town doing errands, and when he saw a piece of trash that even remotely resembled a pack of cigarettes, he would STOP THE TRUCK, get out and pick it up,” Sean tells me.

The smell of tobacco that emanated from his dad’s pile of miles haunts Sean to this day. “I swear to god he collected miles for years, and all I remember him getting was a single windbreaker, which I don’t even remember him wearing,” he explains.

Although the prizes were ultimately underwhelming, the thrill of the chase was almost as addictive as cigarettes themselves. Zach, a ‘90s kid, began smoking in junior high and diligently collected his Marlboro Miles in a tin, the subliminal marketing working on him like a charm. “Seeing the Zippo lighters and the Marlboro Jacket, it just appealed to that rugged counterculture element that everyone I knew was attracted to at the time. It said, ‘I want smoking to kill me, because it will prevent my having to live through the worst years of my life.’ So hardcore.”

Zach collected for years before he could legally get something from the catalog, and when the program ended, he was left with thousands of unused miles. “You always wanted the next item up. It was a greater visible commitment to the brand, so you waited and collected more until you could get it,” he says. “So I was pretty dismayed that all I had endeavored for, for perhaps a decade, was ultimately pointless. There was an emptiness and disappointment in myself for falling for this fraud.”

Interestingly, a nostalgia-fueled desire for retro 1990s fashion by Zoomers and millennials has made Marlboro merch a highly sought after collectible and huge “get” in the streetwear scene. Even John Mayer got in on the trend recently: 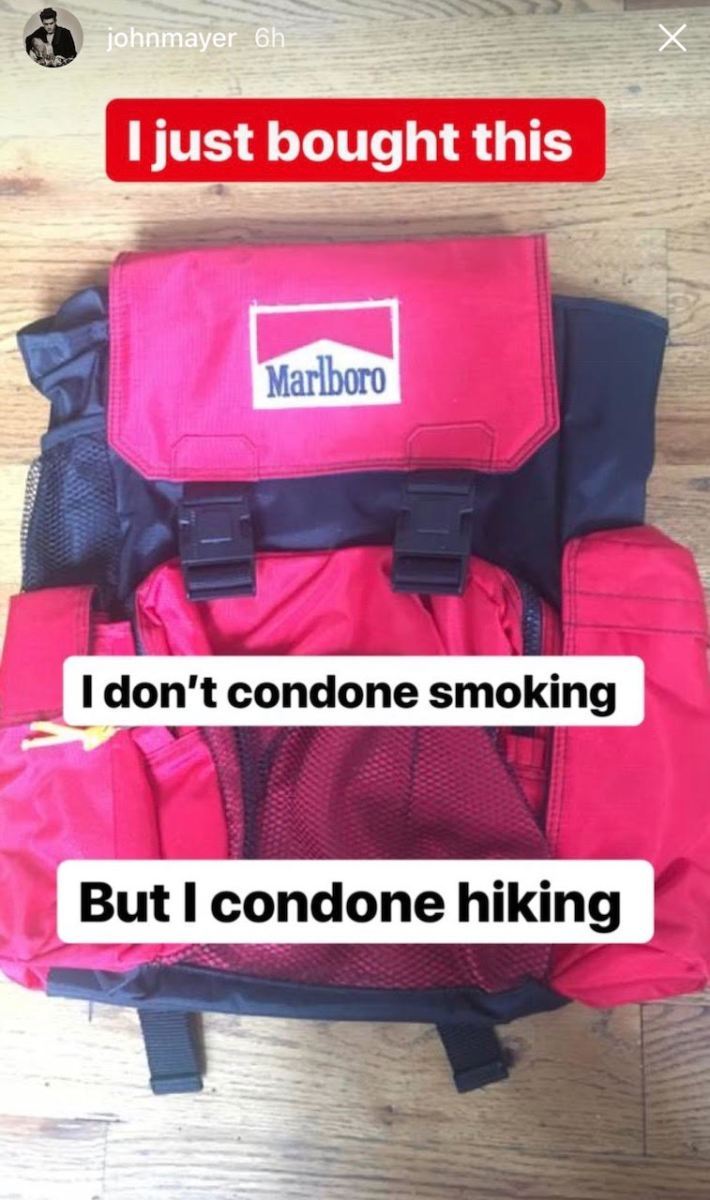 For Mark, a Marlboro collector in Seattle, the connection runs deep. His mom was friends with one of the OG Marlboro Men who was seen in commercials throughout the 1970s. What started off as a few pieces, kicked into high gear when he began working at a thrift shop. Now, Marlboro merchandise is a big part of his identity. In fact, in Seattle, he’s known as Marky Mark, the modern-day Marlboro Man. “One of my goals is to be the world’s biggest collector,” he says.

At a time when detached irony is king, what could be hipper than the rebellious nature of celebrating branding, especially branding so explicitly tied to corporations putting profits over people? Perhaps in a Juul-dominated world, Marlboro merch is once again allowing wearers to indulge in the fantasy of being someone who doesn’t give any fucks.

As for Heatherly, she now looks back on her “Runaway Train,” Marlboro-Miles-fueled dream of a better tomorrow with amusement. “For me, Marlboro Miles started off as a ridiculously unrealistic fantasy of escape, and ended with a bunch of useless junk that didn’t improve my life in the slightest,” she says. “All I can do is laugh at my younger self in hindsight. I was a real dumbass.”