The Song of the Quiznos Spongmonkey, the Weirdest Corporate Mascot of All Time

Love them or hate them, the Quiznos Spongmonkeys were so annoying they changed advertising forever. Here’s how a viral video turned into a terrifying sandwich ad

In 2004, 41-year-old Ty Harper was an experienced art director about to launch a major ad campaign based on an idea he had pitched to Quiznos. The sandwich chain said they wanted to get noticed, and he gave them exactly what they wanted: the Spongmonkey.

It was a simple concept. Harper had found a viral video featuring creatures called Spongmonkeys singing about their love of the moon. Why not have them singing about toasted subs instead? I mean, who could resist? 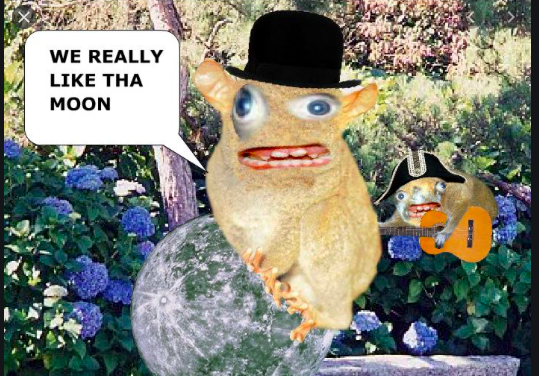 A lot of people, as it turned out. The backlash against the campaign was near instantaneous — and universal. “People were saying it was just a bunch of singing rats, and I was like, ‘Well, first of all, they’re not rats. If you look closely, they’re carefully constructed of seven different animals,’” Harper tells me.

His argument, however, was unconvincing. The Quiznos Spongmonkey frequently makes the cut on “all-time worst mascots” lists and advertising experts consider it a love-or-hate property (at best). The only thing everyone seems to agree on: How the fuck did these commercials come to be in the first place?

The short answer: beer. Lots and lots of beer.

Spongmonkey creator and animator Joel Veitch, 46, of Rather Good, says he and his brother wrote the song that would one day become an advertising earworm during a beer-fueled night in the U.K. “I was in the pub with my brother, and we were talking about how great the moon was while we got a bit tipsy,” he tells me.

They were soon back at home, drinking even more beer, when they got out the guitar and Veitch improvised some lyrics paying homage to the moon. The next day, he looked back at the video recording of the impromptu songwriting session and was shocked to find that he didn’t hate it. In fact, he was inspired. He had been working with some characters he called Spongmonkeys (Veitch was active on a British website called b3ta where “spong” — adding large eyes with small pupils to images — was a popular practice), and he put together a little animated video where his creatures sang his moon anthem. “We shoved it up on the internet, and, um, that’s how it all started,” he explains.

The video quickly went viral, reaching over a million views, which was quite a feat in the pre-social media and YouTube era. One of the people who came across it was Harper, who went down a late-night rabbit hole that led him to the work of Rather Good. He bookmarked the “We Love the Moon” video and left it at that. “I had no clue why I was bookmarking it, but I had a feeling that it would come in handy someday,” he says. “I was just mesmerized.”

A few months later, Quiznos approached his agency, the Martin Agency, to pitch a massive national campaign that would make a big splash. Harper knew just the thing to get the company noticed: Spongmonkeys earnestly singing about their love for subs. He and his partner at the time quickly rewrote the lyrics, keeping true to the lack of cynicism in the original. According to Harper, now 57, the lyrics came out effortlessly. “We were sitting there crying laughing, thinking, ‘No one’s ever gonna buy this, but boy, it’s a great way to kill an afternoon,’” he laughs. “We showed them to the creative director, and he just kind of took off his glasses and rubbed his bridge of his nose.”

But he went for it, and to everyone’s surprise, so did Quiznos — after a strategic pitch, that is. The Martin Agency showed Quiznos a video of college kids reacting to the “We Like the Moon” video, leaving them wondering what exactly had their target audience in stitches. Next, they showed the Quiznos suits Veitch’s video. The idea being that they’d now find it hilarious and not odd, which is exactly what happened. The only problem? They had to get Veitch on board. Harper remembers the email he sent to Veitch well: “I was like, ‘You’re not gonna believe this…’ I told him I worked in advertising and gave him the long story short, before asking him if he’d be interested. Luckily he said, ‘Yeah, that sounds great.’”

Veitch, though, was bewildered. Given that he was in the U.K., he had no idea what Quiznos even was. Nonetheless, he and his brother were quickly flown out to animate the ads as well as sing the new songs, which he sang all night until his voice was raw. The first commercial dropped soon thereafter:

Months later, Veitch was back in the U.K., working as an animator on a late-night TV show, and not really thinking much about the ads when they first began airing in the U.S. His email blew up immediately. “Nobody around me had a clue what was happening, it was all in another country for a brand they’d never heard of,” he says. Still, the reaction resulted in his website crashing when over a quarter of a million people went to check out his work.

Unfortunately, the backlash was just as swift. Within the first week of the campaign, Quiznos corporate received more than 30,000 calls complaining about the Spongmonkeys. Per a 2004 article from the Denver Business Times, an Alabama Quiznos franchisee even put up signs in his windows saying he wasn’t responsible for the ads, as they were turning away customers and making children cry.

In fairness, Aundra Madden, a 27-year-old in Canada, says she’s still haunted by the ads. “I was roughly 10 years old and in British Columbia visiting my dad when my young mind was molested by those absolute hell beasts,” she tells me. She first saw them after a long flight and was sure they were merely a jet-lag-induced hallucination. All these years later, it continues to be an inside joke between her and her dad: “He still jokes about taking me to Quiznos to see the road-kill monkeys EVERY chance he gets.”

Not that any of this bothered Veitch. “I just pictured them being seen in these Middle American living rooms — people who never had anything to do with internet culture,” he says. “We were just forcing that on everybody.”

Quiznos, of course, backtracked almost from the jump. “The client came to us and said, ‘Okay, you got us noticed, but we have to stop this,’” Harper says. “We basically won the account and lost the account on that work.” Still, he considers the campaign a success, and it remains the work that he’s most proud of today. “Here’s the deal,” he tells me. “In advertising, if you can influence culture in any way, you’ve done your job.”

As with most things from the early aughts, Spongmonkeys have become a nostalgia touchstone and even inspired some people to go into animation, which obviously delights Veitch and Harper. Veitch in particular says he’d happily participate in a Spongmonkey reboot. “Every now and again, there’s a sniff from Quiznos about whether they’d like to do it again,” he says. “It would be fun!”

After all, as more time has gone by, it’s become crystal clear that they’re not the true monster of sandwich mascots. That’d be Jared.