The flavor is mild, but it’s the experience of trying something you’d expect to find disgusting that’s so liberating

The first time I saw a lamb’s head, floating in a murky yellow broth the color of noodle soup, I was in grade school. I had followed the rich, oniony smell into the kitchen at my grandmother’s house, where the marble countertops were ornamented with cloudy plastic bags, indicative of a recent shopping haul from the local Persian grocery store.

Inside the cold, metallic sink sat a strainer filled with six or seven lamb’s feet, completely shaved, revealing their smooth, pale-pink pigmentation. Opposite the hooves, protruding from the ankles, was the sight of leg bones, cracked asymmetrically, as though they’d been done by hand.

For a kid born and raised in the U.S., the gamey smell that accompanied one of Little Bo-Peep’s sheep, snapped into pieces, caused my stomach to ripple with nausea. “There’s no way I’m eating that,” I told my grandmother as she hovered above the cauldron of tainted liquid, a sheep’s knuckle bobbing to the top.

The dish, as I would later find out, is called kaleh pacheh. After some fuss, I tasted it, and to my surprise, I liked it. But more importantly, the experience of tasting food that looked and smelled disgusting by American cultural standards began to change my sensibilities around food that’s visually and texturally un-American. That day helped unshackle my palate from a Western purview, one that so often regards Eastern gastronomy as gross and less civilized than its own.

This is all to say that when I recently heard that a bunch of penis fish — a popular South Korean snack referred to as gaebul (which translates as “dog dick”) — had landed on the shores of Northern California, I was curious to find out what they tasted like.

Also referred to as “the fat innkeeper worm,” Urechis caupo — as the penis fish is known to marine biologists — is a type of spoon worm. Uprooted by a storm, these penis-shaped fish — and creators of underwater tunnels that provide shelter for crabs — washed up en masse at Drakes Beach, about 50 miles north of San Francisco, in December 2019. Thanks to that storm, the shore appeared as though a mass castration event had eclipsed the sandy beach.

Overtly phallic and coated with a slimy exterior that’s texturally similar to the grain of a human tongue, the penis fish doesn’t immediately make sense as a food (although, neither does the American hot dog). But in South Korea, gaebul has historically been amongst the foods that are deemed to be “good for men.” From dog meat stew (bosintang) and eel soup to everyday foods like garlic or chives, these ingredients are recommended for their ability to enhance male sexual performance, writes journalist Crystal Tai in her article for Quartz on the changing perceptions of “manly foods” in South Korea.

“Across Asia, ‘stamina food’ has been a long-standing concept in many cultures,” Tai tells me. “While there are foods there considered healthy and good for women (i.e., pomegranate), perhaps due to patriarchal norms, there are a lot of male-centric foods like snake wine, ginseng, animal testicles, etc.”

Specifically, Tai — whose forthcoming book, Honjok, is all about South Korean culture and society — says that the phallic shape of the gaebul is largely responsible for its reputation as a natural Viagra. “I suppose the length and girth appeal to some men in an aspirational sense,” she says. “The act of eating it raw, much like the thrill of eating raw, writhing octopus in parts of Asia, also comes across as quite an exciting homosocial bonding activity.”

Tai adds that traditional Eastern medicine has also influenced the value of “stamina foods” like gaebul that are seen as health and virility boosters. “I would think that the associated status of these foods — how much they cost, how hard they were to procure, plays into how sought after and valuable they are,” she adds. (Here in L.A., a plate of gaebul from a restaurant goes for around $25.)

But Tai also says that younger generations are less onboard. For instance, she tells me that dog meat, which was traditionally held as a virility booster for men due to its “heaty properties” — a concept from traditional Chinese medicine that represents the balance of yin and yang (hot and cooling) — is becoming less and less popular. “The rise of the pet industry, as well as the perceived outdatedness of these foods and associated gender norms, has seen younger Koreans pass on or reject these foods,” says Tai.

Nonetheless, this pink-to-light-brownish spoon worm species — which reaches a length of 4 to 12 inches — remains a delicacy, and though available year-round, gaebul is sweetest and plumpest from December to March. As food editor Matthew Kang notes during his trip to Jagalchi Market in South Korea, gaebul is typically part of a traditional raw food meal in Korean cuisine known as hoe (pronounced heh). Koreans, according to food blog Sunny Side Circus, “usually eat gaebul raw — and still wriggling — together with sesame oil and salt or Gochujang.” 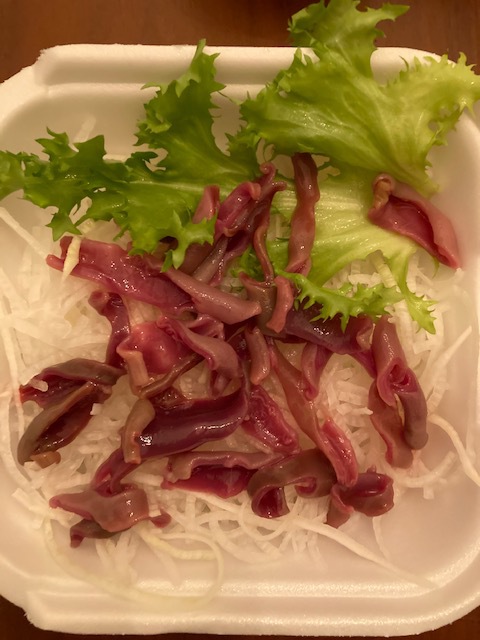 For people who don’t like the raw consistency, it’s also possible to skewer the spoon worm and grill it with salt, pepper and sesame oil. To my surprise, finding a restaurant that sold gaebul in L.A. was easier than I expected — a quick search on Yelp revealed a few different restaurants in Koreatown that served it up. Though it does occasionally come cooked, the Korean restaurant I ordered from let me know over the phone that they serve gaebul, “uncooked and cut into small pieces.” (They also said it’s a fairly popular dish amongst their customers, but admitted that he was surprised that a non-Korean person had called to place the order.)

Having never tried penis fish before, my initial reaction to the texture was that it was very similar to that of pig ears — tough, chewy and a bit difficult to break down. The thin 1- to 2-inch slices sort of snap when you chew them and some pieces were quickly jammed between my teeth. 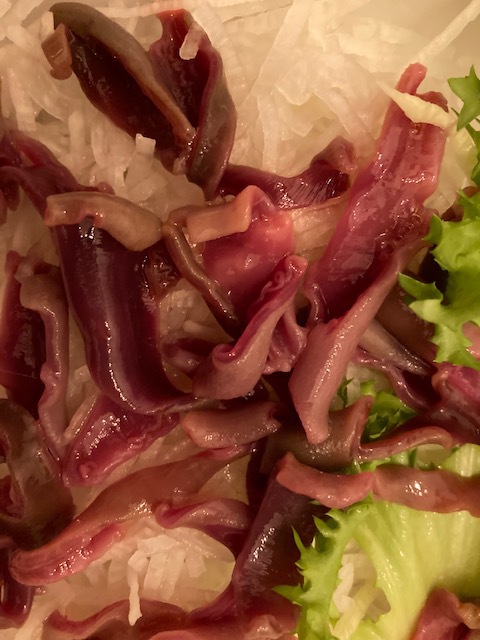 Regarding the scent, I couldn’t really smell much of anything, which is usually a good indication of freshness as it pertains to seafood. But the flavor, too, isn’t particularly intense — in fact, I had to eat three or four thin slices of gaebul before deciding that its taste can best be described as slightly sweetened saltwater. According to Korean cooking blog BBuriKitchen.com, “The best word in Korean to describe this sweetness is dalchakjigeunhada (달착지근하다), meaning a kind of natural, mildly pleasant sweetness that you’ll often taste in seafood.” Though they also note that the typical flavor of the gaebul from restaurants may be a little less sweet, “since it’s rinsed in tap water there.”

By the end of the plate — which came with 15-20 pieces of gaebul, served on a bed of thinly sliced daikon — I found myself increasingly needing to dip the gaebul in soy sauce, if for no other reason than to add a bit more flavor. To my surprise, however, the texture, which at first I found slightly unappetizing, grew on me. The penis fish had slowly but surely found itself yet another fan — albeit a mild one.

For years, food and content around food have become the cultural peephole through which the West has come to appreciate the traditions of other, far-off Eastern cultures. The penis fish, for me, was a good reminder of how valuable it is to occasionally have my gastronomic ignorance cracked in half. It comes too, serendipitously, at a particularly contentious time: Though food has always been the perfect cultural touchstone to help excavate a foreign tradition, it’s also a wedge, one that easily lends itself to being retooled as a way to belittle a foreign community.

Remember, it was only a few months after the penis fish washed up on the shores of Northern California that the news media in this country found itself obsessed with finding a scapegoat to blame for the carnage that had only just begun to unravel. One of those since debunked rumors was the theory that COVID-19 began when “Patient Zero” consumed bat or pangolin meat at the Huanan Seafood Market in Wuhan, China. “China is to blame,” Republican Senator John Cornyn said of the virus. “Because the culture where people eat bats and snakes and dogs and things like that.”

His message, shared by millions of Americans, is one of disgust. I know, because it’s a feeling I’m familiar with. In fact, the only difference between Cornyn and I, in this sense, is that I was lucky enough to have people in my life who insisted that I taste the sheep’s head stew before determining how I felt about it. And that has made all the difference.