Nobody Knows What to Do About NEETs

They have no job, no school, no prospects — and a subreddit that makes it all worse

That blank might be filled with “a steady job,” or “my degree program,” or “someone I love to ride it out with.” Amid collapse and deprivation, we’ve all clung to whatever we still possess. But what happens to the people who look around and say, “I have nothing?” More than 23,000 have pulled together on the subreddit r/NEET, created back in 2010, to discuss their predicament.

NEET stands for “Not in Employment, Education or Training.” These are individuals in their mid-20s or older, adrift in life, often living at home with parents. Some are struggling to integrate into society because of past trauma, mental illness or disability; others sound more like Herman Melville’s fictional scrivener, Bartleby, who flatly refuses to do anything on the grounds that he “would prefer not to.” If you call yourself a NEET, you spend plenty of time on the internet, because the term really doesn’t exist offline. You may also devote significant hours to gaming. The Reddit forum is filled with depression memes, anime references, weary Wojaks, suicidal Pepes and other hallmarks of a 4chan culture. It is, overall, a rather dismal place.

In their most common traits, the collectivized NEETs can be thought of as a Western analogue to Japan’s hikikomori — a “lost generation” that withdrew from society and never left the safety of their childhood bedrooms — and some use “hikki” and “NEET” interchangeably, or in hybrid form. Others draw a sharper division, insisting that whereas hikikomori are severely agoraphobic, NEETs are not opposed to going outside (at least in theory). What matters is that similar conditions seem to give rise to either lifestyle: Japan’s economic stagnation in the 1990s and the Great Recession in 2008, the stigma of failure in a capitalist system, a failure to recognize and make accommodations for autism spectrum or anxiety disorders, lack of job opportunities and/or social services combined with the material wealth of middle-to-upper-class families that can support a younger unemployed member indefinitely.

The “NEET” designation, like hikikomori, presumably encompasses a roughly even gender split. But as shorthands, both tend to refer to males, and in the U.S., participation in the labor force by men of prime working age has been declining for years. More relevant here is that communities such as r/NEET are male-dominated. If you’re a woman posting there, you must not appear to be a woman. 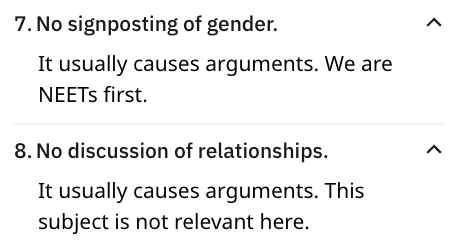 Running a gender-blind subreddit feels, at first, like good-faith moderation: This is a board for talking only about a socioeconomic issue. But that attempt to cleave away identity from status is fraught and ultimately rather naïve. Who you are creates the very set of expectations and obstacles that will shape your life. Calling attention to one’s gender or romantic relationships “causes arguments” because the NEET hub lies in perilous proximity to misogynist elements of the manosphere. You can locate this undercurrent even in the efforts to control the conversation and prevent the subreddit from getting banned. Three months ago, a mod wrote a lengthy post clarifying rule number three, which forbids “incel” posting, or complaining about a lack of sex.

“I can recognize,” he wrote, “that most of our posters here are men and are also largely sexless due to being NEET, a social outcast or other perceived shortcomings; so a lot of us happen to meet the description (as I also do, frankly).” But, he continued, incel-style commentary would ultimately bring down the forum. While arguing the irrelevance of gender or relationships on r/NEET, he not-so-slyly indicated his own position: “Yes, women can be NEETs regardless of their perceived options. […] That said, women do not help themselves by signposting their gender here and riling up the men with their comments.”

To the members’ credit, this assignation of blame did not go unnoticed. “It appears I have still managed to totally outrage the feminist/SJWs anyway,” the same mod wrote in a follow-up comment on the now locked thread, clearly miffed that his most careful diplomacy still had more than a whiff of bitter sexism to it.

That women could be labeled troublemakers just for outing themselves as women — while the men are vaguely chided for incel content yet not held responsible for attacking the opposite sex wherever they appear — is a serious problem for a board that aims to maintain other kinds of decency and decorum. Ableism is prohibited, as is, technically, suicide posting, and users are directed to “keep any politics non-partisan,” the latter not too hard for a voting bloc more apathetic than anything.

Unlike these other guardrails, the sex and gender ones skew the subreddit toward a default male perspective, as women can immediately see that they’re not exactly welcome without strict self-censorship, while men can give away their gender without a second thought, as every post is assumed to be from a man anyway. Worst of all, it is the extremely online men, whether NEET, incel or both, who always turn out to be most invested in defining and mythologizing these categories, digging themselves into deep, dark holes.

Many NEETs say they are trapped or paralyzed, and they share heartbreaking stories of how they came to be cut off from traditional avenues of fulfillment. Some continue to blame themselves and lament the choices that brought them here. However, the pervading capitalist critique — that surviving as a low-paid “wagecuck” is in some ways more demoralizing and shameful than remaining a NEET as long as possible — allows them to frame their inactivity as an explicit rejection of the unfair status quo. As the gaps on their résumés grow, the less likely they are to qualify for jobs besides the ones they deem humiliating or “beneath” them. (The perennial examples are entry-level positions at grocery stores or fast food restaurants.)

This reinforces their politicized conviction to stay out of the workforce and celebrate the numbing comfort of NEETdom, where you have nothing but free time and little is demanded of you. It’s not rare for a former NEET, several weeks into a new job, to yearn for the endless days of sloth.

One can certainly be sympathetic to any person suffering the indignities of late capitalism, and trying to avoid work is a supremely relatable impulse. Nevertheless, digitally active NEETs have come to echo the assumptions of toxic male in-groups, and any guy who does call out an anti-feminist streak in the discourse is shouted down as a “simp,” “bitch” and “gigacuck.” Meanwhile, not a few NEETs are following the incel trajectory toward the helpless nihilism of the so-called “black pill,” where you accept that you will be an undesirable loser forever, quit looking to improve your circumstances and devote yourself instead to expounding on the defeatism that robbed you of agency in the first place.

The causes of the NEET phenomenon are head-spinningly vast and complex, but semi-exclusionary networks like r/NEET can decide they are brutally simple and fashion the victim narratives they prefer. The toughest thing is that people are marginalized, overlooked and left behind — but most NEETs still have a safety net, some form of privilege that has held them out of direct peril and the mildest inconvenience. “I’d rather die or be homeless than live with normie roommates,” reads one revealing post.

Nobody knows what to do for NEETs, who on the policy level have barely registered as a contingent in trouble, but it’s safe to say that their venues for commiserating are trending in the wrong direction. The advice and encouragement is minimal; elsewhere, they are raging at the world, despairing as it passes them by and speculating on when they’ll have to kill themselves.

As if that weren’t bad enough, they are also increasingly committed to the dogma that NEET existence is their destiny and evidence of fundamental character — that they were born to be a waste of space. Once someone thinks they’re worthless, they don’t want to be saved anymore.