The High Price of Being the First Male Scream Queen

The hotly anticipated sequel to ‘A Nightmare on Elm Street’ was poised to launch Mark Patton’s career. But because of the movie’s homosexual overtones, it ended up destroying it.

Horror is a genre that likes to put women in peril. In particular, the “Final Girl” refers to the trope of the last vulnerable woman alive to confront the killer. You’ve no doubt seen it: A terrified yet courageous heroine, pursued by a masked villain, who trips and falls as the monster nears, inching terror-stricken audiences to the edge of their seats. She’s featured in nearly every horror film of the late 1970s and early 1980s — from The Texas Chain Saw Massacre, to Halloween, to Alien, to Friday the 13th.

And, of course, for every shrieking Final Girl, there’s a monster stalking her (Michael, Jason, Pinhead, Chucky, Leatherface et al). But none was scarier than Freddy Krueger from A Nightmare on Elm Street, a living phantasm capable of slashing kids in their dreams. Krueger’s grotesque face, scarred and deformed from being burned alive by parents in retribution for killing their children, was minaciously complemented by a sinuous tongue and his weapon of choice — a metal-clawed brown leather glove worn on his right hand. The glove is immortalized in an iconic bathtub scene, slowly emerging between the legs of Nancy Thompson, the original Nightmare on Elm Street Final Girl — and the first to stand up to Krueger and survive.

The gruesome flick became the first major hit for New Line Cinema, which quickly jumped into production on a sequel. But Nightmare on Elm Street 2: Freddy’s Revenge wasn’t a fan favorite, as it deviated greatly from the original storyline. “I just wanted to do something different,” says David Chaskin, screenwriter of Freddy’s Revenge, who resisted making yet another slasher movie. Instead, the sequel brings Krueger out of the dream world and into the body of a sensitive teenage boy, Jesse Walsh. “Nightmare 2 was a possession movie,” Chaskin explains, adding that he especially liked the concept of “an innocent person being invaded.”

Or as Freddy Krueger himself, Robert Englund, puts it, “We had a sensitive male lead instead of a typical macho teen boy. This nerdy, sensitive kid became the equivalent of our heroine in jeopardy in the original.”

Unfortunately, that kid — played by a babyfaced blond heartthrob from Missouri named Mark Patton (who’s gay IRL) — was instantly mocked by critics and devout Elm Street fans alike for “screaming like a girl,” leading to the sequel becoming the most maligned film in the Nightmare franchise.

When I ask Patton why he screamed like that, he says he was just doing his job. “I read the script and thought, This is what I sound like when I’m afraid,” he says on the red carpet of Scream, Queen! My Nightmare on Elm Street, a documentary about Patton’s experience that screened at Outfest Los Angeles in July. “I was a young actor following directions and didn’t realize what I sounded like until it tagged me as a homo. As a man in 1985, there was an understanding that the one thing you should never be is weak, and Jesse was very weak.”

A gay subtext woven throughout Nightmare 2 — including gratuitous bulges, an S&M leather bar and a coach’s naked ass being mysteriously smacked by a towel in a shower — didn’t do Patton any favors either. Nor did an impromptu, Risky Business-inspired dance scene featuring Patton shutting dresser drawers with his butt, or the art department hanging a “No Girls Allowed!” sign on Jesse’s bedroom door. “There were actual props and winky signage in the film that made it pretty clear that this is a gay kid,” says Peaches Christ, a 45-year-old drag performer featured in the documentary who tells me she thinks it was an especially big turn-off for young straight horror fans. “The mainstream public wasn’t ready for a male scream queen. I remember my neighborhood guy friends not liking the scream, the male nudity or all the gay stuff.”

On the flip side, Roman Chimienti, who co-directed Scream, Queen! with Tyler Jensen, watched Nightmare on Elm Street 2 at a slumber party as a gay kid and recalls being totally engaged. “But I do remember the other guys weren’t quite as impressed with it,” he tells me. “They missed the screaming girls; Nightmare 2 didn’t really have any of that.”

You’d be hard-pressed to think of one example of a male survivor in a horror film who isn’t hyper-masculine, including Final Girls, says Andrew Scahill, an assistant professor of English at the University of Colorado, Denver who specializes in film studies. “It goes hand-in-hand with it being okay for a girl to be a tomboy, because of course she’d want to be more like a boy. But there’s really no equivalent for men, where it’s okay to be a Nancyboy for a while and explore your femininity. Because we can’t accept in our culture that a boy will be at any point unphallusized.”

“But,” Scahill continues, “do audiences not accept it, or is just Hollywood failing to provide those images for us to rethink gender?”

There have been male leads in horror movies before, notes Michael Varrati, host of San Diego Comic-Con’s Queer Fear Panel and Dead For Filth, a podcast at the intersection of queer identity and horror. “But they came with the knowledge of how to defeat the monster. Look at the Hammer films of the 1960s and 1970s. Peter Cushing is often the wizened professor who fights back against the monster. In Jesse’s case, he was shown as sensitive, and people weren’t ready for that, which seems foolish. But it’s the kind of toxic masculinity that we place on boys.” Still, he adds, “Even though there was a willing disconnect with Jesse as a Final Boy, there were also as many of us who saw him and thought, Wait, this guy is me.” (“I secretly watched it on repeat, over and over again, not realizing that part of my attraction to it was its queerness,” confirms Peaches Christ.)

“For a lot of us, that was the first time we’d ever seen a gay bar,” Scahill tells me. “I remember this and Police Academy as two places where I was like, Oh wow, gay bars exist?!?!” Though, he adds, in both Police Academy (with straight guys trapped inside of it) and Nightmare on Elm Street 2 (where Jesse encounters his gym teacher), they were depicted as places you definitely didn’t want to be. “Exploring this film now, and what happened to Mark Patton, makes for some interesting subtext to explore how queer spectators watch the same film differently than straight people,” he says.

Regarding that subtext, Patton explains, “It became crystal clear to me when we were doing the scene on the stairs, which was essentially a love scene.” 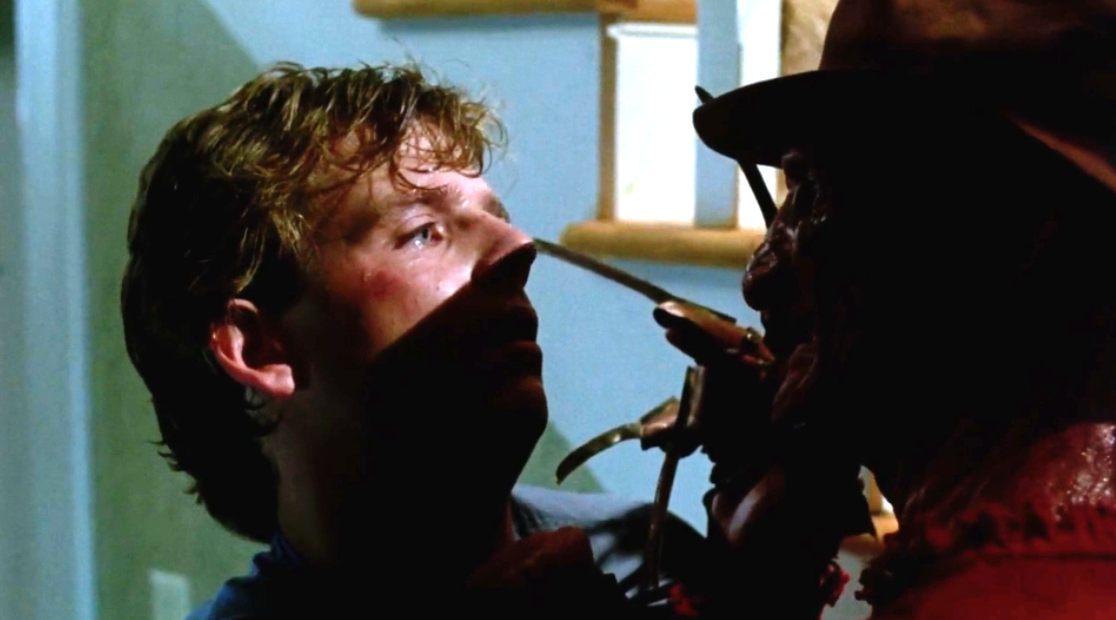 “I remember caressing Mark’s face and asking him if I could make it homoerotic,” recalls Englund, adding that in one of the takes he rimmed Patton’s mouth with his claw. Afterward, a makeup artist came running onto set, screaming that Patton needed a touchup, before whispering to Patton, “Don’t you dare let him put that blade in your mouth, it’ll look like you’re blowing him.”

Even that, though, doesn’t make it a complete slasher outlier. Queer theory is intimately linked to horror films, Scahill explains, noting it to be another example of reinventing the bogeyman. In films of the 1930s, featuring classic movie monsters like Dracula, Frankenstein and King Kong, the monster always came from somewhere else to threaten the heterosexual male and needed to be pushed back down. Alfred Hitchcock utilizes homosexuality in both Rope and Strangers on a Train. More recently, the sinister, top-hatted monster from the 2014 horror film The Babadook, from Australian writer and director Jennifer Kent, has curiously been heralded as a gay icon.

It’s important to note that in 1985, life for gay men was more terrifying than anything found on the big screen. By the time Freddy’s Revenge opened, the AIDS epidemic had consumed headlines and became a bogeyman for an entire generation — including many Hollywood stars. For instance, Rock Hudson, the quintessential leading man, had not only been outed as gay by the press, but his tragic death from AIDS in 1985 ignited a full-fledged witch-hunt by gossip rags like the National Enquirer to expose anyone thought to be in the closet. “You can’t help but make a connection to the horrible epidemic that was arising in 1985,” Peaches Christ says. “Which is so gross, because who was going to see horror movies in record numbers? Young, straight boys. What could they really be afraid of? Gays and AIDS, of course.”

Patton’s own lover, Dallas actor Timothy Patrick Murphy, died of AIDS in 1988. “There were people asking me to live in the closet while all these people were dying around me. I was having a nervous breakdown and decided I just didn’t want this. So I made a choice.”

Thus, Patton bailed on his acting career and moved to Mexico, where he lived in obscurity for 25 years, until the directors of a different Elm Street documentary hired a private investigator to track him down. Patton agreed to tell his story under one condition: That he get to confront Chaskin and make him admit that he’d written Freddy’s Revenge as a gay movie. (Chaskin had repeatedly blamed Patton for being “so gay that he ruined the movie.”)

The confrontation is included in Scream, Queen! “Maybe it was a little exploitative, but you know, that’s what movies did,” Chaskin explained while asking for forgiveness. Patton graciously obliged, explaining that had he not, he would’ve become the bully.

These days, Patton tours the country on the horror fan convention circuit, grateful to have “a rock to stand on and a story to tell.” “My generation is gone,” he says. “I have no friends my age. The world has changed since 1985, and you know why? Because of people like me who stand up and tell their story. And I’ll be goddamned if I’ll let it happen to another person. I want them to at least hear from somebody that the way the world is now wasn’t this way five minutes ago. We need to keep telling them, because if we don’t, there are a whole lot of people who would like to put us back in a box where they think we belong.”