I Ate Mac and Cheese for Breakfast for a Week. Here’s How It Went.

I spent a week eating the stuff for breakfast, and, guess what, the world didn’t end

A couple of weeks ago, Kraft announced that it would be rebranding its boxed macaroni and cheese as a breakfast food. They tried to make it all about the pandemic, saying in their official statement, “These last few months have not been easy, and the struggle is real for parents with kids who are picky eaters.” They also shared the results of a survey, saying that “56 percent of parents have served their kids Mac & Cheese for breakfast more often during COVID-19-related state lockdowns than previous months.”

As a parent myself, I certainly agree that the past few months have been tough, but it’s fairly obvious that this whole campaign is nothing more than a Kraft marketing scheme to sell more mac and cheese. Still, I must admit that my junk-food-loving interest was piqued by the idea, so I spent a week starting my day with a hearty bowl of glowing-orange macaroni to see if it was indeed the way to start the day off right.

My breakfast routine is one that’s always in flux. As of late, I’ve been trying to lose a little weight, so I’ve been making Starbucks-style egg bites at home, but it’s not unusual for me to have cereal, pancakes, waffles or an egg sandwich. Still, I’ve never really ventured outside of what we designate as “breakfast food” here in the U.S.

Given that, as I boiled the water for the first day of this adventure, I was made uncomfortable by the idea of eating mac and cheese so early. I couldn’t quite figure out what my dread was all about, other than the idea that I was “breaking breakfast” by having something other than those handful of foods we’ve designated for the meal.

The whole preptime took about 20 minutes, which isn’t bad for a breakfast food. That’s about as long as it would take to make pancakes or bacon and eggs, so macaroni and cheese isn’t that hard to make when I’m trying to start work on time. 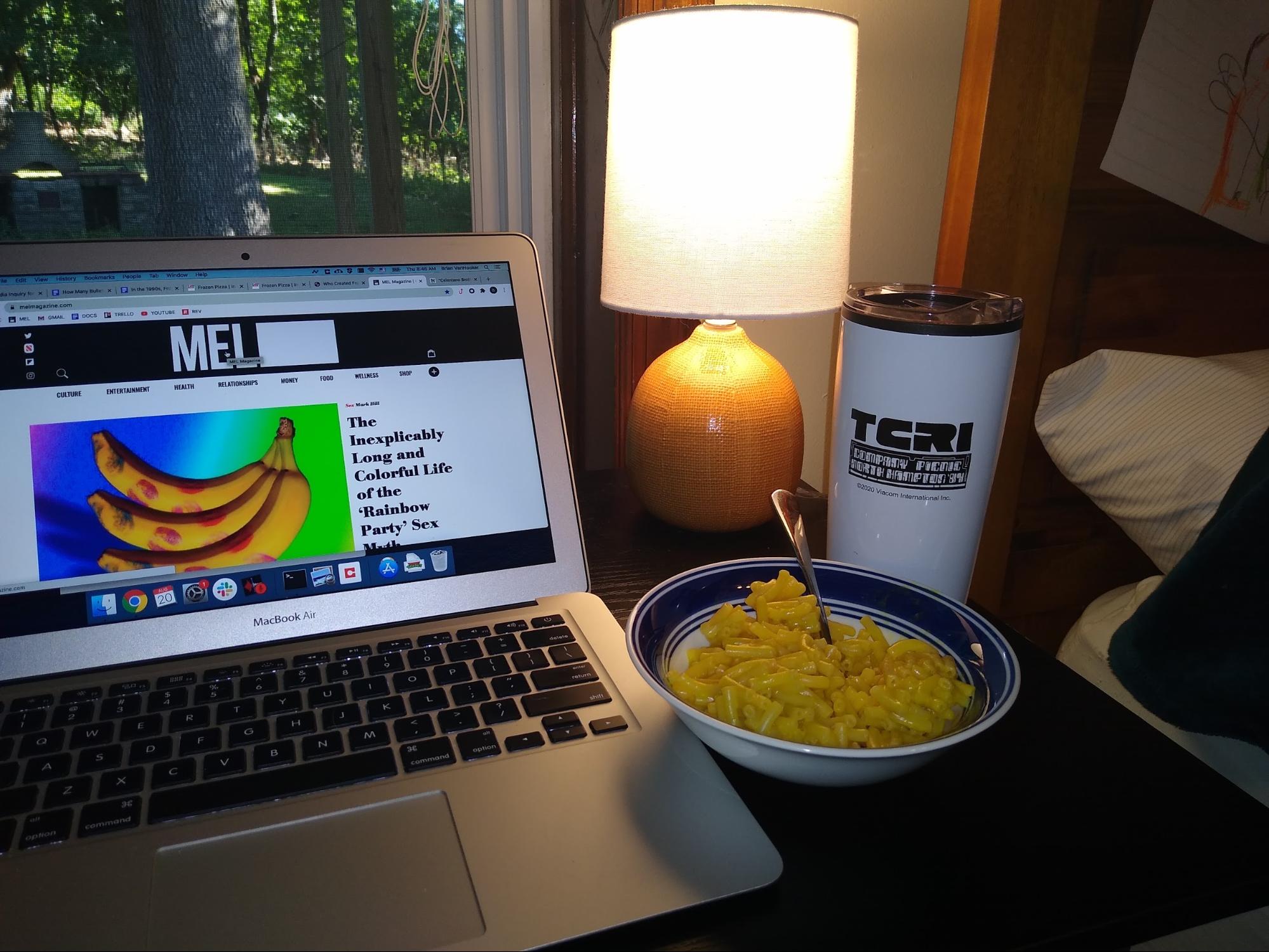 As I sat down for breakfast at my computer, the first bite did seem strange, but within a bite or two, I was over it. My biggest concern was how it might taste with coffee, but it was completely fine with my normal cup of cold brew. This might be different for hot coffee drinkers, or those who don’t drink coffee all day long — as I do — but gooey cheese and coffee gave my taste buds no adverse reaction.

The next day was even easier, as I just microwaved the leftover mac and cheese from Day One. That also cut my prep time to about three minutes, which is downright awesome for a quick breakfast. There were no other anxieties this go-around either, as I scarfed down the bowl without hesitation.

Later in the day, I spoke to Heather Arndt Anderson, author of Breakfast: A History, to find out why it is that we have such a strict definition of breakfast food in the first place. While there were many reasons, she said that there were three primary factors. The first is time. That is, breakfast food has to be fairly quick to prepare, so frying up some eggs or pouring a bowl of cereal are ideal because you can squeeze that in before darting off to work.

Another reason for our restrictive breakfast palette is historical, as Arndt Anderson says that foods like pastries used to be limited to the wealthy, particularly in England, but as these kinds of foods became more mainstream, the lower classes adopted them into their morning routines as well.

The last big reason is marketing, as Arndt Anderson explains, “In the late 1700s, there was a clean living movement that led to a lot of whole grains and cereals taking hold as breakfast food throughout the 1800s. In the early 1900s though, the company Beech-Nut — who, back then, were makers of bacon and ham and things like that — paid a guy to essentially convince Americans that bacon and eggs were breakfast food.” The campaign, of course, turned out to be a resounding success, as it still shapes our idea of breakfast today.

Honestly, I totally forgot about making mac and cheese for breakfast. It was a Saturday morning and I had family over, so I made everyone bacon and French toast. I was most of the way through eating my meal when my wife asked me, “Weren’t you supposed to have macaroni and cheese?” I wasn’t about to boil up a pot then, as I was already pretty full, but it occurred to me that, even if I do accept mac and cheese as a breakfast food, it’s still going to take a lot for me to reprogram my brain on the matter.

On Sunday, I got back on the mac-and-cheese breakfast wagon without much fanfare. I had to boil a new pot, so I started cleaning my kitchen as I made it. Once it was ready, mac and cheese passed another test important for breakfast food: I could eat it while doing other stuff. I munched down on a spoon at a time as I continued cleaning the kitchen. By now, this was starting to feel kind of normal.

I also spoke to nutritionist and personal trainer Sean Salazar, owner of Anywhere Gym, to get his opinion on mac and cheese as a breakfast food. The first thing he pointed out was that, though it’s not nutritious, it’s better to eat such carb-heavy meals earlier in the day, as you’re more likely to burn off that energy than you are if you eat them for dinner.

Salazar also took the time to compare the meal to another carb-loaded breakfast staple, pancakes. “I pulled up the nutrition facts on Kraft Mac and Cheese and compared it to Krusteaz boxed pancake mix. The serving sizes are different, as the pancakes say half a cup while mac and cheese is one cup. If you even those out, though, and have a full cup of pancakes, it would be 420 calories, compared to 280 calories for the macaroni and cheese. Mac and cheese is pasta, so you expect it to be high in carbs, which it is at 50 grams, but a cup of pancakes is 90 grams, so it’s a lot more. The fat is a bit worse, as it’s five grams for mac and cheese versus three grams for pancakes. The most surprising thing, though, was the protein, as mac and cheese has 10 grams of protein, whereas a cup of pancakes has just eight grams of protein. Ten grams is still not quite enough protein for a kid, as you’d want them to have closer to 20 grams of protein for breakfast, but the fact that it’s 10 grams is better than I thought,” Salazar tells me.

To be clear, Salazar would not recommend mac and cheese as a nutritious breakfast, but he did say, “When compared to pancakes, macaroni and cheese would be a better choice.”

After I had my morning bowl of orange, I decided to do an informal survey of Kraft’s key demographic for this meal — kids. So I turned to my daughter and niece, who we had over for the week, and asked them what they thought of the idea of macaroni and cheese for breakfast. My daughter, who is five, at first said “no thanks.” However, she quickly changed her mind. When I asked her why it sounds good for breakfast, she simply said, “It just does.” My niece, who is four, also approved of mac and cheese for breakfast, and when I asked her why it sounds good, she also said, “It just does.” I’m glad we cleared that up.

For Salazar’s kids, he tells me, “I asked my kids about what they thought about mac and cheese for breakfast, and all three of them — who are 14, 11 and six — said ‘no.’ Though my oldest one thought that he might be able to make a good breakfast sandwich out of it.”

Arndt Anderson, on the other hand, says, “I’d like to go on the record as saying that I think macaroni and cheese is an excellent choice for breakfast. My kid usually eats something like that for breakfast every morning — like leftover fried rice, spaghetti or mac and cheese.” She adds that eating leftovers for breakfast is more common in other countries and that it used to be more common here before we were all “brainwashed by marketing.”

So that’s three kids that are “pro” mac and cheese for breakfast and three against, meaning that Kraft still has some work to do with convincing kids about this.

This was the ninth wedding anniversary for my wife and I, so I decided to surprise her with breakfast in bed. I briefly considered making her mac and cheese, but I wisely reconsidered. Instead, I made her an omelet accompanied by toast with jelly. She enjoyed her breakfast as I somewhat scornfully ate my bowl of Kraft Mac and Cheese, also in bed. For my last day of macaroni and cheese for breakfast, I again microwaved myself some leftovers. I don’t see adding macaroni and cheese to my regular breakfast rotation, but there’s truly nothing wrong with it. Sure, it may not be terribly nutritious. The same, though, can be said of pancakes — i.e., there are certainly worse choices a busy parent can make for their kids at breakfast time.

Or as Arndt Anderson puts it, “There will always be a place for leftovers at the breakfast table. While it might seem transgressive to have cold pizza or macaroni and cheese for breakfast, it’s not far off the mark historically to eat what you already have.”

And pretty much every parent I know always has a box of Kraft Mac and Cheese somewhere in their kitchen.