Lenora Claire is stepping up where the First Family hasn’t: Trying to fix our woeful anti-stalking legislation

In 2011, a man named Justin Massler (a.k.a. Cloud Starchaser) started stalking media personality, art curator and casting director Lenora Claire after she was named one of L.A. Weekly’s People of the Year. He wasn’t coy about it, either — he showed up to one of her gallery shows wearing a spacesuit and point-blank told her she was going to be his next victim.

Claire didn’t know it at the time, but Massler was already a notorious stalker, having just been incarcerated for following Ivanka Trump and threatening to kill himself in one of her jewelry stores. According to an interview Claire gave to 48 Hours, he’d actually jumped bail from the Trump incident and come straight to her show in search of fresh prey.

At first, Claire brushed him off — the space suit didn’t exactly scream “take me seriously,” and being in the creative world, she had a “high tolerance for art and pranks.” Things changed when he started sending her bizarre, handwritten notes that escalated into explicit death and rape threats over email and social media. 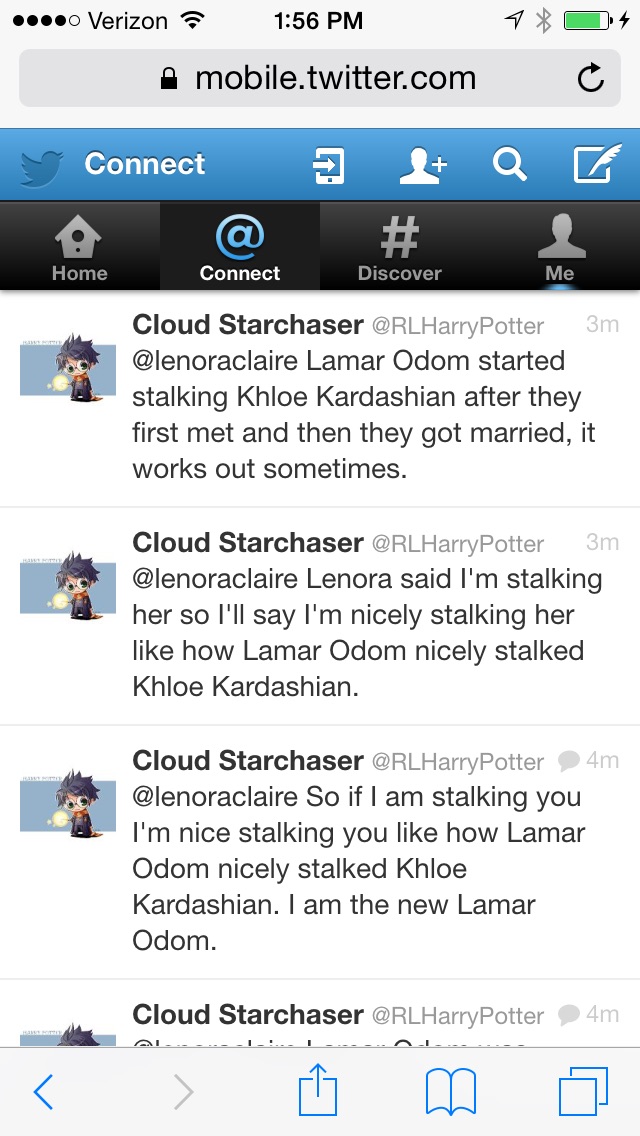 In an email Claire shared with me, Massler writes to her with the subject line “Lenora don’t make me have to gas you with Zyklon B.” In it, he claims to be the “Jewish Messiah” and threatens to torture her with deadly chemicals if she doesn’t acknowledge it. In another, he changes his tone, asking her to marry him because she’s the “real Jessica Rabbit.” He compares himself to Jesus Christ and outlines his plan to “tittyfuck” her.

In the span of seven years, Claire has received more than 4,000 pieces of communication like this from Massler, including a number of obsessive websites and blogs dedicated to her, some of which suggested she be put on a “rape list” (she’s since had them taken down). Massler even traveled to L.A. to leave notes at places she frequented, telling the staff he was looking for her. She never once replied to any of his messages. 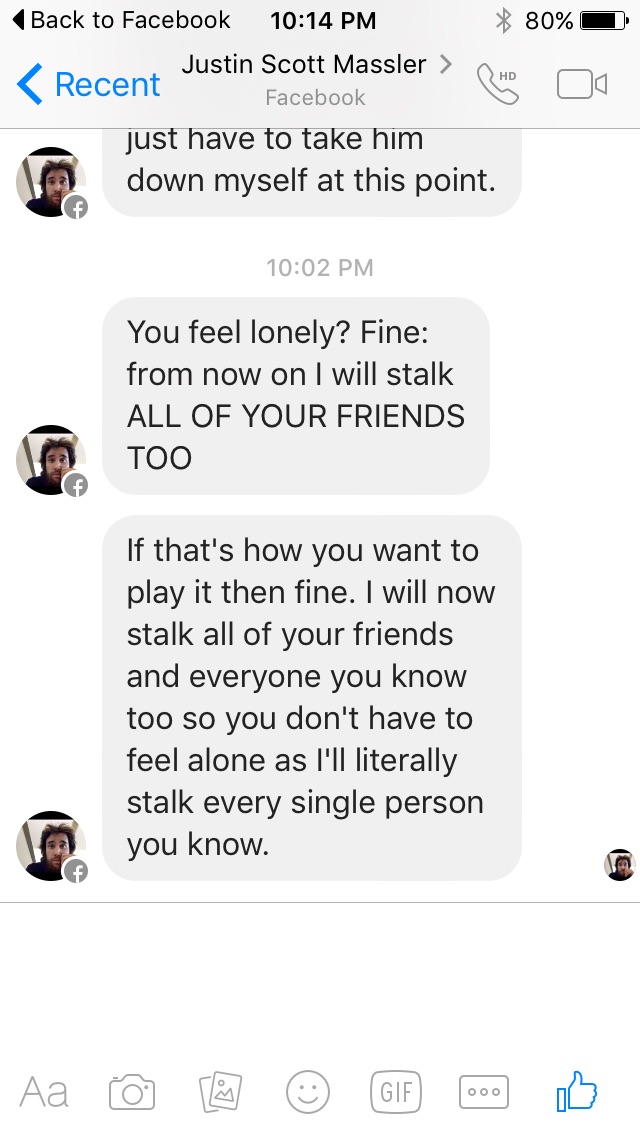 During this time, Claire lived in “absolute fear.” She couldn’t leave her house without tracking his IP address to see if he was nearby, not even to walk her dog. She had a hard time dating and finding a job — the Trump connection made her case so public that any potential employer could Google her and see her stalker had an unsettling history of workplace violence. She went into debt. She barely slept.

However, she didn’t report him. Not right away, at least. She’d heard how unsympathetic the police could be toward stalking cases, so she tried to just wait it out. 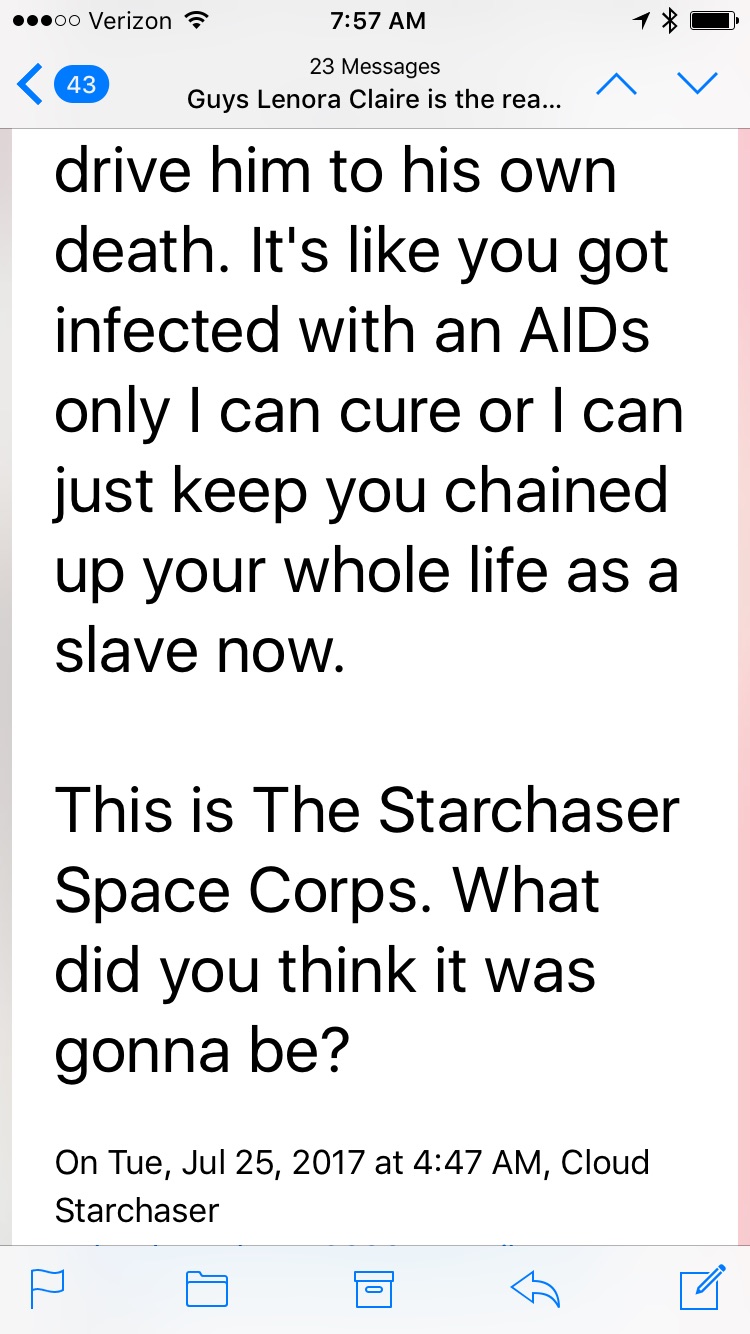 But that changed after Massler threatened to kill her boss. Armed with a mountain of evidence — thousands of threatening emails, voicemails, handwritten notes and social media posts — she went to the LAPD, hoping she’d walk out with a restraining order. Given the paper trail he’d left, she thought she’d have no problem.

However, when she arrived at the police station, she was confronted with a different reality. According to a 2016 telephone interview Claire gave to the Harvard Journal of Legislation (HJOL), the police didn’t seem to care. Though she’d presented more than enough evidence to warrant a restraining order against Massler, the police denied her request, saying he couldn’t be served because he was homeless and had no physical address. Their most valiant effort at helping her that day included photocopying some of his notes and giving her some misguided advice: “Change your hair color and get off the internet.”

“I just thought that if you were getting a credible threat from someone with a confirmed violent history that maybe [the police] would at least hear you out,” she told HJOL. “But they did absolutely nothing.” (I reached out to the LAPD for a response, but they didn’t respond as of press time.)

And so, Massler was allowed to stalk and harass Claire for years, unchecked by law enforcement. “It was like I was being held underwater and that I was trying to scream, but nobody could hear me or would help me,” she says.

That’s a common feeling for the 7.5 million Americans who are stalked each year. Because most stalking cases don’t involve obvious physical evidence or injuries — a bullet, a broken nose, a stolen car — they’re rarely investigated by police. According to cyberstalking expert, risk management consultant and attorney Alexis Moore, police usually prefer to use their time and resources following up on more tangible, clear-cut offenses like robbery or murder.

“Stalking crimes can also be ‘he said, she said’ situations,” explains Moore. “They’re difficult to prove. Often, it’s not clear to the police that a law has been broken until the worst happens,” which might explain why in half of all reported stalking cases, the only action taken is filing a report. Twenty percent of the time, the police do nothing at all.

Cyberstalking complicates things further. According to HJOL, many police departments avoid taking any action against cyberstalkers because their lack of training around technology and social media leads them to believe no laws are being broken. And if they do recognize that stalking is taking place, it’s often charged as misdemeanor, not a felony. Currently then, the best option victims like Claire have to protect themselves is to serve their stalker with a restraining order, but that can be costly, difficult and often ineffective.

Nevertheless, Claire was eventually granted one against Massler in 2016 after he was taken into custody for a separate crime. It didn’t do much, though — he contacted her immediately afterwards, a jarring reminder that in some cases, a victim’s best defense is really only as good as the paper it’s printed on.

Instead the, Claire dove deep into personal security, teaching herself how to trace an IP address, locate GPS trackers and understand geotagging so she could get a vague idea of where Massler was at any given time. She set Google alerts for her name and began to decode California’s complicated and often ineffective stalking laws. She’d realized they were garbage early on, but she wasn’t prepared for just how little protection they offered. For one, there was no clear protocol for how to handle stalkers who travel between states. Though interstate stalking is the domain of the FBI, Claire says coordination between it and state agencies is often ineffective.

“If you’re like me and your stalking and harassment crosses state lines, everyone just kind of passes the buck,” she says. “Legislation that could help federal and state agencies work together would be incredibly helpful.”

The protocol for serving stalkers also seemed backward — in most states, stalkers have to be served in person. But what happens when the stalker is on the move, or can’t be located? Finally, there was no national stalker registry, which made no sense — if sex offenders and domestic abusers had to register, why not stalkers?

Knowing her connection to the Trump clan gave her case enough newsworthiness to capture some public attention, Claire decided to funnel her anger and frustration into advocacy work for other stalking victims like herself. Claire’s celebrity also landed her spots on TV shows like 48 Hours, Dr. Oz and Crime Watch Daily, where she spoke openly about her story and how poorly victims are handled by the police. On the set of Crime Watch Daily, she met international stalking and threat advisor, author and prosecutor Rhonda Saunders.

Together, the two started working on a pair of anti-stalking proposals aimed at creating protections for victims that would actually work. The first would make it possible for restraining orders to be served over email, in the absence of a physical address. Had this been an option during her ordeal with Massler, Claire wouldn’t have had to wait five years to get legal protection. Assuming he’d had a valid email, she would have been able to serve him right away.

The second proposal would pave the way for the creation of a federal stalking registry. If implemented, it would function exactly the same way existing sex offender or domestic violence registries do — convicted stalkers would have to alert their neighbors, employers and families that they were on the registry, and would be restricted to living in certain areas.

Both proposals, which include suggestions for better police training in cyberstalking and doxxing, were delivered to the Department of Justice by Democratic California Congressman Adam Schiff late last year. That said, Claire says she’s not overly confident they’ll go to vote. “While the irony isn’t lost with me that I share a stalker with the president’s daughter, I don’t exactly think this administration really cares about victims, especially when the crime is usually directed toward women,” she explains.

Claire has called out the Trump family multiple times to ask for help, but she’s been met with nothing but silence. In fact, Claire says Ivanka has ignored all her attempts to contact her, even before her father moved into the White House. Overall, Ivanka has used none of her political capital to speak out for other victims like herself.

In the meantime, while Claire waits to see how her proposals fare in the Department of Justice, she’s working on an initiative in California that would allow stalking victims to use GPS-connected ankle monitors synced to an app that victims could use to monitor their stalker’s location. As long as the stalker is on probation and his restraining order is still valid, the app would alert the victim any time their stalker is in their vicinity. Technology like that could save lives —according to the New York Times, one quarter of stalking victims are murdered by stalkers who they already have restraining orders against.

Interestingly, most states already have laws that allow courts to order GPS technology to track convicted stalkers, but according to Moore, they’re not being implemented — i.e., the funds aren’t being allocated toward providing training and technology to effectively utilize it. (That, however, hasn’t stopped Taylor Swift from using ankle monitors in her own stalking case — turns out anyone can request them in conjunction with a restraining order, but not all counties are able to provide them to victims.) Claire’s initiative would put the option to use GPS in the victim’s hands, circumventing the funding problems courts face. She expects to file her initiative next year.

All the while, Massler lives in Claire’s periphery as a perpetual threat. Although he’s being held in L.A. on $1 million bail thanks to a sting Claire set up to catch him, he hasn’t been charged, and there’s been no trial (though hearings are scheduled for January 8th.) Her biggest fear is that he will plead down or be found not guilty for reasons of insanity. “I have to deal with this for the rest of my life or until he dies,” she says.

But that’s also what drives her. “I would like to not die at the hands of a mentally ill man who did not get help,” she says. “And I would like to help others live their lives and thrive and not have to experience this nightmare.”