How a Pair of Pickup Artists Turned Into Far-Right Extremists

As we continue to piece together the chaotic U.S. Capitol riot on January 6, 2021, the day Congress was to certify Joe Biden’s electoral college victory, we’re finding out what the pro-Trump insurrectionists had in common. They were overwhelmingly white, and not a few could be labeled white supremacists. At least 22 current and former members of the military and law enforcement participated in the violent mob. Conspiracy theorists, including QAnon followers, have been arrested for storming the building. Many livestreamed the assault or otherwise documented it for social media, suggesting a keen interest in online clout.

All of this is more alarming than it is surprising. The extremist groups that had promised to fight the 2020 election result did, in fact, show up. But here’s a curious tidbit: Two men busted for their roles in the uprising are supposed pickup artists who marketed programs for attracting women.

Both Samuel Fisher (aka “Brad Holiday”) and Patrick Stedman present themselves as masculine high achievers in every aspect of life — not just dating. Fisher’s website is packed with content about fitness, health, style and grooming. Stedman’s dating coach business is registered as The Dynamic Man, LLC, and his blog has posts titled “How to Host a Party,” “The Four Types of Friends You’ll Make in Your Life” and “Why Every Man Should Go Hunting.” Fisher is prolific on YouTube despite his tiny subscriber base, while Stedman has 25,000 followers on Twitter.

At this point, there is no reason to think their paths ever crossed, either in the virtual manosphere or in person earlier this month. But each arrived in Washington, D.C., as a fully radicalized believer in fringe right fantasies that had essentially overtaken their branding as master of the opposite sex. Fisher has openly advertised his QAnon affiliation for months, and Stedman, despite claiming distance from the movement, has adopted its slogans and ideas. 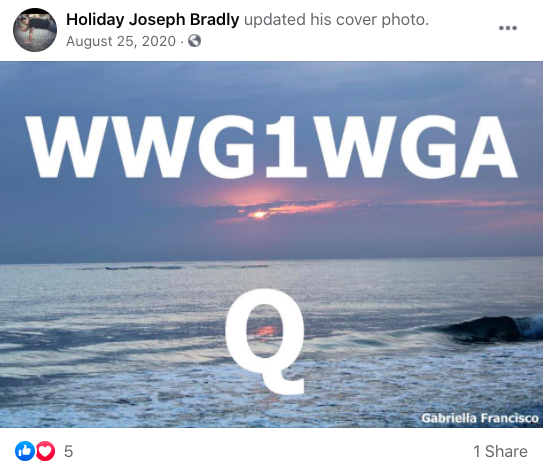 Combing through their digital histories, it’s clear that an interest in the junk science of pickup artistry (Stedman claims expertise in “female psychology”) brought them into communities that propagate even more outlandish concepts and view everything through the lens of a culture war. To consider women as conquests or possessions for the dominant, controlling male is to align yourself with the anti-“social justice warrior” crowd, which rejects the basic tenets of feminism and bemoans the plight of the straight white man.

In the “Start Here” section of his site, Stedman traces his actualization as man to a chance discovery of The Game: Penetrating the Secret Society of Pickup Artists, a bestselling book in which author Neil Strauss learns techniques of seduction from a mentor named Mystery, later the host of VH1’s The Pickup Artist. The guide “would be the start of a new chapter in my life,” Stedman wrote, not because he still believed in the advice it offered, but “because it transformed my perception of what you could become.” This telling and ultimately rather chilling phrase is bolded on the page. Years after reading The Game, he wrote a blog post detailing “3 Reasons Donald Trump Gets Hot Chicks.”

For his part, Fisher looks to have started out as a rise-and-grind entrepreneurial mindset bro. His oldest available videos feature him in a suit and tie, talking sales and business strategy. He has mentioned, however, an older YouTube channel that was deleted, and in 2019 he encouraged viewers to join him in an “uncensored” channel on the messenger app Telegram, a platform favored by neo-Nazis. In a video touching on the “healthy relationship” between Donald and Melania Trump, Fisher approvingly asserts that they met when Trump — “such a boss,” he remarks — ditched a date and “cold approached” her.

Like Stedman, he uses pickup language to describe Trump’s alpha status, and the jargon on his website goes further. There’s a section devoted to “LooksMaxx,” a term from incel forums for often extreme methods of altering one’s face and physique with the aim of increasing sex appeal. Three months ago, Fisher announced the relaunch of bradholiday.com, and in that clip, he incidentally laid out how someone might progress from a right-leaning manhood guru to a broadly delusional reactionary. He starts by assuring his audience that the revamped site will feature traditional pickup techniques, which he says are “degenerate” but used “out of necessity” to “survive the situation with women.”

When he transitions to the topic of COVID, you can hear the sudden frustration in Fisher’s voice — he views the coronavirus as an overblown, China-made biological agent, but even worse, it’s an impediment to sex. As most women are “bought into” the notion that the virus is dangerous, he complains, “you’re not going to find too many chicks […] in any liberal area that get the fact that COVID is basically a high infection rate disease, very low mortality, so they’re going to freak out about meeting you.” (He recommends assuring them that multivitamins, sitting in a sauna and red light therapy will keep them safe.)

It’s as though the pickup artist is so accustomed to his baseless manner of expertise that this confidence absorbs misinformation on new and complex topics of the day, from pandemics to constitutional law. And since immersion in red pill, incel or male supremacist ideology puts you in direct conflict with liberalism, these men are disposed to favor hard-right forms of contrarian “truth.” Stedman alludes to a deep state cabal behind COVID-19, and the substance adrenochrome, supposedly harvested from trafficked children by evil Democrats. Fisher thinks the entire Biden family are pedophiles.

The enthusiasm for pickup artist theory and the appetite for sensational lies that would convince you to invade the Capitol have the same roots: insecurity and instability. What comes across equally from Stedman and Fisher is their need to feel correct, and that they will prevail over critics and doubters. This is why both had to advertise their presence in the riot, with Fisher even daring to brag about the firearms he allegedly brought to D.C. That day was supposed to affirm the bizarre reality they’d been selling, and their footprints reveal how desperate they were for that validation. Stedman, apparently married, is nonetheless said to live with his parents, and his wife’s Twitter account has vanished; Fisher’s New York apartment is hauntingly bare, with the exception of a Trump flag. There is little to indicate that either man has close friends or hobbies (former high school and college classmates identified Stedman to the FBI), and the incredible volume of their posts in the past year — the frequency with which they ranted into a camera uninterrupted for thirty minutes or an hour — speaks to a fundamental loneliness.

Although none of it absolves them, there is something to be learned in these cases. People want a narrative that simultaneously explains why the world is not as they would prefer it, and what it would take to resolve the imagined crisis. That some are naturally transitioning from a regressive philosophy on men versus women to a story of patriots versus satanic elites means we aren’t communicating tangible alternatives for those who are drawn to hateful, incoherent nonsense and continue to seek an escalation of it.

They lack a way of acknowledging society’s ills that empowers them to act constructively, or at least rationally, instead of raging at phantoms and succumbing to paranoia. It starts with something as simple as a bad breakup, even a date that doesn’t pan out, and ends with the attempted overthrow of the government, this ultimate rejection of the unbearable status quo. The journey is paved with a continuous discontent, first personal, then generalized and magnified until there is nothing else.

Right now, another man is only just embarking on it.