In a 17th-Century Castle, the World’s Grandest War Game Comes to Life

‘Europa Universalis IV’ is a world-domination simulator on a massive, almost unthinkable scale. In Poland, its top players met IRL — amid sword-fighting, falconry and musket shooting — for the battle royale

The people tasked with saving the world are squatting around high-powered computers set up on wooden tables in an old Polish castle named Moszna, moving dots around a map with the click of a mouse. These dignitaries for the day, some dressed in costumes redolent of a Renaissance Faire, are warring their way through 400 years of world history, from the middle of the 15th century to the beginning of the 19th. They’re doing so by playing a game called Europa Universalis IV — the signature product of a Swedish software company called Paradox Interactive.

Imagine the Civilization franchise on steroids and you’re on your way toward understanding EU. It’s not just “strategy” but “grand strategy,” a diplomacy simulator on a massive, almost unthinkable scale — real-time gameplay in lieu of turns, the entire world map serving as your sandbox instead of a finite number of small tiles and hundreds of playable countries at your fingertips. You, the absolute and undisputed monarch of your domain, dictate everything that happens within those borders: taxes, military training, education, fortress upgrades. But you can’t control your peasants, nobles, merchants and clergy, any of whom will revolt against what they perceive as tyrannical rule. Nor can you control your opponents, the 30 or 40 schemers who can pile into a multiplayer game and wipe you off the map. Pitted one against the other, Europa Universalis provides them with the tools to do what human leaders do best: stab each other in the back, over and over again, because the rigged system of world politics offers them no better choices.

But now, in an effort to push the diplomatic intrigue to 11, the sub rosa negotiations have moved from chat windows and Discord conversations to a 17th-century Polish castle, where several of the world’s top Europa players, including the legendary Florryworry, have gathered to settle their grievances in person.

Officially, it’s Paradox Interactive’s second “Grandest LAN party.” Unofficially, it’s yet another kind of Geek Olympics, in which players will don the tricorne hats, clerical collars and heavy metal breastplates representative of the countries they’ve chosen to play. “Many of the attendees are serious history buffs, attracted to how the game creates all these moments of maybe that require you to pivot one way or another when forced to make a critical decision,” says software engineer Nathan Zimmerman, a rising Europa star (and longtime friend).

Zimmerman, also an astute student of history and politics, lives for such moments. “My strategy is always focused on the long-term, as strategies should be,” he explains. “I appear to be waiting and playing not to lose, even as I’m doubling down on the massive indebtedness I’m hoping will pay off in huge trade revenue or tribute from vassal states hundreds of years later. However, I go much further in these directions than most people could ever imagine, particularly if I’ve lined up some allies to take the lumps for me early on. So I’m difficult to play, because I’ll take major risks while also making early engagement very costly. It’s partly about surviving until one or two technological payoffs put you well ahead of the pack, which is what the European nations actually did. Then you can lock everything down and finish as a ‘Great Power.’”

In a lot of ways, that’s what’s brought Zimmerman to Poland. Obviously, he wanted to test himself against other great players, but he also wanted to see how being part of a team and engaging in real-life diplomacy would alter the dynamic. In that regard, the event is like a mega-Model United Nations. In fact, it’s the sort of thing all Model U.N.’s aspire to be, as the teams roleplaying various countries are forced by their circumstances to make many decisions with negative consequences for the entire world in order to preserve their little patches of soil.

“In the case of my team [the Indian kingdom of Mewar], we’re trying to balance off a variety of great powers, ranging from Qing China in the East to the rising European nations in the West, as well as the great Central Asian empires in between,” says Zimmerman.

Although Europa Universalis games can be “broken” for one player or another with a bad move in the early going, the actual game itself is extremely long, and not for the faint of heart (the Grandest LAN stretches across four very long days, with Reddit recaps frequently mentioning how “bedtime” is the primary fatigue factor impacting this Twitch-comes-to-life showdown). “People accustomed to short Smash Bros. matches or hour-long Dota 2 and StarCraft games would need to look elsewhere,” says Magdalene Moy, a doctoral student at Drexel University who attended the Grandest LAN as an observer, since part of her research examines the efficacy of historical grand strategy games as teaching tools. (She’s also married to Zimmerman.) “But the result of participating in a confined single space like this is that, however much diplomacy occurs behind the scenes, the participants are forced to become friends — or at least collegial. They’re competing and cooperating at the same time, in a simulation that’s impacted by real historical modifiers and follows its own internal logic.”

“Interestingly enough,” she continues, “that’s like actual diplomacy: The envoys and ambassadors all get to be colleagues or friends, even if their countries are a few years or even weeks away from waging war against each other. You’re embargoing each other or subsidizing each other’s rebels with a smile.”

In Zimmerman’s case, the first two days go exceedingly well, as he manages shifting alliances with other teams that allow him to invest resources in high-quality soldiers and the rapid conquest of the Indian subcontinent. By the third day, his team has secured a desk in the castle that allows them to receive diplomats from other teams through a secret rear entrance. And in response to rampant rumors — rumors being the whole point of gathering all these people together — they decide to tear up some treaties and throw themselves into a few preemptive wars.

“We voided a contract of mutual defense with some of the other Asian powers for the sake of expansion and fun,” he explains. “As for the rumor-mongering about developments in other parts of the world that led to people being criticized at the event, it’s not, like, pointless anonymous trolling and forcing rage-quits in the totally online space; the cloak-and-dagger stuff is actually why many of us traveled thousands of miles to participate in person. Well, that and the fact that you could practice firing actual muskets and shooting arrows and so on.” (Paradox provided side activities such as sword-fighting, falconry tours and musket shooting.)

Still, Moy says, “although many people are participating from time to time in these events, they’re much more concerned with in-game events. A number of participants also have their own costumes, with the teams representing certain nations dressed up like they’re in the Vatican or French musketeers.”

“Folks who are dressed up like papal legates or whatever are doing so because they identify strongly with, say, the Papal State, not because they’re there to cosplay,” Zimmerman explains. “It’s the same thing with the castle. It’s like a scenic backdrop to the game itself. When the Twitch streamer Pavel built up the Manchus a bit, forming Qing China, and went on Twitch wearing tribal furs and threatened to burn all the capitals of the world’s nations to the ground, he found himself on the receiving end of a massive anti-Qing coalition war. The mise en scène really heightened the excitement, because that couldn’t really work in an anonymous multiplayer game, although we still probably would’ve banded together to silence an arrogant or dangerous player who posed a threat to us.”

As for Zimmerman’s Mewar, in the end, its fortunes fell because Persia had waited long enough to ally various European nations against it, and received those commitments because the Persian team was both “gentlemanly” in its conduct while also able to “keep things secret from the Indian bloc.” Ultimately then, Mewar was mainly left with the role of spoiler. “If Mewar hadn’t joined with Prussia to pull the Mughal Empire out of Europe, France and Florence would’ve been soundly defeated by 1821. By that point, too, it was very personal. Costumes or not, people were personally invested in their nations and national outcomes. You become absorbed in the history you created.” 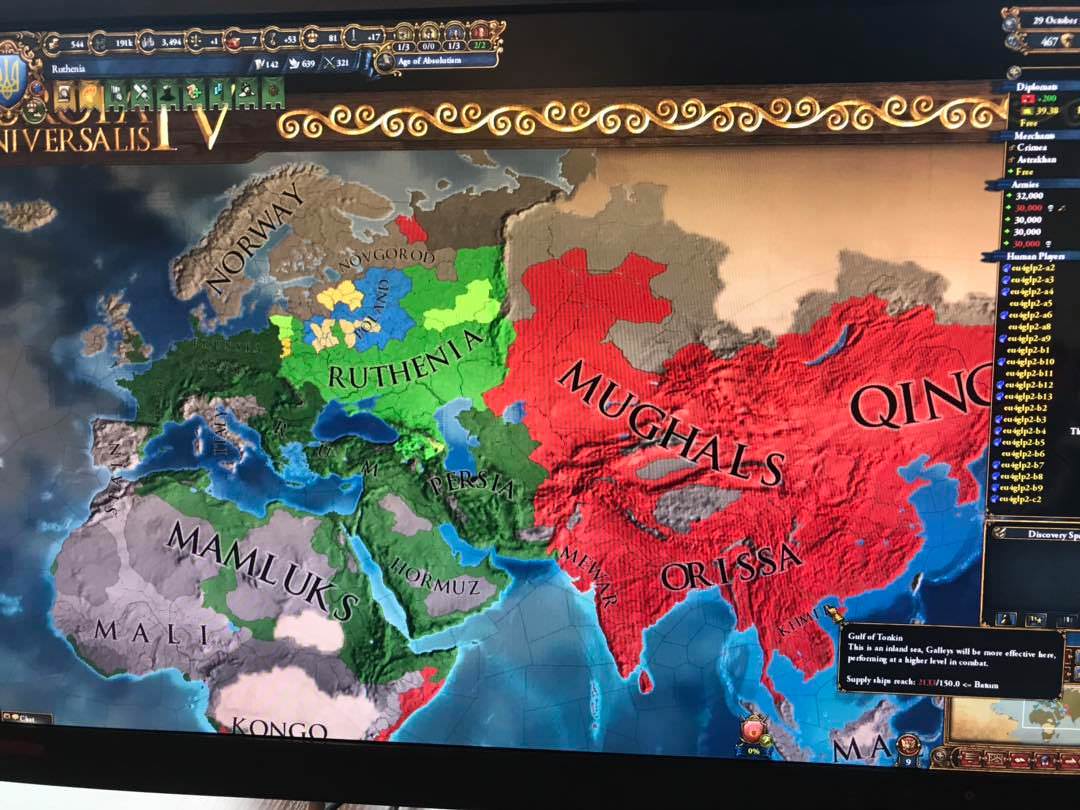 So how good, I ask Nathan, are the best Europa Universalis players? After all, the gap between top competitive StarCraft and Smash Bros. players could amount to thousands of additional clicks and button-pushes across the course of a competitive match. “Europa Universalis is a very different type of game,” he says. “I’d say that I’m as strong on tactical controls used in real time as any player, since I cut my teeth on real-time strategy games and was briefly a world-class Warcraft III player. But Europa offers players a different type of experience: You can make one or two great strategic decisions and somehow survive a lot of bad clicks. Or you can make one bad strategic decision and ruin hours or days of patient, smart planning.”

But for Zimmerman, as well as for some other players at Moszna Castle, the real point of the Grandest LAN was about playing alongside other people and experiencing how unusual their decisions can be. “No computer player can simulate human strategic decision-making the way I like to experience it,” he says. “I want to see strategies, infuriating or surprising, that are like nothing I’ve ever experienced before. I want to see people acting out because they’re overconfident or intoxicated. And I want to devise and implement off-the-wall strategies myself. With Europa, that requires me being part of a community with all these other players: Their hours of play — both cooperative and competitive, since alliances are always shifting depending on our needs — affect my own play style.”

“Observing how these teams of players interacted was unlike any other gaming experience I’d ever studied,” Moy adds. “You get to watch a simulation of a world on the brink, in which every team eventually finds itself forced to make one move or another to grab another patch of land simply so someone else can’t have it, because the results of them having it would be catastrophic for what’s perceived as the balance of power. They might have hoped to help the other teams they liked, since a lot of the people were indeed friendly to one another, but they also had to do the things that were expected of them as rulers or they wouldn’t be around for very long.”

Oliver Bateman is a contributing writer to MEL Magazine. He writes about the extreme sides of fitness, the weirder sides of MMA and pro wrestling, and the unorthodox lifestyles of professional athletes. His writing on these topics has appeared in publications such as the Paris Review, the Atlantic, and the New Republic. Ever since he was a little kid, he's been really good at exercising.