‘Mank’ Is David Fincher’s Most Personal Film. But It’s Got Its Heart in the Wrong Place.

Making a movie about the writing of ‘Citizen Kane,’ the Oscar-nominated director turns his beloved late father’s script into a salute to the creative process. But its obsessive recreation of Old Hollywood is both impressive and limiting.

David Fincher doesn’t do warm and fuzzy. In his movies, things go wrong and happy endings are hard to come by. In The Social Network, Mark Zuckerberg builds an empire but loses his best friend and can’t ever get his ex-girlfriend to give him the time of day. The serial killer goes unpunished in Zodiac. Anarchy reigns as Fight Club rolls credits. Michael Douglas has to metaphorically die in The Game before he can be redeemed. Brad Pitt’s true love ends up as a head in a box in Seven.

So perhaps it’s a low bar to announce that Mank is among the Oscar-nominated filmmaker’s most sentimental works — even though it’s still plenty sobering and bitter. This drama about the writing of Citizen Kane, which includes a candid look at the societal ills that helped inspire it, is steeped in alcoholism, suicide, class warfare and Adolf Hitler. Even though it’s set in the seemingly razzle-dazzle world of Hollywood, despair and cynicism are the prevailing moods. And yet, one can’t miss the compassion Fincher has for his characters — a rarity for a director known for his chilly view of humanity. It’s fascinating to witness a warmer David Fincher, but having seen Mank twice now, I’m not sure it suits him.

Jumping back and forth over about a decade, the film stars Gary Oldman as Herman Mankiewicz, a respected New York playwright who moved west to become a screenwriter. (Like every other scribe who made the trip at the time, the lure of big money was too tempting to pass up.) In the present-day story, it’s 1940, and Mank is moving into the remote motel where he and his typist/assistant Rita (Lily Collins) will focus over the next few months on one task: his writing of the screenplay for Orson Welles’ (Tom Burke) first film. If booze doesn’t kill him, maybe he’ll make a masterpiece.

Since its release in 1941, Citizen Kane is often cited as the greatest of all movies, but alongside that sterling reputation has been endless debate about who the “real” genius was behind its making. Normally, the man who co-wrote, produced, directed and starred in the picture is considered its mastermind — especially when it’s someone as venerated as Orson Welles is — but naysayers, the most famous being New Yorker critic Pauline Kael in her controversial 1971 essay “Raising Kane,” have long argued that, really, it was Mankiewicz who deserved the laudits. Both men were credited with the script, but the cineaste conspiracy theory has always been that Welles puffed up his contribution, causing Mankiewicz never to be fully celebrated for his incredible screenplay.

Mank adopts the view that Mankiewicz was that film’s chief architect — or, at the very least, the man whose sensibility and personal experiences gave that first draft its soul before Welles even laid a hand on it. We watch Mank, laid up in bed because of a broken leg, coming up with ideas for the screenplay, intercut with frequent flashbacks to his earlier days in Hollywood and his meeting of two people who will become crucial figures in Citizen Kane: the successful businessman and newspaper publisher William Randolph Hearst (Charles Dance) and his lover, aspiring actress Marion Davies (Amanda Seyfried).

There are going to be two types of audience members for Mank, which arrives in some theaters on November 13th before landing on Netflix in early December: The people who don’t need to be told who Hearst and Davies are in Citizen Kane, and those that do. (For people in the latter group, Hearst is the model for Welles’ character Charles Foster Kane, and Dorothy Comingore played Susan Alexander, the delusional and untalented Davies-like ingénue who hastens Kane’s fall from grace.) And to Fincher’s credit, he serves both audiences fairly well, nodding at enough Citizen Kane references that fans will appreciate, while helping to keep the uninitiated up to speed with what’s happening. (Unfortunately, that does mean that sometimes Mank has to do that awkward thing you see in biographical dramas in which characters who know each other really well greet one another by full name so that viewers can keep track of who’s who. In other words, to cite the incisive rock-biopic parody Walk Hard: The Dewey Cox Story, it’s the “That was freakin’ transcendental, Paul McCartney. Don’t you agree, John Lennon?” problem.)

Fincher’s protagonists are often tortured, complicated individuals — it’s a 50/50 proposition whether or not you’re even supposed to like them — but despite his boozing and platonic affairs (he has a wife and kids back on the East Coast), Mank is most certainly a good guy. Ready with a cutting quip for every situation, he’s an idealist who believes in the little guy. Even though he writes for the pictures, which peddle fantasy and pat moral lessons, Mank believes passionately that popular entertainment needs to say substantive things. Not that he feels like he’s written anything substantive in years: When he’s hired by Welles, Mank thinks this might be his last chance to do something worthwhile. And from the flashbacks, we’ll learn how his time around Hearst and Davies helps shape his political consciousness, provoking him to write the greatest film ever made. 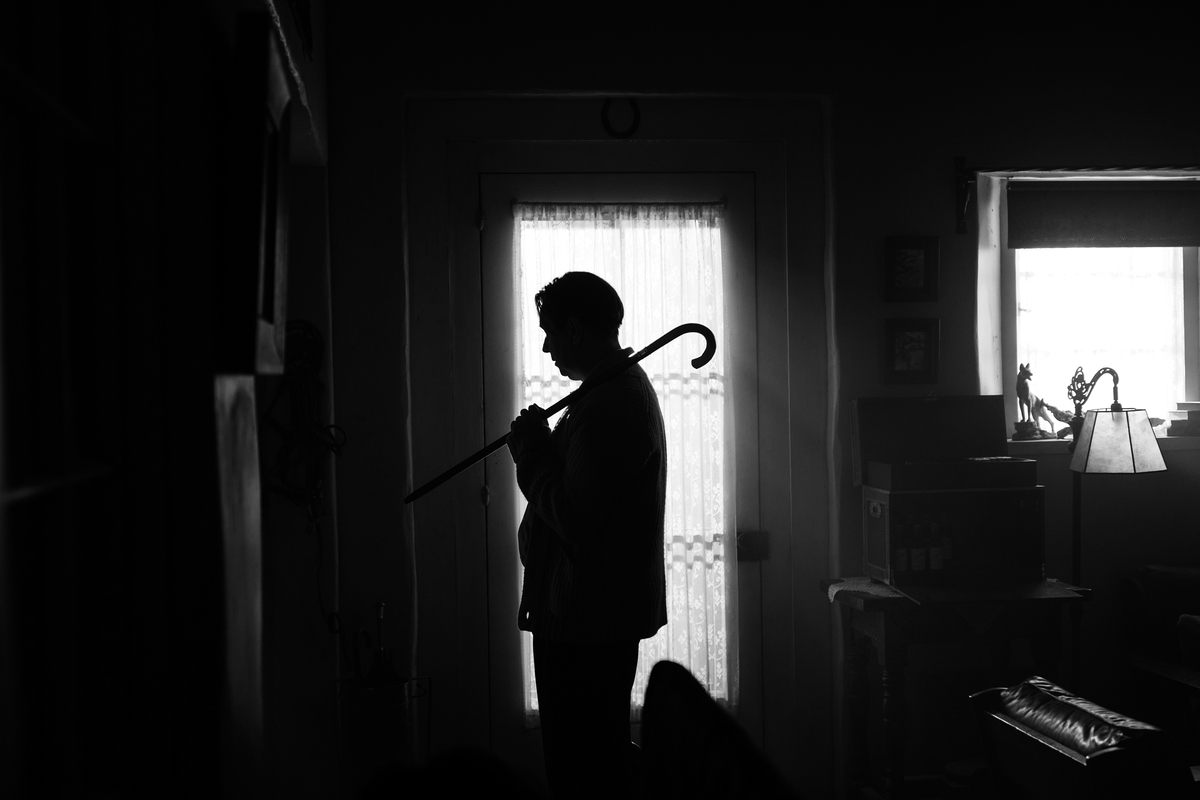 But it’s not just the high regard in which Fincher holds Mank that suggests this is a less coldblooded film than we normally get from him. It’s also because of the man who wrote Mank, Jack Fincher, David Fincher’s father, a journalist and screenwriter who died in 2003 at the age of 72. Mank was a project the two of them had discussed since the beginning of David Fincher’s film career — Jack had gotten his boy hooked on movies in childhood — and in a recent interview it was clear how personal this script was to him. “I’m not a writer. I don’t take credit for things that I don’t do,” Fincher told New York. “Listen, I’m the offspring of a writer. I can’t. I’ve watched somebody put a blank piece of paper in a 1928 Underwood and sit there for 45 minutes. I know how lonely that is.”

And for a director who crafts technically brilliant, emotionally muted, obsessively orchestrated thrillers, he sounded like Mank came more from the heart than the brain. “I don’t want to get mawkish about that, but I mean… it’s the love of a film that was given to me by someone who I could talk over these things with and really excavate — and then he was gone,” he continued.

Anyone not familiar with Fincher’s films won’t regard Mank as a sappy, manipulative tearjerker. By and large, it’s a pointed examination of ego, power and the insecurity that comes from trying to achieve artistic greatness. But knowing Fincher’s close connection to the material — and the fact that he and his dad shared a love of movies — Mank is a sympathetic look at the plight of the screenwriter, the low man on the Hollywood totem pole. Like all of Fincher’s movies, the world of Mank is alienating and inhospitable, but in a not-that-different way than in Seven, he populates it with a genuine hero trying to bring reason and justice.

And because it’s a David Fincher movie, that also means that Mank is immaculately crafted. It’s not just that the film is set in the 1930s and 1940s — it has to look like a movie from that era. That doesn’t simply mean it’s shot in silky black and white — Fincher and his creative team mimic the period’s primitive-by-modern-standards sound design while his actors copy the slightly stiffer/more theater-based performance style. (If all that wasn’t enough, you’ll also hear the bygone noises that accompanied the changing of film reels, as well as occasionally notice the cue marks that were part of shooting on celluloid.) All of this will be catnip to nostalgic moviegoers, and it’s been executed with the consummate precision you’d expect from a guy who’s famous for doing lots of takes because he wants to be sure everything is exactly to his liking.

But whereas in the past his obsessiveness greatly benefited the films — Zodiac, for instance, is a thriller entirely about the dangers of obsession — Mank’s meticulous recreation doesn’t ratchet up to a higher purpose. Mank resembles a movie of the pre-Citizen Kane era, but I can’t say that effect left me with much to ponder. It’s clear that the problems Mank sees in his time — the rich wielding their influence to distort reality, corporations trying to crush the working class, patriotism being used to enforce conformity, fascism gaining momentum in an unstable world — are meant to echo our present. But Fincher’s obsession with duplicating an era’s filmmaking style ends up curtailing the story’s emotional and thematic thrust. Normally, I find his movies hypnotic in their laser-like focus — every scene matters, every shot matters, every cut matters — and while they’re often not very warm, the commitment he brings to his films and the respect he has for his audience’s intelligence is its own kind of love. Mank, however, largely just feels artificial — a beautifully rendered exercise without the churning ideas and burning passion underneath.

And so what we’re left with is a movie with great atmosphere in which the individual characters sometimes emerge from the decor. Oldman, significantly older than Mankiewicz was, suggesting how drinking and disillusionment had already taken a significant toll on this 43-year-old writer, exudes Mank’s wit and battered optimism. Just as importantly, you buy that he’s a writer, which is one of the toughest tricks an actor can pull off. But other figures around him are less vibrant, with the exception of Seyfried, who plays Davies as a lovely, self-conscious young woman intimidated by Hearst’s world of power players. Unlike Citizen Kane’s petty dimbulb Susan Alexander, Davies is a thoughtful, kind person, and one of Mank’s more poignant throughlines is that, although Mank had great affection for Davies, he knows that audiences will assume Susan Alexander is her, even though he didn’t intend it to be a one-for-one comparison. (If anything, the hatchet job is more a way to get back at Hearst, whom Mank will come to loathe.)

In the interactions between Mank and Davies — which have a flirtatious, conspiratorial undercurrent, the two bonding over the fact that they know they don’t fit in Hearst’s universe — Mank says something substantive about how the real-life inspiration for the characters that writers concoct are, in some ways, ultimately defined by their fictional selves. Mank realizes he’ll hurt this woman, but his devotion to telling the truth about Hearst — envisioning him as a once-great man who let his need for power and adoration destroy him — outweighs everything else, even friendship.

It’s touching, then, that Fincher hopes to honor his father by making the movie that Jack Fincher wrote. It’s a love letter to him, and to writers in general. But I can’t say I felt much while watching Mank.

I guess, too, that in hindsight it’s inaccurate to say that no Fincher movies are emotional. The Curious Case of Benjamin Button was an epic romance — a legitimate tearjerker — that many hated simply because it felt like a sellout from the director of Seven and Fight Club. But if you watched that film closely, you recognized how despairing it was, how it viewed Brad Pitt’s aging-backward character as the ultimate luckless man. Like all of Fincher’s movies, Benjamin Button was a pessimistic film energized by the director’s compulsion to make it — his zeal that he wouldn’t stop until every little part of it was perfect. You felt Fincher’s heart in every frame. By comparison, despite how personal it is for Fincher, Mank feels oddly distant.