‘Currycels’ and the Unsurprising Racism of the Incel Community

‘I don‘t think I‘d be taken as seriously if it was known that I was from India.’

Over a grainy Skype call, 22-year-old Prakash Sharma, a computer science major in New Delhi, tells me about his experiences online as a self-described incel. Like other “involuntary celibates,” Sharma spends a great deal of his free time on Reddit, 4chan, 8chan, and of course, incels.co. He reads threads on the supposed increase in promiscuity of educated women and the “unfair” expectations placed on men to be “chads.” But unlike most other online incels, he conceals more than just his name, setting his location to Virginia or Montreal (as opposed to New Delhi) whenever he posts on incel message boards. “It’s sad, but there’s a lot of racism in the incel community,” he says with a sigh. “I don’t think I’d be taken as seriously if it was known that I was from India.”

“I know that when I go into [the ‘manosphere’], racist language will be used and accepted — I usually ignore it,” Sharma continues. “But the [incel] community is different. On other message boards, racist language is used for everything. In the [incel] community, racist language is used as a personal attack.” While Sharma, like incels living in the West, might not be dating or having sex, he knows they won’t see him as an equal victim of liberalism and feminism. Instead, he will be referred to as a “curry” or a “currycel,” a derogatory term used by white incels to describe South Asian men. Per Urban Dictionary, it roughly means: 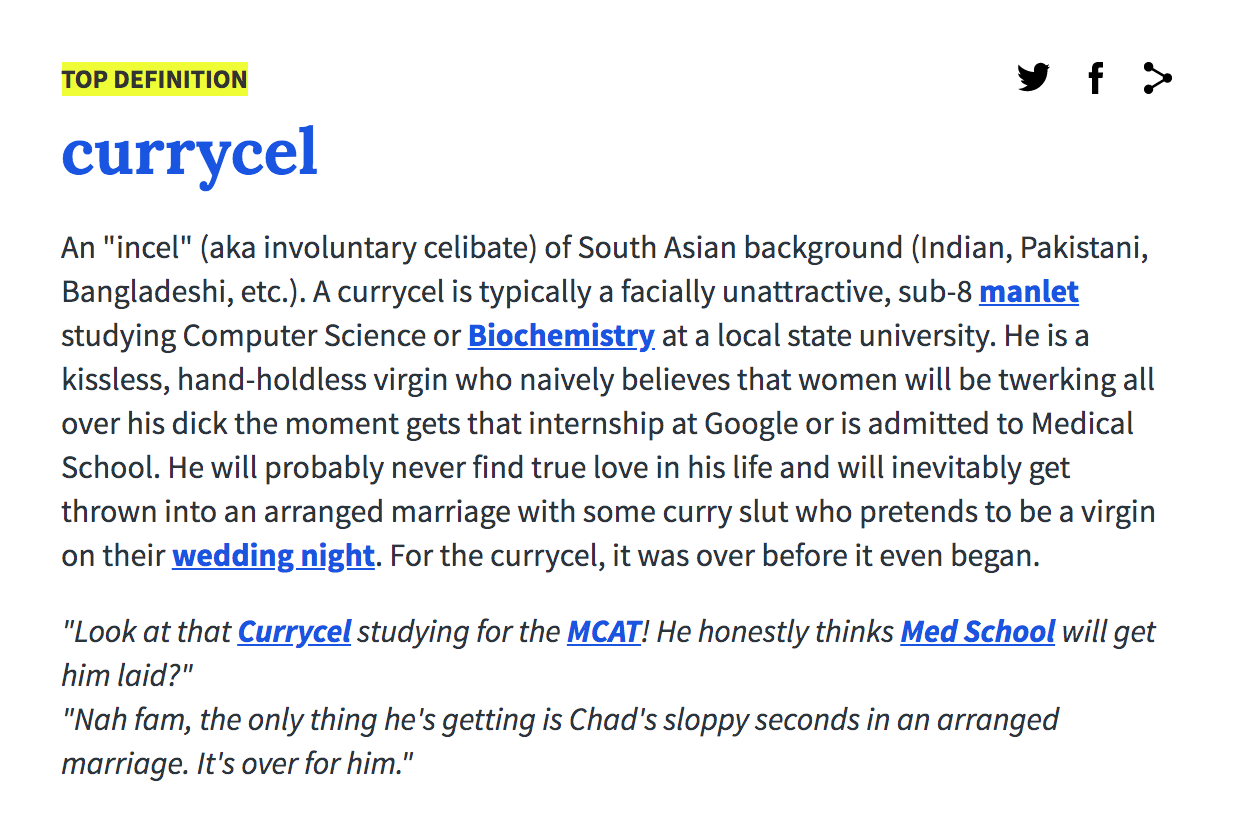 When I ask Sharma why he feels the mainstream incel community are hostile to Indians, he says that while there are racially derogatory terms for anyone who isn’t white (East Asians are referred to as “ricecels” and black incels are referred to as “tyrones”), Indians are seen as particularly lacking in sex appeal. “We’re the lowest of the low,” he explains. “I’ve seen [posts] about how being an incel in India is normal, that most men are incels there so it doesn’t count.”

Similarly, when pictures of Indian men with white women are posted in incel forums, white incels justify the relationship by referring to the woman as a “betabuxxer,” or someone who has “settled” for a bad-looking man to retain leverage over him. An example Sharma sends me is a recent(ish) slideshow on incel.co of South Asian men with their “betabuxxers.” “What people fail to grasp is that these men were not the women’s first choice!” the poster writes. “None of these women picked any of these curry men as their first love. And they never would.”

Such comments obviously put Sharma in a difficult position. “I do agree with the majority of what the community believes,” he says, referring to how the role of men in global society has been minimized. “But I don’t think it’s because of race, because it’s happening in every country. So I don’t understand why the [incel] community is so obsessed with race.”

Also, many South Asian incels argue that they have it much worse than white ones. “U need looks, height, body, status, a decent job, degree, house, car, be charming, social circle etc. for Indian women,” an Indian incel wrote in a now-deleted 2016 post on The Red Pill forum. “Stop whining u white pussies. U have it much easier.”

Not surprisingly, Western-born South Asians have been met with similar racial animus as well. In fact, there are academic papers that explore the disadvantages young men of South Asian origin face in red-pill communities, with some going as far as to make their own private Facebook groups and WhatsApp networks. (Nevertheless, men’s rights activism and the manosphere as a whole is still thriving in India, with plenty of workshops, events and street protests for men who feel that anti-harassment laws are targeting them.)

“Incel isn’t a term that’s used a lot in India,” says Priya Alika Elias, the author of Besharam: Of Love and Other Bad Behaviours. “In India, it’s not really about men wanting to fuck more women, but just about how they can actually get girlfriends. The men [who are having sex] aren’t necessarily looked up to like they are in America.” Because of this difference, Elias suggests that there might already be cultural dissonance between young Indian men who are part of the incel community and their white counterparts who live in countries where sex in relationships is more common and accepted. Further, hostility toward Indian incels may be coming from the threat of competition. “White incels are probably unhappy with any idea of an Indian being a ‘game master,’” she says. “They see Indians as sexless. They also don’t feel that Indians are entitled to have sex with any woman — despite the fact that Indian incels are exactly like white incels. That is, they both spend all their time on forums feeling embittered by women.” 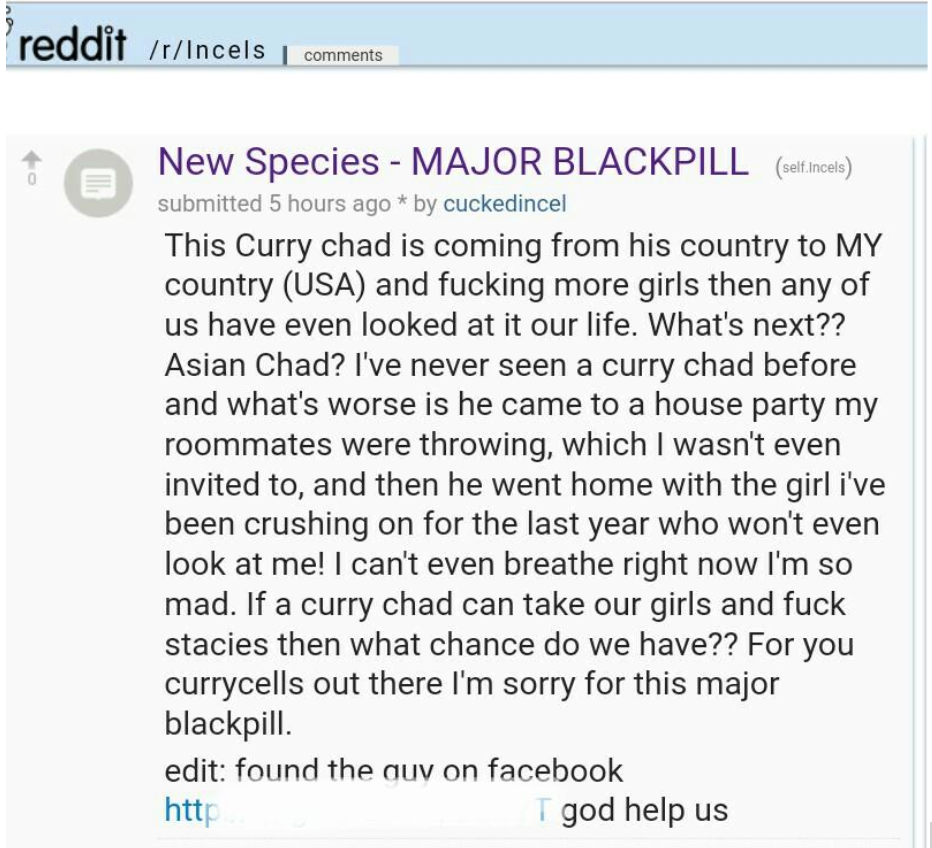 Still, Sharma has no plans to abandon his fellow incels — no matter how racist they might be. He believes that relatively speaking, being considered a “curry” isn’t the worst thing in the world, especially when he considers that the incel community “is the only place where my feelings about myself and relationships with women make sense. I cannot talk about these feelings anywhere else, not in school, not with friends. They will think that I’m not a good person if I say these things.”

So while Sharma says that “the [white incels] are ignorant about the world, I know that we’re feeling the same things — and that’s all that matters.”