In November 2019, Tesla rolled out its new electric vehicle, the Cybertruck. It received mixed reviews — to put it mildly. The most common critique was also the most obvious: Elon Musk’s dream truck didn’t look like it was made for people who actually drive trucks. Instead, it looked like what a child draws when they first learn to draw a car. It did, however, net a reported 650,000 pre-orders.

It also kick-started the rapidly growing EV truck market; if nothing else, Musk made the Cybertruck seem super-futuristic and next-wave. The legacy carmakers certainly heard the chatter. They were motivated enough that Ford Motors announced that starting in 2022, its “No. 1 truck in America,” the Ford F-150, would go electric; GM recently rolled out its all-electric EV Hummer; and Dodge announced it’ll also soon offer an electric truck. Then there’s Rivian: The Tesla competitor was just featured in Ewan McGregor’s latest globe-trekking docu-series The Long Way Up, with its electric trucks used as support vehicles for McGregor and his riding partner as they rode from the tip of South America all the way up to L.A.

But while it’s cool that everything’s going electric, what about all those clangin’-and-bangin’, dirty-ass, internal-combustin’, gas-burnin’ older trucks that we still love no matter how shameful that love may be? Is there any way we can keep our old trucks running wild in the oncoming electric future?

That’s where Zero Labs Automotive comes in. The L.A.-based startup restores old vehicles to modern specs and modifies what’s under the hood so the car or truck you love no longer runs dirty, essentially turning it into a custom electric classic, but one with a future. Imagine if a classic truck could go electric like Dylan did at Newport — it’s basically like that. No less an authority than Motor Trend was duly impressed when its reviewers got to drive the first-gen model EV Ford Bronco from Zero Labs.

Adam Roe is Zero Labs’ founder and CEO. He’s a former skateboarder, ad man and magazine publisher, having founded Pavement magazine. His startup EV car company is part of the industrial tech scene in the Hawthorne neighborhood of L.A., located just down the street from Tesla’s Design Center. (In fact, Roe drives past Tesla, in a Tesla, every day on his way to the office.) I recently spoke to him about EV trucks, his long-term production plans and Zero Labs’ rollout of its first line of custom EV trucks, which is scheduled for this fall.

The future is electric. And now, so is the past.

Zero Labs’ informal motto is “Soul of the past plus clean-energy future.” In real terms, what does that mean to you?

When you meet somebody who has an electric car like a Tesla, the word they use the most, in my experience, is it just has no soul. It feels stripped of history. It feels stripped of personal relevance. I think that that emptiness is a big part of what’s missing, but I also think that what they’re addressing is the function that nostalgia takes in our lives. People used to think nostalgia was this mental disorder. In fact, they would do things like apply leeches and do bloodlettings and really awful things to people who were nostalgic. What we found out later is that nostalgia has a neuroprotective function. It’s how we cope with the uncertainty of the future.

But there’s one other thing it does as well in that nostalgia is really a mis-remembrance of the past. It’s not an accurate representation. It’s like we strip it of the things that were not good, and we only remember the good things. So, in many ways, our function at Zero is to fulfill the more idealized version, more of the neuropsychiatric ideal version –– which is to say we’re giving you everything you love minus everything you hate. It’s what you loved about the past without the breakdowns, oil leaks, gas fires, constantly having to replace your clutches and deal with doors that won’t close — all of that stuff that we just forget.

Better yet, it provides people a connection to their past but without impact to future generations. Change is no longer optional. Things are going to change. And the best thing that we could do at Zero is help bring what we love from the past into the future, without causing a negative impact. 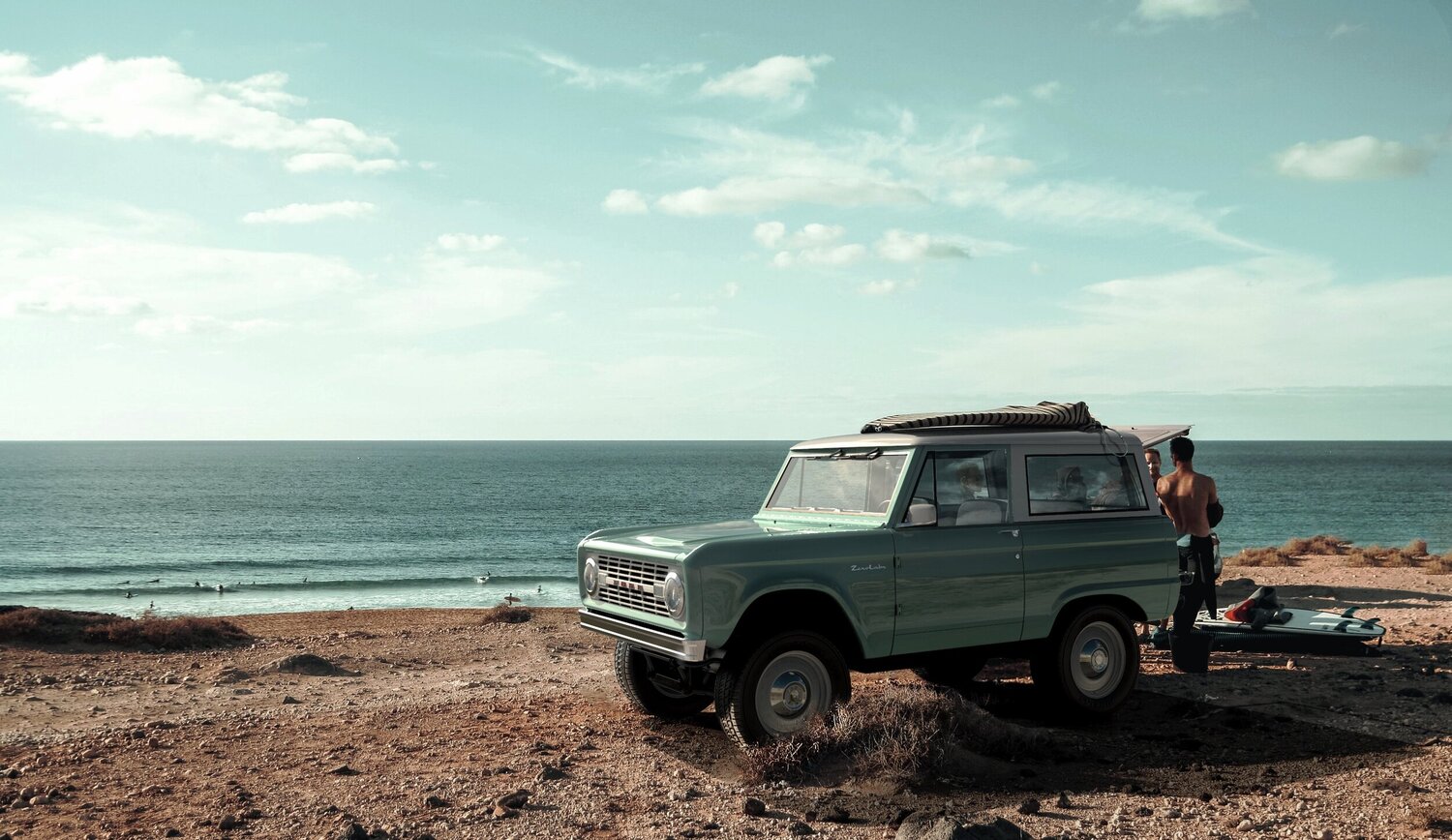 Who do you expect to sell these cars to?

Right now, our cars are expensive. They’re handmade. We’re not just taking classic cars and making them electric. We’re completely rethinking the way they’re put together. Because you can’t just slap an electric motor in a 50-year-old vehicle and go, “There you go!” You’re still going to have drum brakes. You’re still going to have leaf-spring suspension, and doors that don’t close.

So we strove for something a little more beautiful. We created a classic car that felt like it’s worthy of being part of the future. The first versions are really high-end. They’re perfected. You could look at them from two inches away, an inch away, and there’s no flaws. The first ones are more for people who are successful, but that’s not our end goal.

We recognized from the start that that’s not obtainable for most people. So the platform’s design was really to help support the large number of people who have the love of classics but don’t have the impetus to make the changes required to convert the old cars. We hope to get the prices way down on the platform, so we can support this much larger market.

This year we plan on doing probably 50 or 60 cars. We’ve got it really down now. But we’re being very careful on how we want the first few of them. I’d rather do a much better job on fewer vehicles. Even if that costs us some revenue this year, that’s fine. 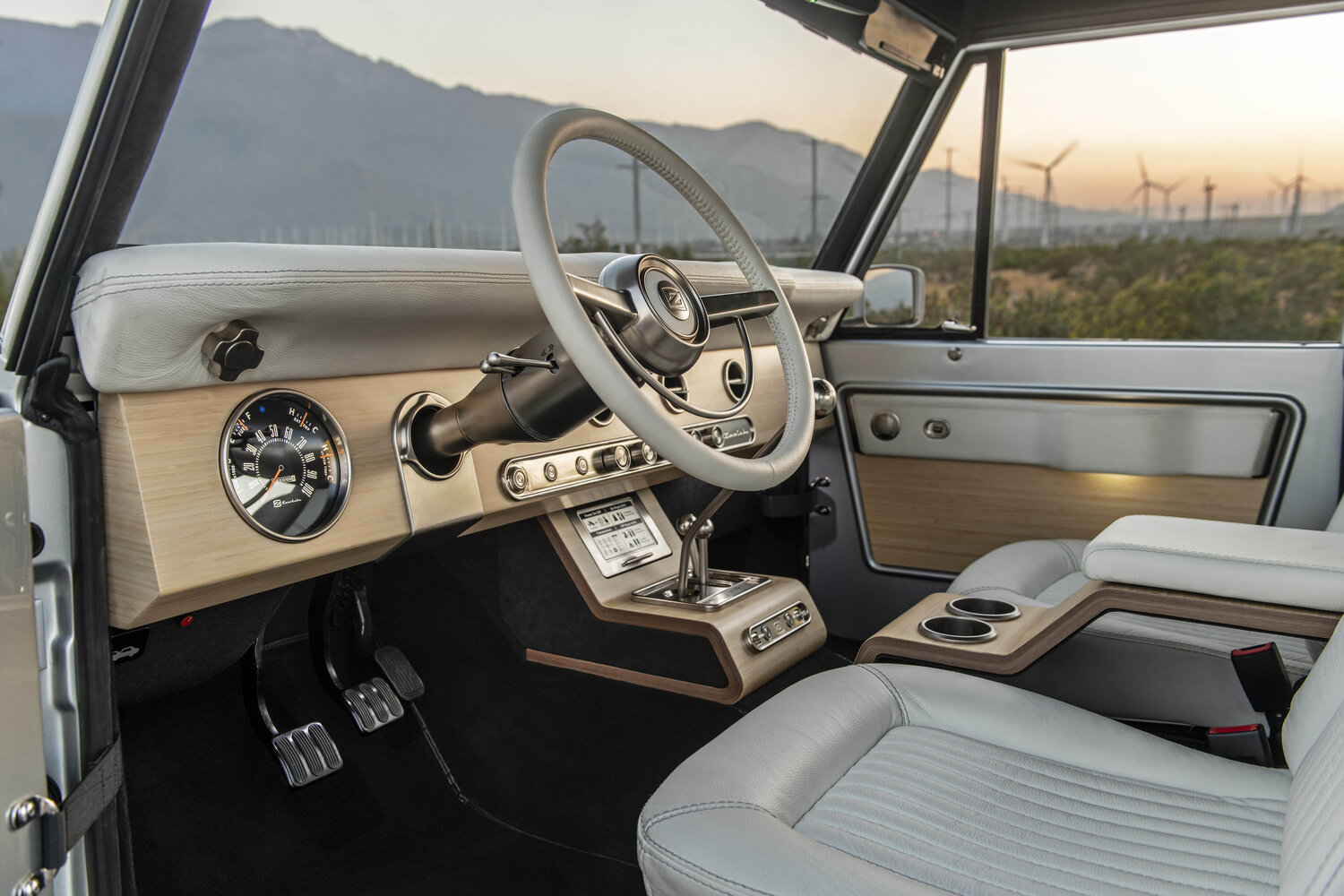 The customers that are ordering, are they selecting the Broncos and Land Rovers you offer — the platforms that you’ve put forward — or are more people coming to you wanting to customize cars they select?

At first, they just wanted the Broncos. Then we had a lot of requests for other vehicles we were already doing. The Land Rover was already in development. Right when we launched the Bronco, we already had a platform designed for it. When we looked at the platform, we were like, “This is it.” This is the platform I designed when I had my last company, as far back as 2015. But we held off on that because we wanted to see how the market felt, how far is too far to go. We didn’t know.

We get all these calls like, “Can you do my truck? Can you do my Scout?” We’ve had everything from Russian firetrucks to two or three Model A requests. But some of them are already vehicles we’re doing anyway, like the Defender 110s. We’re already doing that. F-150s, F-250s — we’re already doing that. We’ve got several of those on the way. We haven’t shown anybody those things yet, but they’re in production. I’d say by the middle of next year there will probably be eight or nine different models, all supported by the same idea. 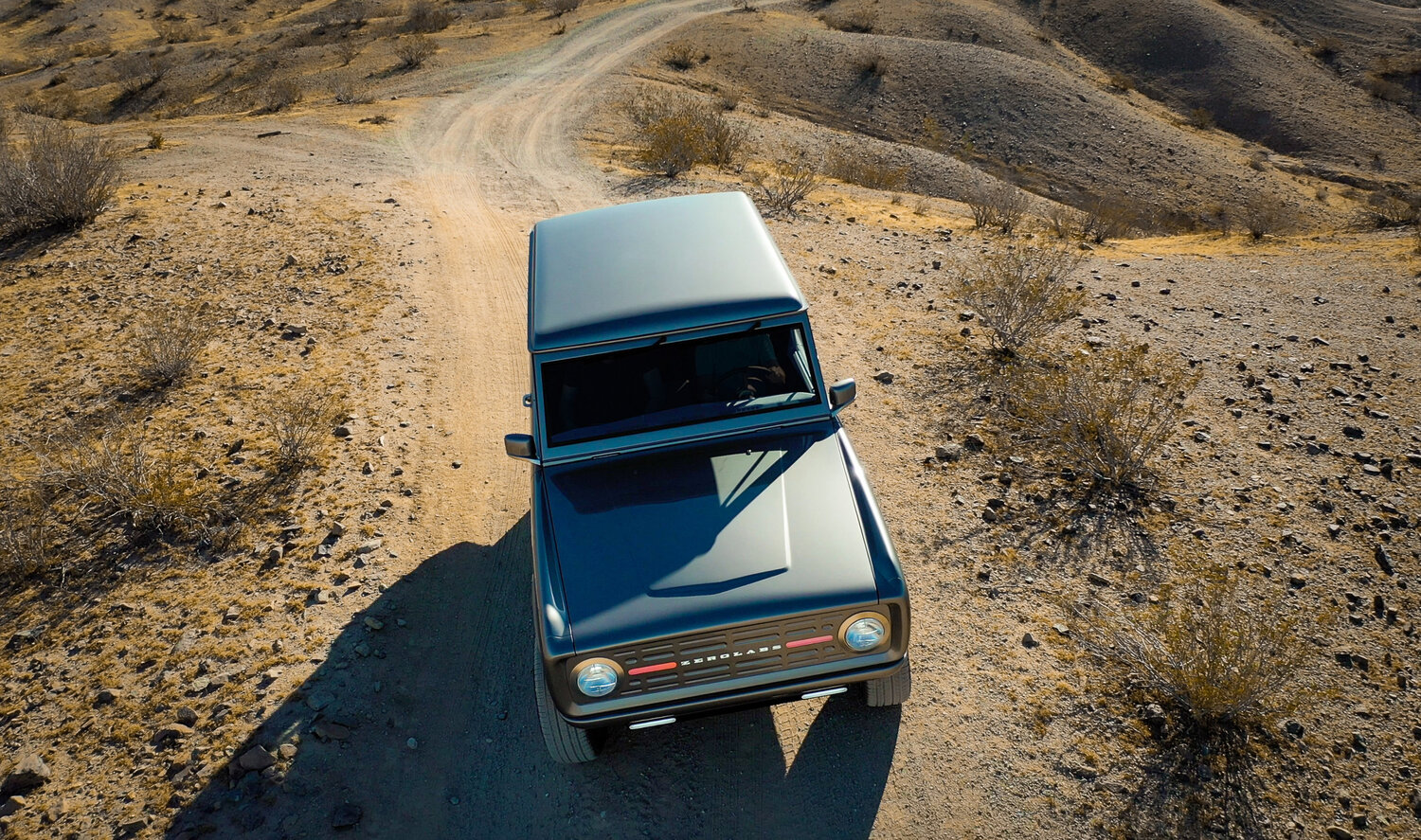 There’s two reasons for it. At first, we liked the pre-1976 cars because, first of all, they’re pre-EPA and CARB certification, which means that they’re probably the worst offenders, but also they’re typically higher value. The reason we want to pick one that’s higher value is there is a cost to this. It doesn’t make sense to put the cost into a car that’s worth $8,000. Like a 2004 Toyota Camry probably isn’t a good candidate, whereas something that’s a cool car and rare is worth continuing.

As far as the computerization, that’s part of it. But it was also a lot of plastic. In the 1990s especially, there’s such a proliferation of plastic. A classic car is defined as something that’s technically 25 years or older. There’s no consistent agreement on what classic car means, but “25 years or older” is probably the most common. Well, that’s 1997. You think about what happened in 1997, those were all plastic cars. We like the ’76s and before, because there’s an integrity to them. They’re typically considered higher value, and there’s a more personal connection to them. 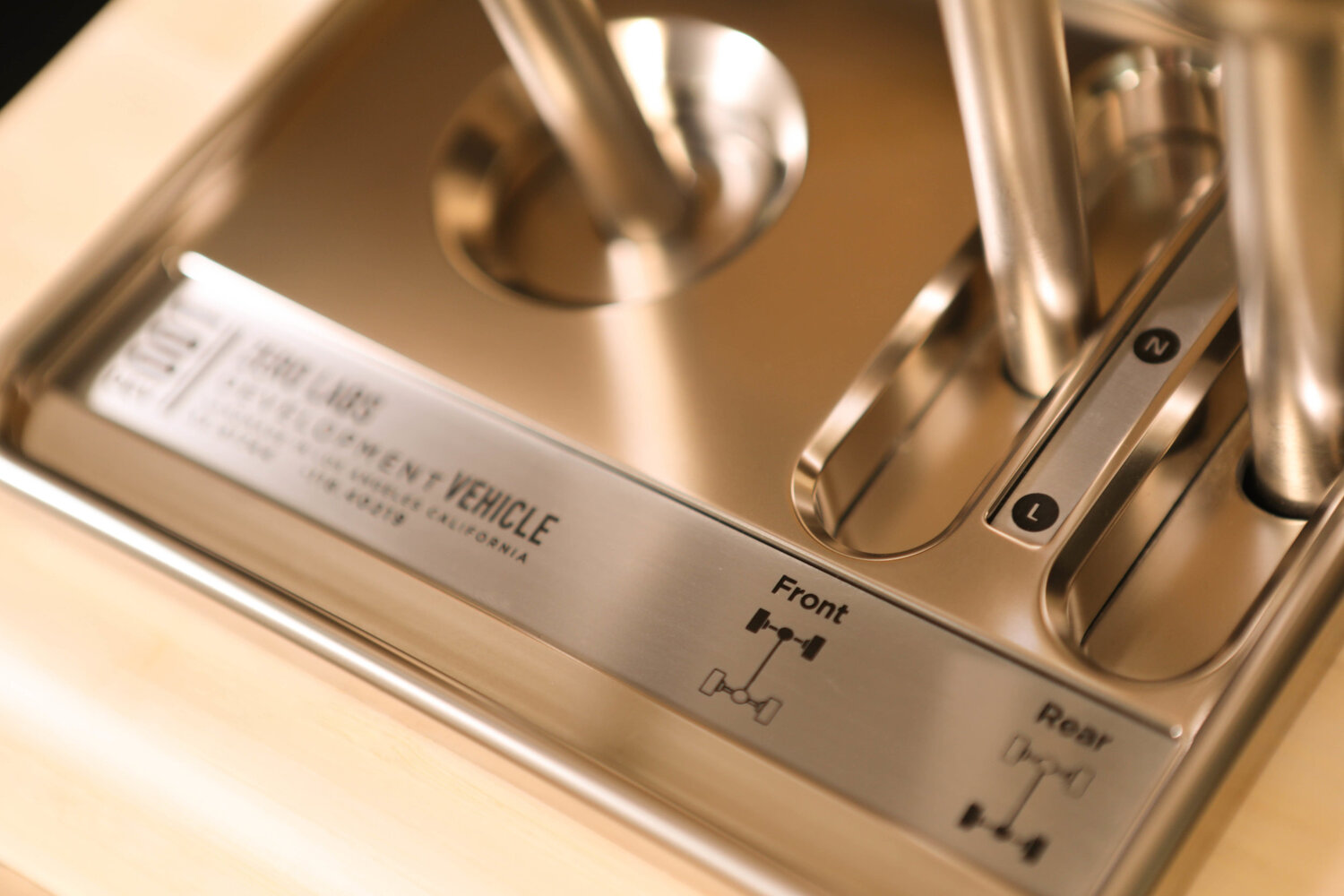 This notion that classic vehicles represent how we keep the past alive is very Faulknerian. How much does the past and keeping it alive drive your business philosophy? As we’re all wondering what we’re going to keep as we move forward, is that an organizing principle for you guys, a positive challenge?

I’ve used this analogy before, but imagine if MP3s came out in like 1993. Imagine that the record company said that they’re never going to make any more toxic, polyethylene thermoplastics ever again. The records and cassettes are just too toxic. And so all the music moving forward would be digital and that was it. Then, imagine if they had no interest in supporting the old albums, and they’re just going to focus on being the leaders of the new clean, zero emission, digital music albums. What would be left?

There would be a fraction of pre-1993 music. People would get together, share their music with their friends on weekends, but they wouldn’t have the rights to reproduce those albums, as they didn’t own the rights to digitize them. That means that all the music before 1993 would be lost to history. Except for what a few people labor to keep alive. The vast majority of music would be unable to make that digital technology gap. Well, that’s happening in cars right now.

The whole history of cars isn’t just going to jump to the future. Our job is to digitize the classics, so to speak. To bring them forward, the best we can. We’ll never do all of them. But we’ll do as many as we can. That allows us to keep what we love about the past, while recognizing that loud and smokey and toxic just isn’t acceptable anymore.