It’s another examination of a trash meme that speaks volumes about the way we live now. You love to see it.

In the course of a day, you see some things. It’s only natural. Objects, people, events — you see it all. Unless your vision is impaired, and sorry if so. But when I use the verb “see,” it’s really a shorthand, and it doesn’t necessarily imply the function of eyes: It means you experience a thing, or simply become aware of it. The thing appears, it impresses itself on you, and you may then interpret its meaning. Most things are neutral, beneath a threshold for conscious evaluation; you probably do not waste brainpower considering the sidewalk as you stroll down the block. But a great many things can stir feelings or opinions, and these are largely sorted into positive and negative categories. Putting too fine a point on it: some you love, some you hate.

And so, there’s a verbal meme you’ve likely noticed creeping into the online argot, where it seems to bifurcate the good from the bad: “you love to see it” and “you hate to see it.”

Sports fans are the key demographic within this mirrored phenomenon, judging as they do each element of a game, season or career on its relationship to a desired outcome. Note: some people will try to tell you a Barstool Sports writer came up with “you hate to see it,” and I’m sure he did help to popularize it over the past couple years. But Barstool is a revolting cesspit of hate, so let’s give the credit to Dr. Cox from NBC’s hit series Scrubs (2001–2010), who almost certainly said it first: 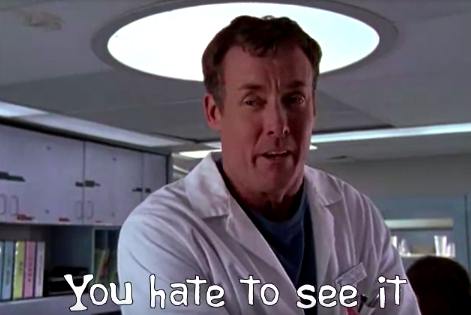 Anyway, sports. You love to see your team play well, and you hate to see their head office make an unfortunate trade. Whatever occurs in this world can be categorized according to your hopes and needs as an observer of the competition. 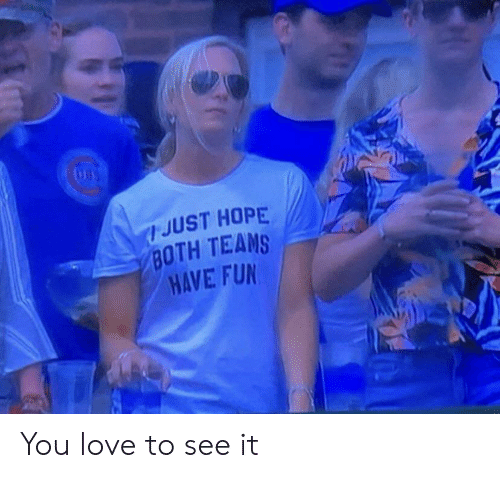 Of course, one fan’s victory is another’s loss, and so you quickly realize that loving/hating to see the proverbial “it” is a way to flex your subjective frame. As such, the statements also offer semantic wiggle room for irony and other layers of tone. If the website Splinter publishes a short blog post describing how Donald Trump and Benjamin Netanyahu publicly joked about their mutual corruption under the headline “You Love to See It,” it’s a safe bet that the writer did not truly love to see it, but deployed this phrase in a mocking familiarity with the profound shittiness of these two men. Here its function is to say, “Welp, the greasy bastards are doing what they do, and we’re still fucked, as usual.”

Likewise, you might “hate to see” an “it” that is nonetheless comforting in its unavoidability: an ATM overdraft, a hangover, an internet backlash. And either comment can mean the precise opposite, or quietly strike at your ambivalence. It’s like in Seinfeld, when Jerry says “That’s a shame” with pure sarcasm, draping fake sympathy over the fact that he doesn’t actually care, or enjoys the schadenfreude.

Another wrinkle here is the sneaky presence of the second person. Although you indicate your own point of view with “You love/hate to see it,” you’re not saying “I love/hate to see it.” The you invokes an audience, which makes sense, because our online monologue is designed, packaged and delivered for mass consumption. It functions, on that level, as instruction or guidance: “I love to see it, and if you’re reading this, then you should, too.” In a polarized cancel culture where identity is closely tied to the side you take in a given dispute — the individuals and politics you choose to condemn or elevate — a plain signpost is often welcome. If this gets the “it” in question to the feeds of people who wouldn’t see it otherwise, so much the better; now they know there is another “it” to love or hate, and they can proceed accordingly.

There’s no denying that the formula, though not quite as reductive as it first appears, feeds on our hunger for black-and-white duality in this maelstrom of complexity we call 2019. The challenge of our time is to process more information than any human has previously encountered and decide, at the very least, which parts of this vast reality we like.

This isn’t the first meme to address that need, either. I’ll fall back on the Drake example, as his alternatingly thrilled and dismayed reactions at NBA games happen to jibe with the sports analysis offered above. Besides, you’ve definitely encountered this template, constructed with two shots of the rapper in the music video for “Hotline Bling.” In the first, he looks to be pushing something aside or trying to block it out. In the second, he’s pointing and smiling in approval. To the right of these images, you place the two things you want Drake to shun and embrace, respectively. A basic instance: 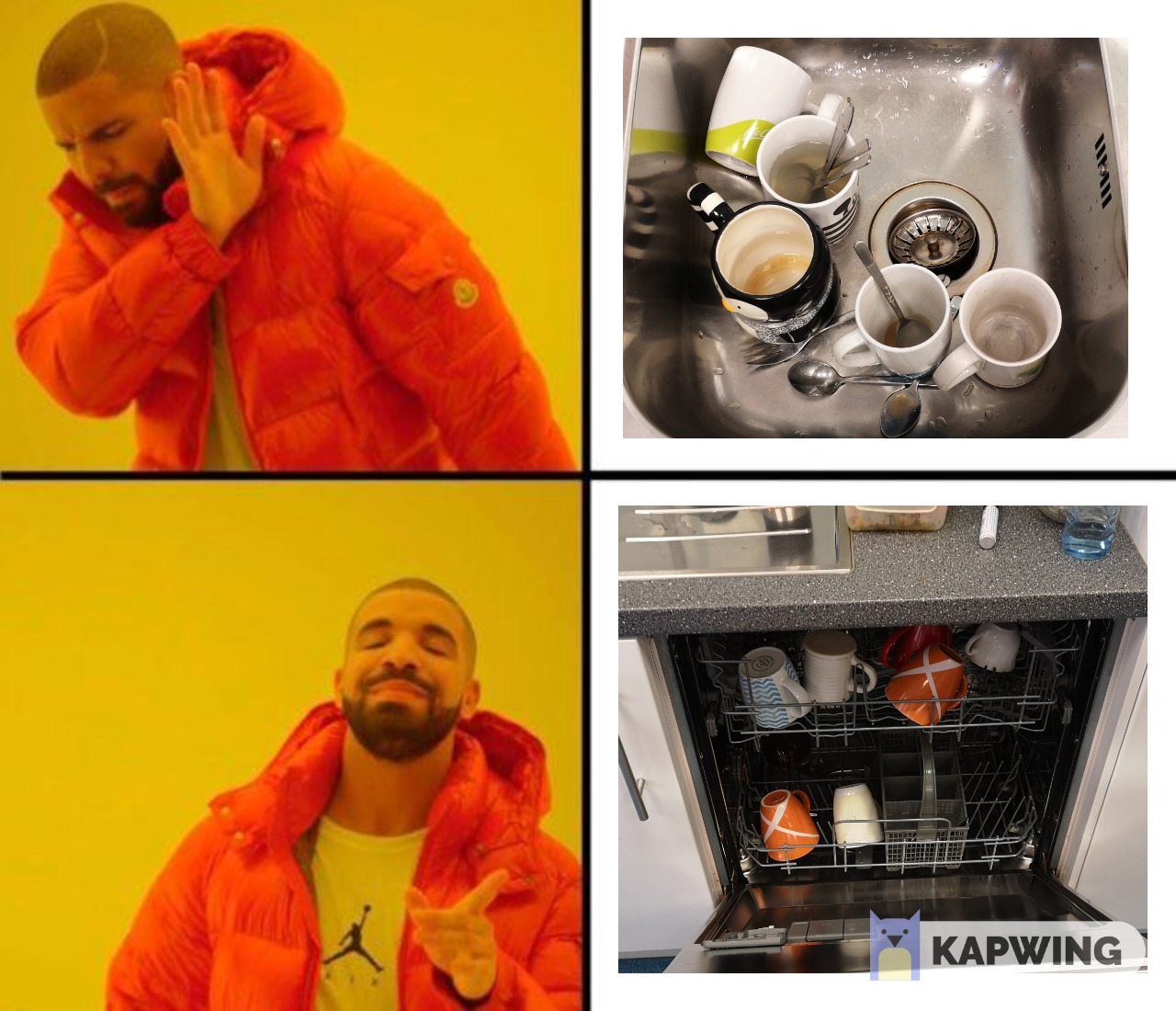 Now, if we to map this pattern onto “you love/hate to see it” to illuminate the parallel:

Again, the claims here don’t have to be earnest. Shitposters exist, and they’re happy to have Drake point at something dumb while ignoring something smart. On that front, you have to acknowledge how “love” and “hate” are frequently exaggerated or inverted when it comes to Twitterfied discourse. This is a web where people “hate-read” and “hate-follow” for the love of annoyance, no less. Indeed, what would social media be without that person you “love to hate,” or hate yourself for loving? Maybe these emotions present as spectrum, not a dichotomy. In which case, saying “You love to see it” or “You hate to see it” is possibly more confusing than silence. We pretend to want clarity in our thinking, yet we have a knack for smudging and distorting or own voices, usually just for the fun of it. We hammer an idea until we forget its original shape.

What, then, is being communicated here? Return to the verb: to see. Seeing has the quality of discovery, as if you’ve uncovered a truth — or stumbled across a meme. However, it also betrays a passivity: We see what the algorithm serves up, and we see what friends or enemies have shared as we continue the endless refresh. When you’re logged on, you’re keeping a vigil for anything that could be worth seeing, and though you participate in conversations around those things, the bulk of your activity is absorptive. You’re sitting there, seeing and receiving through a filter of satisfaction vs. resentment. Can you change what you’ve seen? Usually not. You certainly can’t unsee it. This bearing witness — the role of a witness — is, to me, the crux of loving or hating to see something. We are prisoners of our gaze. We won’t put our phones away. There is so much we’ve seen already, and so much we are doomed to see some other day.

No wonder we grasp for the words to explain how we feel about it all.