If You Chose Your College Major for a Silly Reason, You’re Not Alone

Turns out none of us was actually prepared for higher education

Choices! Everyone makes them. And we’ve all made bad ones. But few of our silly choices have such reverberant effects as the choice of what to study in college, or what career to embark upon. After you’ve spent a decade or so in the rat race that is American adulthood, you probably have questions for the 18-year-old who got you there. In my own case, it would be: Why, if you’re already majoring in English with the pitiable idea of being a novelist, are you adding a philosophy major, which entails hours of arguing with some of the most unpleasant, pretentious students on campus?

I guess there were reasons. Maybe I’d go on to law school. Maybe I’d learn to justify whatever I did with a quote from Plato. Given the option to do it over, I’d go with art history instead. Equally impractical, but at least you get to look at nice paintings.

The good news is that majors aren’t especially important — although my philosophy background does come in handy when I’m analyzing the latest meme trend — and virtually everyone has a What was I thinking?!?! spot in their education narrative. It wasn’t, however, until I read a Reddit post about a guy who wound up an English major because of a former teacher’s “massive titties,” and “despite having zero interest in reading books,” that I came to this conclusion. 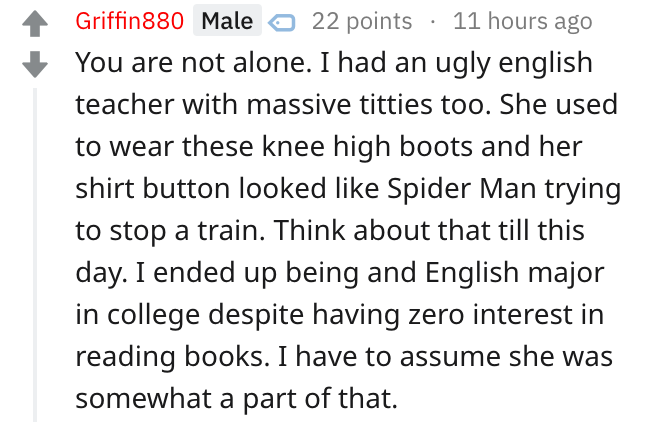 Is academic trajectory as random as a few rogue high school boners? After asking the internet for the embarrassing rationale behind their course of study and professional aspirations, I’m convinced.

To begin, we must consider how poorly suited youths are to predict the future. Not only do they have the vaguest idea of what an actual labor market is like, but they fail to account for drastic changes to the landscape. This was the tale that several colleagues in media told.

But if you’re curious as to how people gravitate toward schools, subjects and jobs that don’t turn out quite as imagined, well, there’s no shortage of misleading signposts on the way to maturity. I can extremely commiserate with the respondent who was swayed by humorist Dave Barry.

Quite a few folks mentioned a favorite movie or TV show that (unduly) shaped their concept of the field they entered. Sex and the City, The West Wing, Bones and The Devil Wears Prada are repeat offenders in this regard; Mad Men and Silence of the Lambs have much to answer for as well.

Such understandable enthusiasm pales in comparison to anecdotes from those who were guided by a host of emotional variables, from spite to love, and yes, sheer horniness. For some, it was as simple as not wanting to follow in the footsteps of a parent or sibling. Others had something to prove. I find myself especially intrigued by the guy who majored in geology “on a dare.” On Facebook, my friend Sarah-Louise tells me she picked a college rumored to have “lots of hallucinogens” floating around (and although this wasn’t the case, she doesn’t have regrets).

Then there’s what we’ll call the path of least resistance: Navigating higher education by avoiding the stuff you hate and embracing what comes easily. To an extent, everyone will naturally pursue the classes where they tend to excel; meanwhile, of course, there are students who will do whatever it takes to avoid math or a foreign language requirement. But for each would-be filmmaker trying to steer clear of calculus, there’s a poet who thought he was training to be a teacher. That’d be my pal Cody, who thought he had signed up to be in “adolescent education” and didn’t realize he was on a straight-up literary track until sophomore year, at which point he asked, “When do I start taking education classes?” and got a baffled response from his advisor. So he stuck it out with writing. Likewise, I heard of academic routes determined by schedule conflicts, showing up at the wrong building on the first day, pre-selected “placeholder” majors for the undeclared and not checking in advance to see if a school offered a desired program.

As beautifully humanizing as stories of laziness and inertia are, I have to hand it to the ambitious problem-solvers, too. Often in STEM fields, these are the people aiming to improve the world through hard scientific analysis — only to become gravely disillusioned about the reality of that field or their ability within it. Sure, you didn’t make it to Broadway with your musical theater degree, but did you fail to figure out how to genetically engineer non-cannibal lobsters?

What’s freeing about reading the rationales we have for decisions at the outset of adult independence is the epiphany that they’re basically all ridiculous. Leaning toward the “practical” rarely guarantees the security and stability you’re after, since nothing in life is permanent or immutable; going into liberal arts and humanities may lead to the heartbreak of doing unrelated work to pay off your student loan debt. One of the great lessons in college and the years afterward is that you just don’t know what you think you do — but you can’t learn otherwise without a good deal of trial and error. By graduation day, you’ll have experienced plenty of personal changes, too. You can’t perfectly plan for the future, but you can always make the most of the moment. And sometimes that means giving archaeology your best shot, even if it’s because you have a thing for Indiana Jones. Ancient artifacts aren’t going to find themselves!