The Lone Webmaster Keeping the Dream of Woodstock ’99 Alive

Woodstock ’99 was never going to replicate the free-love utopia of the festival’s first incarnation in 1969. The headliners included Fatboy Slim, Metallica and the Chemical Brothers. MTV provided live, wall-to-wall coverage of every act, and the promoters skipped the traditional farmlands of Bethel, New York, to hold the concert on a former air base about two hours upstate in the small town of Rome. The first Woodstock was free of charge. At Woodstock ’99, attendees were expected to fork over $150 for a ticket and about $4 for a bottle of water. The beatnik idealism of the show was dead and gone; Woodstock was just another for-profit music festival now — not that that mattered. The lineup was exciting, the stages were packed and about 200,000 fans made the trek to the grounds.

What could possibly go wrong?

Quite a bit, as it turns out. The revival morphed into an extremely vivid nightmare the moment the audience poured into Rome on July 22, 1999. There were huge infrastructural oversights: The few free water fountains around the festival grounds were stuffed with massive lines, and aggrieved customers smashed open the hydraulic pipes leading to the famous orgy of mud and filth that beamed out live to horrified parents around the country. Along those lines, Rome was too small to handle overflow demands; many of its shopping centers ran out of stock due to the demand of the ailing festival goers who were trapped in 100-degree humidity. Meanwhile, somebody had the braindead idea to hand out lit candles to everyone in the crowd for the Red Hot Chili Peppers’ headlining set. Bonfires blazed through the night, creating profound silhouettes of true Fyre Fest apocalyptica.

More seriously, there were at least four alleged sexual assaults reported in the midst of mosh pits for bands like Limp Bizkit and Korn, triggering an investigation by New York State Police. “At one point, I saw this girl who was body-surfing above the crowd and either fell in or was pulled into a circle in the mosh pit,” said David Schneider, a Woodstock volunteer, who was interviewed by an MTV reporter after the event. “These gentlemen, probably in the 25-to-32 age range, looked as though they were holding her down. They were holding her arms; you could see she was struggling.”

All of these crimes sealed Woodstock’s cultural reputation for years to come. In a column published in the aftermath, a San Francisco Examiner journalist dubbed the festival “the day the music died.” The show would be remembered as one of the darkest, most regrettable moments in recent pop memory. No surprise, there hasn’t been another Woodstock since.

That’s why it’s so shocking to navigate to Woodstock1999.com — which still lingers on the internet — and witness a makeshift hagiography for the most infamous musical festival in American history.

In many ways, the webpage looks exactly as it did on July 25, 1999 — the final day of its four-day occupation of Rome — where the effete sunniness of 1960s psychedelia was brutalized beyond recognition. A peace symbol fills out the final “O” in Woodstock; a garish, AOL-era color scheme napalms the screen with lime green, burnt yellow and fluorescent purple; a low-res dove perches on a guitar in the top left corner of the screen — the official symbol of the Woodstock franchise — emblematic of a time when the festival was most closely associated with the late-1960s country dawdlings of Joan Baez and Arlo Guthrie (rather than, well, the late 1990s dawdlings of G. Love & Special Sauce). At the top, there is bolded serif text, making the case that Woodstock ’99 was, actually, a whole lot of fun.

“As the moderator of this website, I have grown tired of the riot photos and stories all over the web,” it reads. “I have decided to change the photo and put up a rare story that I found that represents the way Woodstock should’ve been remembered. Hope you feel the same. Peace.”

That moderator is named Drew Auman. He is 43 and lives in Ohio. At 22, when he was barely getting his feet wet in adult life, his brother was working at Ohio.com. They both got in contact with the Woodstock organizers for media credentials to cover the festival for their home-state site, and Auman built Woodstock1999.com to be the central arm of his reporting. The 1990s were the wild west for domain names, which is why a twentysomething Rust Belt kid could register a highly sought-after URL with a trademarked brand name in the title without needing to ask anyone. But if there was a more official Woodstock ’99 hub on the internet, it has long been lost to digital erosion. Today, Auman’s site is one of the few primary sources of the festival — authored by someone who had boots on the ground — left on the web. 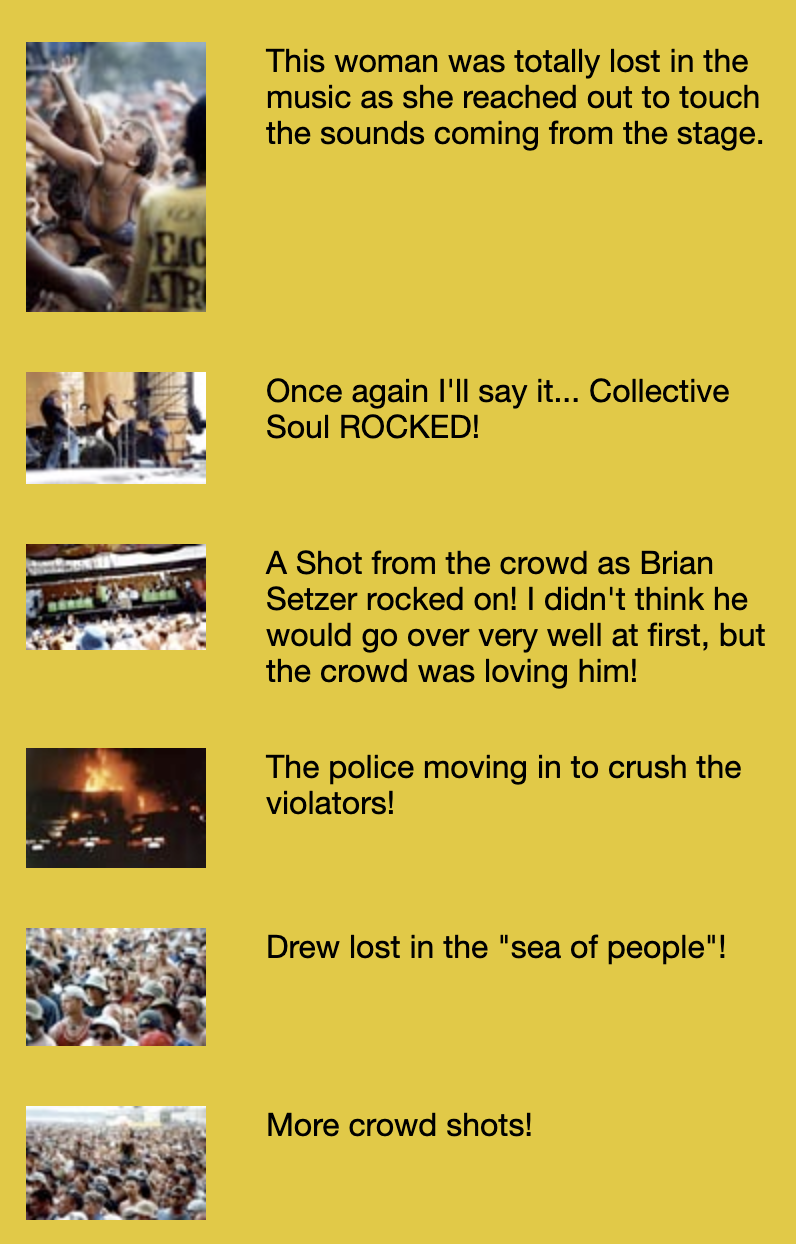 To that end, a link on the right side of the page leads to a primitive blog where Auman and his friends documented their in-the-moment thoughts during the run-up and aftermath of their three days on the road at the height of MTV excess. They were having the time of their lives. “I can’t wait til the next Woodstock and you better believe that we will be back here again, giving you the best coverage around,” reads the conclusion to his last entry, entitled “Final Thought,” which was posted on July 27, 1999. “Keep a watch on this web site as more photos, commentary and stories get posted. We still have a lot in store for you.”

Auman tells me today that the domain costs him about $10 a year. He never felt a need to stop paying for it. In fact, he barely notices when it renews. “I don’t want to destroy what it was. I haven’t modified it, other than to make it function,” he says. “The width of it only takes up 25 percent of the size of the screen. That’s because monitors weren’t that big in the late 1990s. That’s literally how it looked when we stepped off the project in the summer of 1999.”

Auman witnessed all of the chaos that made Woodstock ’99 famous. The bonfires, the mud, the outrageously high vendor prices are all imprinted in his memory. After he returned home from the festival, he watched the show build an established narrative: a butchered, crime-ridden insurrection filled with looting, hooliganism and nihilism. He absorbed every one of those stories, but in his heart of hearts, he knew he had a great time. The media turned against Woodstock ’99 for its troubling imagery and unimpeachable crimes, but you’ll never be able to convince him that he didn’t love every second of it.

“A lot of people who talk about it negatively weren’t even there. There were some pointed problems with some people, but you’re going to have that at any festival,” he says. “We spent a lot of time on the fairgrounds, and we had an absolutely awesome experience. People were generally friendly and were there to have a good time. In a crowd of 200,000 people, you’re going to have a few bad apples. The news started to pick up on what they thought the reality was, and one person writes a story and a whole bunch of people copy it. Most of the festival was perfectly fine.”

In that sense, Auman is at the forefront of the slow relitigation of what Woodstock ’99 meant to the music industry. For example, in a 2017 essay for Kerrang!, writer Ethan Fixell posited that for as much destruction, theft and criminal activity that Woodstock ’99 left in its wake, it was still the most fun he’s ever had in his life. Some of its most chaotic moments, like the sea of plastic bottles that filled the air during a Sevendust set, turned briefly euphoric in the lawless delirium. The crowd, “rejoicing and dancing, as empty vessels for Pepsi and Poland Spring rained down from the sky.”

“Woodstock taught me that nothing in this world is black and white; the capacity for both love and greed exist to some degree in all of us. The highest highs can come with the lowest lows; beauty can be corrupted,” Fixell concluded. “But mention Woodstock ’99 to me, and my initial feelings aren’t of guilt or disgust. They’re of joy, nostalgia and the thrill of being able to utter the phrase ‘Dude… I was there.’”

So many other Woodstock ’99 alumni echo that same dichotomy — the kindness and cruelty that coexist in the feverish moments after a music festival goes off the rails — and how that can add a new depth to their own perspective. They sound like Vietnam vets, reflecting on the ironclad brotherhood that solidifies in moments of supreme discord. Maybe Woodstock ’99 felt like a war zone. It certainly built character.

“I saw the good, the bad and the ugly. I learned that when people go down in the pit, people will rush in to help them up. I saw firsthand what guys will do to girls — grope them, rip their clothes — when no one is there to stop them,” writes one poster in a Reddit thread on the subject, who says they were 15 when they attended the show. “For all the negativity of the weekend, I came away a more learned person because of the experience.”

And so, Woodstock1999.com has emerged as a small nexus point for those who want to tell an alternative story about one of the best weekends they ever had. Among the most crucial corners of the site is its photo gallery, where passersby can witness scenes from the show that aren’t mudcaked, blood-soaked or consumed in inferno. Sometimes, Woodstock graduates use that database to relitigate their own personal missed connections. Auman tells me that someone once got in contact with him concerning an image of a particularly rowdy attendee. “He said, ‘I met this guy at the show, we spent a bunch of time together, but my girlfriend threw out his contact information, do you know how I could get a hold of him?’” remembers Auman. That emailer posted the photo on Facebook, and sure enough, the two friends reunited decades after first breaking bread in the East Stage slop.

Woodstock, as a brand, remained dormant for 21 years after Woodstock ’99. But there was supposed to be another festival under the name last summer in Maryland. Woodstock 50 — named for the 50th anniversary of the festival — booked a murderer’s row of Imagine Dragons, Halsey and Dead & Company for another loosely organized three-day adventure on a waterlogged racetrack. In the preamble to that event, Woodstock 50 began to take on a very 1999 feel: Venues constantly changed, investors dropped out and lawsuits ricocheted back and forth between promotion executives. (It was mercifully canceled on July 31st, two weeks before the event.)

If we do see another Woodstock, it will ideally be a huge mess, rankled with oversights and controversy, and yet still somehow prove life-altering for a few choice 22-year-olds. At this point, that’s practically tradition. “I’m not looking to change anyone’s perspective on it. I’m just trying to share an experience that someone else may have been part of,” says Auman. “They can reminisce on it. They can look and say, ‘Oh that was great. That was Dave Matthews,’ or some other band they really enjoy. I just want to take them back there.”