No matter how sex-positive and progressive they are, some guys still enter their therapist’s office trying to come to terms with their girlfriend’s sexual history

And yet, I’m not sure that my sexual prowess doesn’t also terrify them. Because no matter how far we seem to come in viewing women as sexual beings with needs and desires equal to men, there’s still a stigma attached to a woman who has a perfectly healthy sex drive. Case in point: The widely mocked attempt to dunk on Taylor Swift’s prolific dating life a few years ago with a gross meat-pussy meme. It seems hard to believe that anyone would prefer a skimpy sliver of lunch meat over a sandwich bursting with firmly pounded meat, but alas… 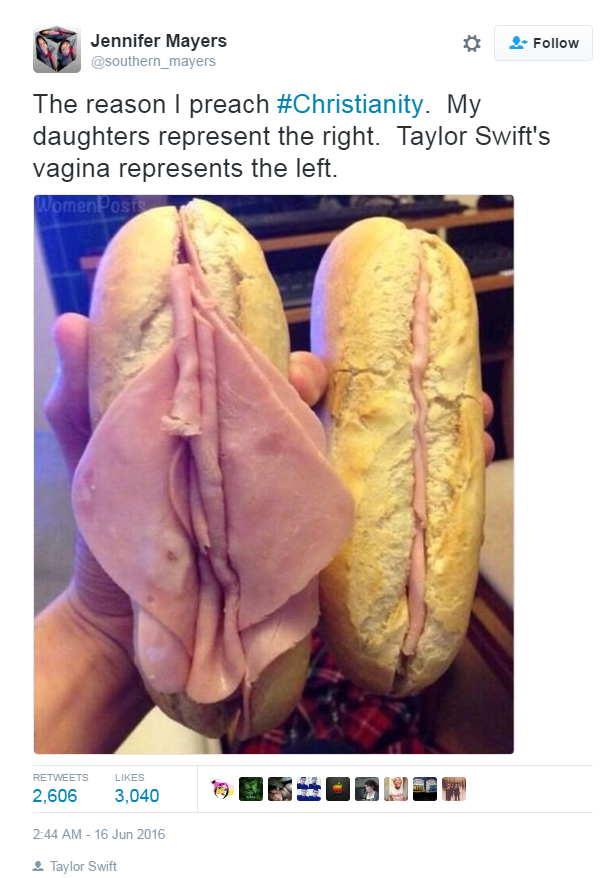 I guess what I’m trying to say is that I’ve found more than a few men who prefer ladies to act like they still have their hymens intact.

“In my experience, men get hung up over a partner’s past experiences more than women do,” sex educator Courtnie Keltner tells me. “It seems that people are still groomed to accept that it’s a given for a man to enter a relationship with previous experience, whereas a woman is supposed to be chaste, in a castle waiting for the one.” As for that chaste princess, Keltner adds, “Women tend to be more interested in what their partners are doing now. Are they talking to other women? Hanging out with their ex? Or how a partner’s past experiences might affect them — have they cheated on previous girlfriends, etc.?”

Ironically, it’s these same gender expectations that give men with little sexual experience anxiety about fucking, since men are expected to want (and have had) a lot of sex. More largely (but along the same lines), too many men spend too much time worrying if they’re as good in bed as their partner’s past lovers. “The most toxic reason men can be resentful when a partner is more experienced is that they feel entitled to her body and that previous partners somehow infringed on their property,” says Keltner. “If a man is shaming a woman, objectifying her as ‘his’ or otherwise being a huge dick about it, that’s a red flag.”

Plain old insecurity is obviously another major cause. “I worried that she had experienced better versions of the things we were doing in the past,” says Ivor, a 37-year-old from the U.K. who became very self-conscious when a younger woman he was dating had more experience than him. “I was convinced that I was redundant and inferior. I always tried to play to my strengths and stick to what I was good at, which had the negative effect of making me less willing to experiment.”

There was nothing his partner could do to help matters either. “We did have some arguments when she tried to tone down the breadth of her experience, almost certainly to spare my ego, which made it sting all the more,” Ivor continues.

Forty-one-year-old Omar typically dates older women and has found himself both intimidated by, and attracted to, their experience. “I definitely had anxiety about living up to their pasts and wanted to be someone who was memorable to them. I wanted to learn, but it really highlighted the insecurities I had about myself,” he says. “Fact is, I was a pretty terrible lover back then. I wasn’t in tune with what pleases a woman and was more into pleasing myself. Thankfully, that’s changed. I also had a nihilistic streak where I’d make them tell me all the details of what they’d experienced — and as painful as it was, I’d want more.”

Omar’s insecurities were also formed by growing up Muslim, where sex was never discussed and there was a lot of repression. “When I turned 15 and started liking girls, my mom flipped out and proceeded to monitor anyone I’d talk to,” he explains. “This led to a lot of intimacy issues, insecurities and problems with being open about sex with a partner.”

Certified sex therapist Lisa Yee has seen a rise in the number of male clients having issues with their partner’s sexual pasts, the reasons for which are extremely varied. “In a recent case, the male partner was completely devastated to learn that his girlfriend had sex with someone else while they were broken up years ago. In his words, the thought of being the only one to have been inside of her had become like a fetish and now his erotic energy for her had vanished,” she explains. “In another case, the man was struggling with his partner’s number of lovers being significantly higher than his because he equated sex with love and felt insecure that she was in love with all of her past partners.”

As with Ivor’s younger girlfriend, some women have been known to tone down their pasts to avoid the stigma of being seen as “slutty.” Yet, some of the men I speak to have done the exact opposite — i.e., a few have straight-up lied about their “body count” or said they’d lost their virginity when they hadn’t (only heightening their anxiety in the process). When I ask 38-year-old David if he’s ever fudged his sexual past, he answers bluntly: “Fuck, yes. Guys are perceived to be more attractive if we’re worldly, so you lie about how many girlfriends you had and the weird sexual things you did. I once told a sixth-grade peer that I peed inside a girl because I thought that was sex.” That said, he’s quick to clarify, “I don’t think I lie to partners. But to my friends? Sure.”

Luckily, all of these dudes have evolved. Most say that it was a combination of educating themselves and simply maturing that did it. “Open communication goes a long way in helping these issues, too,” Keltner adds. “If you can go to your partner and in a non-shaming way honestly say what the issue is, you can work through it. An open mind helps as well.”

The reality is there are many, many positives to fucking a women who knows what she wants and knows how to give you what you want — something 38-year-old David finally figured out last year with his now ex-girlfriend. “Initially when she’d tell me what she liked, it always made me think of some other guy doing it, which was weird. But in the end, I benefited a lot from it because she knew exactly what she wanted and wasn’t afraid to tell me, so the sex ended up being good for both of us.”

Todd, a 47-year-old in Kansas City, found the same thing to be true once he left behind his own religious hang-ups about sex. “I know who I am now and I like myself,” he tells me. “It’s amazing how finding peace within yourself can unlock a bunch of other hang-ups. Now I’m dating a woman who says that she ‘used to be a slut’ — her words, not mine. We have a healthy sex live, and honestly, it’s great because we both know what we like and talk openly about it with each other to help the other person get off, which just draws us closer together.”