‘Mother,‘ ‘Girl,’ ‘Wife’: Why does all our cannabis have these weird womanly names?

Because cannabis was largely a black market for many decades, the history of branding and marketing different strains is shrouded in a dank cloud of mystery. When you smoke Sour Diesel, it may not be the Sour Diesel, a strong hybrid of contested provenance that, according to some, was named for the jealous feuds it stirred up in the 1990s New York weed scene. Legalization hasn’t added much clarity to the art of naming strains. True, if you buy an eighth of Pineapple Express, it’s likely just an homage to the stoner flick Pineapple Express, as no such strain existed before the movie.

But then you have altogether weirder strains, such as… The Wife.

(No, I don’t think it’s named after the Glenn Close film.)

It’s worth mentioning that more than one expert has judged the claims to highly specific effects from a given strain to be fairly bogus — up to and including the idea that the two main branches of cannabis, sativa and indica, have predominantly “active” or “relaxing” properties. It’s not that you won’t notice a range of bodily responses if you try everything from the pot shop; it’s that we’re basically guessing (or relaying anecdotal experience) when we say this one makes you feel euphoric and creative, while that one is good for anxiety. Of the 100 or so cannabinoids in the plant, we only really pay attention to THC, the compound that gets you high, and CBD, which is valued for medicinal purposes, though occasionally oversold on those same grounds. 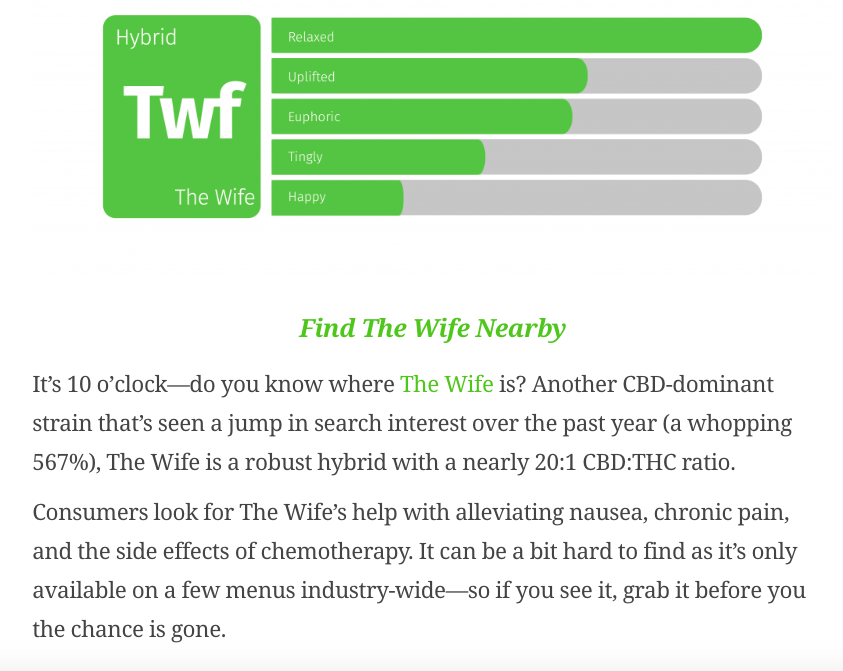 So if you’re selling a high-CBD, low-THC strain — the kind that might help with pain or nerves but won’t have you bingeing an entire season of Guy’s Grocery Games — you might give it a gentle, reassuring name, one that indicates the alleged benefits of choosing this exact product. Behold: “The Wife.”

Seems like the title is working, too: Leafly declared The Wife to be one of the top-trending CBD strains of 2018. Assuming this isn’t the result of a bunch of stoners clicking around the site thinking it’s eHarmony, this could indicate the value of a “softer” name to contrast with stuff like Toxic Punch and AK-47, which aggressively hype their potency.

But there’s reason to suspect the suggestive power of the name itself can color one’s experience of a strain. Take another gendered strain, Mother’s Helper, much higher in THC yet still praised as “daytime” weed that lets you “stay alert and clearheaded.” Another reviewer felt “mental clarity and focus.” Even the way MH’s promised euphoric quality is described proves rather telling: “This strain is wildly uplifting, so if you started your day in a bad mood, this bud can help you reverse just that,” declares cannabis grower Robert Bergman. All this happens to square with the midcentury concept of “Mother’s Little Helper,” as exemplified in the Rolling Stones song: an addictive prescription pill for housewives charged with domestic errands and duties. (“And it helps her on her way, gets her through her busy day,” sings Mick Jagger.) 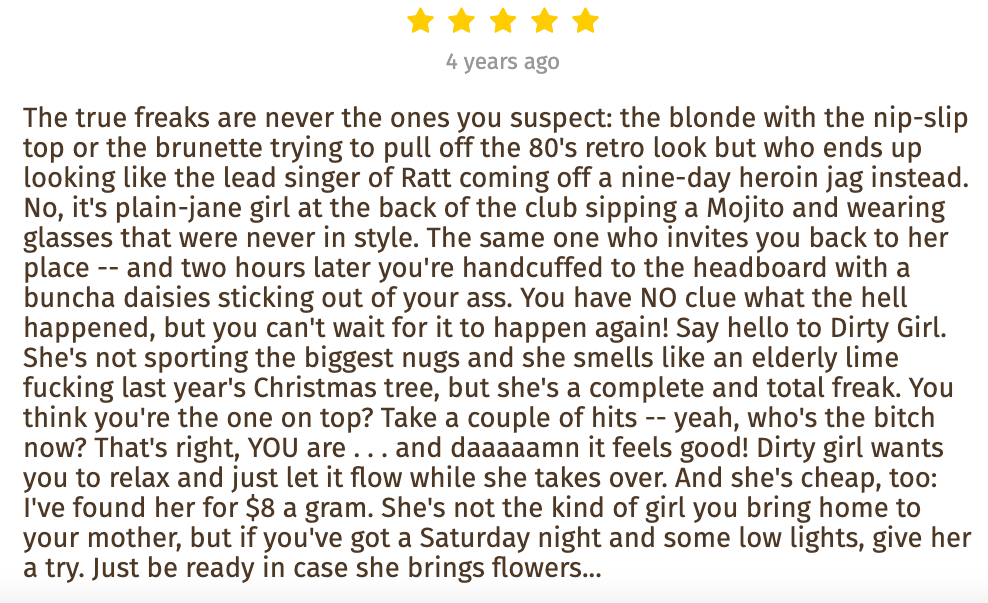 Then there are the girls. Dirty Girl (reviewed in punishingly sexual metaphor above), Valley Girl (for a “high-school high”), Early Girl, Thai Girl, Jesse’s Girl, Mountain Girl (which, hilariously, one reviewer found ideal for not for outdoor adventure but “baking, or cleaning, coloring, knitting, etc.,” as well as doing laundry, or anything “that is normally so mundane you can’t handle it”), plus Suicide Girl, Dream Girl and White Girl, a strain that offers an “uplifting” and “talkative” sort of vibe, and for which Leafly supplies some further info that would be devastating out of context: “White Girl’s effects are middle-of-the-road.” (Guys, I understand that you cross-bred Berry White and Girl Scout Cookies, but “Berry Cookies” was right there! At least it wasn’t “Girl Berry.”)

Meanwhile, the boys are few and far between, though when you do come across RudeBoi OG, someone has a suitably rugged take: “I laced up my running shoes and took the dogs for a moonlit run.” Not so for Wonder Woman, a strain that one person says they “would love to use … to smoke and study or stay home and get stuff done aroun[d] the house.”

No, if you really want some truly gonzo buds with a feminine flourish, you have to leave the girls, the mothers and even the lady superheroes behind and get ahold of Trophy Wife, which “packs a punch with a sweet, delicious taste” and “is known to melt stress and leave its users relaxed, euphoric and happy.” Kind of like having sex with a woman half your age who wouldn’t give you the time of day if you weren’t disgustingly rich — am I right, fellas? No wonder she took the runner up prize for Most Potent Flower at the Seattle Hempfest Dope Cup last year.

Ultimately, I suppose a man’s life is all about finding women to fill these roles: a mother to raise you on her milk and kindness, a bunch of girls to fool around with when you’re young, a wife to care for you like Mom did, and then a kick-ass trophy wife when you inevitably grow tired of her support.

Thing is, naming strains after womanly archetypes (some supplied by ’60s and ’70s rock bands) turns out to be redundant. The beauty of pot is that whatever you smoke comes from the female cannabis plant, never the male. In what feels like a suitably radical show of feminist justice, the male plants are used only for breeding — and most growers throw them out regardless, in order to cultivate buds from the females without male pollen screwing up the process. You hear that, dudes? You’re not helping. Just go in the other room and play your Xbox while women work on the miracle that is this natural salve for most of life’s pains, both physical and mental. Sheesh. 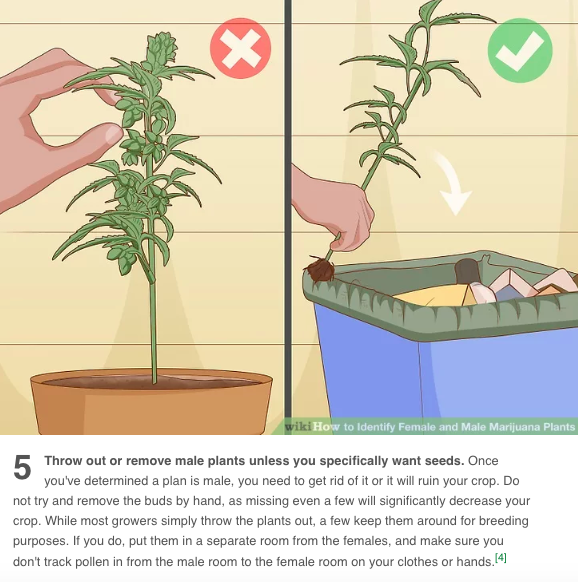