Why We Fetishize Working-Class Hands

The calluses may be arresting, but it’s the stories we imagine behind them that really get us going

“I don’t necessarily find the blood attractive, but I think these hands tell a story of a hard-working man,” says Australian photographer Karen Tregoning, of an image she took of her husband’s hands after a day of work on a construction site. “I think the hands of hard-working men are interesting because they make you wonder about what that man has done in his life.” 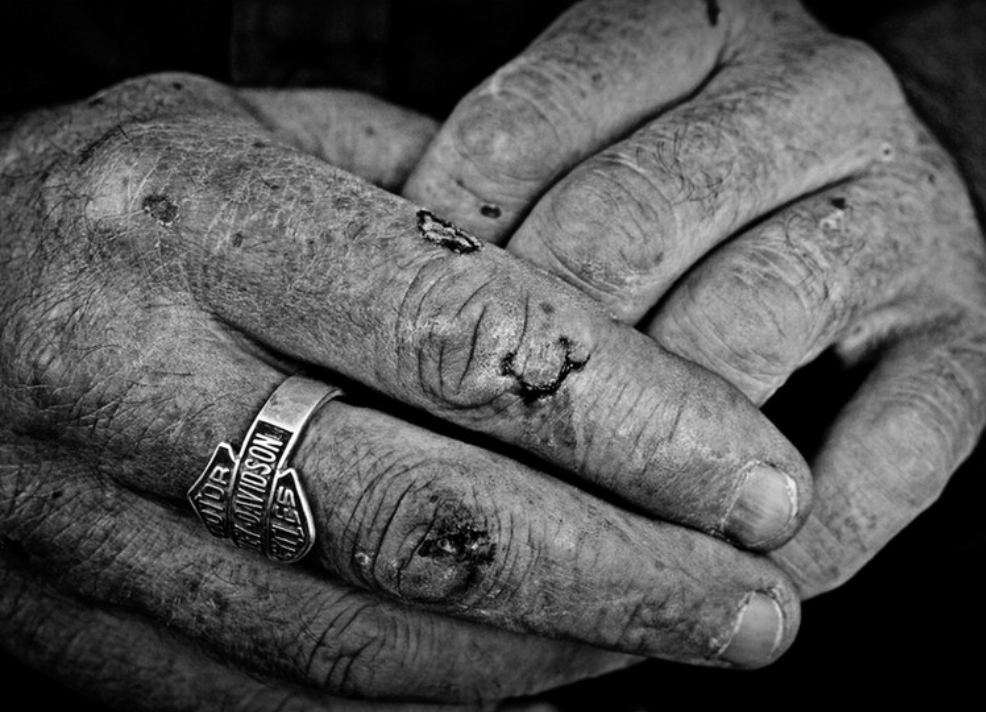 Evidently, what he’s done to earn those rough, worn-out hands is the sort of work that our increasingly cubicle-bound society loves to romanticize: Manual labor. Take, for instance, this 2016 New York Times article about that twinkling pull to quit your desk job in favor of a job that requires “working with your hands.” “During a long drive in the New England countryside, Mr. [Shawn] Kelley, [a 42-year-old stonemason in Portland, Oregon], stopped to admire a series of stone walls,” writes Sridhar Pappu. “He saw the effort that went into them. He liked the idea of taking heavy objects of different shapes and sizes and forming them into a cohesive whole. Soon after that epiphany, he began calling stonemasons, seeing if he might find work.”

Similarly, in 2011, the BBC ran a piece asking, “Is Working With Your Hands Better Than Just With Your Head?” In it, they spoke to writer and mechanic Matthew Crawford, who “thinks a lot of us would be better off trading in our mouse for a screwdriver.” “Imagine you’re an electrician, you’re installing a conduit pipe and have to bend around the corners to make everything line up,” Crawford told the BBC. “It’s the kind of work that requires improvisation and adaptation. It can never be reduced to following set procedures.”

The point is, we’re all very aroused by the idea of a more tactile, grease-under-your-fingernails, I-built-this-with-my-bare-hands lifestyle. Sure, it’s more physically taxing, but the inclination goes, “I bet it’s more satisfying.”

This idea of “suffering now = fulfillment later” — so neatly captured by a pair of battered, worn-out hands — is at the core of our cultural proclivity for glamorizing struggle. “I’m a working man,” intones Craig Rygaard, an ax man on the eponymously named History Channel show, as he showcases his mangled fingers for the camera. “These knuckles aren’t the knuckles of an ordinary hand that have done a soft life. Two hands right here represent what I’ve used to make my living all my life.”

Rygaard is the sort of manual laborer that’s so often applauded as the backbone of the American workforce, regardless of the fact that his best interests, let alone his dignity, may be neglected by the very politicians who love to shake his battered hands, hoping some of his grit will rub off onto them. He’s the sort of guy they talk about when they talk about a “true American”: “I’ve always been able to take a pretty hard knock and just come back for more,” he says in one episode. “My hands, more than any part of my body, have taken a pretty hard beating over 40 years of working. Now I’m paying for it. I’m a working man. It’s all I know.”

In that regard, it’s clear why working-class hands have earned their own subset of American lore: If soft, white-collar hands are a dull, blank page, then gnarled and blistered hands are etched in stories. “To me, as a photographer, it was all about the story that they tell or the story the viewer might imagine,” explains Tregoning. “Somebody might think these are the hands of a fighter, because of the blood.”

Photographer Tim Booth, who composed an entire series on worker’s hands, tells me that his fascination with worn hands is based on the very human obsession with personal histories. “In worker’s hands, you can really see the passage of time,” he says. “It’s so much steeper in a way. They’re not just worn, they’re shaped by the life they’ve lived. Different professions affect the shape and texture of a person’s hands.”

Naturally, neither Booth nor Tregoning have much interest in office-worker hands as a subject. “Clean, manicured hands are a bit like a suit in the city — they reveal little of a person’s character or life, save for the fact they either look after their hands or have led an indoor life,” says Booth. For him, the appeal of working-class hands is all about the texture, the cuts, the callused ridges. “Battered hands have ‘been there, done that.’ The owner’s achievement and struggle is etched into their skin for us to read.”

Booth tells me that his fascination with rough hands is also rooted in how we perceive ableness. “When hands are etched and wrinkly, that shows experience,” he says. “Especially in America, where we have the whole outdoorsman thing and the idea of being able to fend for yourself and survive, worn hands seem like capable hands — they’ll protect and keep you safe.”

And let’s be honest, in the rare case that anyone is sexually fetishizing hands, they’re not talking about soft ones. “I love rough manly hands,” writes one redditor. “They make me feel protected, if a guy had soft smooth hands like mine I think I’d feel a bit uncomfortable.”

They’re the hands, in other words, of a man who knows how to take care of you. “I personally find it more comforting than anything,” my colleague Magdalene Taylor tells me. “I’d feel as though a man with very soft, delicate hands couldn’t properly protect me if needed. It reminds me of my grandfather, who was a deep-woods construction equipment repairman and chainsaw dealer.”

Meanwhile, another female colleague, staff writer Isabelle Kohn, says that her attraction to working-class hands is similar to why Booth and Tregoning want to photograph them — it’s the stories they tell. “If someone I’m into is a mechanic and I think they’re hot, I’ll admire his hands because they tell a story of what he’s passionate about,” Kohn says. “If his touch is all gruff and callused, it’s hot because it’s being confronted with someone who is unabashedly themselves in the world.”

In all of this multifaceted adoration of working-class hands, though, there is a huge, but sadly unsurprising omission: The image of working-class hands in popular culture is predominantly a white one. There are few, if any images of worn-out black or brown hands that are labeled “working class” — in fact, Google images renders none at all. This glaring hole in representation can be attributed to the perception of the “working-class” label writ large. As CNN reports, “‘In general, there is a tendency to not talk about blacks as workers,’ said William Spriggs, chief economist for the AFL-CIO and an economics professor at Howard University. Instead, black and brown workers are considered ‘underclass’ as opposed to working class and ‘lazy’ instead of hardworking.’”

To put this in perspective, “today’s working class is more female and racially diverse — with whites comprising less than 60 percent of the working class,” according to The Guardian. So the fact that the “working-class hands” fetish seems to focus so exclusively on white, male hands is yet another sign of just how skewed this idealized view of the working class remains.

However distorted this perception may be, though, our self-narrated fairy tales of a life of manual labor are sure to persist. It is, after all, romantic to imagine what we may be capable of building with our hands if we weren’t chained to our desks. Because the myth of working-class hands is twofold: First, that a so-called “simple” life even exists; and second, that it’s any more rewarding than your office nine to five.