Is it the vapidness? The narcissism? All the hashtags? Or it something much more familiar (and offline)?

Earlier this month, Josh Ostrovsky, an Instagram celebrity more commonly known as The Fat Jew, mocked the Instagram models affected by the platform’s 10-hour outage. “What if Instagram never gets fixed??” he tweeted scornfully, before later deleting his outburst. “So many models will lose their livelihood, careers instantly destroyed. Instagram model unemployment skyrockets, and girls who post about Fit Tea will be lined up outside of soup kitchens.”

“THIS IS SO SCARY, PRAY FOR THESE WOMEN,” Ostrovsky continued mockingly, rounding off his tirade with the hashtag #instagramdown. Before its deletion, the tweet had elicited several hundred replies from Twitter users; the bulk of which observed that Ostrovsky is a talentless grifter who got rich off the back of other people’s jokes. Still, his tweet was liked and retweeted some 10,000 times, suggesting that, even if the messenger was dismissed as a hack and hypocrite, the message itself struck a chord.

Ostrovsky isn’t alone in his contempt for the Instagram model or “influencer.” Now that the phenomenon of Instagram-based fame and money-making has captured the attention of mainstream audiences, tangible scorn for people who leverage Instagram for social and professional gain is permeating pop culture. And by people, I mean women.

In TV and film, examples abound: Take Hi Haylee, a fictional “content creator” and “social media star” on Funny or Die’s web series Like and Subscribe, who wears a pink dad cap, clutches two iPhones and defends her cultural appropriation on the grounds that she’s “1/32nd Cherokee Indian”; or Annika Atwater, a spoiled Manhattan rich kid and aspiring body-positive influencer on Netflix’s hit TV series You; or Taylor Sloane, a whimsical, L.A.-based Instagram celebrity in the comedy film Ingrid Goes West. All three characters are conventionally beautiful white women; they’re narcissistic, vapid and contemptible (“A butterfly? It’s my spirit animal for the year!”); and in the case of Atwater and Sloane especially, they function as foils for the more intelligent, sardonic female leads.

Or take pop music, where the same unflattering, two-dimensional portrayals of popular women on social media can be found. The Chainsmokers’ “Selfie” might be the most overtly contemptuous example, but the greatest number of references is found in rap, a genre that’s been plugged into Instagram culture longer than most, where a tone of knowing weariness is setting in. Drake and 21 Savage expose Instagram models for fudging their locations (“She at home but her Instagram location the beach”); Kanye West pokes fun at the tenuousness of their employment (“She Instagram famous but can’t keep a job”); Kendrick Lamar and J. Cole, among others, bemoan their Photoshopped, surgically enhanced aesthetic (“I like ’em real, I don’t like plastic booties and lips”); and Future swears off them altogether (“I fuck with shorty ’cause she don’t post”).

So why so much hate for the Instagram model? Where does this creeping tone of contempt come from, and does she deserve it? Well, influencer culture can be deeply corny, and the squeaky-clean good looks, platitudinous language and inane use of hashtags can feel intensely grating (it’s also a passé, decreasingly profitable formula). Plus, some influencers promote socially harmful products to vulnerable demographics — the most well-known example being ads for appetite suppressants that the Kardashian-Jenner sisters and others foist on their audiences of mostly young women and girls — and in light of growing research about the harm social media causes the mental health of young people, the highly curated, retouched images of success that influencers peddle can feel nauseating, even irresponsible.

However, not all of the backlash against Instagram stars is grounded in principled objections to consumer capitalism, as evidenced by the amount of scorn that’s reserved solely for women. After all, male influencers exist, and they also shill shitty products, feign perfect lives and adopt cloyingly upbeat language (#winning #riseandgrind #hatersgonnahate). Yet when TV writers wish to portray an influencer as a contemptuous sellout, the simplest shortcut is to make her female. There’s apparently just something so much more hateable about a beat-faced Huda Kattan than a Gucci-tracksuited Robbie Tripp, and it’s difficult to explain that without recourse to gender. In other words, much of the contempt for the Instagram model is fueled by pure sexism.

On some level, this is obvious. The idea that women are stupid, shallow and vain is vintage sexism and informs much of the backlash against social media culture more generally. It’s hard to imagine the same handwringing about the cultural decline wrought by selfies and dog filters occurring if those weren’t activities primarily enjoyed by young women, for example, and critics like Ostrovsky — who once described his female groupies as “a bunch of fours and fives who have giant lady hands [and] hate their dads” — probably aren’t driven by concern about the body image of 11-year-old Kardashian fans. They’re likely just punching down.

Mocking women who earn a living from social media is easy, because “comics” can rely on two useful audience pre-conceptions: First, that feminized labor isn’t “real work,” and second, that women who leverage their sex appeal for social or economic gain are contemptuous. In other words, jokes about Instagram models land because audiences already believe that the work they do is trivial, easy and unworthy of remuneration — influencer marketing is, it’s probably worth noting, a rare industry in which women outearn men — and that they are, in essence, glorified whores. 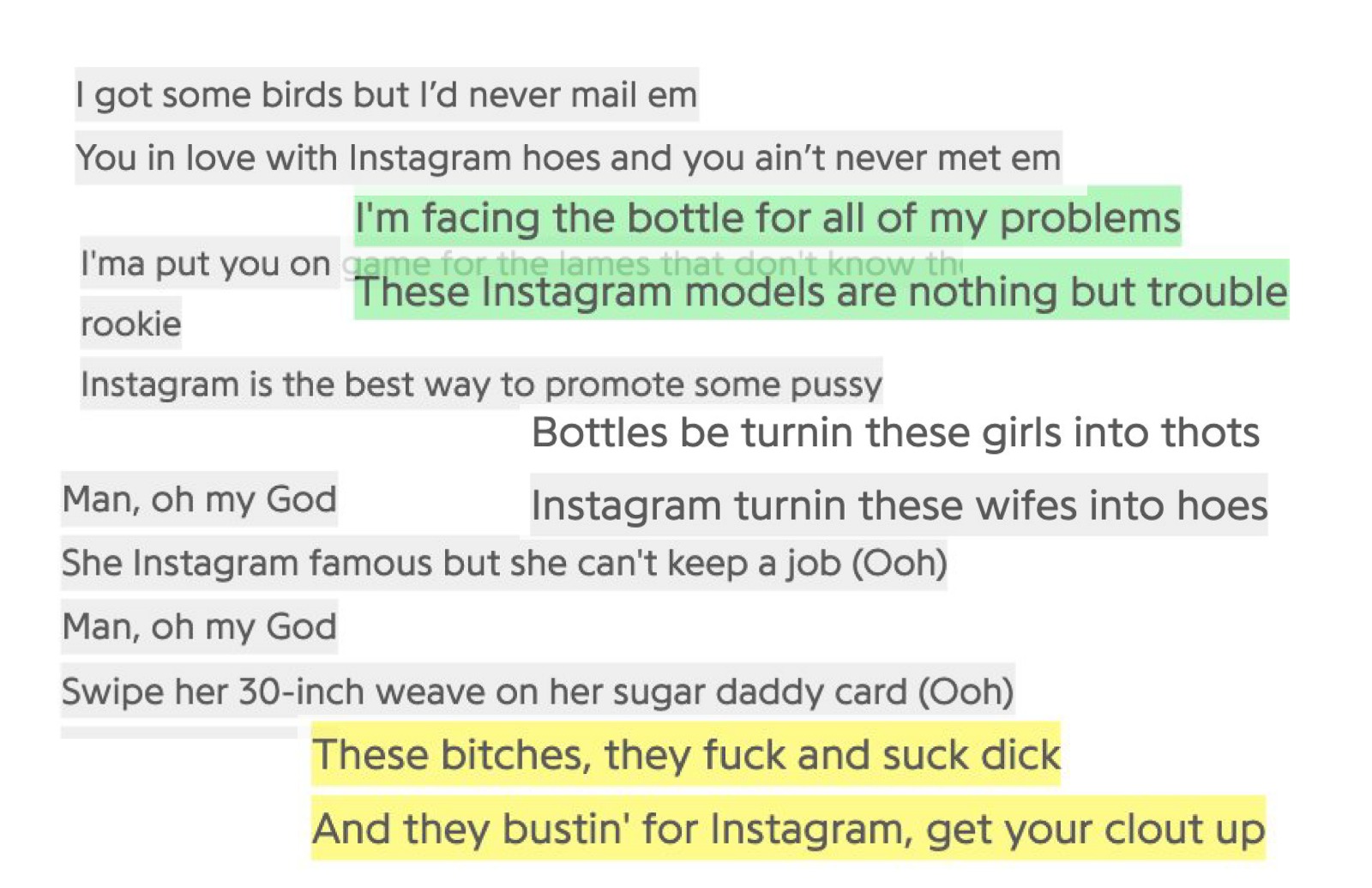 Both in terms of the nature of the labor and the contempt and anxiety it generates, the parallels with sex work are undeniable. “I see escorts on social media as releasing content akin to social media influencers,” Cleo Constantine, a 26-year-old sex worker based in Berlin, tells me. “Our accounts are usually deleted or shadowbanned so we rarely get the followers that influencers get, but we’re releasing nonstop content; being funny, sexy, witty and engaging.”

She explains that, like influencers, sex workers produce comedy, editorial content and original photography and engage in savvy audience growth and marketing; work that very few people dismiss as unserious when men do it. But because part of the “product” is sexiness, beauty or desirability — qualities women are expected to serve up effortlessly, and for free — the labor involved is invisible, so the suggestion it’s worth paying for becomes fodder for comedians like The Fat Jew. “In this social media space, men probably think of our labor as being akin to sorority girls washing cars in Daisy Dukes for a bit of cash,” she adds. “Technically work, but we’re having a blast while we’re doing it, so it’s not ‘real’ work.”

Like the sex worker, the Instagram model breaks a cardinal rule of womanhood: That you should be naturally beautiful and desirable, and that you certainly shouldn’t charge for it. Because men expect feminine allure to be authentic, effortless and for their sole benefit (it isn’t), the revelation that women contour cheekbones into existence, augment their lips and asses, flub their Instagram locations, meticulously workshop their captions for maximum engagement and expect to turn a buck from it all is seen as treacherous.

“Men like this idea of a woman’s look being totally natural, not that you’ve fasted for a week before your photoshoot,” Constantine muses. “You should be unrehearsed and off-the-cuff funny, not have a draft folder full of ‘candid selfies’ or scheduled tweets of witty observations.”

“Men don’t like to think that this seduction we’re carefully laying out is unnatural,” she adds. “They prefer that you’re not self-conscious of the power you have with your words and body.”