Why, Exactly, Is Knowing Half the Battle?

Examining the old G.I. Joe cartoon maxim with the show’s creator, the voice of Shipwreck, an actual veteran and others

It’s how G.I. Joe: A Real American Hero closed out every episode: After the good guys defeated Cobra, a quick little public service announcement would appear with a fairly simple morality message. For example, these random kids break a window playing baseball, and they consider lying to their mom about it. Suddenly, some Army dude rolls up in a combat jeep like some shit’s about to go down, and he tells the kids why lying is bad.

That Army dude, of course, is Flint, and the kids know who he is, so it’s all good. After Flint’s little speech, the kids decide to fess up to their mom, setting Flint up by saying, “Now we know,” to which Flint replies, “And knowing is half the battle.”

“And knowing is half the battle” is how all of these PSAs concluded and today, 30-some-odd years after the cartoon went off the air, the catchphrase has an extended life in the form of various memes. 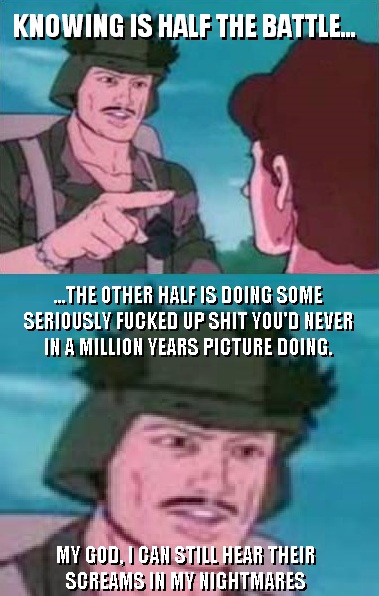 But while most memes and online jokes tend to die out in a month, “knowing is half the battle” never seems to fade away. So, in celebration of this motto’s enduring glory, I reached out to a number of experts on the subject, including people involved in the cartoon, G.I. Joe fans, a life coach, an internet historian, an expert on PSAs and, for good measure, someone who actually served in the military.

Hopefully they’ll provide you with something you didn’t know before because, well, you know…

Donnie Keene, G.I. Joe fan: I enjoyed those PSAs after the cartoon. Being a young kid when I watched them, seeing your favorite cartoon characters doing the right thing was important. It was meaningful to me, and they played a role in who I am today.

One memory I have related to that catchphrase was when I had a neighbor that lived across the street and their son was a year or two younger than me. He had a muscular disease, and others in the neighborhood wouldn’t play with him. After watching one of the G.I. Joe episodes and seeing one of those PSAs, I went across the street and asked his mom if it was okay if Nathan and I played together. She smiled and said sure, so we played guns outside, going around his house, having fun.

Over the next few years we would hang out together at his house, playing guns and Nintendo in his room. He passed away from pneumonia at the age of 11. I’m thankful that I was able to hopefully bring him some normalcy and happiness while he was here, and that’s all because of G.I. Joe and doing the right thing.

Ron Friedman, series creator of G.I. Joe: A Real American Hero and author of I Killed Optimus Prime: Confessions of a Hollywood Screenwriter: Ignorance has claimed more lives than the Black Plague, the Spanish Flu and coronavirus combined, and will continue to do so. The remedy for ignorance is knowledge, which is always hard-earned, and when used with generosity and an open mind, is always the first half of the solution. If you can define the problem, you can work it out. That’s why I included that phrase in the cartoon, which I made up based on my years as a working architect and part-time civil engineer.

Col. Jim Hawkins, retired, Army, served 34 years (and a Kentucky Colonel too!): That phrase — “knowing is half the battle” — comes from that old military maxim: “The first blow is half the battle.” In practical military terms, understanding your opposition improves your chances of success. For example, in Iraq, when we would conduct convoy operations, it was pretty easy to look at a map and say, “I’m going to go from Baghdad to Fallujah,” but that’s not enough. You’d have to go to the intelligence section and get the latest briefings on enemy activity along the route, and you’d make sure you had your route mapped out and had knowledge of the terrain along the way. There would also be a whole analysis of what the potential threats would be. By knowing what might be out there, and then knowing what to do if you run into that, all that increases your odds of success if you did run into trouble.

Also, knowing things like the ranges of the enemy’s weapons system versus your weapons system, you can then set up a battle where your tanks are at a range where you can kill them but they can’t kill you. That kind of knowledge improves your chances of success, so I’d say that’s pretty good advice from Joe. Even if the public service announcements were a little cheesy, they did provide a pretty important life lesson.

Don Caldwell, internet historian and editor-in chief of Know Your Meme: In terms of the significance of the “And knowing is half the battle” PSAs online, I’d say the most important thing is a series of parody videos created by filmmaker Eric Fensler back in 2003. Fensler took the original PSAs from the 1980s cartoon and dubbed nonsensical dialogue over them, which subsequently went viral after being spread on sites like eBaum’s World, Heavy and Fensler’s personal website. Fensler later got hit with a cease and desist from Hasbro over the parodies.

These videos are notable for a number of reasons. They were viral videos that managed to explode across the internet before YouTube even existed, mainly living as embedded QuickTimes on various sites. It’s also interesting how iconic they became, with references to them appearing in the Adult Swim show Venture Bros, the music video for “Pork and Beans” by Weezer and the video game Duke Nukem Forever.

“Knowing,” however, might not be even close to “half the battle,” depending on the context. Cognitive scientists Laurie Santos and Tamar Gendler coined the “G.I. Joe Fallacy” to address evidence that simply being aware of cognitive biases does little to help overcome them.

Elisabeth Bigsby, professor of communications at University of Illinois, author of the journal article “Efficiently and Effectively Evaluating Public Service Announcements”: In general, simple and consistent messages are more effective than complex or diverse messages. For example, these G.I. Joe PSAs cover several different topics, such as telling the truth, stranger danger and teamwork. Although they may all fall under the umbrella of morality and safety, the messages would be more effective if they stuck to one message (for example, not lying), at least for a period of time (e.g., a season or several episode arc).

Kids especially benefit from frequent, consistent messaging. The most consistent part of the PSAs are the tagline “and knowing is half the battle,” which I bet people who watched the show as kids still remember today. However, they probably don’t remember the specific lessons from each PSA. An effective tagline but probably not effective at teaching lessons long term.

“Knowing is half the battle,” though, is a pretty accurate description of the knowledge-to-behavior link. In my area of research — health communication — we think about different stages or phases for communicating information. First, people need knowledge (e.g., smoking cigarettes has negative health consequences). But having knowledge isn’t enough to drive behavior, people also need to be confident in their abilities to avoid a behavior (e.g., quitting smoking). They also need to have the skills to enact the recommended behavior (e.g., knowing where and how to get smoking cessation help). Knowledge, though, does start the process of learning a new behavior or changing a behavior.

Lindsay Jackson, certified life coach at Eleven 11 Coaching and host of Necessi-Tea Podcast: As a coach, I’d say that “knowing is half the battle” is about knowing what you’ve already been through and knowing what you’re capable of. Even if you’re experiencing doubt, “knowing is half the battle” is about recognizing what you’ve already overcome in your life. From there, you can go forward with what you know to be true — that you can rise to the challenge you’re facing.

Neil Ross, actor, voice of Shipwreck and author of Vocal Recall: A Life in Radio and Voiceovers: While I have many memories of working on G.I. Joe, none of them are specifically about the PSAs. I know I did a few because people reference them and a couple are on YouTube, but they would have been recorded quickly either just before or just after a recording session for the show. I did mention the PSAs in my autobiography though, as I know they — and G.I. Joe in general — had an impact on many fans.

Here’s what I wrote exactly: “Many times, at personal appearances, I and my fellow cast members will be approached by a fan wanting to thank us. While the stories differ in some of the particulars they are all quite similar. The fan will speak of being raised in a less than desirable home situation, of being bullied and ostracized in school. They tell us that all they had was G.I. Joe or Transformers to teach them values, and they feel as though we in some way helped salvage their lives.

“They reference the positive values the public service announcements in G.I. Joe taught them. They tell us that they went out into the world determined to live their lives with the courage and integrity of Duke or even Shipwreck (Lord help them). They speak of lives well led as a result, of successful careers in the military or civilian life. They tell us of families they’ve created, and children they’ve raised well. Sometimes those kids are in tow and, thanks to mom or dad’s old DVDs or videos, they’re fans of the shows too. I’m not ashamed to say some of these folks and the stories they tell, have brought me close to tears.”

As to “knowing is half the battle,” what that means to me is the value of preparation. A lot of people tend to go through life by just winging it. Sometimes that works, but in my opinion, ultimately it leads to failure. You prepare by acquiring as much knowledge and as many skills as possible that pertain to your chosen path in life. That’s “half the battle.” The rest of the battle is following that chosen path.