Why Do We Think Muslims Don’t Wipe Their Asses?

From getting it, to eating it, to having it, welcome to Ass Week, MEL’s weeklong exploration of the body part du jour.

Growing up as a Muslim after 9/11, you’re likely to be subjected to a ton of abuse and insults, especially online. And as a Muslim who has written extensively about Muslim issues, I’ve experienced more than my fair share. I’ve been called a terrorist and had Alt-Right Twitter suggest I’ve had sex with a goat and/or my relatives. Even when I write articles completely unrelated to Muslim issues — namely, the vast majority of the writing I do for this publication — I often still receive a barrage of anti-Muslim comments and emails.

I’m able to brush off most of these comments without a fuss, although often with a gentle request to “eat my boi pussy.” But there’s one type of anti-Muslim trolling that always stops me in my tracks — not because it’s particularly hurtful or cruel, but because its stupidity and absurdity shines a light on the real nature of the West’s new war on Islam. In Medieval times, Christendom went to war with Islam with swords, shields and arrows, and its wins were measured in dead bodies and captured fiefdoms. In 2019, the same war is taking place, but not on a battlefield. It’s a cultural war. And it’s largely focused on the cleanliness of your asshole.

I mean that in the most literal sense possible. Ask any Muslim, and they’re likely to tell you that they’ve been accused of “not wiping their butts properly” at least once. What they’re really saying, of course, is that we’re “dirty” and “uncivilized,” especially compared to the “enlightened” West, with its Victorian-era irrigation systems and use of dry, coarse toilet paper. A quick search on Twitter yields hundreds of tweets from Trump-supporting anonymous accounts accusing Muslims of “wiping their ass with their hands,” “wiping their butts in public” and generally being unhygienic in the ways of shitting.

When I was taught how to use the lota — which in my house was a standard watering can with the tip of the nozzle cut off — it was done using a mixture of both Western and Islamic cleaning methods. Basically, I’d wipe my ass with toilet paper, and the lota would be used afterward to remove any excess shit in my butt’s hard-to-reach regions. All-in-all, it’s a pretty clean, safe method for ensuring that rogue bits of poop don’t rest on the inner surface of my butt cheeks, or worse, get enmeshed in my pubic hair.

Using a lota is a rite of passage for Muslims, and our potty training can involve spending hours working out how to hold a watering can with our right hand — at such an angle where our left can adequately clean — without spilling water all over the toilet seat and bathroom floor. Even ex-Muslims, such as the Canadian internet personality Abdullah Sameer, says that it was one of the few things he “kept from Islam” after he renounced his faith:

Despite all of that cleanliness, though, “kids in school always said I smelled of shit,” says my friend Umar Ali Khan. Like me, he attended a school that largely consisted of middle-class white people, a plight he felt most acutely in the bathroom. “Most of my mates would use the urinals to pee,” the 28-year-old says. “As a Muslim, I was taught to go to the toilet sitting down. So every time I went to the bathroom, they assumed I was taking a shit.”

Another friend, Adam, 25, tells me that he spent a couple of years in high school being goofed on for “drinking toilet water.” This was because his classmates noticed that whenever he used the bathroom, he carried a water bottle with him. “I didn’t want to explain what it was for,” Adam tells me. “I knew that they wouldn’t listen, and that if I explained it to them, I’d end up being made fun of even more. So I just ignored it.”

Using a lota isn’t just about efficient cleaning, though; it’s an intrinsic part of the Islamic faith. Muslims pray at least five times a day, and the wuduu — a cleansing ritual — is demanded before each prayer. This includes ensuring that no remnants of human discharge (e.g., piss or shit) are present on the body before prayer. It’s so important that even a small amount of it can void your prayers (and the prayers of those around you). In other words, the salvation of your fellow Muslim brothers is dependent on how clean your ass is.

“Islam teaches that the condition of the body affects the condition of the spirit, so it’s essential to be clean at all times — especially before offering prayers,” writes Javaria Akbar in VICE. “Unlike you may have been lead to believe, Muslims don’t just throw their hands between their cheeks and have a good root around after we’ve been to the toilet. Using a lota is like a mini-douche, and to be honest, a quick swipe of scrunched-up toilet paper seems a lot seedier than a lovely, water-based ablution (which feels pretty good).”

Re: that “quick swipe of scrunched-up toilet paper”: As we’ve written before, toilet paper is pretty useless at keeping your butt clean, usually resulting in skidmarks, and possibly, infections if the sensitive skin around the butthole gets damaged by it. Yet, in the Western world — and particularly the U.S. — toilet paper is king. The average American will go through 50 pounds of it each year, around 30 rolls per person. According to Statista, which collects polling data, the U.S. leads the world in the amount of toilet paper it uses, far outpacing countries in Southeast Asia, Latin America and European nations that border the Iberian Peninsula: 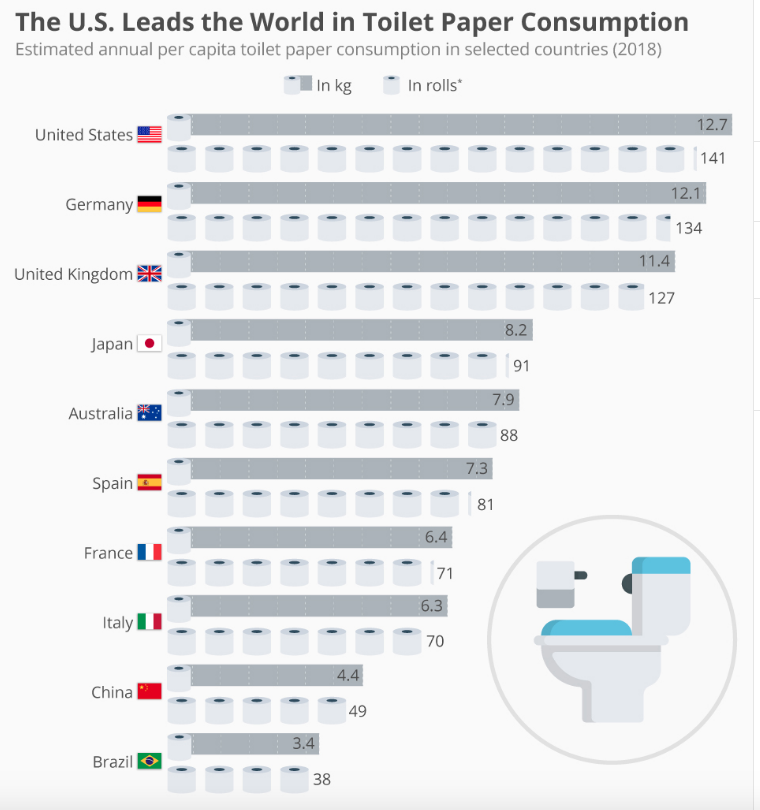 It might be surprising to learn then that mass use of toilet paper is a fairly recent innovation, credited to American inventor John Gayetty in 1857. Before that, Europeans and North Americans used other objects to wipe their ass, ranging from stray rocks, discarded leaves, corncobs and old newspapers and catalogues. Not that Gayetty’s prototype was much better. It was initially made of hard Manila hemp that was known to leave splinters. Yet even today — after multiple generations of toilet paper innovation — we find ourselves battling an epidemic of “polished anus syndrome.” (The cause of this epidemic, per our brown wave of shit coverage last year: “We take dry, rough toilet paper and smear poop around our skin rather than wicking it off with clean water. And then when we can’t get clean, we wipe and wipe until we make our butts bleed.”

For some reason, though, Americans and Western Europeans still associate toilet paper with cleanliness. According to The Atlantic, this reluctance to use water to take care of their post-shit detritus dates back to the 18th century. “The presence of a bidet is regarded as almost a symbol of sin in the United States and Britain, when various forms of douching were thought of as a pregnancy preventive, and bidets were considered a form of birth control.” Almost nearly as bad — sex workers liked them. “GIs visiting bordellos [during World War II] would often see bidets in the bathrooms, so they began to associate these basins with sex work. Given America’s puritanical past, it makes sense that, once back home, servicemen would feel squeamish presenting these fixtures to their homeland.”

The times, however, may be changing. According to USA Today, more Americans are buying toilets with built-in bidets, and there are even apps that allow users to search for publicly available toilets that come with one. Not to mention, a growing number of people are carrying “bottle bidets” with them to work.

All of which brings me back to the Iota. “The bidet is just the lota as a luxury product,” Khan says. “But in my view, it’s not the same thing at all.” To him, the trend of built-in bidets in Western households has more to do with status than spiritual yearning. “It’s more of an added feature when you’re re-doing your bathroom, and you’re adding extras like heated flooring or [digital] controls to your shower. If you can afford it, you add it in,” he explains, citing Kris Jenner’s bidet-equipped “high-tech bathroom” as an example.

For his part, Khan still uses a watering can with the nozzle cut off when he goes to the bathroom, and he keeps a bottle of Evian, with a squeeze cap, in his office desk drawer. After all, washing himself is still, first and foremost, an act of prayer. “When Muslims wash, yes, the principle is the same, but we’re also doing it as an act of prayer,” he tells me. “There’s something powerful to that. Whether you’re rich or poor — whatever ethnicity you are — you still use something as humble as a lota to clean yourself. Isn’t that what Islam is about — the idea that everyone, ultimately is equal?”