Why Do Straight Guys Send Each Other Pictures of Their Poop?

‘There’s a weird sense of pride, like some kind of showboating to your other male friends in how big of a poop you can push out’

The first time Jack Berner snapped a picture of his own poop, he peered down into the bowl and saw that the log curled into a perfect “J” shape, just like the first letter of his name. Using the image-editing technology on his iPhone, the 27-year-old freelance film producer added the remaining “ack” in black against the toilet’s white porcelain and texted the picture to his best friend, Alex (a pseudonym). Alex and Jack have known each other since 1996 and have been good friends since 2003. In their friendship, he says, “nothing is too taboo or across-the-line.” 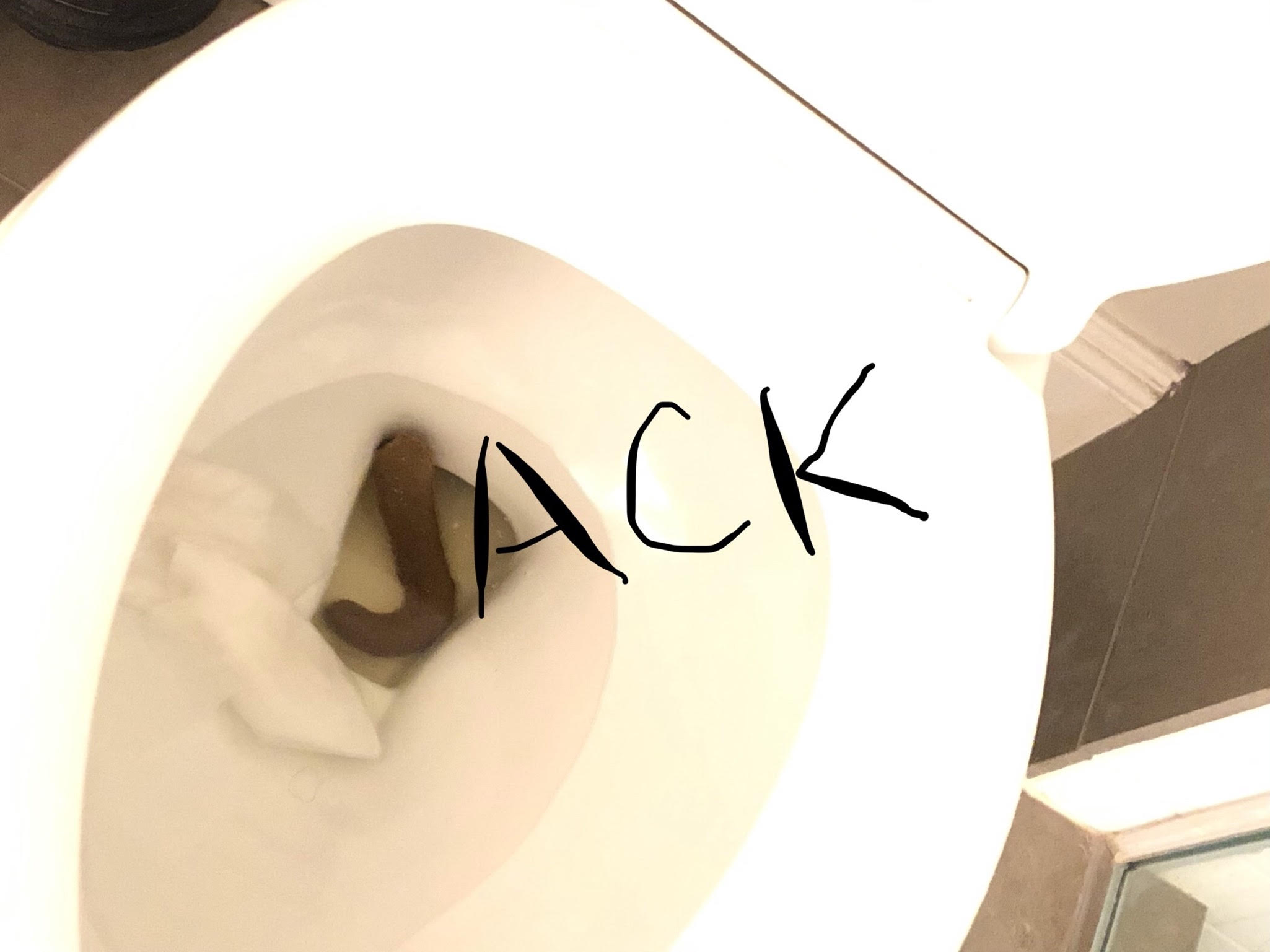 “He loved it,” Berner says. “He thought it was great.”

This wasn’t Alex’s first time at the poop rodeo, either. Alex and a former roommate sent pictures of their shit to one another several times. In fact, the more straight men you ask, the more you’ll find it’s common for them to feel the urge to share their waste with their closest friends. A quick Facebook ask produced dozens of straight men who have swapped snapshots of their stool with each other for, well, shits and giggles. “I weirdly know a lot of straight boys who have done this,” one of my friends wrote. “I have two friends in college who did this,” wrote another. One friend even said that their dad used to send them pictures of his own poops.

Berner says he photographed his poop because it was an “ideal, nice length” and a “healthy looking color.”

Most other respondents agree that a long, girth-y poop separates a flash from a flush. Other non-stool factors might warrant a photo: If it plops directly into the bowl’s center or forms into a curious shape — both characteristics of Berner’s J-shaped winner — then it’s even more picturesque.

But if you have the perfect specimen, with whom do you share it? As friends since elementary school, Berner and Alex’s relationship includes dark periods that have forged deep bonds. “I have plenty of friends who would get a kick out of it, but it wouldn’t make as much sense to send it to them,” Berner explains. “[Alex] knows the real me.”

Several people concur that a pre-existing close friendship is paramount when deciding who receives a poop pic. Send it to the wrong person, and you risk losing a social tie. According to Jeff (another pseudonym), a straight man with a penchant for poop pics but wishes to remain anonymous, it’s imperative that you only send this kind of photo to people with whom you share a tight bond. Gossip may follow. Next thing you know, your reputation is on the outs because of a turd. “If you send it to someone who doesn’t want to receive it or who doesn’t share a relationship where it’s appropriate, that could fray ties and harm your reputation with that person,” Jeff explains. “It’s reserved for people with whom you have bond.”

A straight man who wants to share his poop with the world can use many avenues available to him. He might send texts to one person at a time, like Berner. One gay friend shares with me that a straight hometown acquaintance of his was so proud of his stool that he put pictures of it on Facebook. Tomas de las Casas, who attended an all-boys Catholic school in Miami, says that pictures of poop were often shared, impromptu, in the friends’ group chat. One friend in particular would send poop pics to six people in the group. Casas says that of the six people in the chat, the picture elicited one-third disgust, one-third amazement and one-third dumb gay jokes about fitting a dick up their ass.

Though Casas now identifies as queer, they say that at the time they identified as straight and their friends treated them as any other straight guy; Casas doubts they would have shared poop pics with someone who is queer. “Straight guys in high school, they don’t know how to express intimacy, they’re very bad at it,” they say. Casas likens it to comparing dick sizes, a time-honored tradition among high schoolers. “I think that masculinity has something to do with it.”

Casas says that the sharing didn’t stop at pictures. A friend once called the entire friend group into the bathroom to gawk at a poop still fresh in the bowl. “There’s a weird sense of pride, like some kind of showboating to your other male friends in how big of a poop you can push out,” Casas says. “That seems intimate to me. Like, I don’t feel any way that it can’t be. It’s coming out of your body.”

The film Call Me By Your Name uses a cum-filled peach as the epitome of intimacy. Elio (Timothée Chalamet) unloads into the fruit’s center, which causes him mental distress, and Oliver (Armie Hammer) teases him with the reality that he might eat it. In the book, he does. But the book also features a far more intimate scene that, yes, features poop. During the twosome’s trip to Rome, Oliver’s final excursion before heading back to America, Elio sees Oliver taking a poop and asks him not to flush it. Instead, Elio poops on top of Oliver’s poop as Oliver kisses him and massages his stomach to urge the stool out of his body.

While most people consider Call Me By Your Name a queer love story — young Elio is at least questioning his sexuality, while Oliver is pretty mum on the subject — what is known is that the author, Aciman, is straight. And to Aciman, the most intimate thing you can do with a partner is show each other your poop and even combine your poops together in one bowl. “Our bodies won’t have secrets now,” Elio tells Oliver.

Perhaps two queer men sharing their poop with each other is a straight man’s idea of intimacy. Poop is what you might call “abject,” a philosophical and psychological phenomenon coined by Julia Kristeva, who defined it as “the state of being cast off.” Poop, along with urine, breastmilk and other bodily fluids are secreted from the body, and therefore, untouchable and unwelcome. Psychologically, Kristeva argues, we “permanently thrust aside” these fluids in order to live.

This is especially true of bodily functions commonly associated with women — namely, menstruation — which are cast off or “abjected” by patriarchy. As such, a lot of female artists deal with the abject in their work — Cindy Sherman, Louise Bourgeois and Kiki Smith to name a few.

Anthropologist Sherry Ortner went a step further when she theorized in 1972 that women’s relationship to the body was what created the idea of gendered separate spheres — i.e., men go out and do the work and women stay at home. In particular, she argued that the near-universal second-class status of women stemmed from menstruation, lactation and other bodily functions she considered uniquely female. (Ortner was very much a binary thinker whose analysis excluded trans people.) Ortner then went another step beyond that: Because many women produce babies and become mothers, they’re also seen as closer to human bodily functions more generally. Men go out and hunt; women stay at home and clean up baby’s vomit, urine and poop. Men were in charge of matters of the brain. They think, therefore they are. Women, in turn, stayed home and dealt with feces.

So if men are in some way finally accepting their own poop, are they transgressing their gender roles? Should we laud that straight, cisgender men have finally dealt with their shit? Or is poop just funny? “It’s inherently funny in the same way that cracking a fart unexpectedly is funny,” Berner says. “It just subverts all social norms, and it’s the best kind of humor. Maybe not the best, but it’s one of the greats.”

Beyond humor, several men share that they did use poop as a way to express a sort of intimate closeness with other men. Doug Zambon used poop as a way to stay close with his former roommate when they were separated over summer vacation. “It’s in a sense intimate, but only in that you’d only do it with people you’re really close to,” Zambon explains. “It’s not something you’d send to someone you don’t know that well. For me it was between roommates. It was kind of a silly way to stay connected.”

The first poop picture Charles Solidum received was an important milestone. Solidum, a trans man, took it as a sign that he really had become one of the boys. He received a picture from a friend he’d known since childhood, one he described as having a “naturally nurturing and supportive masculinity” and “one of my less problematic straight white male friends.” “I remember it because it was like, ‘Yes! I made it! This is the real deal now!’” he says. “Not like I was looking for indicators for being in the boys club, but it was striking to me it would happen this way.”

Though we think of straight white men, especially young straight white men, as a competitive breed, there’s almost no competitive aspect to poop sharing. Each man says that sharing your poop is a matter of personal pride and accomplishment, not a matter of gloating or conflict. It’s a celebration of a cumulation of bodily processes. And it’s offering up the literal worst parts of yourself — the waste — to another person. It’s perhaps the ultimate act of vulnerability.

“It’s as intimate as sex,” Berner says. “It’s something that’s inside of you that’s deeply personal, you know. And you don’t share it with just anybody. I really can’t think of anything that it compares to more closely than like revealing your genitals to somebody or being inside of somebody.”