What Determines the Street Value of a Drug?

Americans spend a lot of cash on illegal drugs: $150 billion on cocaine, heroin, marijuana and methamphetamine in 2016 alone. And while anyone who does drugs knows precisely how much they cost, what determines that price?

“The short answer is supply and demand,” says drug policy researcher Jonathan Paul Caulkins. “It’s a market. Occasionally, law enforcement interrupts it so that it’s in disequilibrium, but usually the market ‘clears’ in the sense that the given market price induces suppliers to provide the same amount that users want to buy at that price.”

“The price has to be high enough to justify suppliers’ costs,” Caulkins continues. “It’s a competitive market, not a monopoly. But the costs include not only standard financial costs — e.g., for the drugs themselves and much smaller things, like packaging, adulterants, guns, etc. — but much of the money ‘pays’ dealers’ compensation for the risks they incur — of arrest, suffering violence, etc. — and their time.”

If you know much about the War on Drugs, you might not be surprised to find out that those risks are what really cause the prices of drugs to shoot up, so to speak. For example, according to a study performed by Caulkins in the late 1990s, “compensation for risk of prison” and “compensation for physical risk” make up more than 50 percent of the cost of cocaine, whereas the cost of production in Colombia makes up only one percent. Below, you can see that breakdown. 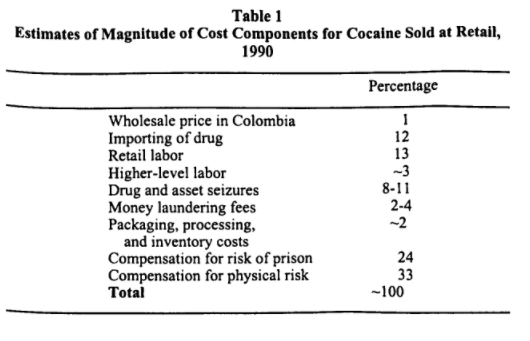 In other words, most of what we pay for when we buy illegal drugs is the fact that our dealers, who can make thousands of dollars per week, could end up harmed, dead or in prison, and therefore, they want to be appropriately compensated for taking that risk. Legality and violence aside, many drugs are incredibly cheap to produce. For instance, the coca leaf required to produce one kilogram of cocaine base costs somewhere between $585 and $780 in Colombia. Meanwhile, a kilogram of cocaine made from that coca leaf can fetch between $24,000 and $27,000 on the street in the U.S., and in excess of $200,000 in Australia, where border protection — and the risk of getting caught — are intensified.

That essentially means that legalization would make all of these drugs much cheaper and safer for everyone involved. “The key observation is that prohibited drugs are very, very expensive relative to what they would be if they were legal,” Caulkins says. “Illegality forces the production and distribution to be done in very inefficient (expensive) ways.” We saw this when weed was legalized: The cost per gram decreased by 67 percent in only three years of legalization.

The same thing can be said for many — but not all — prescription drugs that are resold on the street. A 2011 CNN article says a tablet of oxycontin can go for $50 to $80 on the street, versus $6 when sold legally. But then we have drugs like insulin, which are being sold on the street for less than 10 percent of their retail price. This is basically because insulin manufacturers have a monopoly and have taken it upon themselves to be greedy assholes, which kind of throws a whole wrench in the “normal” economics of drug sales.

All of this is to say, treat your dealers well, decriminalize everything and fuck Big Pharma.