Who the Fuck Was the Red Baron Anyway, and Why Is He on My Frozen Pizza Box?

As an exhausted parent, I often find myself shopping in the frozen-food aisle, and when I’m there, I always see the same cast of reassuring faces. There’s the emerald masculinity of the Jolly Green Giant; that adorable little nudist that is the Pillsbury Doughboy; and the perfectly-bearded Gorton’s Fisherman. But there’s one mascot who stands out among the rest — one that makes me wonder what the hell he’s doing there — and that’s the Red Baron.

While, admittedly, most of my knowledge of the Red Baron comes from Peanuts comics, what I do know is that he was a German fighting ace during World War I who killed lots of Allied troops (Americans included). That said, how the hell did this guy end up as a frozen food mascot? It’s like having Mussolini as the mascot for your breakfast cereal.

To figure this out, I decided to go right to the source — the Red Baron’s website — and call their customer service number. I left a message with the media department and hoped for the best, but unfortunately, while everyone was super nice, they declined to be interviewed for this piece. No matter: If I can expose the Domino’s Pizza Tracker as the complete fraud that it is, I can definitely get to the bottom of another pizza mystery.

The information available online about Red Baron pizza offers little in the way of finding out how they chose their mascot — the closest I could get was from a 2015 article by the Wall Street Journal about Manfred Von Richthofen, the pilot better known as the Red Baron. Here’s an excerpt from that article (I cut out all the boring, not-pizza-related stuff):

“Americans nationwide can buy Red Baron frozen pizza, named in 1976 because the Red Baron ‘was well-known in the United States as an ace WWI fighter pilot,’ says Chuck Blomberg, spokesman for producer Schwan Food Co. … Red Baron Pizza stresses Von Richthofen’s attention to detail as an aviator personifying ‘strength and romance,’ says Mr. Blomberg. The aviator on each Red Baron Pizza box resembles mustachioed actor Tom Selleck more than clean-shaven Von Richthofen, though Mr. Blomberg said he is neither: ‘Any similarities in appearance between our baron and an actual person would be coincidental.’”

But none of that really says why they chose the Red Baron — all it says is that they’re not trying to associate their pizza with a vicious killer, which I totally understand. Everything else I found online about Red Baron pizza more or less said the same stuff: “It started in 1976,” “The guy looks like Tom Selleck” and “Look, now we have a meat-lover’s pizza!” Part of me thinks they don’t even know why they named their pizza the Red Baron. After all, it was named 43 years ago and the founder and longtime CEO of Schwan’s died in 1993, so it’s possible that the secret died with him.

Looking into the actual Red Baron didn’t offer much insight either. I spoke to Wayne Vansant, an author and illustrator behind historical graphic novels, including one about the Red Baron, who explained that Von Richthofen was the top “Flying Ace” in World War I, with 80 confirmed kills — far more than any other pilot during the war. While not quite a baron, he was a nobleman, which was pretty close. He also painted his plane red, as many pilots did this kind of thing back then. While “Red Baron” would become the most famous of his nicknames, he was also referred to by other names like “the Red Battle Flier” and “the Red Knight.”

During the war, as stories spread about the Red Baron and his unparalleled kill count, he quickly became famous, to the point where he wrote an autobiography. His infamy was made all the more impressive by the fact that his career was short-lived, as he was shot down in 1918 and killed (to this day, no one’s quite sure who shot him).

While this may seem unusual in a modern context, when Von Richthofen was shot down over France, he was buried and honored as a formidable foe by allied forces. As Vansant explains, “World War I was the first war that we had airplanes, and there was a certain dignity to being an airman. They were called the ‘knights of the air,’ and a lot of times the infantrymen would be a little pissed off about that, as they were fighting this dirty, nasty, bleeding war on the ground and those guys up there were like the knights of olde. It was like a joust or a duel or something very much like that.”

Being something of an American history nut myself, I remembered hearing stories of soldiers on opposing sides during the Civil War who would break for lunch, dine together, then go right back to killing each other. During World War I, some 50 years later, some of that mentality still existed, as Vansant explains that in the first year of the war, Scottish troops and German troops took a break for Christmas and celebrated together before resuming the brutality the next day. (In Britain, this story is so cherished that it’s been recreated on film numerous times, and even, bizarrely, turned into a Christmas commercial for a large grocery store chain.)

So again, while the Red Baron was indeed the enemy, he was also respected and honored. That’s why he wasn’t terribly controversial, and why it was okay for him to end up in a children’s comic strip nearly 50 years after his death. Honestly, Charles Schulz, the creator of Peanuts, would actually have a lot more to do with the re-popularizing of the Red Baron than anyone else, since many people — myself included — mostly know the Red Baron as Snoopy’s rival in his long-standing series of shorts where Snoopy is a pilot atop his doghouse.

Benjamin L. Clark, curator of the Schulz Museum in Santa Rosa, California, explains to me that the first Red Baron Peanuts strip premiered on October 10, 1965. 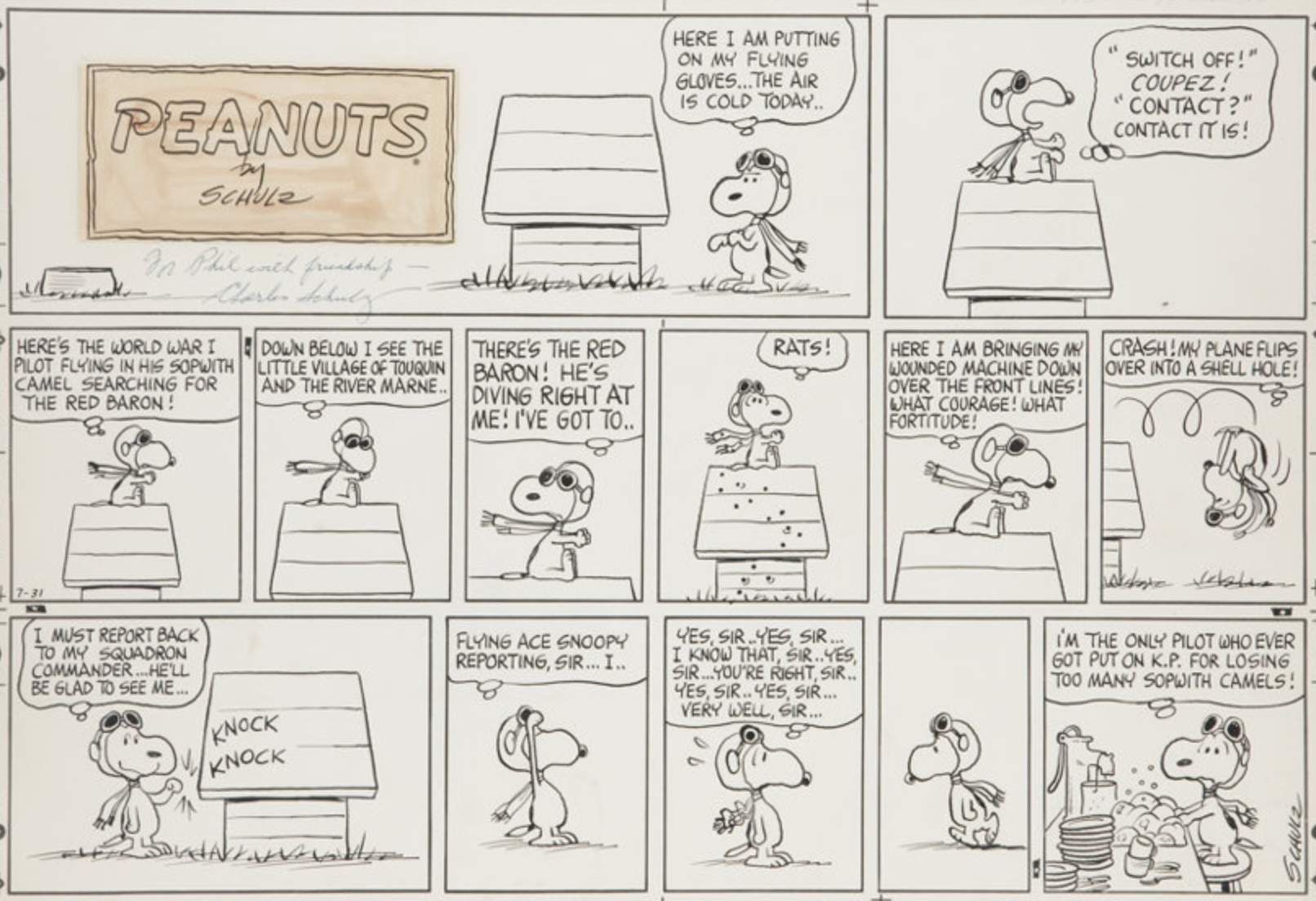 As for why Schulz, a veteran of World War II, would have an interest in one of the most prominent figures of the first world war, Clark provides me with a quote from the Peanuts creator himself, from the Schulz Museum archives:

“My son, Monte, was very interested in making World War I model airplanes. And one day I was just sitting at my drawing board… and he came in with his latest model plane. While we were talking about World War I planes, I just drew a little helmet on Snoopy and suddenly got the idea for it, and put him on top of the doghouse. I asked Monte to get one of his books about World War I planes he’d been reading. I thumbed through the book until we found the name — Sopwith Camel. That seemed to be the best. And that’s how it all started.”

The Sopwith Camel was a type of British fighter plane in World War I, and since Schulz decided that Snoopy would be a flying ace, it made sense to pit him against the most famous pilot in the war on either side.

Needless to say, the flying Snoopy strips were a tremendous success, becoming an ongoing gag for the rest of the run of Peanuts. Following its first appearance, suddenly you could find the Red Baron everywhere: I put the name “Red Baron” into Google’s Ngram Viewer, which tracks how often words or phrases pop up in literature throughout the last 200 years, and well:

As you can see, after World War I, the mentions of his name plummet but for blips here and there. He goes completely unmentioned from 1954 until 1965, then, in 1966 — a mere two months after that first strip — suddenly he’s relevant again. While Clark points out that this was also around the 50th anniversary of the war, it’s pretty clear that Snoopy had a major impact on the Red Baron’s legacy, despite the fact that the Red Baron was never even seen in the strip — he was only mentioned.

Snoopy’s adventures with the Red Baron would find their way onto all kinds of merchandise, including this music box, which Clark is pretty sure is the only time you get a clear shot of the villain’s face: 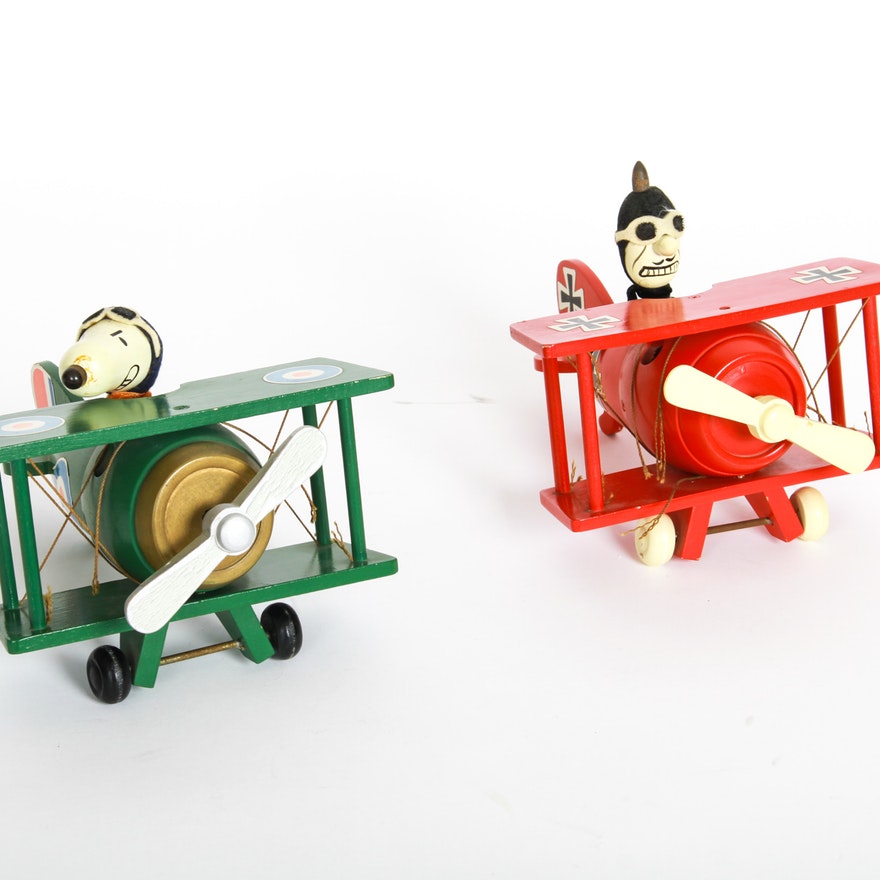 As you can see — due to the appearance of a mustache — he once again has more in common with Selleck than Von Richthofen. The strip also inspired a novelty record that came out just a year later in November 1966. The song was Snoopy vs. the Red Baron by the Royal Guardsmen, and it was so popular it reached number two on the charts here in the U.S., number six in the U.K. and number one in Australia.

In 1983, there would also be a video game for the Atari, which looks nothing short of amazing (seriously, I watched all nine minutes of this… am I okay?).

Outside of the Peanutsverse, Red Baron mania spread to other parts of popular culture, too. It would serve as a nickname for Cy Young winner Rick Sutcliffe, the title of more songs, a bunch of video games and even an anime series, Super Robot Red Baron. There was also a well-loved Hot Wheels car named the Red Baron which was released in 1970. (If you’re a fan of the death-obsessed Toy Story movies, this car can be spotted in the first film, during Buzz’s famous “falling with style” scene, as that’s the car he uses to skate on the race track with.)

So with all that, plus a Roger Corman war film, it seems not unreasonable to name a frozen pizza after the late (and arguably great) Manfred Von Richthofen simply because he was a cultural icon — even if that long dead, cold-blooded murderer had absolutely nothing to do with pizza.

Now if you’ll excuse me, I’m off to have some Red Baron frozen Hawaiian pizza. Time to fly!