Ranking Types of Tea by How Healthy They Are

Green? Chamomile? Lipton? Which will best help me achieve inner peace and tranquili-tea?

Tea is commonly perceived as the healthier, more temperate alternative to coffee — the ideal beverage for someone seeking the gentle caress of warmed caffeine without the jitters that accompany a quadruple espresso. There are so many different kinds of tea, though, and deciding which one will provide the optimal influence on your body can be a journey in and of itself.

Which teas are best for you? For some assistance, as I stand here scratching my head in front of the tea cabinet, I asked Lisa Richardson, director of the World Tea Academy and author of Modern Tea: A Fresh Look at an Ancient Beverage, to help me rank all kinds of tea by how healthy they are — from invigorating elixir to sugar water.

Before plunging into our ranking, I should emphasize that every tea professional I spoke with for this article explained that ranking types of tea is a fruitless endeavor for several reasons. “It will be quite challenging to differentiate health just by types, as there will be SO much variety within the types,” tea sommelier Tess Thormodsgaard writes via email. Cynthia Glanzberg, founder of OneTea, agrees: “Levels of compounds can change and be traced down to the individual crops, and it would be a very generalizing statement to rank them broadly.”

Richardson made many of the same points, emphasizing that all kinds of tea are healthy, and as we make our way through this somewhat flexible ranking, the reasonings behind why this is such a difficult task will become more and more clear. So pour yourself a cup of tea and come along for the ride. 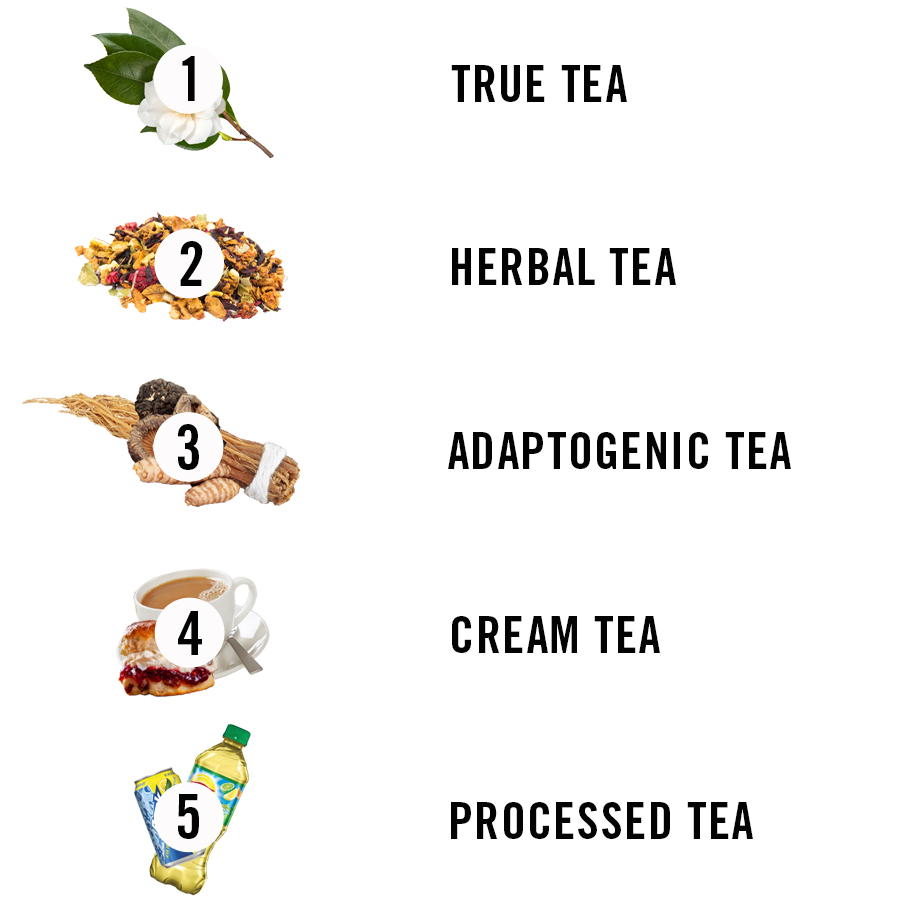 1) True Teas: True tea is a sweeping phrase that includes the likes of green tea, black tea, white tea and oolong tea, all of which are brewed from the leaves of the Camellia sinensis plant. Therein lies the problem when it comes to ranking these kinds of tea more specifically: Each one is derived from the same plant, and therefore has many of the same health benefits. “All tea made from the Camellia sinensis plant is part of a healthy lifestyle,” Richardson reiterates. “Specifics on it are challenging to say, and if you do hear somebody tell you that black tea is better for you than green tea — or what you probably might hear is, green tea is better for you than black tea — that is just not the case, since all tea is made from the Camellia sinensis plant.”

When we dive deeper into the science, this sentiment becomes even clearer. For example, look at green tea compared to black tea: The main difference between the two is that black tea is oxidized, similar to how an apple turns brown when left on the kitchen counter for too long, and green tea is not. This results in some nutritional differences, like how green tea contains much more of the antioxidant epigallocatechin-3-gallate (EGCG), whereas black tea is particularly rich in theaflavins, another source of antioxidants. All things considered, though, while green tea has a reputation for being healthier and higher in antioxidants, studies state that both black tea and green tea possess equally effective antioxidant capabilities.

Similarly, while common knowledge denotes that black tea has more caffeine than green tea, which could be a negative depending on how much caffeine you consume on a regular basis, Richardson points to that notion as another sweeping generalization. She explains that all kinds of true teas can have all kinds of different levels of caffeine, depending on the individual crop, how they were processed, how they were brewed and so on. One thing worth highlighting here, as we move forward in our ranking, is that all teas from the Camellia sinensis plant — true teas, that is — have caffeine, whereas the upcoming herbal teas are caffeine-free, so if you have a sensitivity to caffeine, herbal teas might be a better choice for you.

The big takeaway from true teas, though, is that while some might have slightly different levels of certain antioxidants or caffeine, they often balance themselves out, and thus, the scientific evidence does not strongly favor any one tea over another.

2) Herbal Teas: Herbal teas, like chamomile, peppermint and ginger, are made from dried fruits, flowers, spices or herbs, and as you can imagine, this means a huge variety of herbals teas exist. Once again, my experts say ranking them individually would most likely be a futile process. “Herbals all have their own benefits and potency based on how they’re grown, too, and are a whole different ball game from true teas,” says Glanzberg.

Herbal teas in general land in second place in this ranking simply because they have lower concentrations of antioxidants than true teas, which get the majority of theirs from the Camellia sinensis plant. However, herbal teas, especially chamomile and ginger, are particularly good for reducing nausea and stomach problems, as they have antispasmodic effects, meaning they can reduce unpleasant muscle spasms in the bowels. In general, though, herbal teas are great for hydration and tend to offer at least some protective nutrients, so much like true teas, all herbal teas are a good choice.

3) Adaptogenic Teas: As my colleague Tierney Finster wrote during the adaptogen boom in 2018, “Adaptogens are naturally-occuring substances in plants, herbs and many types of mushrooms (not the ‘magic’ kind, though). Ayurvedic and Chinese medicine practitioners have used adaptogens in their practice for thousands of years, but their properties have never received much attention in the West until now.”

The main selling point for adaptogenic teas — and adaptogens more broadly — is that they allegedly have stimulant properties that counteract the effects of stress on the body, and as we all know, stress can have some very real negative effects. More than anything, the current research suggests that adaptogens are most helpful in decreasing symptoms of fatigue and exhaustion, although one study also proposes that they can promote general health when used as a supplement with other more traditional medications for specific conditions.

All in all, more research is needed to come to a definitive conclusion about the effects of adaptogenic teas. Plus, since the FDA doesn’t monitor the quality or purity of herbs and supplements (like adaptogens) in the same way they do with over-the-counter products, you should check with your doctor before taking this stuff.

4) Cream Tea: A cream tea is much more than just tea — it refers to the English practice of having a small afternoon meal, consisting of tea and some combination of scones (which are closer to a slightly sweet biscuit than what we think of as scones), clotted cream and jam. While the tea itself is certainly healthy, scones are extremely fattening, clotted cream is virtually pure fat and jam tends to be incredibly high in sugar. So, not so great for you, all in all. Sorry, chaps.

5) Brisk, Lipton and Other Processed Teas: Richardson says to even call these bottled beverages tea would be a stretch, since they consist primarily of water and sugar. As I noted in my analysis of the ingredients in Lipton iced tea, “A single 20-ounce bottle of this iced tea contains — holy freaking shit-balls — a whopping 32 grams of sugar, which is equivalent to two whole Twinkies. When you consider that the American Heart Association recommends men consume no more than 36 grams and women consume no more than 25 grams of added sugar a day, one of these bad boys is essentially a day ender.” Lame.

So to review, there really is no way of going wrong with true teas and herbal teas, but adaptogenic teas should be discussed with your doctor first, and any other tea products with too much sugar should just be avoided altogether.