Where Have All These Male True-Crime Stans Come From?

The genre used to mainly be for wine moms and weird chicks like me. But now, it's practically a sausage party.

Among the benefits of growing up with practically zero parental guidance is that no one monitors what media you’re consuming. You can watch a TV movie on Jonestown at the age of 8 in peace and hide in a closet reading Helter Skelter while your parents scream at each other, reveling in horrific details about a family even more fucked-up than your own. And so, when I wasn’t reading Sweet Valley High books, I devoured ones about cults, murder and mayhem. But after years of being *that bitch*, it turned out I was just like all the other girls. After all, for women, loving true crime is as basic as it gets. 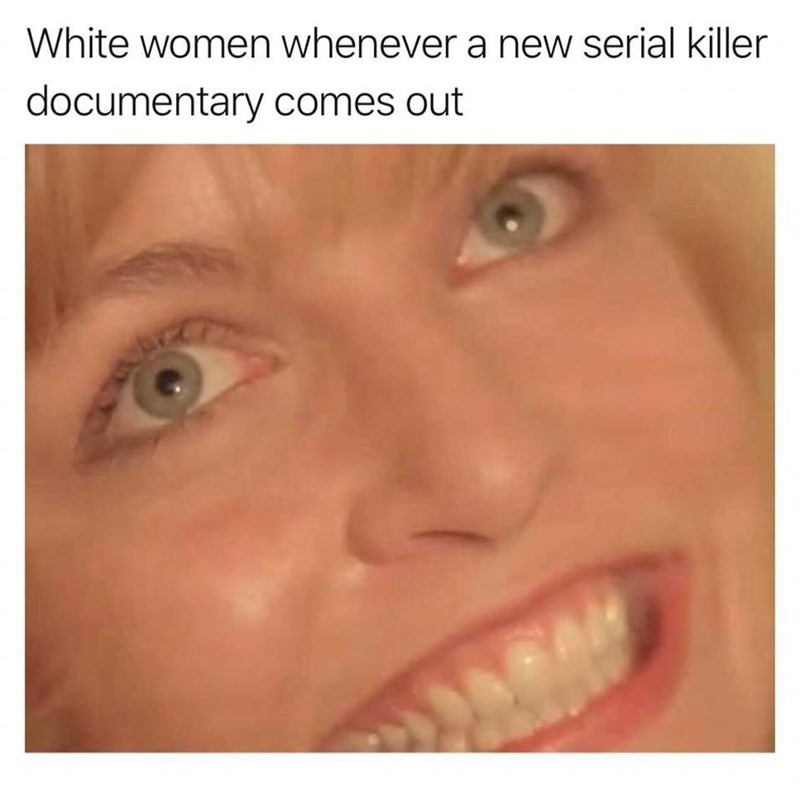 “I’m not sure a lot of people remember that there was a time when being really into true crime felt kind of like a dirty secret — you’d worry people might think you were a weirdo,” says Steve Huff, who ran one of the first popular true crime blogs, Huff Crime Blog, and began his career as a writer and reporter with the original Court TV’s crimelibrary.com. “But between stellar streaming docs like Making a Murderer and podcasts like Serial, there was this kind of group acknowledgment that a lot more people shared this ‘dirty’ secret than we ever knew.”

Despite true crime’s overwhelming popularity, however, it’s still mostly seen as a woman’s interest and the memes and numbers back that up. I have a true-crime podcast called Hollywood Crime Scene, and 85 percent of the members in its rather large Facebook group are female — numbers that match up with the audience demographics for other true crime podcasts. Social psychologist Amanda Vicary, a true-crime addict herself, conducted a study looking into why women are drawn to the genre, and the results make perfect sense. Although men are statistically more likely to be the victim of a crime overall, women are more likely to be the victim of a crime perpetrated by a non-stranger, and fear being the victim of a crime more than men do. Basically, women find that the genre gives them a sense of control over the uncontrollable.

Unsurprisingly then, Vicary’s study also shows that women use the genre as a means of educating themselves on how to best deal with an attacker. I can attest to this: I have at least six escape routes out of my house and have long thought about how far I could run to escape my killer. (That said, my plan isn’t to really run but to try to creep them out by acting like what they’re doing is a turn-on. Unconventional, I know, but it could work!)

Yet for all the focus on wine moms and weird chicks loving true crime, it definitely has its male devotees, too, but their interest is often for very different reasons. In particular, Huff believes that for a lot of men, the genre can serve as a “safe adrenaline rush.” “It’s the same reason dudes who are perfectly harmless in real life, might be total masters of a first-person-shooter game,” he tells me.

Moreover, whereas women often put themselves in the shoes of the victim, men usually relate to the people solving the case (e.g., the detectives or family members seeking justice). “I like it mostly for crime-solving,” says Bret, a 47-year-old in Denver. “Also, it’s fascinating to get a glimpse into the criminal mind. What makes crazy/evil people tick?”

“I tend to instinctively trust men I know who share this interest with me because whatever their motivations, they seem to possess a strong need to make things right,” Huff adds. “And while many people are drawn to the genre because they have a relevant life experience, with men, it definitely seems like that can often be a big compelling factor. It was for me, and it’s been for more than a few men I’ve talked to about it.”

John, a 31-year-old from Pennsylvania, got into true crime for this very reason. “I had a brother who passed away from an OD, and his death was a huge deal in Pennsylvania. It was the first overdose death in the state where they had enough evidence to prosecute and put away the people involved. I was at most of the court hearings and the case itself. It was interesting to see how they pieced together all the evidence and see how they came up with it. I saw a number of things I can never unsee during the trial; however, it oddly also gave me some peace of mind to know the truth of said events and the state of mind he was in.”

The men I speak to mostly don’t have any shame about enjoying true crime, though a lot of them mention that they’ve had moments where they were a little too enthusiastic about their passion in mixed company. Most were also cautious when bringing it up with the women they’re dating, despite the fact that so many women share their interest.

“Talking about true crime is definitely a sure way to get branded as a creep by females,” says Marc, a 42-year-old from the Bay Area. “I’ve had fascinating conversations about true-crime subjects with women who were into it, too, but those women don’t tend to cross my path very often.”

Bret also tries to keep his fandom to himself. “It’s definitely not the first thing I’d bring up on a date. I guess once I know someone and have demonstrated my non-creepiness, I’ll talk about it,” he tells me. “I try to have a sense of humor about it, too, when I do bring it up. Like, ‘Time for my murder stories.’”

Even Huff had to tamp down his wife’s suspicions early on: “I’d been surfing true-crime message boards, which are damn near as old as the internet. When my wife noticed how much time I spent there, it kind of freaked her out. She had what was then a normal reaction to discovering a man, in particular, is into true crime: ‘Holy crap, am I sleeping with a psycho?’”

It’s a question I’ve asked myself many, many times. In fact, I actually wish it was just because I found them reading a book about John Wayne Gacy.