What’s Up With Guys Becoming Obsessed With Ayn Rand in College?

For starters, impressionable young minds are always soothed when they're told their innate selfishness is both virtuous and a superpower

Just because I didn’t go to college doesn’t mean I don’t have experience fucking college guys. When my best friend from high school started at NYU in the 1990s, I was constantly hanging out at her dorm, and finally meeting boys who weren’t dipshit high schoolers or creepy old men who told me I was mature for my age. These dudes were age appropriate and worldly — at least it seemed that way. And so, I couldn’t believe my luck when I started fucking an aspiring screenwriter, which admittedly sounded way cooler back then than it does now.

One day the aspiring screenwriter asked me a series of questions out-of-nowhere. Namely: “Do you think you’re responsible for your own destiny?” and “Do you think you should sacrifice your happiness for others?” I could tell they were leading somewhere, but I wasn’t sure where, so I hesitantly answered “yes” to the first and “no” to the second. His eyes lit up as he screamed, “You’re a Libertarian!” I had no idea what that was, but he quickly informed me that I clearly believed in self-reliance. When he started talking about the elimination of social service programs and fire departments, I began to protest. But he simply handed me a copy of Ayn Rand’s The Virtue of Selfishness and promised it would change my life.

I took the book, which is a series of essays laying out Rand’s philosophy of Objectivism, and thought something similar to what Christopher Hitchens once famously said about Rand: “I don’t think there’s any need to have essays advocating selfishness among human beings; I don’t know what your impression has been, but some things require no further reinforcement.”

As I was reading it, though, I got more and more peeved. Call me crazy, but I have a propensity to reject any belief system that’s sold to me like Herbalife. Nothing will change my life, I thought, stubbornly, and certainly nothing introduced to me by mediocre dick.

I lost all interest in the guy, but I was curious enough to also attempt to read Atlas Shrugged. But folks, the writing is bad! “I got Atlas Shrugged as a gift from a friend in high school — one who was very into Big Ideas and Philosophy and How Humans Should Live,” MEL’s Miles Klee says. “It always looked dreadfully boring and I never read it, but I think the appeal for my buddy was the directness of the allegory. Rand has very obvious morals she’s trying to impress upon you. My friend was definitely always striving to reach his ultimate potential and Rand spoke to that. There’s almost a self-help element to it.”

Although my life wasn’t changed by her writing, I did learn something important: A guy who loves Ayn Rand is a red flag.

Although famous people from Alan Greenspan to Amber Heard have been influenced by her work, the ultimate Ayn Rand fanboy is Paul Ryan, who really nails the archetype as someone who has the appearance of a serious thinker, but is actually an intellectual lightweight. Widely promoted by the media as a policy wonk, Ryan revealed himself to be nothing more than a meathead P90X obsessive with this embarrassing photo shoot for TIME Magazine: 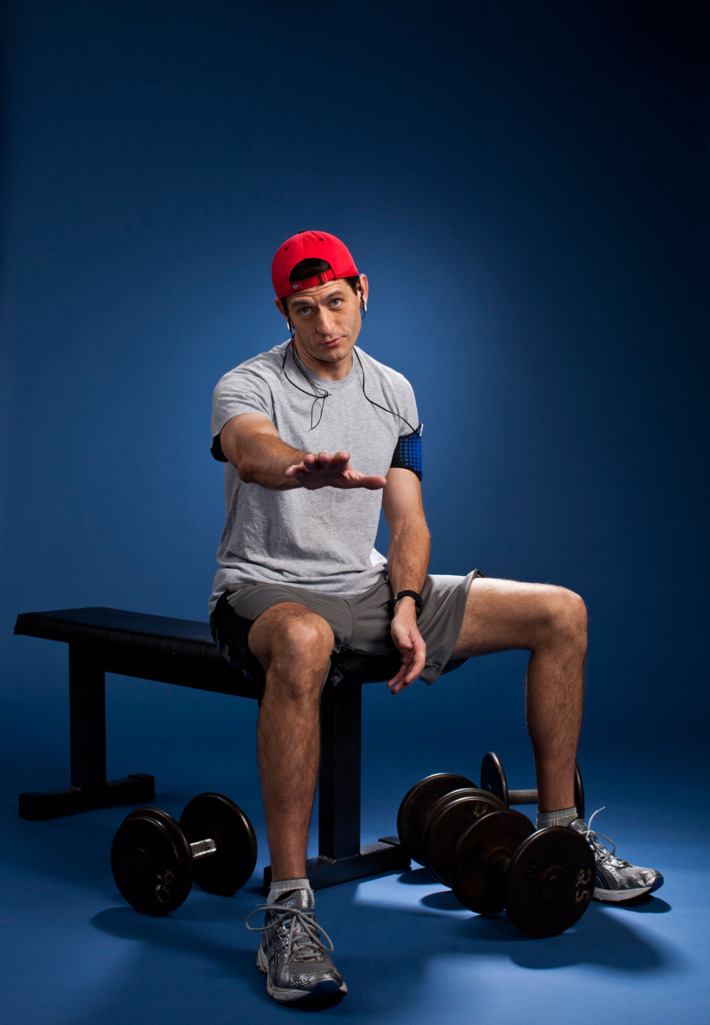 He’s definitely the guy at the gym who does a lot of performative grunting, leaving your pussy drier than a day-old baguette.

Despite the fact that Rand’s work isn’t taken seriously in the academic world, she remains as popular as ever. Atlas Shrugged still sells about 300,000 copies per year, and the Ayn Rand Institute, a nonprofit think tank in Orange County dedicated to promoting Objectivism, charges forward, too — no matter that all evidence points to human survival depending on cooperation and putting the whole before the self.

“The fly in the ointment of Rand’s philosophical Objectivism is the plain fact that humans have a tendency to cooperate and to look out for each other, as noted by many anthropologists who study hunter-gatherers,” research psychologist Denise Cummins writes. “These prosocial tendencies were problematic for Rand, because such behavior obviously mitigates against ‘natural’ self-interest and therefore should not exist.”

How, then, is it possible that after the destructive effects of the “greed is good” 1980s and financial crises of the 2000s, that young male college students still find her ideas appealing?

Klee has a few theories. “Men are sometimes uncomfortable with the ambiguity of other literature — whereas these are very straightforward tales about men who are strong and overcome the feebleness of society,” he tells me. “Young men are especially prone to this kind of cynicism about the modern world that revels in the idea of ‘What if there were a guy so cool he just smashed the whole dumb system with his genius?’”

Along those lines, 38-year-old Michael discovered Rand while majoring in philosophy at California State University, Sacramento. “I was drawn to Ayn Rand because I was looking for a philosophy that explained the world as thoroughly as a religion did,” he explains. He also liked the clarity in which Rand broke down her ideas. “It was reassuring knowing that someone smarter than me had already done all the critical-thinking heavy lifting, and all I needed to do to win an argument — or feel self-assured in my everyday choices — was to parrot her thoughts.”

“As a young white male, growing up in a world where everyone globally was critical of the systems of economics and governance created by white men, that in my opinion, had made the world safer, richer, freer, it was easy to cling to Rand,” he continues. “Capitalism is the solution to everything, and hedonism in the name of those institutions that prop up capitalism is a righteous endeavor to Rand and Objectivists. You could consider yourself a good and moral person for doing the most self-serving things. Her works provide cover from your introspection.”

Joseph, another philosophy major, was turned onto Rand’s work through the music of Rush, something I saw in a bunch of Reddit threads. “Anthem and We the Living particularly influenced their breakthrough 1976 album 2112. Reading the liner notes led me to Ayn Rand. Neil Peart [Rush’s primary lyricist] is a musical and intellectual icon to me and had so much to do with my interest in philosophy.”

He also felt his masculinity was somewhat validated by her idea that everyone can be a hero if they drop the hindrance of altruism. “As somewhat of a bookish, sensitive weirdo, I was drawn to any story that portrayed the idealistic underdog,” he tells me. “I felt empowered by the strong themes of individualism and of standing alone, if necessary, against the powers that be.”

Although Joseph kept his interest in Rand on the DL, Michael was an OG “Debate Me Dude”: “I’d debate with my girlfriend frequently about her socialist ideals, but most of the time, I tried searching for common ground with her because I loved her and considered her intellectually inferior (and by extension, not worthy of the time and energy it would take to debate with). I mostly reserved my intellectual energy for debating online on UBB forums and IRC.”

Luckily, Michael has since left Objectivism behind; in fact, he’s now a nonprofit attorney helping victims of domestic violence and a supporter of Elizabeth Warren. “I fell out of touch with Objectivism and Libertarianism around 2008, when the market was crashing, and financial institutions were being raided by corporate robber barons,” he says. “I was working for credits at a bankruptcy clinic in law school at around the same time. I represented some clients who were being forced into bankruptcy, and I couldn’t help but be turned off by the idea that someone, somewhere was saying that these acts were righteous, and what’s more, suggesting that what caused all of these problems would simultaneously be the system that repaired them.”

Joseph also saw the light. “As I matured, I was drawn to more inclusive models of society,” he explains. “As a teenager, it’s easy to make things about yourself. I realized that Rand abhorred anything that restrained industry and the personal accumulation of wealth. I sided with the working person. I believe Objectivism is a philosophical and psychological justification for the worst ideas in conservatism and capitalism. It allows those with financial and political power to support the most heartless policies and practices.”

I think we can all give a pass to a young college student figuring stuff out, but past the age of, I don’t know, 25? Come on. Case in point: My friend told me a story about her fortysomething Libertarian boyfriend and his frustration with her as she unsuccessfully tried to parallel park. When she said she was just a bad driver he shouted, “You need to read Atlas Shrugged!” — a hall-of-fame red flag and an extremely weird way to learn how to parallel park.

I never gave the NYU wannabe screenwriter the satisfaction of letting him know I read the book he gave me — my own act of selfishness. Unfortunately, acting in self-interest isn’t solely the domain of Ayn Rand lovers. Most of the time, though, we have to find out that someone is less than altruistic the hard way. So it sure would be nice if it was always as easy to detect as seeing a dog-eared copy of Atlas Shrugged on their nightstand, right next to the condom that will most definitely now go unused.