What Would It Actually Be Like to Be Digested in a Sarlacc for a Thousand Years?

The bad news is, there’s a surprising number of Sarlacc-like animals out there — the good news is, a millennium-long digestive process is basically impossible

About a quarter of the way through Return of the Jedi, the film unexpectedly provides a vision of Hell. After being exposed, captured and tormented by Jabba the Hutt, Luke Skywalker, Han Solo and Chewbacca learn they’ve been sentenced to death-by-Sarlacc, a grim outcome that sounds unbearable even when described by the melodiously voiced C-3PO. Translating Jabba, he informs them they will be taken “to the Dune Sea and cast into the Pit of Carkoon, the nesting place of the all-powerful Sarlacc.” That, as Han quickly suggests, doesn’t sound too bad. Then Threepio elaborates, continuing, “In his belly, you will find a new definition of pain and suffering, as you are slowly digested over a thousand years.”

The appearance of the Sarlacc itself only makes it worse. In the original version of the film, it was little more than a pit with some tentacles, a mindless maw that had evolved only to suck in anything that stumbled into its clutches — or anyone thrown in. (The Special Edition adds a beak, but like almost every Special Edition change, it blunts the impact of the original vision, making an image out of a Freudian fever dream look a bit like an angry vagina giving birth to a baby bird.) The Sarlacc looks slimy and hungry, but it also seems patient. Any creature that depends on hapless prey — and the occasional condemned prisoner — would have to be. And of course, anything that takes a thousand years to digest a meal would have to be patient.

A thousand years. A human wouldn’t ordinarily live for a thousand years, but maybe the Sarlacc had the ability to preserve its prey, feeding them nutrients and otherwise sustaining them as they digested. Would it be painful? It would have to be painful, right? Jabba certainly seemed to think so. Unless the Sarlacc had some kind of digestive system unlike anything on Earth, those thousand years would involve the chemical breakdown of the body, only in Sarlacc time it would maybe be slower than usual — much, much slower. What would it feel like? And what would anyone trapped in the belly of the Sarlacc think about all that time? Would it be nothing but pain and regret? Would you eventually go insane? Would this insanity provide any sort of escape?

At 10, when I first saw the movie, I thought about these things a lot. Truth is, I still think about it, and can think of few ways I’d like less to die. If nothing else, it seems like the worst way to die in the Star Wars universe: Getting roasted alive and devoured by Ewoks might be awful, but it would also be awfully cute.

From the perspective of adulthood, the Sarlacc now seems like a far-out creation, but it’s not without some basis in reality. In her book The Science of Star Wars, astrophysicist Jeanne Cavelos suggests Return of the Jedi drew on the ant lion (or antlion) for inspiration. In larvae form, the insects burrow into pits then wait for unsuspecting passersby — mostly ants — to stumble into them, pelting those who try to escape with sand while making the climb impossibly steep. Watching a video of the antlion larvae at work, it’s impossible not to think of the Sarlacc.

Paul Mayer, the Fossil Invertebrate Collections Manager at Chicago’s Field Museum, seconds the antlion while also noting a resemblance to another creature: the bobbit worm, also known as the sand striker. “It has a deep burrow where just the head is sticking up,” says Mayer. “It’s also aquatic, which makes it quite different.” Indeed, a Sarlaccian-type creature would be more likely to live under the sea than in the sand, by Mayer’s reckoning. “Underwater you’d have a lot more buoyancy,” he says. “So something heavy like that could move around more easily. It’d be easier to dig through the soft sediment of the ocean than it would be through the sand.” And, if anything, it might end up looking even more nightmarish: The bobbit worm has three jaw-like features that help it drag fish and octopi into its death pit. It’s pretty terrifying!

But you don’t have to go to the bottom of the ocean to meet a Sarlacc-like predator. Alise Ponsero, who holds a PhD in molecular biology and currently works as a postdoctoral fellow in computational biology at the University of Arizona, cites the sand spider and wolf spider as terrestrial creatures. Both hide and trap those unfortunate enough to wander into their paths, but she notes that the Sarlacc most reminds her of the polychaete worm. “These worms,” Ponsero writes via email, “live in the sand in marine ecosystems. Some of them, like the lugworm, live in a hole in the sand, and filter water. When you look at their head, you’ll see that they have a prostomium with ‘teeth’ and sometimes palps. Here’s the mouth of a Nephyidae or the mouth of a ragworm, you can see that they look a bit like the Sarlacc head.” 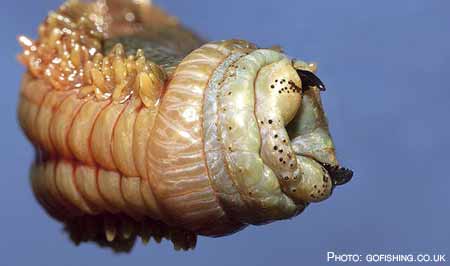 In fact, the deeper you delve into the earthly parallels to the Sarlacc, the more nightmarish the creatures you encounter. Fortunately, none of them seem particularly interested in, or capable of, devouring humans. Holland C. Dougherty, who works for the University of New England in New South Wales, Australia, in modeling of ruminant nutrition, specifically cattle and sheep, suggests that the least realistic element of the Sarlacc is its size. “If I wanted to take a Sarlacc and make it plausible,” she suggests, “I’d shrink it by quite a bit, such that it could survive on the occasional deer-sized animal blundering in, especially if it were in a desert, given the scarcity of food.” This smaller Sarlacc would, per Dougherty, also not waste time with digesting food for a thousand years. “It would digest things fast, and then have a very low metabolic rate to allow for tiding over between prey events.”

Dougherty’s not alone in thinking that the whole thousand-year digestion cycle doesn’t make a lot of sense. “My take is that Jabba doesn’t have a degree in biology,” says Ponsero, “especially since the [description] seems to indicate that the prey would stay alive in the digestive system (the pain and stuff). From what I know, all internal digestive systems that use a digestive cavity are anoxic. You won’t have much oxygen in a stomach, and prey, even swallowed as whole, would suffocate rapidly. Plus the Sarlacc has teeth, so why wouldn’t it chew or grind its prey to help the digestion? Keeping prey alive in your digestive system isn’t a good evolutionary trait, because the prey could cause damage from the inside.”

Ecologist and science-fiction author Adam Gaylord goes a bit further, writing via email, “There are plenty of examples of relatively big organisms keeping other, relatively small organisms alive within their own bodies. Some of these interactions are parasitic in nature, i.e., the internal organism benefits from the relationship to the detriment of the host. However, for humans to form a similar mutualistic relationship within the all-powerful Sarlacc, the inside of the great beast would need to provide its prey (us) with everything we need to survive (food, water, basic cable), which would take a lot of energy and resources the Sarlacc likely wouldn’t want to give away (especially given the harshness of the habitat in which it lives). The Sarlacc also would need to benefit (i.e., eat) what its prey produced (i.e., feces). I’m afraid, in the end, the cost-benefit calculation for keeping a macro-organism alive in your belly so you can feed off its relatively nutrient-poor droppings just doesn’t add up.”

There’s some cold comfort there: The Sarlacc would have little evolutionary advantage to keeping its prey alive during digestion in part because our poop has little to offer in the way of nutrients. So maybe Han had it right: Worst-case scenario, you’d fall in the Sarlacc and be digested relatively quickly, writhing in fear and searing pain only as long as it takes to suffocate in the airless belly of the horrific beast.

Maybe that’s enough to help you sleep at night. Maybe the scientific implausibility overrides the fear of being eaten alive, slowwwwwwly. Maybe you can stop dwelling on one line from a decades-old movie, a line that makes you think about just hanging out in the slimy digestive system of an alien worm, being kept alive year after year experiencing death in slow motion with nothing to do but think about the choices that led you to this fate.

I wish I could say the same.

Keith Phipps writes about movies and other aspects of pop culture. You can find his work in such publications as the Ringer, Rolling Stone, Vulture, Decider, Polygon and the Verge. Keith also co-hosts the podcasts 'The Next Picture Show' and 'Random Movie Night' and lives in Chicago with his wife and child. Follow him on Twitter at @kphipps3000.