Which President Had the Best Throat Game?

In late June, a heated political argument erupted on Twitter. It began when several photos of former President Barack Obama gobbling hot dogs were posted with the caption, “Obama really the glizzy gulper.” (Glizzy is slang for hot dog in several U.S. regions and was spontaneously inducted into meme speak this year.) Such a bold assertion about Obama’s throating aptitude immediately caught the attention of Donald Trump supporters, who responded by arguing that their king “could throat more than him.” And thus, the presidential Glizzy Wars began. 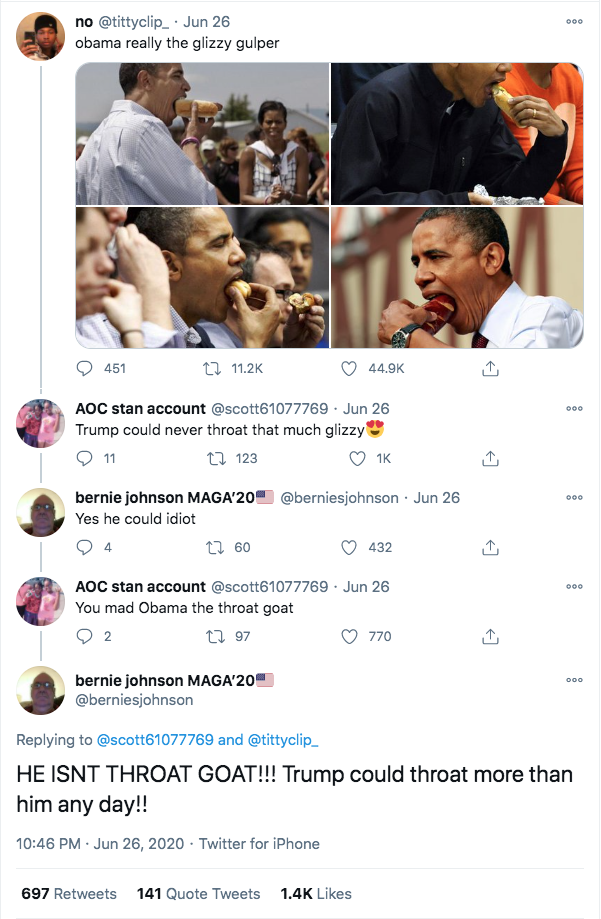 In the months following this passionate altercation, photos of past presidents and President-elect Joe Biden forcing hot dogs down their gullets have inundated the internet. The American people have responded appropriately, casting votes on social media to inaugurate a Glizzy Gladiator who represents our great nation and can gulp frankfurters with ease.

Here, Trump reveals the tip of one slim glizzy and fumbles to direct another into his gaping mouth:

Below, President Franklin D. Roosevelt enjoys a peaceful glizzy in nature, President John F. Kennedy takes a slanted approach to glizzy gobbling, President Gerald Ford prepares for what appears to be a deep penetration, and Obama once again nudges his tonsils with a cylindrical meat sausage:

In this powerful photograph, President Dwight D. Eisenhower looks like he’s about to give the Gluck Gluck 9,000 to an approaching glizzy, though you can tell by the existing bite mark that he’s more of a nibbler:

And finally, Biden proves that he too has an esophagus of presidential caliber, using gravity to help thrust a lengthy glizzy straight into his cerebellum:

As for which of these presidents has or had the most extraordinary throating proficiency, well, we can safely say who needs work. On a July episode of Desus & Mero, Nathan’s Hot Dog Eating Contest champion Joey Chestnut was shown one of the above images of Trump seeming to mishandle a glizzy and said, “It looks like he’s just making a mess of it.” Not in a good way, either.

For further consideration, I shared my presidential throating photos with adult film star and deep-throat expert Siri Dahl, who immediately tells me, “I notoriously love both BJs and hot dogs.” By her judgment, “Obama wins, obviously. He’s got that thing so far inside his face. I’m amazed. Just another reason I miss Obama, I guess.” (Chestnut also praised Obama for “takin’ it,” which means he earns double approval.)

My opinion? If photos tell the full story, yeah, Obama could swallow a glizzy without even chewing. Trump and Kennedy both need to work on their approach: Maintaining a straighter insertion would allow for deeper penetration. Roosevelt and Ford, meanwhile, look like they have what it takes to be Glizzy Gladiators, but we need more objective evidence. And you already know how I feel about Eisenhower.

If you want to achieve glizzy greatness like Obama, Dahl says maintaining a moist mouth is crucial: “Hydrate! Drink plenty of water first, especially if your bun is dry. Shoving dry buns and girthy meat down your throat is a recipe for failure. Alternatively, you can also douse your meat in mayonnaise if you need some additional lubrication.”

But be careful before you try slamming a whole dog at once, because the choking risk is real. I asked a spokesperson for Major League Eating if they could give advice on throating hot dogs like a Glizzy Goblin, and they responded, “I don’t think we would participate because of the possible danger involved in promoting non-sanctioned competitive eating. We always have safety measures in place.”

And yeah, while you may be inclined to prove your manhood and presidential capabilities by gobbling a glizzy, the safest and healthiest way to consume one is both slowly and carefully, because chewing your food well makes it easier to swallow and digest.

In other words, leave the throating to professionals and the naturally gifted, like Obama.