Are Police Really Enforcing the Speed Limit From the Sky?

There’s no worse place on this planet to drive than Nebraska. I understand traffic in L.A. sucks and the subterranean streets of my hometown of Chicago are stressful, but driving through Nebraska is pure mental anguish. The road is so long and flat that it disappears into the horizon; there isn’t another driver (or town) for miles. And every once in a while, you’ll see a sign reminding you to obey the speed limit because you are allegedly being monitored by aircraft overhead.

Nebraska lists the Cessna Piper Super Cub as its primary speed-limit-enforcement aircraft. Cessna aircrafts like the Super Cub are able to stay in the air before having to refuel for incredibly long periods of time, but compared to the kind of high-definition, infrared and night-vision technology Nebraska outfits its helicopter with, the 39-year-old Super Cub is pretty outdated.

Plus, according to Bret Viets, a pilot for over 30 years, they police by stopwatch as opposed to radar gun. That is, those markings you see along particular stretches of highways at specific distances apart are for Super Cub pilots who “have stopwatches and [will] time how fast a car travels between them, and then will convert the clocked time to miles per hour.”

If it turns out that the car is speeding, the pilots will radio down “a description to an officer on the ground, and follow the car until it’s been stopped. They then tell the land-based officer if they have the correct vehicle, which is necessary since the license plate usually can’t be read from the air.”

Another way for officers to tell if a car is speeding is to simply “fly low above the car at either the same speed or slower,” one California Highway Patrol officer tells NPR. Aviation patrols in California are mostly done by helicopter now, the officer adds, and though they may monitor speed while out on other patrols, they don’t make it a priority. This aligns with the findings of a 2007 Department of Justice study, which found that among the vast number of police departments with aviation departments, “speed enforcement” was at the bottom of “functions performed.” 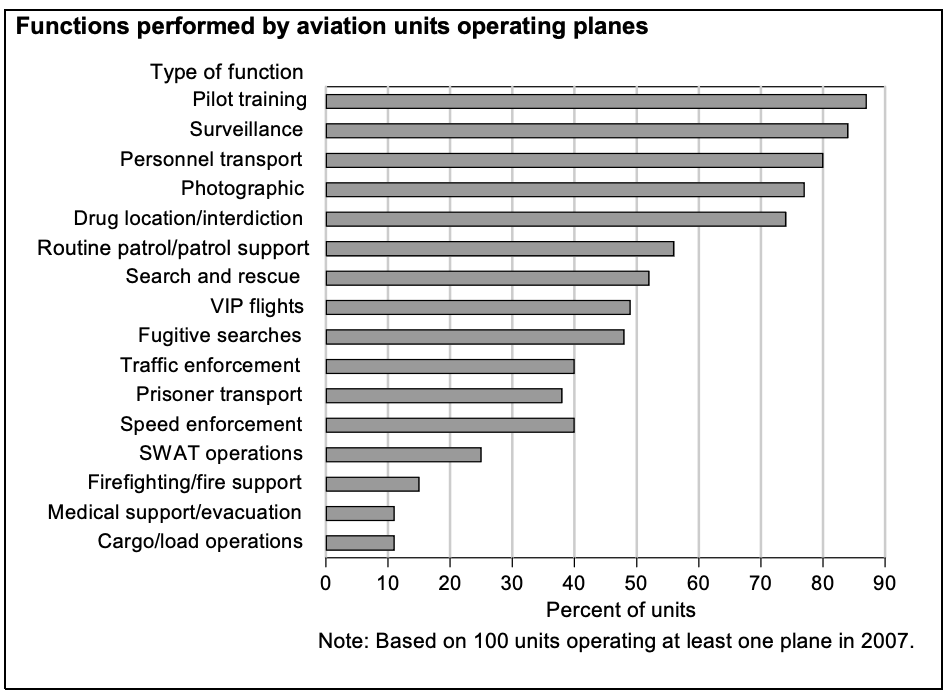 All of which is to say, they might be up there, but there’s a slim chance they give a shit about you how fast you’re driving. (Unless, of course, you’re weaving through traffic maniacally enough to catch their eye.)

If anything, some state police departments have decided the whole flyboy thing isn’t worth it. In 2011, for example, Virginia ended its aviation support completely, noting that it cost $150 an hour, not counting overtime. Not to mention that between 2008 and 2011, the department only deployed its aircraft for traffic-monitoring five times, resulting in 87 total tickets. Maryland followed suit shortly thereafter, as did New York, (though not completely).

But don’t press down on the gas pedal just yet. On the flip side, many other police departments are ramping up their aviation technology. As of 2017, the Ohio State Highway Patrol’s Aviation Department boasted 17 aircraft, some equipped with “Forward Looking Infrared [technology] that can be an effective tool for searching for fleeing traffic violators.” Meanwhile, Indiana and Maine are implementing similar measures. So your best bet is to see what your state police department is up to.

Because the only thing worse than driving the open road in Nebraska is having to needlessly travel it once more — this time for a court date over a speeding ticket that more or less fell from the sky.