What Does Apple Really Know About Me?

My iPhone is basically an extension of my body, so they must know a lot, right?

If I could only bring one thing with me to a deserted island, it would be my iPhone, because as a millennial who was forcibly born into this technological death society, life without an Apple device is entirely unimaginable. In fact, considering how much time I spend on their devices — an iPhone, a work MacBook and a play MacBook — I suspect Apple knows more about me than I know about me. And quite frankly, I gave up on privacy long, long ago.

But since Apple markets itself as a champion of privacy in a world where private messages are mere currency at companies like Facebook, I wanted to see what they really know about me. So, I asked. 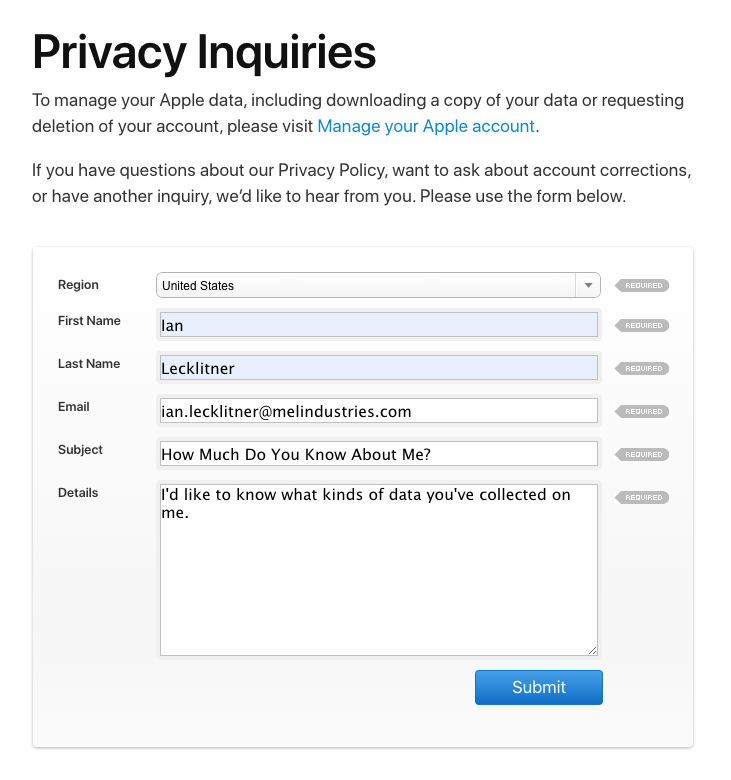 One of their agents responded, saying, “At Apple, we take the privacy and security of your personal information very seriously. We design our products and services with this in mind.” A boilerplate response, obviously.

He also sent me a link where I could request access to the “personal information that you store with Apple,” which I did… and am still waiting for. Apparently, it can take a while. But in the meantime, the gist of what I can expect Apple to send me is incredibly easy to find: “A list of my downloads, purchases and repairs, but not my search histories through the Siri personal assistant or the Safari browser,” according to USA Today.

That might not seem like much and would certainly give credence to Apple respecting privacy, and the truth is, Apple really does attempt to minimize the data it collects on its users. Apple has filed government briefs and implemented specific protective features favoring user privacy on numerous occasions, pissing off other notable tech giants, advertisers and law enforcement agencies who want to spy on you. And as far as transparency goes, Apple is about as open as it gets when it comes to allowing users to view their own data and explaining their privacy policies in plain terms.

Like the Apple agent said, this is done primarily by designing Apple products to save data on the devices themselves, as opposed to on their own Apple computers in their own Apple headquarters. For example, your fingerprint and Face ID stay on your device, not in some Apple-owned cloud. Their inclination toward privacy might be in part because Apple makes most of its money from selling hardware and services, rather than through large-scale advertising, but still — any attempt at privacy in the largely villainous tech world is welcome.

Now, it’s possible that Apple has some secret cache of user data hidden away somewhere, but for the time being, it seems they’re playing fair.

Another nice thing Apple does is give you options to further minimize what they know about you: Deleting your data stored on iCloud, downloading an encrypted iCloud backup only to your Mac, allowing users to review maps of the locations certain apps are tracking you to and so on.

All of this is to say that the apps you have on your Apple devices are likely collecting a whole lot more data on you than Apple is. And you can expect that data to say a lot about who you are and what you do. “While they may not know everything about us, giant tech firms often know far more than one might believe,” says Joseph Steinberg, author of Cybersecurity for Dummies. “I often begin presentations on privacy by asking members of the audience if they believe that major tech companies could produce relatively accurate lists of all Americans having affairs. The initial response is usually a nearly unanimous and confident ‘no way.’ During the first few minutes of my presentation, I discuss how any popular app that sees the location of smartphones can extrapolate many data points, including, for example, where people are sleeping — based on where their smartphones are motionless for hours — when two phones that are usually together at night aren’t, when phones are at a location which public record shows is owned by the users of the respective devices, when phones are at hotels and so on. When, less than 10 minutes after initially posing the question about tech firms having the ability to assemble a list of people having affairs, I poll the audience on exactly the same issue, the result typically flips into a totally unanimous ‘of course.’”

So, if I could only bring one thing with me to a deserted island, it would still be my iPhone. But I’d delete Facebook first.