Can you make it to December 25th without hearing ‘Last Christmas’?

Many Christmases ago, as a kid with an extremely limited budget, I decided to stop by the CD store in town — yes, such a place did once exist — and buy a cheap gift for my parents. In light of the season, and because I knew they liked playing Christmas tunes leading up to the holiday, I browsed the compilations of these songs until I came upon one with a track list of titles that were unfamiliar to me. The album was also, like $5. Perfect, I thought, that’s one thing sorted!

But when Christmas morning rolled around, and my folks pretended to be excited about opening this present, and even went to the trouble of putting the CD on for the family to listen to, what we heard wasn’t any traditional classic or even a contemporary favorite that any of us knew. It was a bright, glossy, synth-laden pop confection that startled us with its neon cheesiness. It was “Last Christmas,” a 1984 hit by Wham!, the duo of George Michael and Andrew Ridgeley. “Last Christmas, I gave you my heart/ But the very next day you gave it away” goes the hook that launches the song. “This year, to save me from tears/ I’ll give it to someone special.” My siblings and I were too young to be familiar with this, and it was a far cry from my parents’ preferred R&B and soul, so they were baffled, too. Within a verse, the whole family was laughing at this bizarrely earnest, though undeniably catchy, exercise in commercial kitsch.

It became something of a tradition in our household to play “Last Christmas,” usually on Christmas Eve, and sing along, remembering our initial surprise over it. In time, we realized the song was indeed quite popular, at least outside the U.S. — and over the years, it seems to have enjoyed a renaissance here as well. Now it’s practically a staple of retail holiday playlists, and this year it got the movie treatment: Last Christmas is a Paul Feig-directed romantic comedy starring Emilia Clarke and Henry Golding that boasts… well, let’s call it a “poorly conceived story,” per Rotten Tomatoes.

It’s this new heyday for “Last Christmas” that has made a ritual known as “Whamageddon” so fun. The idea is that, starting on December 1st, we’re all entered into a battle for survival: As soon as you hear “Last Christmas,” you’re eliminated. (Yes, I’m afraid that if you watched the music video above, you’re already out of the game. Whoops!)

As soon as you recognize those signature sleigh bells, you’re in Whamhalla, a kind of afterlife for participants who are now free to enjoy “Last Christmas” on a permanent loop, if they’re into that kind of thing. No one can stop you from tricking your friends into losing, but the real pleasure here is the seeming inevitability of Ridgeley’s and Michael’s vocals, and that saccharine melody, which were specifically conceived with the vaunted U.K. Christmas singles chart in mind. The song is designed to find you out, just as it found my family all those years ago. Its bright chiming — an inoffensive, unmistakable and broadly appropriate sound for the season — is to Christmastime what confetti is to a ticker-tape parade, the substance that fills the air. And as you’re bound to encounter it sooner or later, it feels less like a random event, and more like the universe teasing you. In theory, it’s a Rickroll without the human agency, only the quality of fate.

What’s funny is that, to the degree one may try to avoid “Last Christmas” in the weeks leading up to December 25th, it’s a matter of shunning the corporate side of this month: You’re at highest risk for getting Whammed when you’re out shopping for presents, running other holiday errands or watching Christmas TV episodes and movies, so taking Whamageddon seriously means regarding these trappings as especially dangerous, and becoming something of a recluse, free of the capitalist frenzy just outside your door.

The Whamageddon Facebook page, which has more than 10,000 members, celebrates that curmudgeonish effect: “Become the envy of your friends and family,” the organizers write. “Enjoy being a Christmas grinch.” People describe changing their commutes and, in the case of one party DJ, outright banning the song despite constant requests, all to last another hour in the great contest, which is now observed from Sweden to California and everywhere in between. 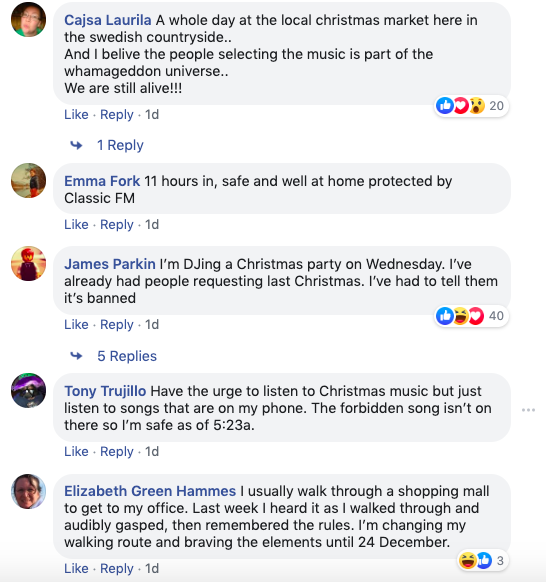 Ironically, those most on guard against the forbidden anthem wind up coming together through this antisocial ritual, sharing in victories and assured defeat alike. Which, when you get right down to it, is a decent microcosm of Christmas itself, at least in the Western world: an inescapable phenomenon that unites even its haters. “Last Christmas,” too, is a perfect exemplar of this strange and circular attraction, for while it recalls a one-sided breakup, it also winks at love’s eternal folly in spite of precedent: “But if you kissed me now / I know you’d fool me again.”

We can gripe about Christmas music as much as we like, and still it tricks us into hearing it again; our resistance to this genre is academic, the pursuit of dissenters with something to prove. Yet maybe, if we’re honest with ourselves, these songs are actually kind of good.