The Rise of the Weird Spotify Playlist

Hm? What am I listening to? Oh, just my favorite playlist. I’m sure you haven’t heard of it.

Okay, let’s back up for a second.

Each day we take a stupefying reality for granted: Humanity hasn’t only been creating music since prehistoric times, but we now have the technology to summon almost any song at any moment. The streaming era, for all the difficulty it poses to working musicians, has released the listener from the confines of their own digital library — the range of access no longer depends on the particular audio files you own. It’s gobsmacking when you think that just over a decade ago, you couldn’t download a Beatles album on iTunes, but five years later, you could have their full catalog in your phone wherever you went, without ever buying a single record. Pretty crazy!

As a result, we’re saturated in an entire universe of sound, and the megahits you hear on the radio complement your frictionless browsing of niche subgenres and obscure bands that might otherwise have gone undiscovered. So, too, has the art of the playlist — a cultural staple since people began sequencing their favorite jams on blank cassette tapes — evolved into something unprecedented. In the old days, a mix was most probably devised for one of a few common needs: to soundtrack a party, to sing along with on a long drive or to impress a secret crush. In order to make it portable, you had to commit a physical object (such as a CD) to the task. Now, operating purely in the cloud, we build disposable playlists for every last mood and occasion.

But even that isn’t enough. We have to push the playlist to extremes that the characters from High Fidelity never dreamed of. We need playlists so specific that they’re… you know… weird. 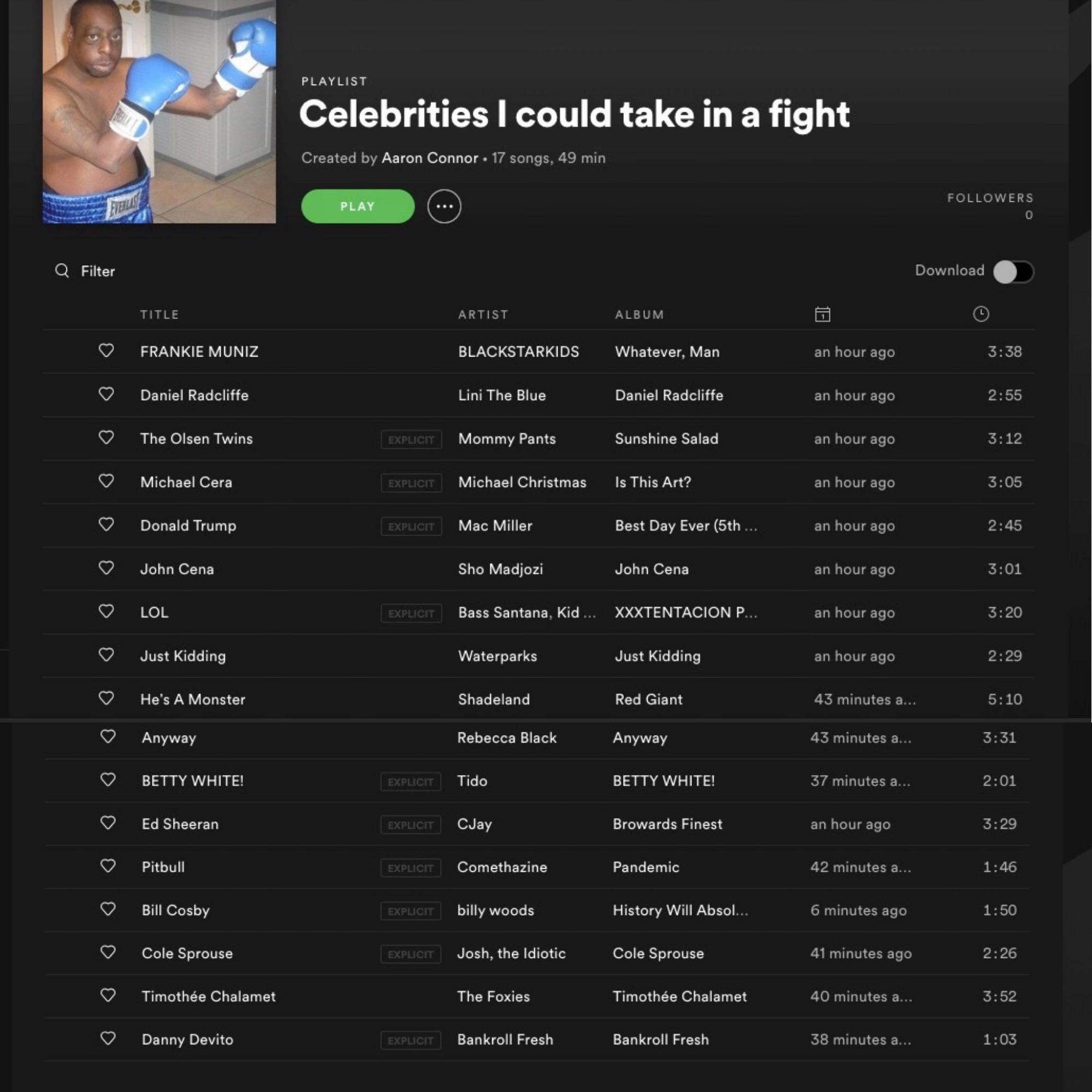 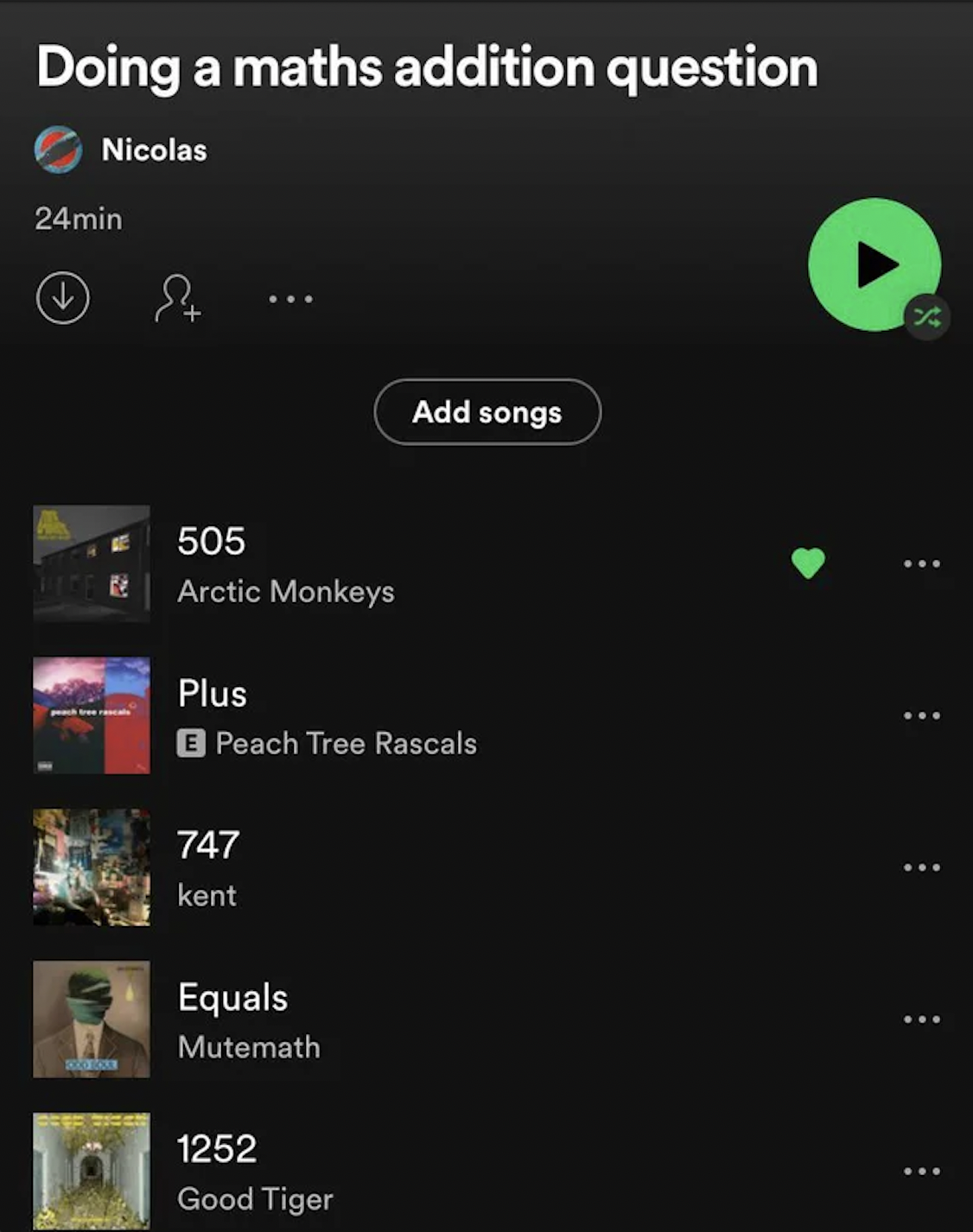 For about a month, a guy named Matt has been posting screenshots of strange and/or joke mixes to a Twitter account, collected via DM, and he mods a subreddit where users can share whatever oddities they find. Interest has been explosive: @weirdspotify is on pace to claim half a million followers in very short order. That popularity has, in turn, inspired further bizarre playlists, and thus more content for the pages.

It’s the first we’ve seen songs arranged not according to some kind of sonic theme or continuity but for the effect achieved by the list itself: To actually listen to these is sure to be a jarring experience, a randomized mishmash of styles and vibes. The narrative spelled out visually, however, is seamless, because by searching for any given word or phrase in Spotify’s archive of 70 million tracks, you’re bound to find it as a song title. As memes, the images often present a highly contextualized monologue, e.g., what you might say when “you are trying to summon Satan with your friends but your mom calls you.” 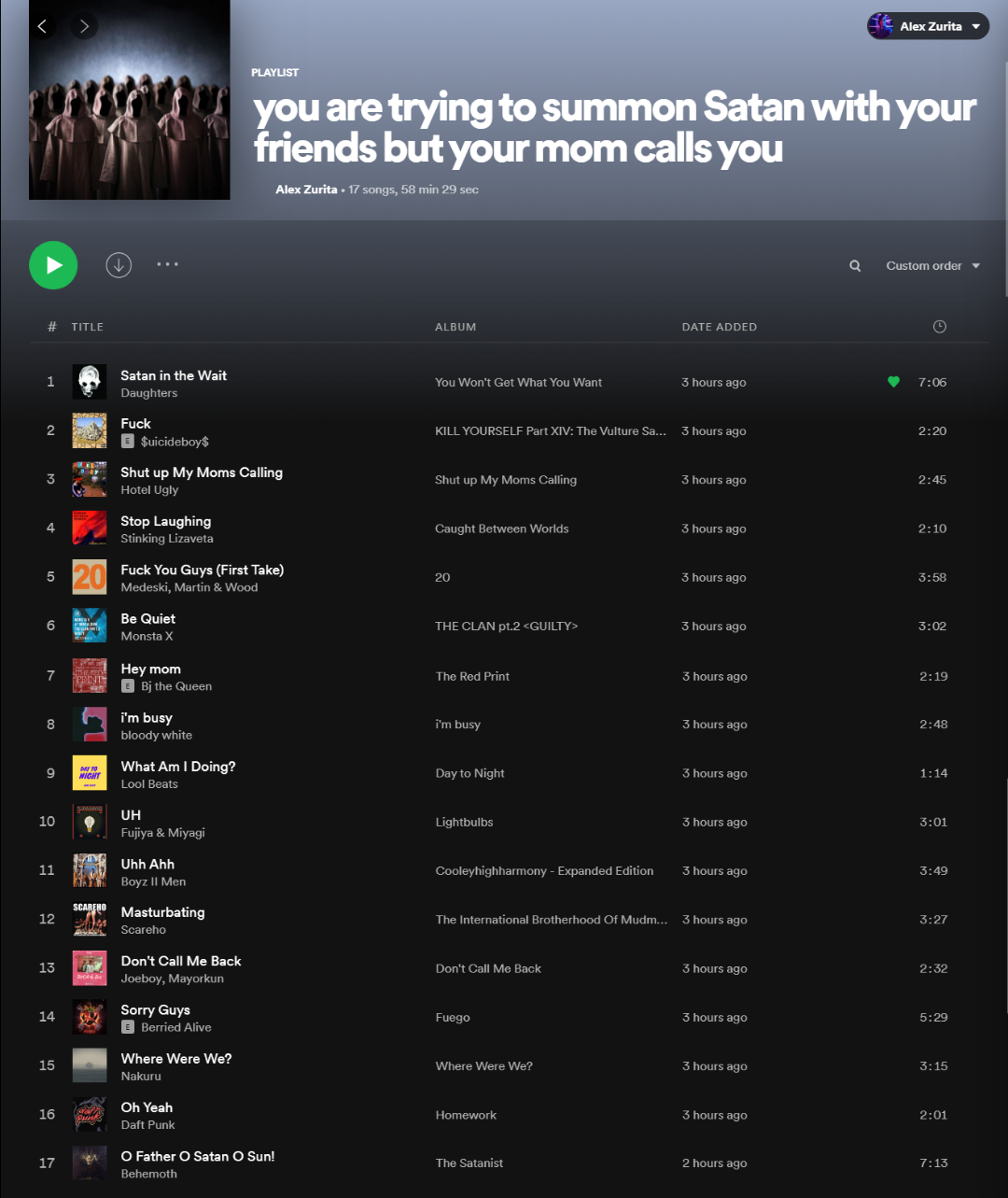 That’s not to say the weird playlists always take the shape of a script. This one’s a study guide: 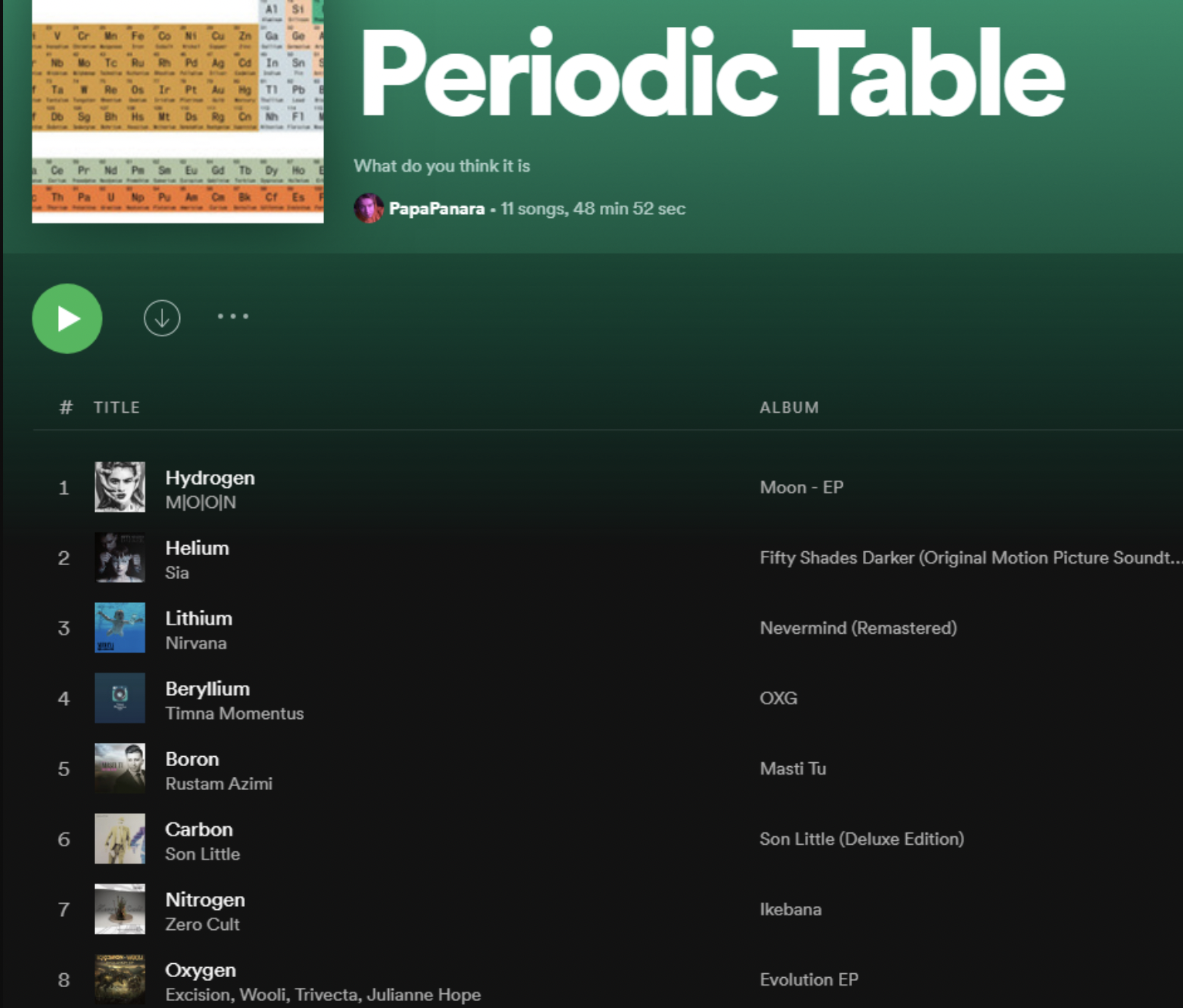 Another variation is the “Russian roulette” format — the same song five times, with the sixth an unexpected novelty, or metaphorical bullet in the chamber. Put the playlist on shuffle and see if you survive. These practically beg to be implemented in a college drinking game. 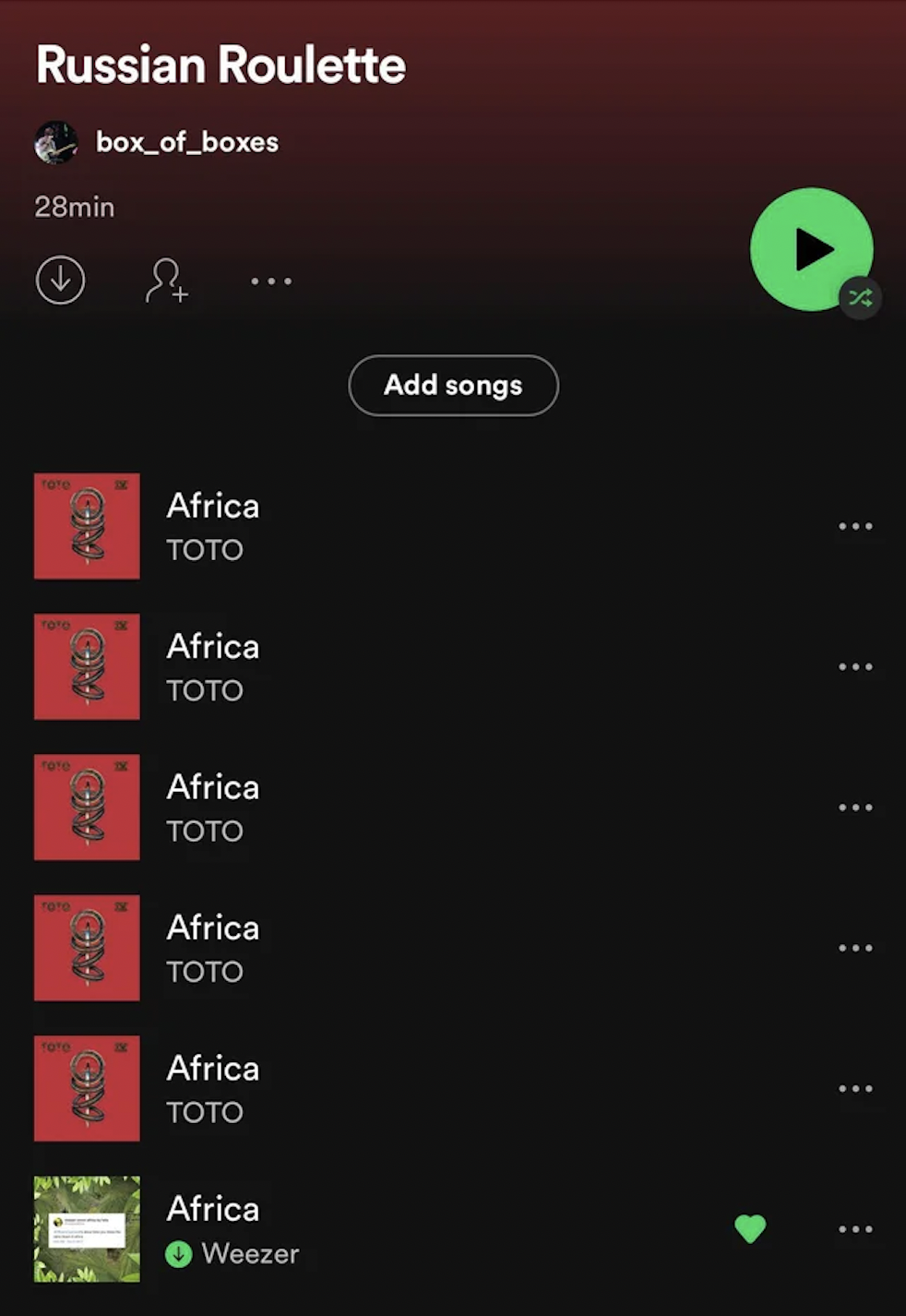 Here’s the Spotify rendering of the legendary “Steamed Hams” scene from The Simpsons, an influential weird playlist dating back to 2017: 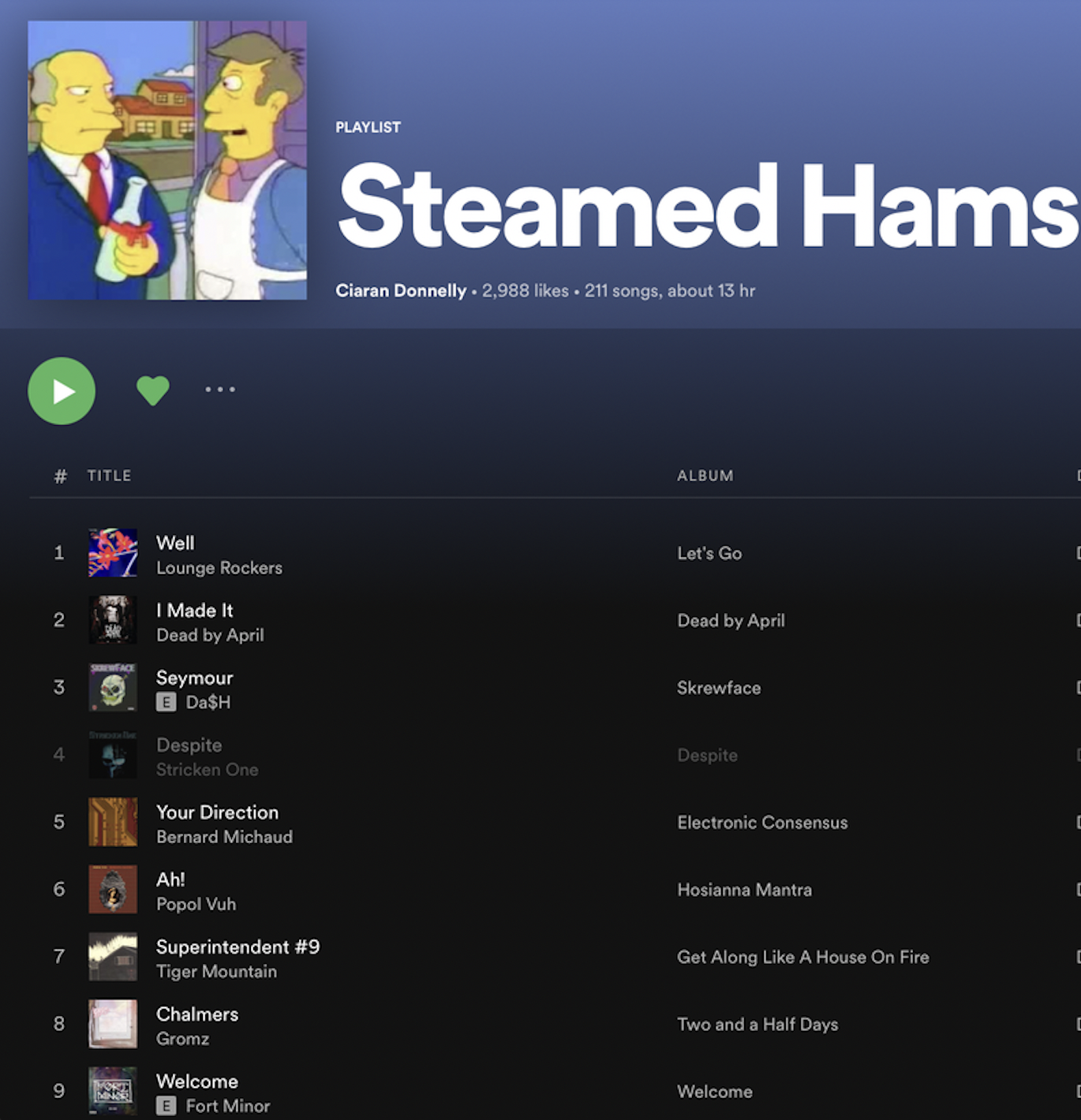 And, of course, a perennial gimmick is the bad sex playlist.

Where do these jokes come from? Perhaps the absurdity of near-constant upgrades to one of the oldest forms of human expression — and the growing awareness of how public your organization and consumption of entertainment is in the streaming era. Spotify will show your friends when you’re binging breakup music or listening to lowbrow “guilty pleasure” tunes. What’s more, its algorithm is tracking your moves and habits, trying to establish a portrait of you as a customer. The weird playlist throws a wrench into that, since it arises not from your listening taste but the intent to baffle and amuse. The playlists actually exist, yet they are arguably “realer” in their documentation as found artifacts, the necessary chaos of a system. 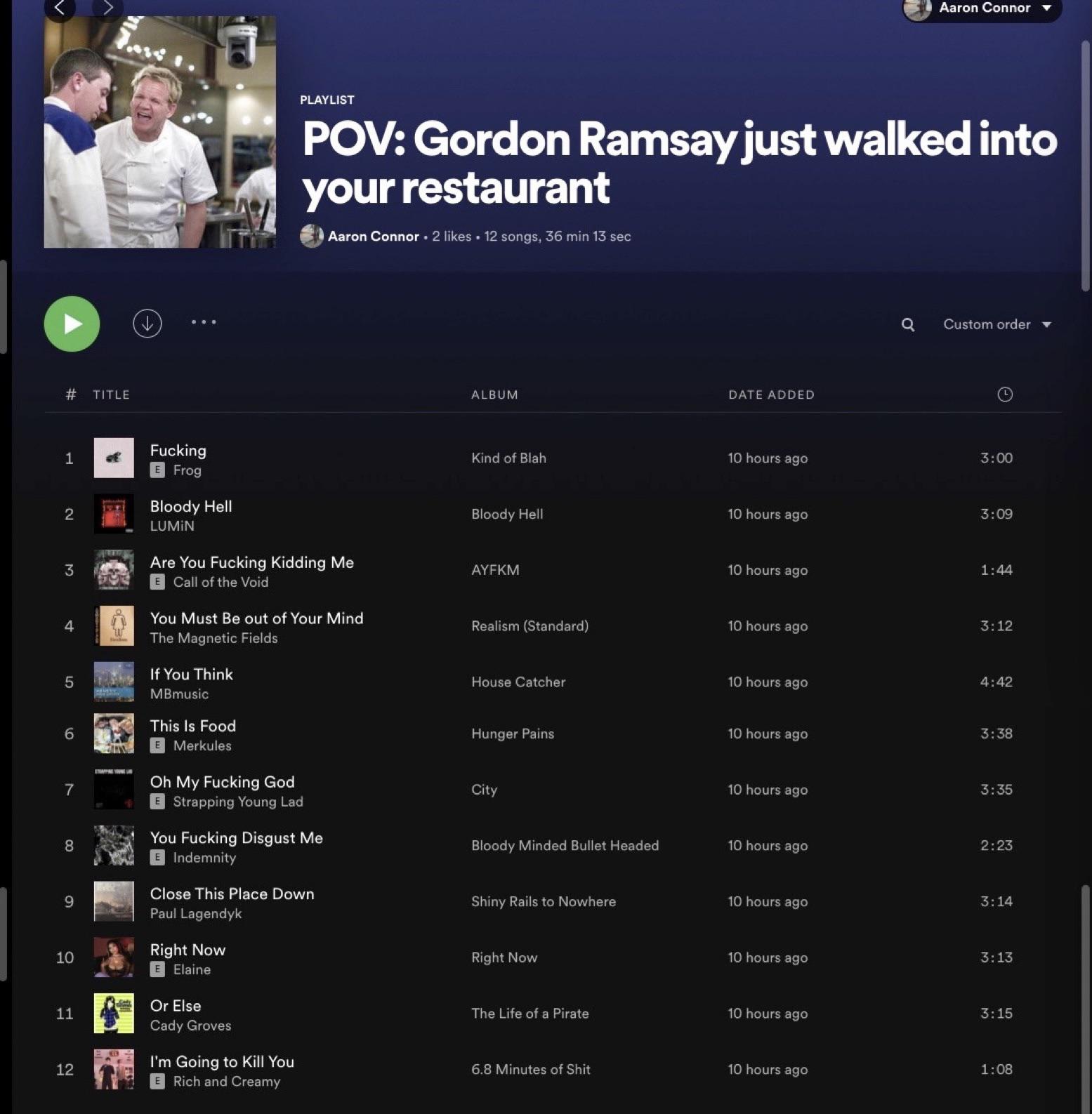 Yep, can’t disrupt an entire industry — and the way its product filters into our lives — without a little disruption in return. If big tech gives us sleek and shiny software, we’re going to shitpost with it somehow. At present, Spotify hosts 4 billion playlists, the vast majority created by users for the expected, “normal” reasons. But slowly and surely, the weirdos are expanding their turf.