What’s it like to gorge on Beyond Burger like it’s a BBQ feast? Don’t say we didn’t warn you.

There’s this false assumption that eating vegetarian means eating healthier, but that’s not always the case. Especially not when Beyond Meat burgers and tacos exist. For a while, faux-meat products were only available in the form of tofu dogs and black-bean burgers — i.e., nothing like actual meat. Today, though, science has finally lived up to its promise of a better future and made fake meat that actually tastes at least something like its fleshier counterpart.

But again, options like Beyond Meat aren’t necessarily healthier than the original, especially when residing on a Carl’s Jr. menu. In our recent ranking of “healthy” fast-food options according to actual healthiness, the Carl’s Jr. Beyond Famous Star ranked second-to-last thanks to its inflammation-causing white bread bun, 700 calories and 1,550 milligrams of sodium.

Sometimes, though, whether vegetarian or omnivore, you just need a fucking burger. Similarly, sometimes you just need a fucking taco. And so, the Beyond Famous Star and the newly available Beyond Taco from Del Taco present viable options to your protein quandary. You’ll still feel like shit afterward, but at least you’ll feel a little better than you would eating beef knowing that the global livestock industry produces more greenhouse-gas emissions than all cars, planes, trains and ships combined. 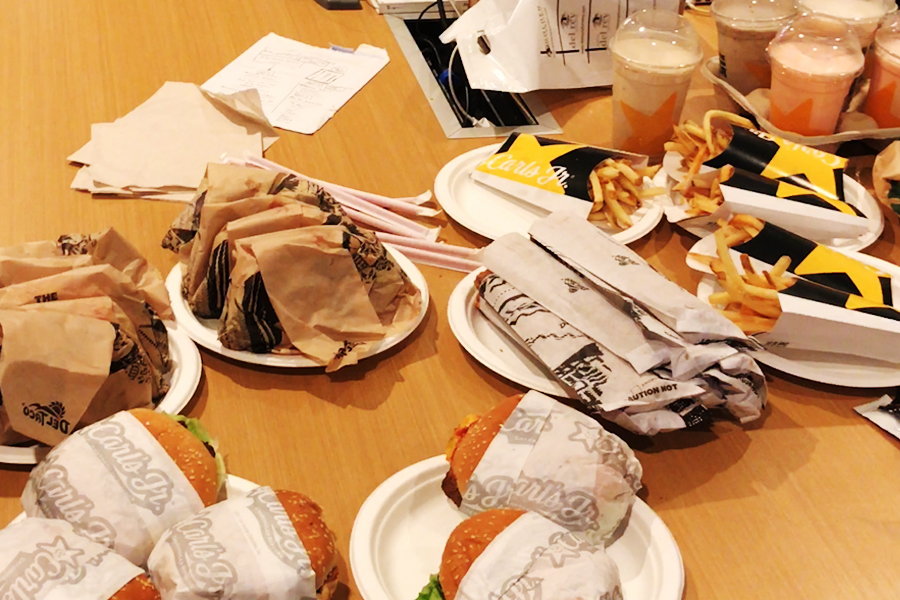 If Not for That Chemical Aftertaste…

As with most things fast food, the “meat” in this case was essentially just a vehicle for sodium, MSG and fat. As such, I found the Beyond Beef® to be pretty indistinguishable from its bovine counterpart (which I suppose is the point). Mayonnaise, cheese and flavored salt atop anything on a white kaiser roll with lettuce and tomato will taste good if you’re hungry. The residual chemical aftertaste of the BB, on the other hand, was a dead giveaway. — C. Brian Smith, Staff Writer

Who Knew Fast-Food Beef Was So Bad?

The main takeaway for me is that fast-food beef is, uh, not very good! It seems like most people can tell the difference between the Beyond Beef and regular-beef products in a side-by-side tasting. But I didn’t find the real beef to be that superior in flavor or texture. Just… different. The texture of the taco meat was more or less identical between the two, but the Beyond was spiced in a way that reminded me of chili — weird, but not unpleasant, especially with some hot sauce. The Carl’s Jr. burgers had a fairly similar flavor, but the texture of the Beyond patty was a little spongier. It mostly all tasted like slightly above-average, cheese-laden fast food, to be honest. I’m more excited to try cooking with some “raw” Beyond Beef at home. — Eddie Kim, Staff Writer

I’m a film critic who makes his living being able to articulate the finer points of cinema, delineating good movies from bad. In just about every other aspect of my life, though, I’m a heathen who has horribly basic taste, which probably explains why I totally flunked our Carl’s Jr./Del Taco taste test. Even for a million dollars, I’m not sure I really could tell you which one had actual meat and which one was Beyond Meat. To me, they all tasted the same, which is what these companies will probably love to hear. On the flip side, I finished the food about 20 minutes ago, and now I want to die. I’m so sleepy and full of self-loathing — even more so than usual.

Since I don’t eat fast food anymore — I ate so much when I was younger — it’s always a bit of a shock to the system when I consume any. But when I do, the old rush comes screaming back. Oh, yessssss, the creamy sauces and fattening cheese. Oh god, oh god, oh god, that yummy, yummy meat. I ate both the Famous Star and the regular Del Taco taco — one real meat, one fake meat of each — and I realized that you don’t pick out specific tastes or flavors. It’s just a cacophony of mouth pleasures that you know are high in salt and sadness. It tastes so good that you know it’s terrible for you — and that you will feel so, so bad later.

If Beyond Meat really is better for you — and there’s some debate about that — then I guess it’s encouraging that I barely noticed any difference. I suppose I could eat more fake meat and be a little healthier. But there’s something more worrying about the results of the MEL taste test. Sure, the fake meat tasted as good as the real thing — but sorry, it’s all terrible for you. Being shot in the head or jumping out a window will bring about the same result. —Tim Grierson, Contributing Editor 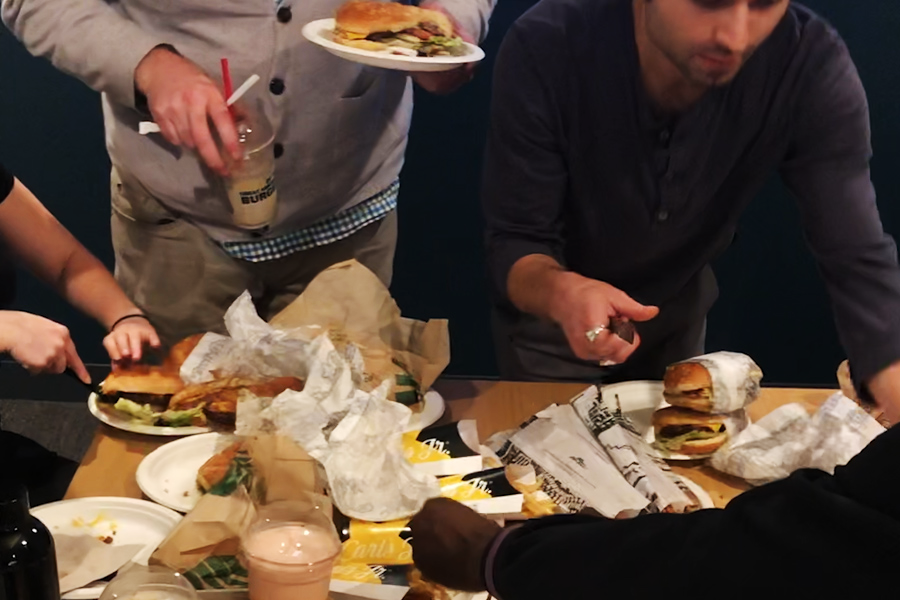 I want it to be known that I only ate the Beyond burgers. I haven’t eaten beef since 2Pac died. From what I do remember of the taste of beef is that this Carl’s Jr. supplement was fuego. It tasted closer to a burger than any tofu or veggie patty I’ve ever had. The condiments and sesame-seed bun also had me feeling a-okay. Unfortunately, I can’t say the same for the taco. The first bite was fuego, but bites two through seven were basura. — Tarik Jackson, Story Producer

It’s the Almond Milk of Burgers

Cheeseburgers are sacred. The texture of ground meat combined with melted cheese and some mayo-ketchup compilation is pure mouth joy. As such, I’ve been reluctant to give lab-tested faux meats a fair shot. Because when I want a cheeseburger, I want pulverized cow flesh. But after tasting Beyond meat, I’m surprised to admit that it’s perfectly fine, like almond milk or Diet Coke. All of which is to say that I’d never consider ordering Beyond meat if given the choice between real meat and the fake stuff, but sure, I’ll take a bite.

As for the “Beyond meat tacos versus Beyond burgers,” well, the tacos are closer to a “never-again” promise than the burgers. In other words, if I’m going to risk an all-too-familiar fast-food-induced sinking feeling, I’m going to do so with the real shitty shit as opposed to the “Beyond” shitty shit. — Andrew Fiouzi, Staff Writer

Regardless if it’s made out of meat or not, I still feel like shit. I still have the same loathing and regret I would from a regular burger (or taco). For my money then, the best part was the churros. — Sam Dworkin, Senior Designer 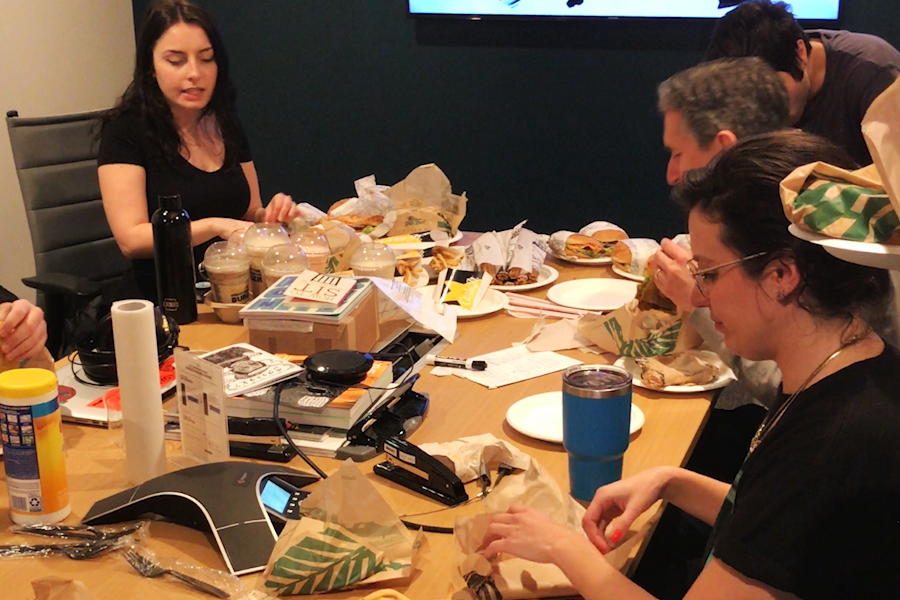 You Can’t Outrun(s) Fast Food (Whatever It Consists Of)

I’m a huge fan of Beyond and wasn’t disappointed. I could correctly identify which was which but only because I knew going into it that one was fake meat. If I was unsuspecting handed this at someone’s house, I’d never know the difference. But regardless, I’m echoing Sam’s sentiments: I still felt like shit afterward — probably because even fake meat can’t spare one from the effects of fast food. — Alana Hope Levinson, Deputy Editor

In the End, Maybe It’s All Irrelevant Anyway?

To paraphrase Keyser Söze (problematic, I know), “The greatest trick the fast-food industry ever pulled was convincing the world that it needs its kind of sustenance, no matter the dietary restrictions.” I’m gonna chalk that up to all the bleached white flour therein, which seemingly alters our brain chemistry into making every bad decision imaginable — namely stopping at the Carl’s Jr. or Del Taco drive-thru whenever we’re super drunk (or super stressed). That said, it’s not without its powers. For example, you can put whatever “healthy” or “vegetarian” shit you want on a Carl’s Jr. burger, and the taste (and frankly, nutritional components) are more or less gonna consist of the same faux grill marks and smoke you get from whatever low-rent meat that normally sits between those abhorrent white flour buns.

That was certainly the case with Carl’s Jr. Beyond Famous Star. I, for one, couldn’t discern any real difference between the fake shit (I’m sorry, “plant-based patty”) and the more traditional fake shit (I’m sorry, a patty of just enough sawdust and animal products that the USDA could consider it “meat”). Sure, that could be my unsophisticated palate. But given my working-class background, my palate might only be unsophisticated because it’s been overridden by such low-rent alchemy/marketing for generations. Either way, it was fucking delicious! And more importantly for the task at hand, indistinguishable from the real thing.

Sadly, the same can’t be said for Del Taco’s spin on the Beyond Meat Taco. But as my colleague Eddie Kim astutely pointed out, that likely had way more to do with the (beyond) amount of cumin used in the seasoning than it did the Beyond beef itself. So that’s a win… right? — Josh Schollmeyer, Founder / Editor-in-Chief