Despite all the pro-Trump memes it inspired, the classic tabletop game resonates as a searing critique of authoritarian politics

Shortly after President Donald Trump’s inauguration in 2017, 34-year-old Alfie Meyers started noticing a strange meme circulating on Facebook. It featured Trump in a suit of golden armor, stepping on a small mountain of crushed skulls and holding a jewel-encrusted gold sword. The meme was something of a Rorschach test: Trump detractors saw the president’s endless desire for power and control, while the MAGA crowd saw Trump forcibly “draining the swamp.”

Meyers, though, recognized it as something else entirely: a reference to the God Emperor of Mankind from the relatively obscure British tabletop game Warhammer 40,000. 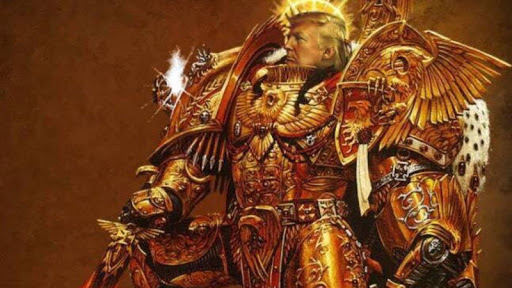 In Warhammer, players build and paint their own figurines and stage campaigns set in a fictional dystopia. It’s a future where scientific and social progress has ceased, and human civilization (known as the Imperium of Mankind) is close to collapse. There’s no such thing as benevolence in the Warhammer universe; there are only demons, evil gods and the cults dedicated to them. The all-powerful God Emperor of Mankind commands a near-fascist army (called the Space Marines) to enforce his will. Fascism is an inescapable theme in Warhammer: A considerable amount of the game involves armies with authoritarian tendencies enforcing their will — killing, capturing and enslaving their opponents and dissenters.

Perhaps it should come as no surprise that the fascist-leaning right has embraced the game’s iconography. According to Know Your Meme, the first sighting of Trump as God Emperor was in 2015, when the meme was posted on the 4chan message board /pol/. As support for Trump spread in chan culture, so too did the use of the “God Emperor” term among the online alt-right, spread by high-profile figures like Milo Yiannopoulos.

What’s more surprising, given what the game spawned, is that it’s amassed a thriving fandom of young leftists who see Warhammer as a great satire of the authoritarian right — and thus more relevant than ever.

Meyers is one of a growing number of leftist millennial men active in tabletop gaming. In the U.K., for example, the group Hackney Area Tabletop Enthusiasts — guys who gather and play Warhammer and Dungeons & Dragons — is largely made up of Labour Party supporters. Meanwhile, podcasts like Sigmarxism (with the tagline “Nationalize Games Workshop,” referring to Warhammer‘s manufacturer) analyze Warhammer 40,000 through a Marxist lens, examining everything from the community aspect of painting figurines to the ways in which Games Workshop needs to improve vis-à-vis inclusivity and accessibility for minority groups.

Leftist fans point out that Warhammer has roots in the anarcho-punk scene of ’80s Britain. It was was developed in 1983 in Birmingham, England, a city that was deeply affected by the Margaret Thatcher government, which enacted policies that shut down its industrial-based economy and weakened its trade unions.

This context is crucial to understanding the game, argues Kevin Austin, 38, who’s from Lincoln, near Birmingham. “The creators certainly weren’t right-wing. So much of Warhammer is supposed to be a satire of fascism.” But as Warhammer has gotten bigger, he says, “more people with right-wing politics project it onto the game.”

“When you completely disengage your critical thinking, it becomes very easy to embrace Warhammer 40K’s fascist architecture,” wrote James McConnaughy for the Mary Sue in 2016. “Of course fascism is good: The humans in 40K are fascists, and they’re the good guys because they’re humans — ergo, their fascism must be good. It never crosses their minds that the humans aren’t necessarily the good guys.” 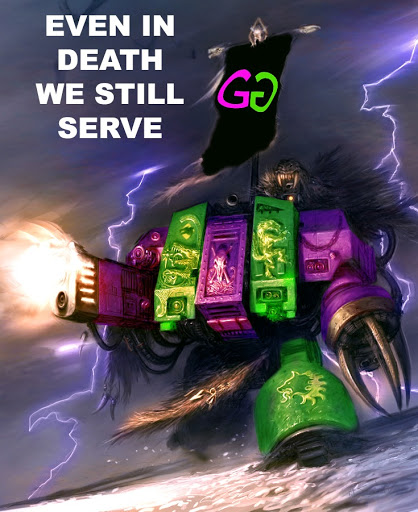 But the game makes explicit the awful reality of fascist government. “Players ignore things like [the facts that] the government has unrestricted power, the citizens next to no rights, military service is near-universal and compulsory and multiple branches of government and military have no accountability,” Michael Chisholm wrote on Medium in 2017. “To top it all off, the God Emperor sits passive in his golden throne, being kept alive so that his empire could live on, but his tortured soul has to watch as his ideas were perverted into something he never wanted. It is things like xenophobia or sexism that end up being embraced, as the true messages are passed over.”

“I wouldn’t say Warhammer is a left-wing or a right-wing game,” says Bryan Moore, 30, who supported Bernie Sanders for president in 2016. “I think there are people with right-leaning politics who spend a lot of time online and look at Warhammer art, which is mainly muscular guys in battle suits and large armor fighting. There are also religious and cultural overtones in the lore. Like with some art, you see the Crucifix or Latin insignia on weapons. So for those people, this isn’t a fantasy world; it’s an alternate world where, even if it’s supposed to be a [dystopia], it’s still one where they can live out their traditional soldier fantasy.”

On the website TradYouth, which advocates for the enforcement of “traditional Western values,” an essay on the popularity of Warhammer 40,000 suggests that some players see the game as a way to live out a “traditional Christian lifestyle”: “The Imperium does not negotiate and does not compromise its religious or its social values to those who wish to destroy it. In the age of outright heresy being found in most mainstream churches, it is no wonder why many young people see the expression ‘Imperial Cult’ as being a desirable vision for how the religious body of the Christian Faith should act.”

Will the neo-Gamergate culture war absorb the Warhammer scene, too? Players tell me that while tabletop games haven’t been as big of a cultural-political lightning rod as video games are, the underlying tones are becoming louder. Still, there’s one big difference that might insulate the tabletop world a little longer: It’s IRL.

Alex Hern, who covers gaming for the Guardian, tells me that while trolls have certainly infested video games, they’ve been less able to dominate Warhammer and other tabletop games (regardless of the God Emperor memes). Video games are more isolating by nature, he posits; generally, “you play physically by yourself and your experience is basically determined by people you don’t know.” When there’s an in-person social element, however, it changes the dynamic. “You have a lot more control over what kind of game you play,” Hern says. “It’s less to do with the politics of the game, or what kind of social politics they believe in. With Warhammer, when you’re actually playing it, you’re more concerned with the other players around the table.”