Will Vin Sant Leave You Jacked or Scammed?

Ads starring the ubiquitous ab influencer are everywhere you turn online. But a growing number of fitness experts — and consumers — say that what he has to offer is rather weak.

“I’ve been eating healthy for years,” Vince, aka Vin Sant, brags in the YouTube ad for his workout program V Shred. “And I was eating these foods that people say are healthy but was actually killing my body’s number one fat-burning and muscle-building hormone. And when I stopped eating these, my results went through the roof.”

He comes at you armed with claims of new scientific breakthroughs that only he and a small number of nutrition researchers know about. “So according to studies, there’s one food that can raise your overall testosterone levels by 52 percent, and overall sexual health by 78 percent,” he promises. “Can you guess what it is? I’m gonna say probably not. Until a couple of years ago, I had never heard of this food. It’s got a super weird name. But what’s cool is that you can literally start eating this one food today and to reclaim your masculinity, to get higher energy levels, raise your libido, start burning fat again, start building real muscle again and actually start feeling good.”

The thing is, to find out the identity of that one food, you’ve got to click the “‘learn more’ button below, and check it out, before you miss out” on his “free presentation that tells you what this food is, and why you need to stop eating it [presumably he meant start, sic throughout on all direct quotes from the V Shred ads], and a 30-second morning routine that you can start doing to boost this hormone and make getting in shape easy.”

Welcome to the world of V Shred marketing.

“It’s not even clear what V Shred is. I think you stumbled across one of the emptiest fitness influencer accounts,” Oliver Lee Bateman, MEL’s resident fitness buff, tells me. “He seems to be selling a few powders and a shaker bottle. I hesitate to ever use the word ‘grift’ on anything, but this is clearly an operation that’s set up to do nothing. It’s mostly, ‘If you’ve only ever had one hamburger, you might think it’s the best hamburger.’ If you’ve only ever seen one of these guys, you might think he’s got all the answers.”

I originally asked Bateman to take a look at not only V Shred, but its supplements off-shoot, SCULPTnation, too. But we were both drawn into a confusing labyrinth of fitness programs. “There are so many websites,” Bateman marvels. “There are so many things that connect. It’s like you just took a guy from the club who had a dream, and you gave him a lot of credit cards to rack up financing to start all this, and instead of creating anything substantive, he made a maze.”

The man himself — Vin Sant — was raised in Ohio, which is seemingly core to who he is, as you can find a tattoo of his home state on the inside of his bicep. He started out as a small-town male model appearing in local ads before graduating to working a show for Abercrombie & Fitch in Japan and having his face featured in Golf Digest and naked chest on the homepage of Tumblr. 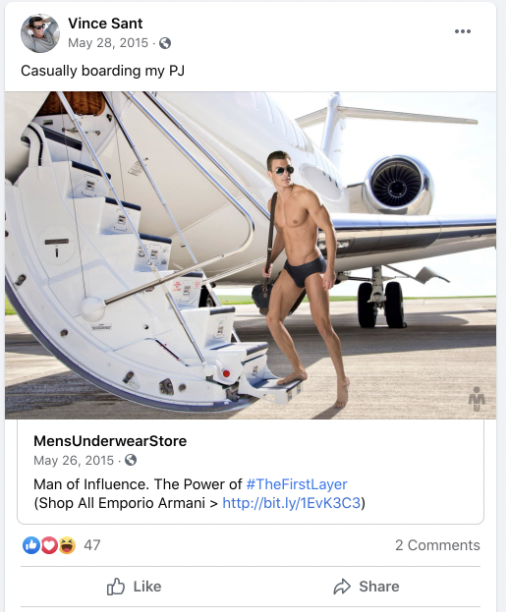 At some point along the way, he befriended a trio of men who would rally around his naked torso and bring him into the fitness game. Here’s how Roger Crandall, SCULPTnation’s co-founder and chief technology officer, tells the V Shred origin story in an Instagram post: 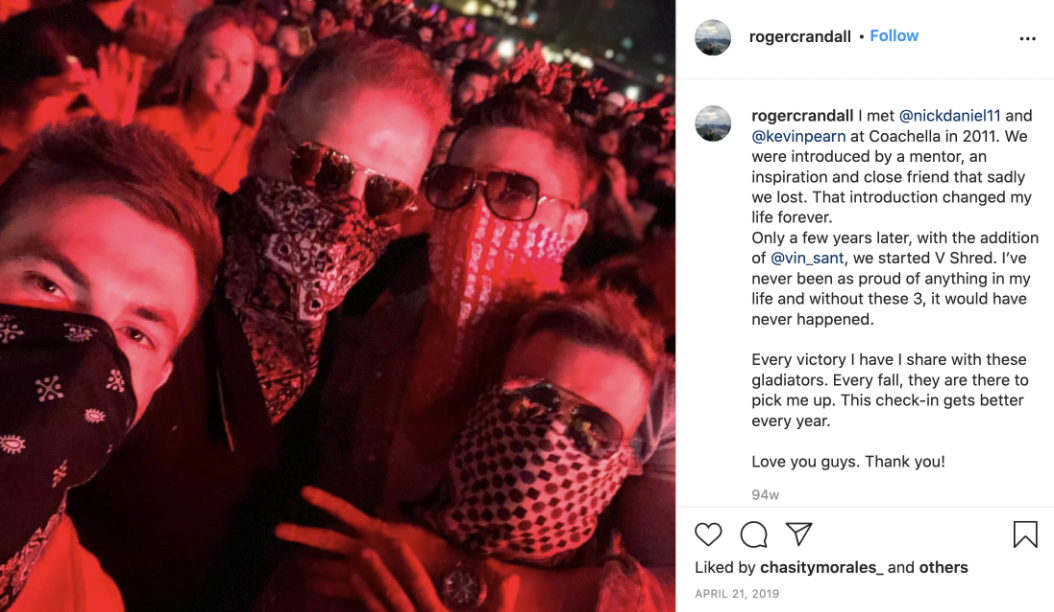 As for the substance of what VinSant and his bros are selling, bodybuilder Geoffrey Verity Schofield, who operates his own YouTube fitness channel, tried one of Vin Sant’s workouts. The title of the resulting vid says it all: “I Bought a V Shred Program So You Don’t Have To! (It Was Cringy Hot Garbage),” a sentiment he was happy to reiterate to me over email.

“My fitness bullshit detector is a finely-tuned machine at this point,” he writes. “A lot of the claims that [Vin Sant] made were simply either lies, mistruths, half-truths, embellishments or unsupported by any evidence — scientific or otherwise. The sad truth is that someone promising rapid results will sell more product, even if their claims are utterly unfounded. The average person just buys based on emotion, not actual information. If they put a handsome guy like Vin Sant in the advertisement and promise massive results, people will buy, even if the actual program is poorly put together.”

“I’d say at least 40 percent of YouTube ads are scams,” Schofield continues. “Every vertical has them — finance, fitness, fashion. Everyone positions themselves as a guru, with the multi-million dollar online revenue ‘screenshots’ to back it up, or the fake investment portfolio that’s up 600 percent this year, or the transformation photos that are mostly Photoshop. Results that you can have as well, if you just buy their course, after they reel you in with their free online training. It’s rampant. It’s toxic. And it’s profitable. I highly suggest that no one click on a YouTube ad, ever. They’re targeting the uninformed, the misinformed, the gullible, the stupid, the ‘I want it now’ crowd. Nothing is easy in life, and the convenient, simple solutions they offer are just a way to separate you from your money.”

The other big problem fitness personalities such as Schofield have with Vin Sant and V Shred is that they seem to liberally borrow concepts from other creators — in this case, namely, Jeff Cavaliere, the former head physical therapist and assistant strength coach for the New York Mets. YouTuber Infinite Elgintensity credits his fellow YouTuber Alan Roberts for first pointing this out. Roberts is an intense man who likes to turn a colorful phrase and loves to go ham on Vin Sant. He’s made a whole series of videos that call out V Shred as a scam. His lead has since been followed by many others — e.g., Greg Doucette (who sounds like Gilbert Gottfried if he was a gym bro) and the eruditely frustrated Brit Simon Miller.

All of this, of course, eventually caught the attention of Cavaliere, who chose to roast Vin Sant in a YouTube strength-training vid. In a skit at the start, Cavaliere interrupts a Vin Sant stand-in who’s doing a workout badly and incorrectly. Cavaliere tells his imitator, “I’ll tell you what, dude, you let me come up with the science, you keep looking pretty and just keep copying what I do.”

What really caught Bateman’s eye as we perused the SCULPTnation website together is something he’s seen many times before — the supplement hustle. In his countless videos and websites, Vin Sant loves to hype the power of dietary supplements. To him, they can trick your body into burning fat more efficiently and building muscle more quickly. “There are manufacturing companies — either domestic or foreign — that are basically like formularies,” Bateman explains. “You call them up, tell them how much you need, give them the picture of your logo, and they’ll make the whole package for you.”

“What Vin Sant is actually selling is turmeric,” Bateman continues with an amused laugh (based on the supplement we were reviewing on the SCULPTnation site, it seems to be the main active ingredient). “I guess it has some benefits. Turmeric is mainly used in Indian cooking and stuff. You could put it on your curry. But that’s the main product here — turmeric black. He’s saying that it’s scientifically-backed. That’s one of those wiggle words — like a promise to ‘enhance fat burn.’ None of these claims mean anything. He’s also selling matcha, which is just green tea.”

This isn’t just Bateman’s opinion either. Over at Shredded Sports Science, host James Linker explained in no uncertain terms to his 280,000 subscribers that he strongly believed that Vin Sant and his SCULPTnation supplements shouldn’t be trusted. Meanwhile, science-minded fitness influencer Sean Nalewanyj also warned his 216,000 subscribers: “At the end of the day, V Shred is simply a marketer rather than a fitness expert, and his content should be viewed with that in mind.”

Actual consumer reviews are no kinder. Many, in fact, have taken to ReportScam.com, and the review site TrustPilot.com to document what they say has happened when they gave their money to Vin Sant and SCULPTnation. (The V Shred, LLC Better Business complaints page is no better.) 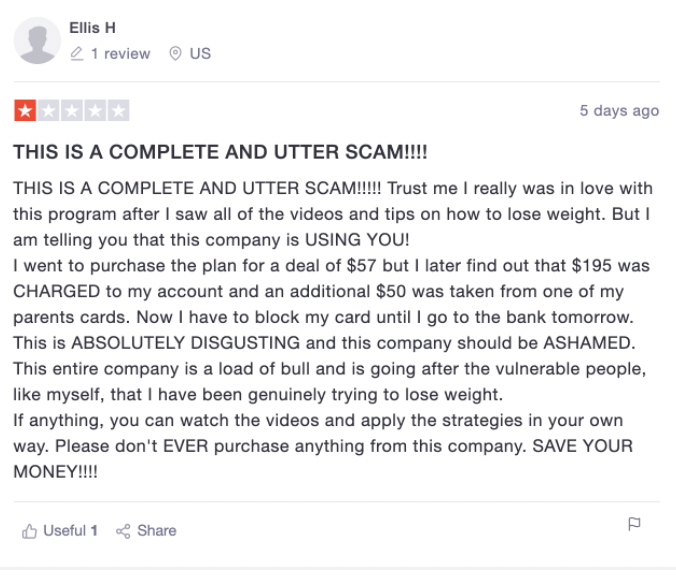 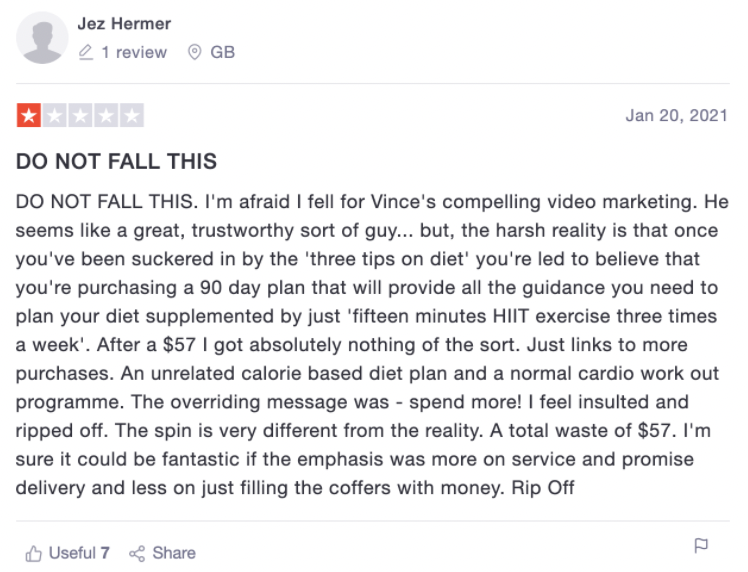 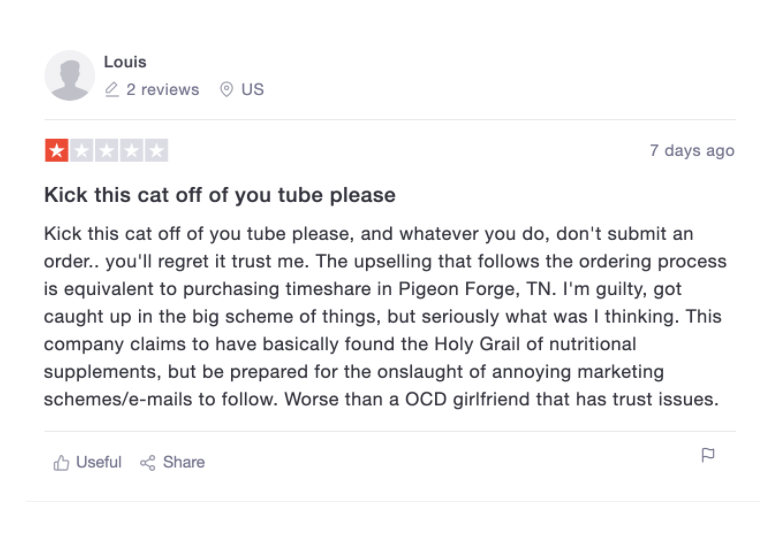 It took YouTube a while to get back to me when I asked them for a comment about Vin Sant, VShred and the numerous complaints and criticisms against V Shred, LLC. But when they did, they maintained, “We looked into this channel and the examples you provided and did not find violations of YouTube’s Community Guidelines or advertising policies.” They also directed me to the About section of their Ads Policies, which clearly states, “We have strict ad policies designed to create a safe user experience. Ads that mislead users about the services or products promoted are a violation of those policies.”

Earlier this year, I reached out to Vin Sant and SCULPTnation for an interview on multiple occasions via the info available on the Contact section of the SCULPTnation website, as well via his personal account at VShred. This is the response I received: 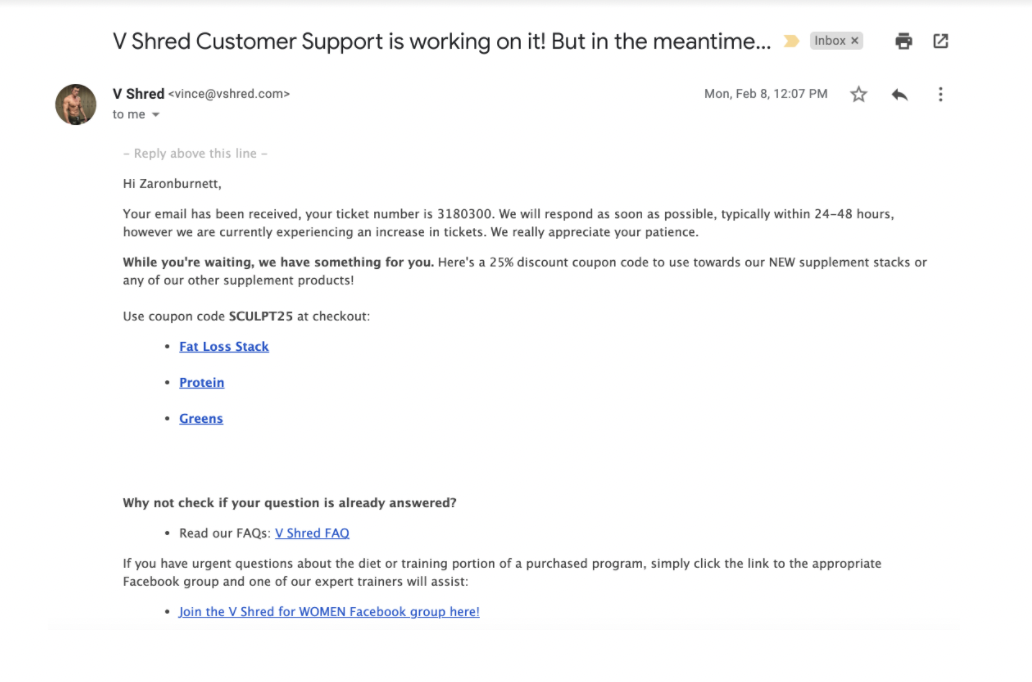 Two days later, I was asked to review my customer-service experience (my interview request went unaddressed): 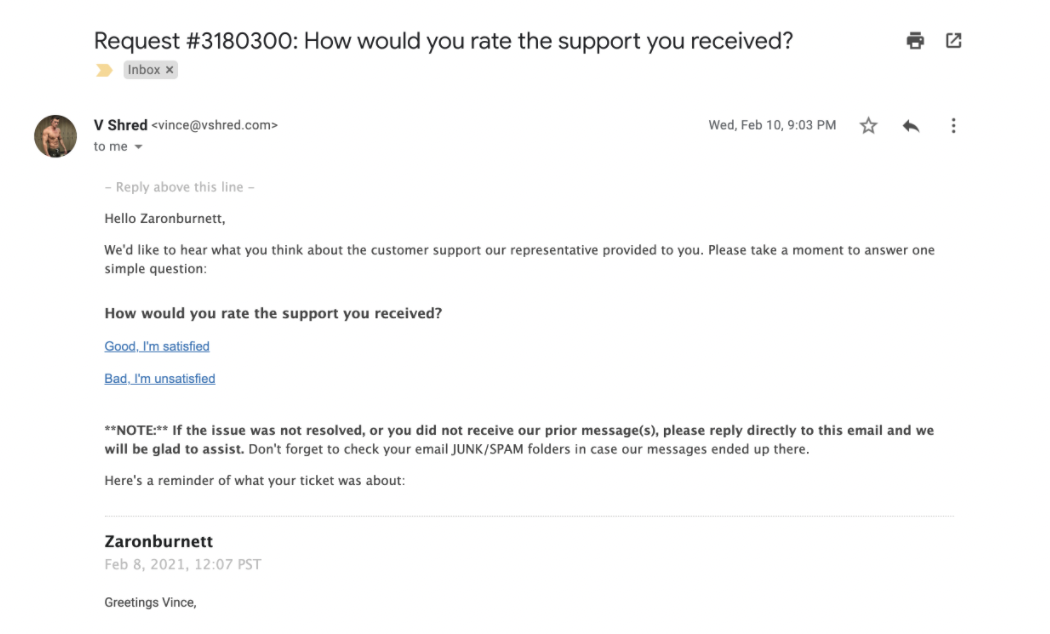 That’s when I also learned that I’d been enrolled in their customer database. They even included a coupon for me to buy SCULPTnation supplements at a 25-percent discount. In the end, it was probably comment enough. 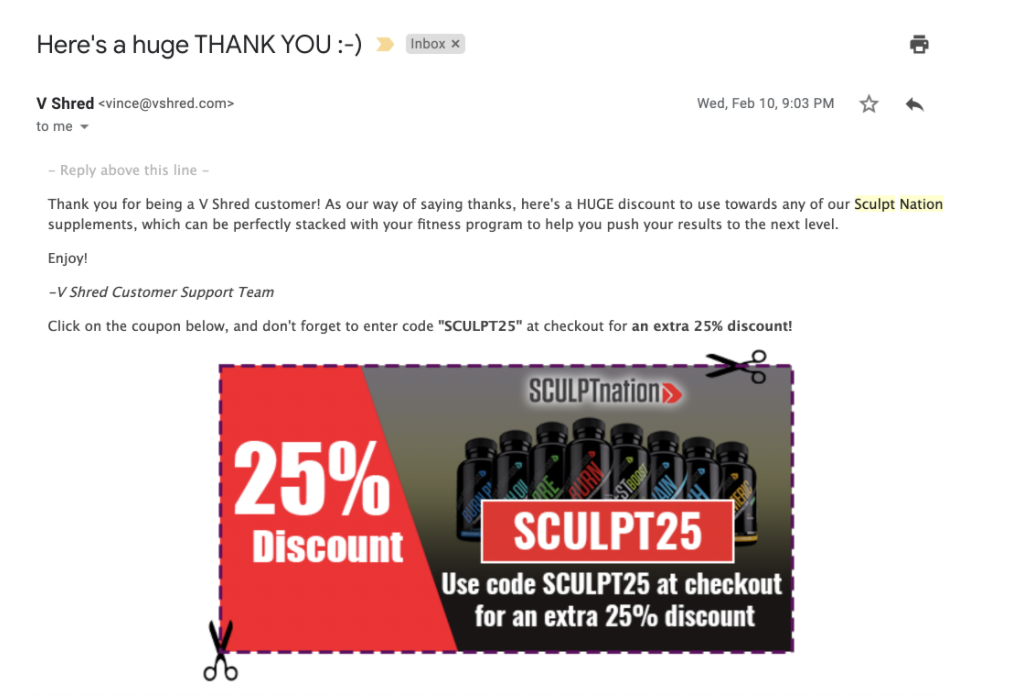