What Would Happen if You Were Filled With Unpopped Popcorn When You Got Cremated?

If I eat a bunch of popcorn seeds before I die, will my corpse explode into a buttery flesh sack of salty goodness? We fact-checked this viral meme and learned a lot about death

Three months ago, in front of 150 of our closest friends and family, I vowed to my bride-to-be that when I die, she’ll be able to reflect and say that I made her life a little bit happier and a little bit easier. I also asked that she load my dead body onto a trebuchet and launch it into the South Pacific.

Admittedly, it was a silly way to end my wedding vows, but I’m also not the only millennial thinking ahead. Last week, Vox reported that unlike any generation before us, we Gen Y kids are actively planning our funerals. For one reason or another, we love to think about dying (maybe because we allegedly kill so much stuff?), as evidenced by the fact that stumbling across memes about death is nearly as inevitable as death itself. “These are really encouraging times for our industry,” says Jeff Jorgenson, managing owner of Clarity Funerals & Cremation in California. “Or at least those of us on [the cremation] side of things. The traditional funeral homes are somewhat less enthusiastic.”

Now, I should say that I was joking about having my remains fired into vast, highly polluted waters. And while those tree-pods are cool, they’re also pretty self-indulgent. Maybe, then, I’ll just get myself mulched up. In any event, I’m keeping my options open, which is why this meme recently caught my attention: 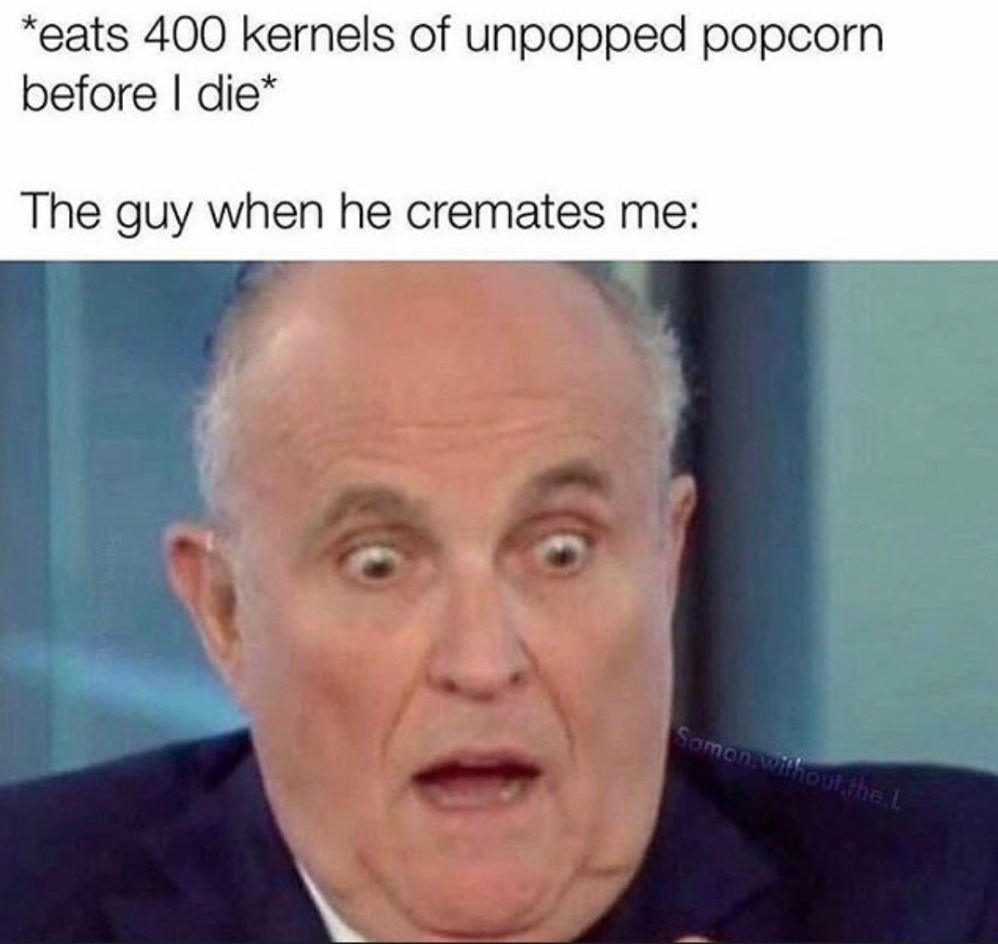 Would he look like that, though? I mean, not like Rudy Giuliani, obviously. But like a guy who just saw a dead corpse start popping as if it were stovetop Jiffy Pop. That is, what would happen, if upon my deathbed, I did indeed ingest 400 kernels of unpopped popcorn and then had my wife send me off to the crematorium? Would I pop, even a little?

Unfortunately, Jorgenson says we should temper our expectations. “The popcorn thing comes around about once a year, and I’ve never really come up with a great way to dismiss it,” he tells me, adding that he’s “a funeral expert, not a popcorn expert.”

Sounds like we could use a popcorn expert. How about Emmanuel Virot, a Harvard postdoctoral fellow who’s arguably the world’s leading expert on popcorn science? His answer left me even more curious. “I think it will just burn,” he tells MEL. “The hermetic hull would likely get damaged before that the pressure inside the kernel builds up. The best would be to try, of course!”

All right. What would happen if we did? Jorgenson begins with one of humanity’s favorite philosophical quandaries: If a tree falls in the woods, does it make a sound? The same applies to unpopped popcorn kernels lingering in any deceased stomach. “These machines are loud and closed up, so no matter what happened to the popcorn, you wouldn’t know,” he explains. “Not to mention, there would be no evidence of popcorn once the cremation was complete.”

There’s also the fact that in order to pop to its fullest potential, popcorn requires a perfect balance of time, temperature and pressure. Sure, there’s a fair amount of heat-transfer math I could get into — as well as how stomach acid might come into play — but the result is always the same. “The cremation chamber operates around 1,800 to 1,900 degrees, which is way above the range in which kernels will pop,” Jorgenson explains. And so, along with our teeth, head, body and balls, the kernels would burn right up into carbon.

But because Jorgenson gets presented with this hypothetical a lot, he offers another argument as well. “Change the guy swallowing popcorn to stuffing a turkey with popcorn, stitching it shut and cooking it at 400 degrees — a lower temperature in line with what’s needed to pop popcorn,” he says. “Even then, the amount of force in the explosion from the popcorn would be insufficient to have any recognizable change on the outside.”

Well, what if you filled my entire cadaver with popcorn kernels, instead of just my tum? Jorgenson can only speak for chicken, and the chance that the bird’s skin would rupture would still be low, he says, because popcorn doesn’t all pop at once. “So yeah,” Jorgenson concludes, “it’s a cute meme, but wholly disconnected from reality.”

Disconnected from reality, yes. But Jorgenson believes it is a good thing we’re having the exploding-popcorn-corpse conversation at all. “We’re long overdue for an open discussion about what happens at the end of life,” Jorgenson tells me. “So I’m absolutely thrilled that it’s happening more, whatever the context.”