Trump Is Giving a Master Class in Tweeting Through It

In the end, posting is all the president really cares about

When the historians have their say, it will be a story of tweets.

The Trump presidency is inextricable from his gross online persona. Twitter is the platform that made him feel as if he were more than a rich guy with his name on buildings — it told him he also had the ear of the people. That he was not just someone to be envied or admired, but listened to.

To mangle Adam Serwer’s powerful phrase in The Atlantic for my own dumb purpose: The tweets are the point. They give him a sense of control and power too often subverted within the White House by his cabinet and other subordinates, who have to belabor again and again why one of his ideas is illegal, another prohibitively expensive, and the third outright impossible to realize. It is for this reason (in addition to his cowardice) that he fires so many people on Twitter, rather than face-to-face; he enjoys that an impulsive tweet is what makes it so. Having discovered the limits of executive orders, this immediacy of effect — like pardoning an unrepentant abuser of human rights — was a natural high. Twitter is the mind palace where he dictates reality.

As such, you could mainly ignore his posts, knowing they were fabulist in the extreme, with very infrequent bearing on the course of the nation. Indeed, few people actually read them; the replies are reliably clogged with the same handful of MAGA and Resistance spammers, who haven’t achieved a relevant thought in years. An odd misspelling, metaphor or bit of syntax is typically of greater interest than whatever he’s trying to impart through the cheesecloth of accelerating senility. But what happens when not even Twitter, his lone safe space and last remaining pleasure, is immune to the gravity of collapse? When impeachment is gathering steam, the leaks and subpoenas are piling up, the polling is abysmal, and as never before, the president’s social media account can be scrutinized for evidence of open, corrupt conspiracy?

“Tweeting through it” is a defensive strategy that, although well-established in the echelon of the terminally internet-poisoned, has no record of working in any instance. Ever. Just as someone flailing in water will drown all the quicker, he who tweets through a massive reckoning can only add to his injury. So why does anyone do it? Because, as we’re seeing with Trump, Twitter was what got them into the mess — therefore, they think, it should get them out. A reasonable person having a breakdown may exhibit the self-awareness to opt for radio silence over the duration, but not a person addicted to the rush of online celebrity. They, on the contrary, are eager to fight the accusations, tell their side of the story and lash out at the enemies amassed against them. Obviously caught or cornered, they wrestle in vain for the upper hand. It’s Rudy Giuliani continuing to appear on cable news and text incoherently with reporters, or Alan Dershowitz — pal of sex trafficker Jeffrey Epstein — arguing for a lower age of consent.

The order of magnitude that separates these freakouts from the tweeting-through-it of a micro-famous personality is significant. While a devoted handful of gawkers followed as Instagram influencer Caroline Calloway posted prolifically in the wake of a tell-all article by her former friend and ghostwriter, a decent portion of America has now watched Giuliani sputter his hostile desperation on live TV. Trump’s implosion, of course, is happening on a still greater scale, with another important wrinkle: The president has always been tweeting through it. From the start, this was his solitary affect. All hysteria and victimhood and shrieking offense, all the time. The staggering volume of tweets. The runaway momentum. The belief that he could bend our understanding of the world around his posts, or use them as a force field to lock out dissent.

He has set himself an insurmountable challenge not only in being the first president to tweet through what may well be his political demise (and the first to tweet through a personal unraveling before an audience this huge), but in seeking to escalate his shitposts after hitting an upper limit long ago. To tweet through it is to become more extreme, reckless, paranoid, unhinged and insulting — for Trump, that would mean turning up an amplifier already juiced to 11. Somehow, he has almost managed it, with brazen talk of a “coup” and a “civil war,” and the push into a new frontier of executive profanity. The question now is whether he can keep it going. For once you’ve decided the way out is through, you cannot rest a single moment. If it were anyone else, anyone we wanted to protect or save, we might offer a gentle reminder: 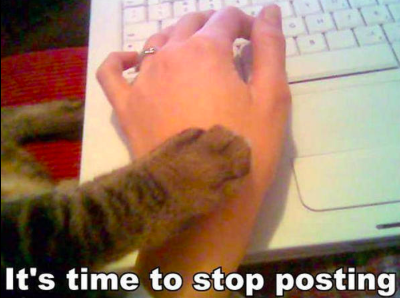 But Trump? Forget it. He won’t listen. He’s made his choice. He’ll go on digging that stupid hole until it’s a wet and fathomless grave. And we are going to watch him die — a man alone with his posts.