But the fun we had along the way was much more meaningful than the slobbery, about-to-burst can he eventually delivered

Allow me to introduce my beloved companion, Tucker, a warmhearted, affectionate pit bull who weighs about 80 pounds and is coming up on his fourth birthday. He drags me around on walks, can finish an entire bowl of food in less than a minute and has successfully overcome a pattern of chewing on literally everything while his parents are away (which once resulted in him dismembering a whole freaking couch). Behold him in all of his glory: 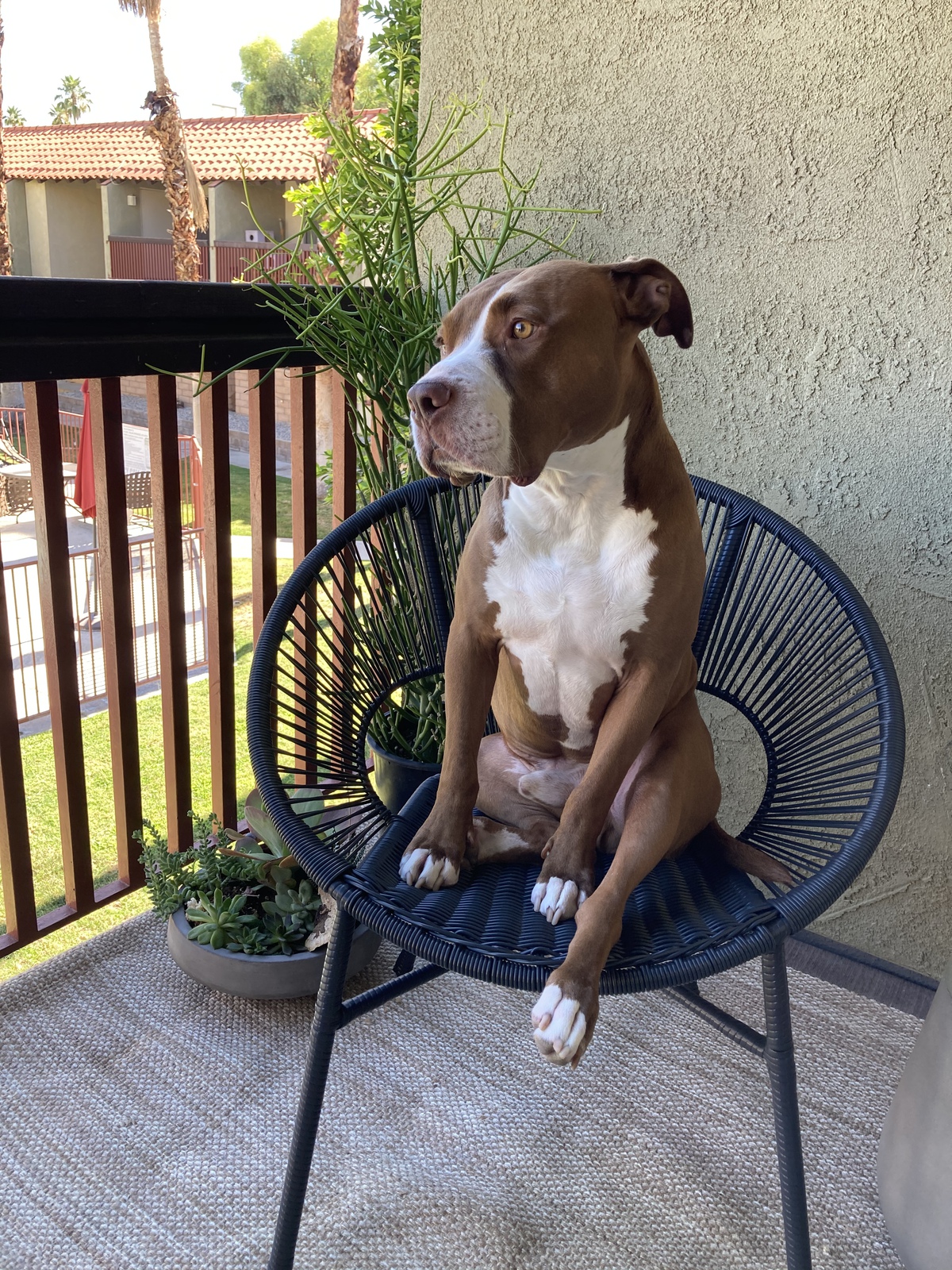 My girlfriend and I constantly use reward-based training on Tucker to encourage a more leisurely pace on walks, less barking and no chewing on couches (but of course). Otherwise, our approach to pup parenting is rather relaxed, and we by no means feel inclined to force Tucker into obedience; we just want him to feel comfortable and at ease around his parents.

Nevertheless, when quarantine opened up my schedule, I decided to challenge both Tucker and myself by attempting to train him in the delicate art of fetching beer — or in my case, La Croix — from the fridge. I admit, I was skeptical; delivering drinks always seemed like a complex trick reserved for rigorously trained dogs, not necessarily Tucker. Still, I figured it would at least be a fun experiment.

Unsure where to start, I contacted Trevor Smith, dog trainer and owner of the Doggie Dojo, who excitedly talked me through the steps of training your dog to fetch beer (or any canned drink), which you can find below.

Step One: Tug on the Rope (Open the Fridge)

“First, I’d teach your dog to play tug on the rope you want them to use to open the fridge,” Smith explains. “Once you have them tugging, try to get them to tug the rope while it’s attached to the fridge. Pro tip: Open the fridge door slightly when teaching this at first — most fridges have a seal when they’re closed to stop them from bumping open. Any time your dog tries to tug on the rope, make sure to reward them, even for trying. Eventually, you can reward them only for solid tugs that result in the door opening.”

“I’d start by teaching your dog to fetch an empty koozie,” Smith suggests. “They’re soft and easy to grab. When you have them fetching the koozie easily, put an empty can in it to make it lighter. Another pro tip: I actually found some prop cans online that didn’t crunch so easily. The real trick is when you put a full beer in it — be careful when you try to open these if they get shook upon delivery. Since your beer will be inside the fridge, try to get them to retrieve it with the fridge door already open.”

“Use a flat fridge magnet, and teach your dog to push on it with their nose or paw,” Smith says. “You can start this by first placing the magnet into your hand with a treat under it. Once the dog pushes on the magnet reliably, place the magnet on the fridge door. Start with the door slightly open, then ask them to push on the magnet. Next, open the door more and more as your dog gets the idea. Over time, your dog will be able to close the door from any open position.”

Step Four: Combine All of the Above

“Now that your dog has learned each of these behaviors, it’s time to put them all together,” Smith emphasizes. “Take your time with each step, and be patient. You might first practice each of these behaviors in different parts of the house to build context. Take little steps to make it easier for your dog to be successful, and have fun with it. That way, your dog will be enthusiastic about bringing that beer and not moving at a snail’s pace.”

“The final step is to build distance to the behavior,” Smith continues. “Start right next to the fridge, then eventually ask for the beer further and further away as your dog builds confidence. Soon, you’ll be having your dog fetch you a beer while you sit back and relax.”

Armed with this knowledge, Tucker and I were finally ready to embark on our journey. Would we succeed? Would we fail miserably? Come along and find out.

Day One: Gathering the Necessities

As Smith explains, there are several things you need to efficiently train your dog how to fetch drinks from the fridge, and I’m spending the first day gathering the following items:

I’m starting our first day of actual training as Smith suggests, and I’m shook by how quickly Tucker is tugging on the rope after I’ve hooked it to the fridge (although, I know he’s fairly toy-driven). I’m certainly having to encourage him to chomp on it, but he’s managing to open the door on his first day, and I couldn’t be more proud.

Tucker also seems more than willing to snag the koozie-wrapped can when I’m handing it to him; he probably thinks it’s a toy. Although, he still seems confused about sticking his head into the fridge to grab it, so we can keep working on that.

One immediate concern: Because of how narrow my kitchen is, Tucker is having some trouble pulling the fridge fully open, rather than just cracking it slightly. That may be a major hurdle, but we’ll see.

I’m Zooming with Smith today and having Tucker show him his progress so far. Besides being impressed by Tucker’s immediate enthusiasm for tugging on the rope and calling him a very handsome boy (which, true), he suggests that I stand where Tucker has been initially pulling from to encourage him to swing the door open from a more reasonable angle, which is working!

He also suggests keeping a few treats inside the fridge, so that Tucker gets used to the idea of being rewarded from within the fridge, which should help him get used to sticking his head in there. So far, all of these tips, along with constant encouragement (and treats), seem to be helping Tucker get that door open and feel more comfortable about it.

He’s doing it! He’s opening the fridge, and grabbing the can from inside (then proceeding to yeet it across the room, but whatever)! He truly is the goodest boy!

At this point, our main issue is that Tucker seems a lot more interested in running away with the can than bringing it to me, but we can work on that. There are also a few logistical problems that I’m realizing: The first is that Tucker is leaving a slobbery mess on the bottom shelf of the fridge whenever he grabs the can, which I’m instantly feeling the need to clean. That means I need to stand up from wherever I am when he delivers the can, which kind of defeats the whole purpose of having him do that for me.

The other problem is that the can is obviously taking a beating in the process of him running around with it, which again leads me to believe that getting a drink yourself is probably easier and a lot less trouble than having your dog do it for you.

That said, training your dog to fetch drinks is a great bonding experience, and I can tell that Tucker is enjoying it, which makes it all worthwhile.

He’s doing such a good job! At this point, Tucker is more or less opening the fridge and grabbing the can on command. He’s usually bringing it at least in my general direction, too. One thing I’m fortunate with — and I imagine some others are, as well — is that my fridge closes on its own, which means I can skip over the step of teaching Tucker to push it closed.

Again, though, because Tucker keeps flinging the can around, there are now several large dents in it, which isn’t very conducive to drinking a carbonated beverage without it exploding everywhere. Still, he’s killing it.

Today, my mission is to encourage Tucker to actually deliver the can, rather than yeet it across the room — and he’s doing an okay job! I’ve just given my girlfriend, who’s sitting on the couch, a few treats, which seems to have coaxed him into delivering the can directly to her. I still need to be in the vicinity of the fridge for him to know what I’m talking about when I tell him to get the can, though.

I continue to hold that this is far from the most efficient way to get a can out of your fridge, but Tucker and I are having fun, which is all that matters.

Welp, after a few fairly successful fetches, Tucker just dropped the already-dented LaCroix, and it exploded.

This provides a fitting end to this experiment and kind of summarizes what teaching your dog to fetch a drink from the fridge is all about: It’s a fun thing to do for everyone involved, but if all you’re after is a cool, non-exploded beer, you might as well just get it yourself. 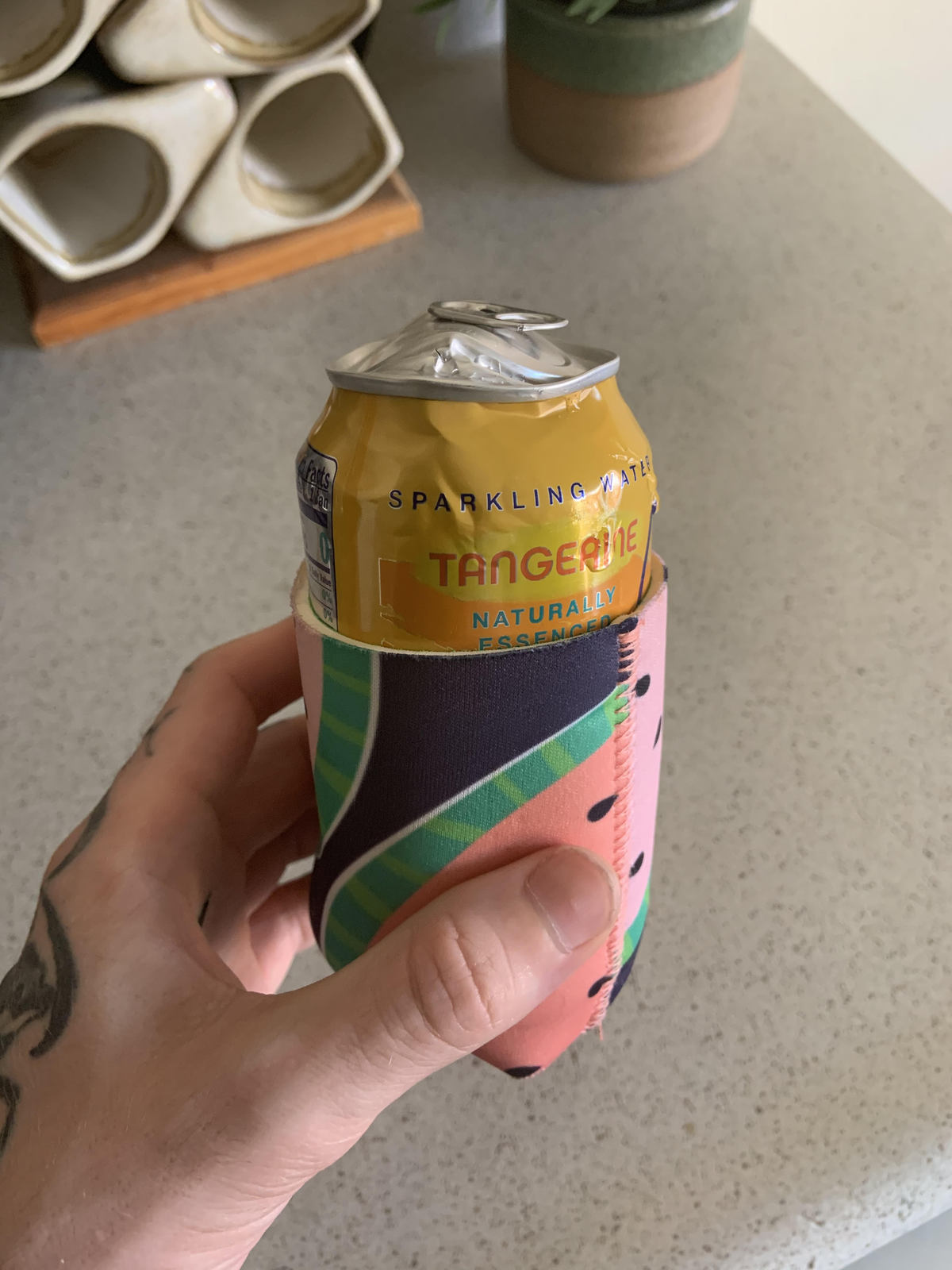 Nevertheless, because both Tucker and I have had such a good time working on this together — and because we still have work to do — we’ll likely keep at it. Smith says he anticipates that most dogs can nail this trick “within a couple weeks to a month,” so I suppose we’re only just getting started.

On the other hand, if I start finding Tucker helping himself to LaCroix — or anything else in the fridge — well… hey, I guess he deserves it, anyway.