Would Tony Soprano Be a MAGA Guy?

Is Tony pro-Trump? If so, would he vote for him? It's a divisive, surprisingly complicated question that's consumed the 'Sopranos' fandom

The Sopranos, the greatest television series in the history of the medium, is so baroque and richly layered that we’re still teasing out its ambiguities more than a decade after the final episode aired. What happened to the Russian in the Pine Barrens? Did Ralphie Cifaretto really kill that horse for the insurance money? And which of the mob wives made the best ziti? With creator David Chase’s fondness for dangling plot threads, there is no shortage of debates to be had over the import of every smallest detail.

But a question that has lately consumed the Sopranos fandom is more theoretical in nature — and it’s proving nearly as divisive as interpretations of the finale’s abrupt and infamous cut to black.

Would Tony Soprano be supportive of President Donald Trump? Is he a MAGA guy?

This tweet lit up a Facebook group called Sopranos Duckposting, devoted to memes and discussion of the beloved show, and there are a surprising number of arguments for and against its thesis. It’s worth mulling in part because the chaos and corruption of Trump’s White House has drawn many comparisons to the Soprano family’s reign over North Jersey, and as it might give us deeper insight into Tony himself, a manipulative antihero with whom we are led to empathize — then cruelly punished for taking his view.

Take our poll here — and then read on. Here are the factors to weigh.

Tony Is a Notable Racist

Tony may save his worst racial epithets for African Americans, but there’s no cause to think he has a higher opinion of the Latinx community, much less undocumented immigrants from below the Mexican border. And his core principle on race — that people should stay “with their own kind” (unless, say, some Cubans can offer you a good deal on power tools) is a segregationist stance baked into the MAGA rhetoric. A president who seemed more interested in cracking down on asylum seekers than organized crime could also be a plus.

Trump loomed large in the tri-state area for many years before his presidential campaign. A Jersey native myself, I grew up reading about his bankruptcies and messy personal life in the New York Daily News. A.J. Soprano was impressed enough by Trump’s reputation to develop a pipe dream about one day becoming his helicopter pilot. (David Chase said he could’ve wound up Chief of Staff, or at least buddies with Stephen Miller.) Could the real estate mogul’s regional influence and ties to the mafia convince Tony that he’s the right man to run the country? This is where it gets complicated. More plausibly, Tony would worry that scrutiny of Trump’s checkered past could draw attention to major grifts in the area, like the Esplanade project or Barone Sanitation. And you know he’d turn on the guy as soon as Rudy Giuliani — who made his name prosecuting mobsters — began defending him.

The Sopranos Are Republicans

In the wake of 9/11, both Tony and Carmela Soprano remarked on their investment in the Bush administration, although Tony’s rap sheet, paranoia and general inertia make him a likely nonvoter. While the feds’ anti-terror investigations did cause a few problems down at Port Newark, their focus on potential jihadis over homegrown crime is a net win for him. (Again: Tony benefits from institutional racism.) Moreover, the incompetent recovery effort in New Orleans following Hurricane Katrina allowed Tony to line his pockets with FEMA money earmarked for contractors, leading him to endorse Dick Cheney for president “of the fuckin’ universe.” It’s easy to imagine similar schemes unfolding as Trumpworld deregulates every industry at a frantic pace. The gutted IRS sure isn’t nailing him for tax fraud. Plus, there are big construction plans afoot… 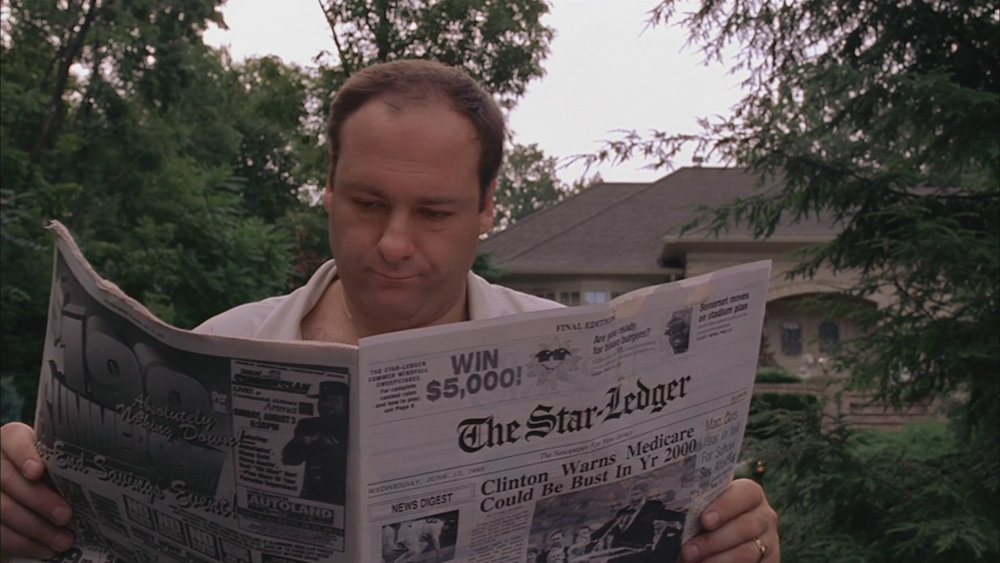 This is a tough one. Tony loves the newspaper, and he’s a lifetime subscriber to his local broadsheet, the Star-Ledger, which occasionally feels like all that anchors him to life — a reason to walk down the driveway in the morning. At the same time, he despises the smug journalists who report on the criminal underworld and go on talk shows to discuss the mob.

For the most part, however, I’d bet he has a soft spot for the poor slobs working to report the stories that depress him day after day, and not much sympathy for a boss figure with skin as thin as Trump’s. It’s not to say Tony believes everything he reads (or has a strong grasp on, like, climate change or NATO), but he has an intuitive grasp of the world as it is, and the “Fake News” bit would grate on his nerves pretty fast.

Ultimately, this may be a matter of temperament. Tony could approve of Trumpian policy while hating the guy himself, much the way he despised a handful of good earners and essential business partners. Crucially, Trump is a loudmouth crybaby, quite in contrast to Tony’s masculine ideal of “the strong, silent type,” and perfectly terrible at the kind of dissembling and manipulation for which he has a natural talent.

David Chase himself says Tony “would think [Trump] is full of shit” and “penny-ante,” for what it’s worth. Personally, I consider Chase only the second-highest authority on the show he created. The top expert is writer and historian Angela Serratore, the one person I can say for sure has rewatched The Sopranos more than I have. She’s often asked to share her keen insight into the most recognizable family of Golden Age TV, and I knew she’d settle this MAGA Tony thing.

“I think on the surface he would” be a MAGA type, Angela says, “and maybe he’d even vote for Trump! But to me one of Tony’s defining characteristics is that he knows, instinctively, when someone is full of shit? Possibly because he himself lives a life based on lies? Not just the killing-and-fucking lies, but the ‘I’m a good person’ lie.”

Moreover, when it comes to tentpole promises like the border wall, Angela doesn’t see a strong affinity. “Tony knows criminals don’t give a shit about a wall,” she notes, and seeing it as a financial opportunity “is not the same as being pro-wall ideologically.”

“People aren’t wrong that Tony himself is kind of Trumpian,” she continues, “but the thing they’re ultimately missing is that at his core, Tony hates himself and knows he’s a void who will never truly understand what it means to feel. This is why he would hate Trump. Does Tony support Trump? Possibly! Does Tony believe in anything? No.”

So, he’d be full of contradictory ideas, expressing some, repressing others and failing to locate any true allegiance or moral imperative? And that discord would be wrapped up in fatalist indifference? Couldn’t be more on-brand. A magnificent lack of catharsis, really — because much like the end of the series, it’s an unresolvable question.

And so… what about the rest of the family?