Inside the Great War of Tim vs. Tom

On Reddit, r/Tim and r/Tom threw down in the most vicious meme battle they’d ever seen, complete with turncoats, allegiances, uprisings and even a United Nations for dude names. We report from inside the battlements

It was a dreary night like any other in London, when redditor eggzbennedictegglord (real name: Tom) was browsing the internet on his phone. As a new-ish member of the subreddit r/Tom, he was itching to prove his allegiance to the 5,331 other Toms in the subreddit.

He’d seen growing tensions with the forum r/Tim, “a place for Tims.” So eggzbennedictegglord had an idea: an invasion of r/Tom that would put an end to the ongoing meme strikes between the two subreddits. Upon his iPhone 7, the 16-year-old hammered out a post that would eventually be seen by millions. Titled “Toms, rise up!!,” it read (sic throughout):

“My brothers, its time to end this war with the Tim’s.

“In just 3 days we shall raid the r/Tim subreddit until we claim it our own, it will be full of not ‘timdivisuals’ but for TOMdividuals! we have seen enough bullshit, and it is time to start revolution, the TOMvolution after we, Toms win the battle of the Tim’s, we shall find other subs with people thinking their names are better than ours!! … All hail tom, the true master of the universe!!!!!!!!”

As eggzbennedictegglord’s post rose to the top of Reddit, r/Tom members prepared their battlements. Memes making fun of anyone named Tim would be the vanguard. “The low-IQ Tims would be distracted, arguing in the comments of our memes. Everyone loves memes even if they’re the butt of the joke,” one Tom tells me. “As the Tims were distracted, we’d raid.”

That was the plan, anyway. But little did r/Tom know, a turncoat was in its midst. Or should I say… a tomcoat.

“What would the world think of Toms if they succeeded?”

“My birth name is Thomas, so I’d belonged to r/Tom for a few months before seeing the post. They were planning a raid on r/Tim, and thought spamming rhetoric and posting memes would end the conflict,” the tomcoat, Thomas, tells me. “This rubbed me the wrong way. The Tom who posted this was a cruel, narrow-minded person and wanted nothing but war. If r/Tom fell privy to his rhetoric, they would raid other names. r/Chris, r/Andrew, no one was safe. What would the world think of Toms if they succeeded?”

After arguing with eggzbennedictegglord, Thomas decided, “Despite my birth name being Thomas, I belonged with the Tims. Tims are more chill than the Toms, more mature,” he says.

“I pledged my loyalty to the Tims and offered to spy on the Toms,” Thomas admits. “The Tims, now knowing about the raid the Toms were planning, decided to raid r/Tom a day earlier than the Toms’ planned raid.”

It was too late, however. The Toms had already struck.

“I remember the beginning of the Great War like it was two weeks ago — because it was.”

A battle-weary, 17-year-old Tim in Ohio tells me his story via Reddit direct message. “We’ve been at each other’s throats for a long time, warring on and off, but this time it was really bad,” he writes. “I remember the beginning of the Great War like it was two weeks ago — because it was.”

“I was just about to finish an eight-hour shift at work,” he continues, “when I saw a resolution had been passed: Either Tims hand over control of our subreddit to the Toms or ‘fAcE tHE mIGhT oF r/tOM.’ I chuckled and figured nothing would come of it. But a little while later, they started posting anti-Tim memes on our subreddit.”

For this Tim in particular, a line had been crossed. “They broke the No. 1 rule of meme warfare: No Brigading” — which means sending a group of people from one subreddit to spam another subreddit.

Tim had no choice but to take up arms with his brethren and begin making anti-Tom memes. “We Tims are ul-tim-ately a family,” he says. “You can disrespect your family as much as you please, but when someone else does, the gloves are coming off.”

Tim’s sentiment — banding together with other Tims merely because of his name — echoes what some digital sociologists deem “digital tribalism.” Essentially, the internet, once a great unifier, has divided us into “tribes” based on religion, political beliefs, race and even names.

“Group formation online depends on what platform people use,” explains Gina Longo, a digital sociology professor at Virginia Commonwealth University. “With Reddit and its various subreddits, people are looking for a content community without an interpersonal dynamic like Facebook. It’s anonymous and doesn’t require the human face in the same way that Facebook does. Themes, input and hot takes on particular issues are most important. That said, not having a human face to connect to makes it easier for things to become more toxic. And since we don’t see the person behind the post, it becomes easier to demonize who we don’t know.”

“The anonymity also can foster the call-to-arms you see,” she continues. “Those who troll or connect to more alternative movements find this a comfortable feature, especially in subreddits, which are awash in an ironic subculture that rewards trolling, racism, sexism and other -isms out there — all things that, again, thrive on anonymity.”

“For a long time, I had a suspicion about Toms, but after but this recent conflict, I learned just how awful they truly are.”

All hell broke loose when a post in the massive r/AskReddit subreddit (25 million subscribers and counting) asked, “What are some REALLY REALLY weird subreddits?” One of the top comments linked to the ongoing conflict between r/Tim and r/Tom.

“The r/AskReddit post shone a large spotlight on the war,” says Juzt_Tim, the ambassador of r/Tim Alliances. “For a long time, I had a suspicion about Toms, but after this recent conflict, I learned just how awful they truly are.”

As thousands of non-Tims and non-Toms flooded into the warring subreddits, the two factions continued to battle. Paranoia spread, memes lit up the skies, olive branches were denied and both sides began reaching out to other name subreddits for allegiances. “After a thorough review of r/David, I deemed them worthy of an alliance with r/Tim,” Juzt_Tim says. “r/David hadn’t yet taken the side of the Toms and were looking for an ally.” (One might think r/Jim would be a natural ally to r/Tim, but the Jims seem to have their own issues going on — and eventually became a target themselves) 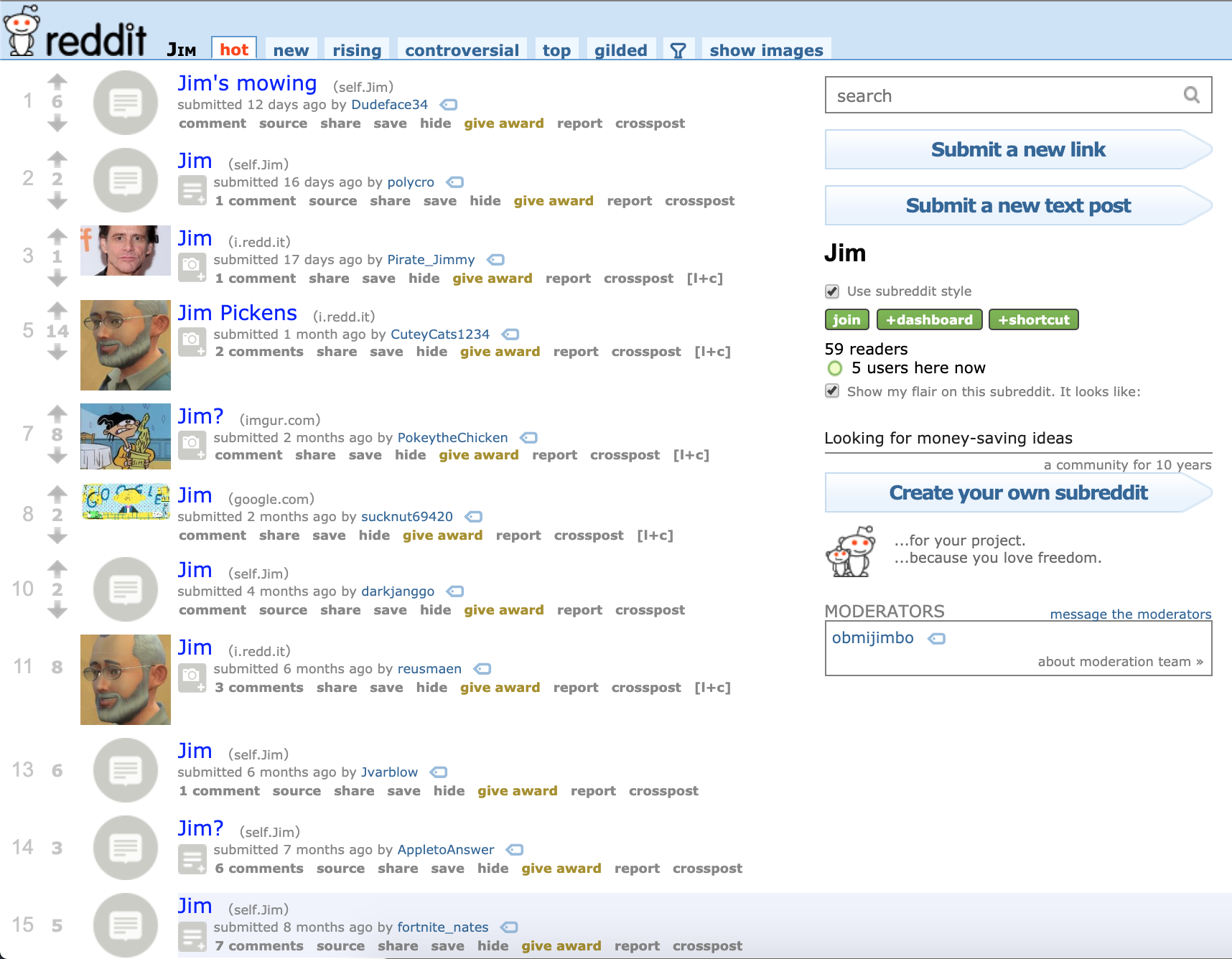 In all the chaos, even more name subreddits were uncovered. “Then, they began to make their own allegiances. Soon after, r/UnitedNames began to grow,” Juzt_Tim explains. He feels compelled to add the obvious: “r/UnitedNames is like the United Nations but for names. In it, you’ll find posts about wars between other subreddits and which names have alliances. r/Tim is now a member of UnitedNames, but r/Tom is not.”

As a UnitedNames member, r/Tim has found both protection and reinforcements. Because if r/Tom acts up and declares war on r/Tim again, they’ll now feel the wrath of r/David, r/Chris and r/Cody, too. It also brought the war to a close. “It was a decisive victory for the Tims,” Juzt_Tim proudly informs me. “The same user who posted the original declaration of war came back and made a new post, saying it was a light-hearted joke that went too far.”

“Although I was sad to see such an abrupt end to the war,” he adds, “I realized that it was for the best. For many had taken the joke too far and ruined the event.”

Nonetheless, Thomas the tomcoat remains in hiding. The Toms wouldn’t be happy to find out his true identity, he says. Plus, he believes the war is far from over. “There have been discussions of peace,” he tells me. “But there have been just as many about war. Without clear leadership brokering a peace deal, the Tims and Toms are just militias. No side will win, surrender or make peace until that happens.”