The Best Part of Will Ferrell’s ‘Eurovision’ Is Rachel McAdams

The Netflix comedy ‘Eurovision Song Contest: The Story of Fire Saga’ is zany and oddly touching, but it wouldn’t work without the Oscar-nominee and underrated comedienne, who brings real heart to the silliness. (Plus, she’s a lot funnier than her co-star.)

I imagine that most people who tune in to Eurovision Song Contest: The Story of Fire Saga will do so for one of two reasons: Will Ferrell and Eurovision, the spectacularly bizarre music competition that’s been held in Europe since 1956 and has recently become an obsession for American viewers who can’t get enough of its campy weirdness. One such fan is Ferrell, which isn’t surprising considering he has a fondness for kitschy pop culture like telenovelas (Casa de Mi Padre), Lifetime movies (A Deadly Adoption) and the Rose Parade (Cord & Tish). Dressing like a Viking god while bellowing power ballads is very much his thing.

But there’s also another group of individuals who should be excited about Eurovision Song Contest — and as part of this contingent, I’m happy to tell my fellow Rachel McAdams fans that, yes, she’s very good in this otherwise so-so comedy. In fact, she seems to be the one person involved in Eurovision Song Contest who takes it seriously enough to make it really funny and surprisingly touching.

As great as Ferrell can sometimes be, he has a frustrating tendency to approach certain projects as almost dares to his audience, testing our patience for his odd amusements. In interviews, he’s talked about how much he enjoyed on SNL when a sketch was bombing — how the rank, awkward awfulness of an unfunny bit made him love it even more. There’s a part of Ferrell that relishes torturing us or, at the very least, confusing us. The guy is a comedy superstar with more than enough money: Why in the hell does he occasionally wake up early on New Year’s Day just so he and Molly Shannon can play clueless parade hosts for several hours, riffing on floats and improv-ing wildly? (For the record, I think Cord & Tish is hilarious.) Call it fearlessness or self-indulgence, but Ferrell enjoys plowing face first into his next peculiar idea — and if you think he’s wasting his time, that probably only pleases him more.

By Ferrell’s standards, Eurovision Song Contest is a mixture of mainstream goofiness and Cord & Tish-style curiosity. You don’t have to be familiar with Eurovision to appreciate this Netflix film (which hits the streaming service on Friday), but it definitely helps. Even then, though, you’d better be cool with two main characters who speak in the stupidest Icelandic accents ever — and who generally act like morons.

Meet Lars Erickssong (Ferrell) and Sigrit Ericksdottir (McAdams), childhood friends who grew up in a small fishing community and have always had a passion for music — even if that passion has rarely translated into actual talent. Infatuated with ABBA, the duo (dubbed Fire Saga) set their sights on getting to the annual Eurovision contest, which requires each country’s representative to perform their own original song, often with a crazy outfit and a feverish lighting design. Lars’ disapproving father Erick (Pierce Brosnan) doesn’t think his boy has a shot in hell, but you can’t stop a middle-aged loser with a dream. 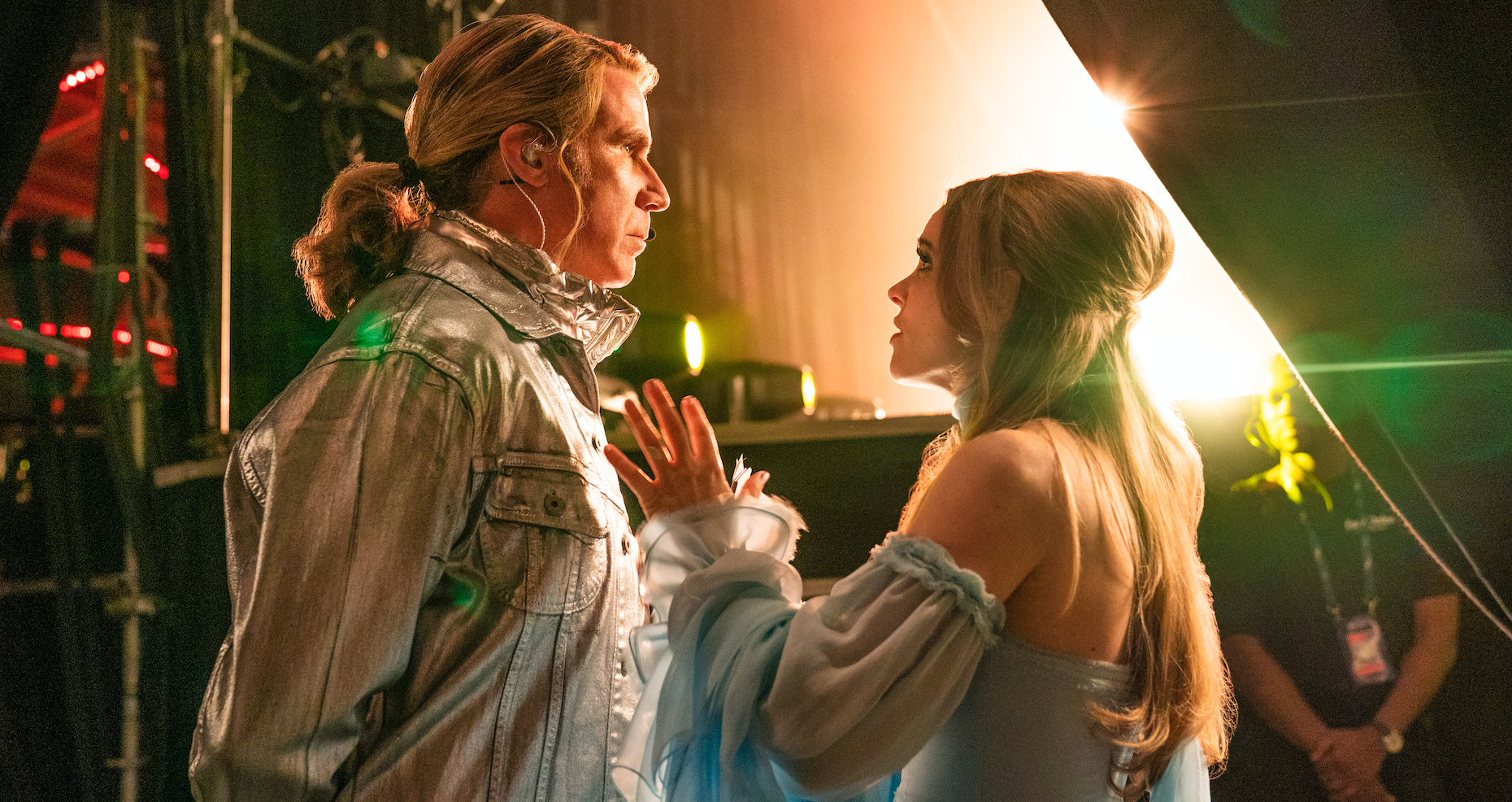 Like A Mighty Wind without the mockumentary aspect, Eurovision Song Contest is an affectionate sendup of a specific musical style — in this case, the brazen, shameless spectacle of Eurovision performance, which can range from hip hip to metal to pop. Everybody in this movie talks funny — the more unconvincing the accent, the better — and the songs are different shades of so-bad-they’re-amazing schlock. (Dan Stevens, possibly best known as the tormented antihero of Legion, has a hoot playing Lars’ Russian adversary, the arrogant, possibly gay Alexander Lemtov, who belts an anthem that has something to do with him being a lion.) Everyone on screen is varying degrees of dumb, and the story’s familiar getting-ready-for-the-big-competition narrative gives the filmmakers a comfy clothesline on which they can throw tons of random jokes.

I just wish I found the whole thing funnier. In the past when Ferrell locked into a funny world — like he did with Anchorman, Talladega Nights, Step Brothers and The Other Guys — 90 percent of the hard work was done, because then every joke, every gag, every strange digression was bolstered by the inspired framework. But Eurovision Song Contest, despite its potentially rich subject matter, doesn’t end up having much lift to it. The film’s silly but only rarely hysterical, as if everybody involved assumed that outrageous getups and dopey voices would be enough.

Unfortunately, Eurovision Song Contest is undermined by one of Ferrell’s least amusing characters. Sporting ridiculous Thor-like locks, Lars is a perpetual schmuck, but he’s not an especially entertaining schmuck. (Unlike, say, Ron Burgundy, Ferrell doesn’t have a particularly sharp take on the guy, no bigger idea about a certain kind of male oaf that he’s trying to explore.) And because so much of Eurovision Song Contest is about Lars’ relentless, seemingly foolhardy quest for Eurovision glory, we don’t get much of a break from him.

This is where McAdams comes in. Although she’s done her share of comedies, I think it’s fair to say that the Oscar-nominee is more thought of as a dramatic actress thanks to her work in Spotlight, Disobedience and True Detective. But every time she does lighter fare, it’s a reminder all over again about how great she is at it. (Her daffy, bored wife in Game Night was a brilliant creation: “On no, he died!” is a line-reading for the ages.)

Eurovision Song Contest represents a reunion with David Dobkin, her director on Wedding Crashers, which was a fantastic early platform for her effortlessly endearing comedic side. While Owen Wilson, Vince Vaughn and Bradley Cooper were more broadly “funny” in that 2005 film, McAdams was delightfully real — she grounded that bromance in something heartfelt and believable. She does the same for Eurovision Song Contest, playing Sigrit as an endlessly enthusiastic creative partner to Lars, who’s she adored (and secretly loved) since he was the cool older boy she grew up around. (One of the film’s middling running jokes is that some people in the small-town community keep erroneously thinking that they’re brother and sister, which Sigrit defensively pushes back against.)

The movie never entirely recovers from the fact that Ferrell (who turns 53 next month) and McAdams (who’s 41) look so different age-wise that the screenplay’s slow push to turn them into a romantic couple feels cringe-y. But McAdams almost makes it work because of the way that Sigrit so unreservedly believes in Lars. Everybody else in Eurovision Song Contest is dumb, but Sigrit is merely naïve, which is an important distinction. Not hampered by ego, arrogance or demons, she just wants to help Lars, who barrels through life because he’s convinced he’s destined for greatness. The movie’s best joke is that this lummox doesn’t deserve someone so wonderful in his corner.

That setup leads to plot complications, of course, with the unappreciated Sigrit eventually being wooed by Alexander, who recognizes that she’s the secret superstar in Fire Saga. (Sigrit’s soaring vocals are supplied by McAdams and actual Swedish singer Molly Sandén.) Will Lars finally realize how talented Sigrit is — and, more importantly, that he loves her the way she loves him?

As zany as Eurovision Song Contest often is, the movie ends up being one of the most unexpectedly moving of Ferrell’s career — certainly it’s his sweetest since Elf. And it’s telling that that tonal shift occurs once Sigrit starts taking control of the story. McAdams isn’t uproarious in Eurovision Song Contest but she’s utterly lovable, which can be just as hard to achieve. She makes Sigrit adorable without being cutesy about it — she hints at all the depth within a bubbly character who has been taken for granted by Lars.

By the end of Eurovision Song Contest, however, both Sigrit and McAdams are the film’s main attraction. Ferrell has often worked well off a co-star, but this may be the first time that his supporting act has stolen a movie from him. Lars eventually learns that he needs to pay more attention to the amazing woman right next to him. Eurovision Song Contest only gets good when it decides to do the same.