The Life-Changing Gastronomy of Ocky’s Bodega

From his 50-square-foot Brooklyn kitchen, TikTok hero Rahim Mohamed pumps out the most insane sandwiches I’ve ever witnessed from a convenience store. I had to try it myself.

From the street, Family Food Center doesn’t look like much — just a squat brick building that’s a bit worse for wear, with roll-up shutters and windows that show off shelves of toiletries. It sits on the northeastern edge of Red Hook, Brooklyn, right below the tony enclave of Carroll Gardens. You would be forgiven for driving past it on your way to Ikea without ever guessing what awaits inside. But to do so would be a terrible mistake.

The scattered-looking facade at 603 Clinton Street is but an understated gateway into a world of true gastronomy. Consider it the Platform Nine and Three-Quarters of the bodega world; pass the threshold, and behold the wizardry. You can see it all unfold on the TikTok account of Rahim Mohamed, aka Rah_Money1, aka “General Ock” (a bastardization of “ahki,” Arabic for “brother”).

Rahim holds court daily from behind the expansive counter, with a full deli case on one side and a flat-top range and frying station on the other. And from this 50-square-foot kitchen, Rahim pumps out the most insane sandwiches I’ve ever witnessed come out of a glorified convenience store.

I mostly grew up in the suburbs, meaning the closest equivalent to a bodega with food was the 7-Eleven located five blocks from my house. My mind used to race when I saw depictions of East Coast bodegas in movies and TV shows. I wondered what it would be like to get on a first-name basis with a clerk who remembered exactly what kind of roll I like my bacon, egg and cheese on. Then I stumbled across Rahim’s TikTok this winter, and realized that I didn’t have to wonder anymore. Here was the real deal, documented in all its glory.

A peanut butter, banana and bacon sandwich, fit for Elvis’ funeral. A BLT between two Pop-Tarts (?!?). Sausage and cherry-red Taki chips on a hero roll. Bacon, egg and cheese on a Jamaican beef patty. Tuna salad with Cheez-Its on white. A French toast burger. Falafel with cream cheese and fries in a wrap.

The first video dropped in June 2020, but it was really in the winter that Rahim hit his stride, focusing on weird and wondrous sandwich requests and racking up millions of views for it. Are they really walking in, picking up a packaged honeybun off the shelf and asking him to use it in a sandwich, or is Rahim actually pulling the strings? I have no idea, to be honest. And I don’t even care, frankly; I’m over here gawking at the sheer amount of fresh ingredients Rahim has access to. It’s no small feat to produce so many dishes from such a tight, nondescript space. I would know: I literally grew up in convenience stores that served food.

As you might expect, the most outrageous-sounding flavor combinations tend to attract the most attention. Layering a Jamaican beef patty with cheese and Pop-Tarts might sound like an abomination to God, but more than 6 million views don’t lie. I may have also gagged a tiny bit while thinking about a bacon, egg and cheese on chocolate chip cookies, but such is the cost of cutting-edge experimentation.

Instead, it’s the more… subdued specialities that get my own appetite going. There’s the New Yorker wrap, melding chopped chicken, sweet peppers and pickled jalapeños with cheese. I love the idea of the BLT honeybun, which I think makes sense for anyone who enjoys sweet and salty flavors blended together. And I’d kill for a cheesesteak that has spicy chips crushed right in.

Still, I’m not quite yet ready to hop on a plane and jet off to Brooklyn to taste all these creations for myself. So instead, I decided to recreate Rahim’s magic in my own kitchen some 3,000 miles away in San Francisco, with a couple of tweaks to make them original entries. 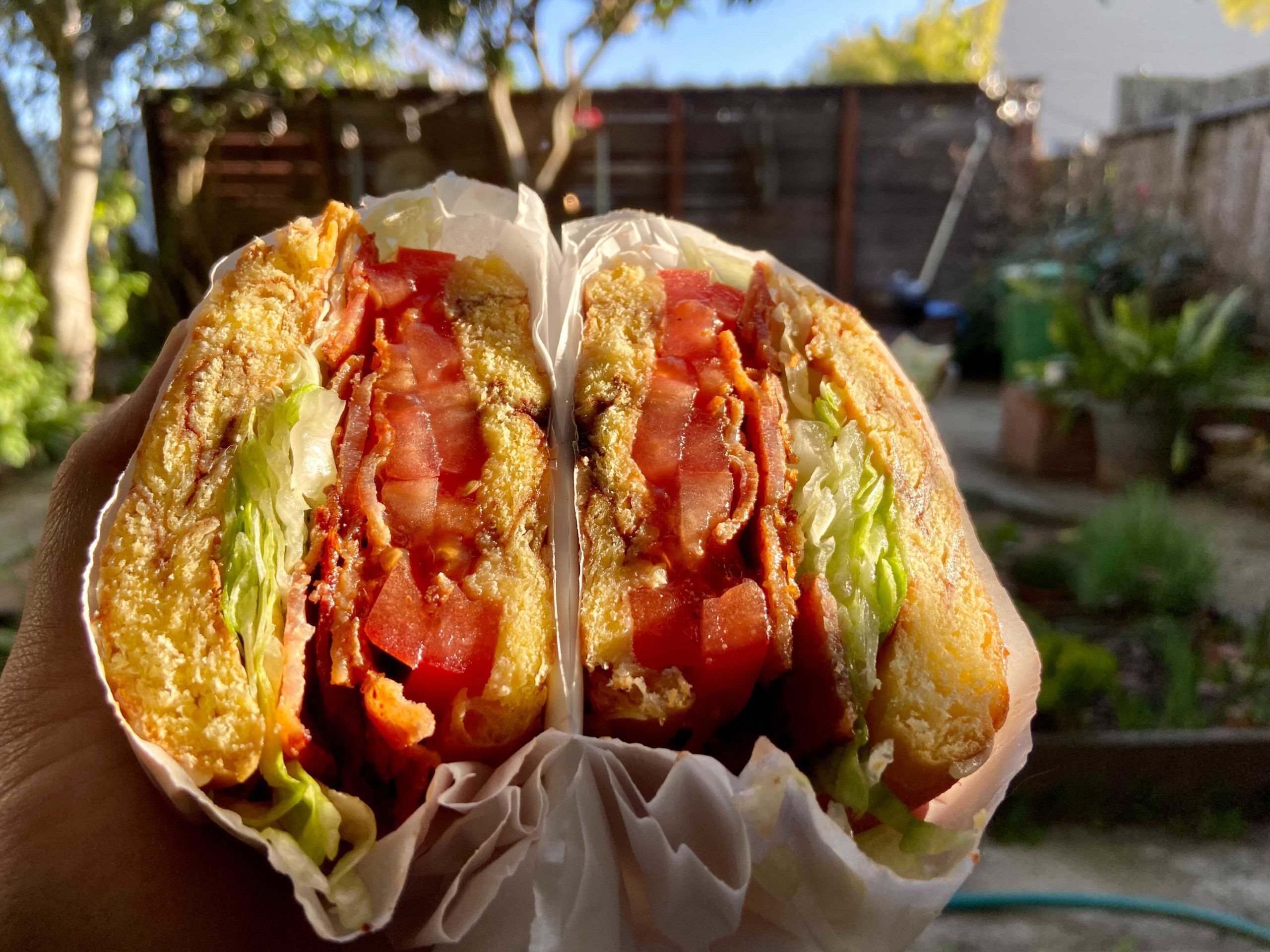 First, the Cinnamon Bun BLT, featuring crisp bacon, iceberg lettuce and two slices of tomato, all sandwiched between two packaged cinnamon pastries with a shake of salt and pepper. To be honest, I didn’t even feel the urge to get stoned for this. It’s just delicious, hitting every taste bud with a smack of salt, sugar and fat. The twist of cinnamon adds a spice note that plays nicely with the bacon’s smoky edge.

Second, my pièce-de-résistance tribute to making sandwiches “the Ocky way”: chopped cheese on buttermilk pancakes. I threw down a fresh beef patty with a handful of sliced white onion into a cast-iron pan, and seared it hard before flipping it and chopping it up with a sprinkle of Sazón and black pepper. I tossed on two slices of cheese, letting it melt in the heat of the pan, before loading it all onto a freshly cooked pancake with some ketchup, mayo, lettuce and tomato.

I mean, just look at this: 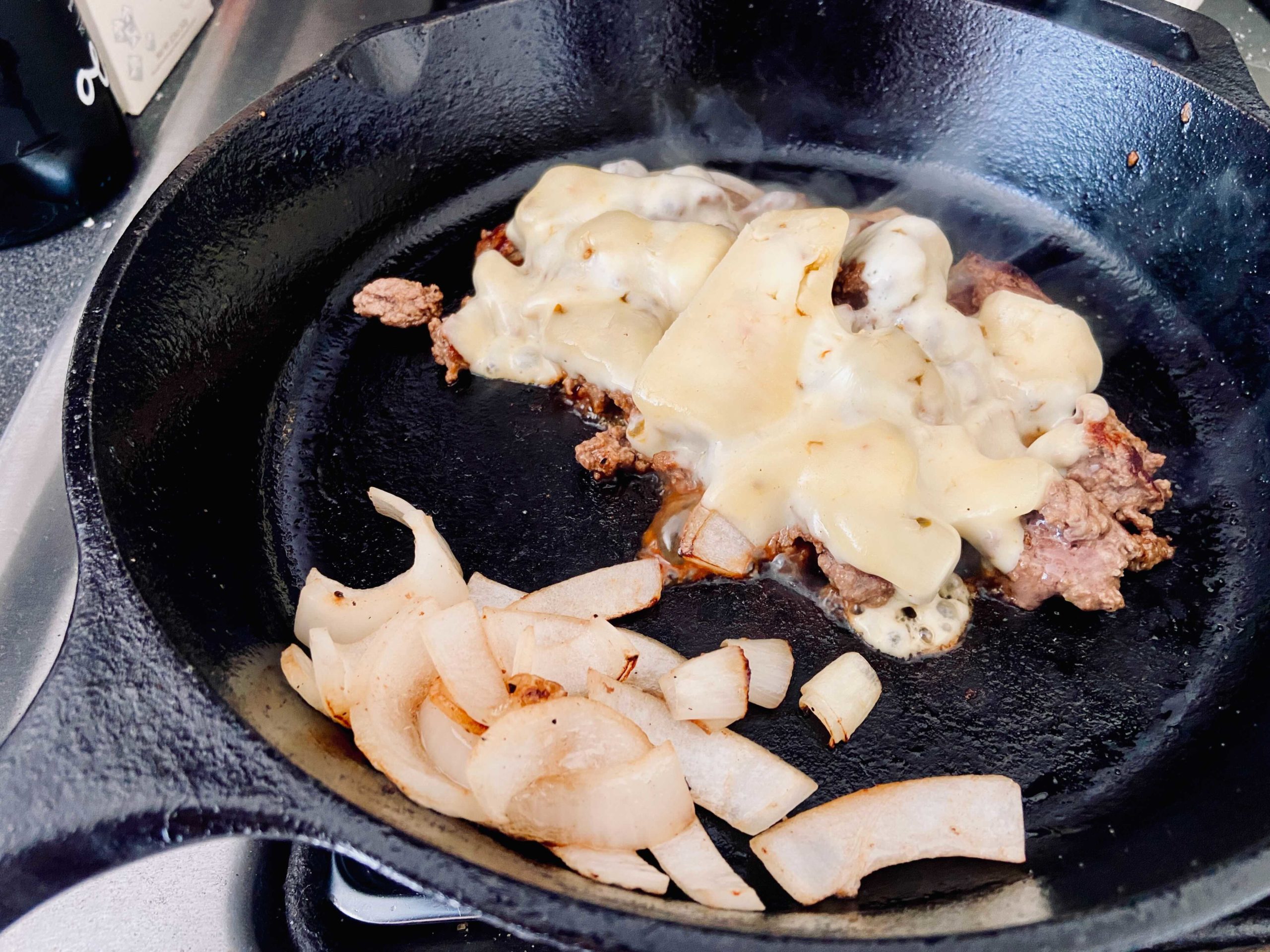 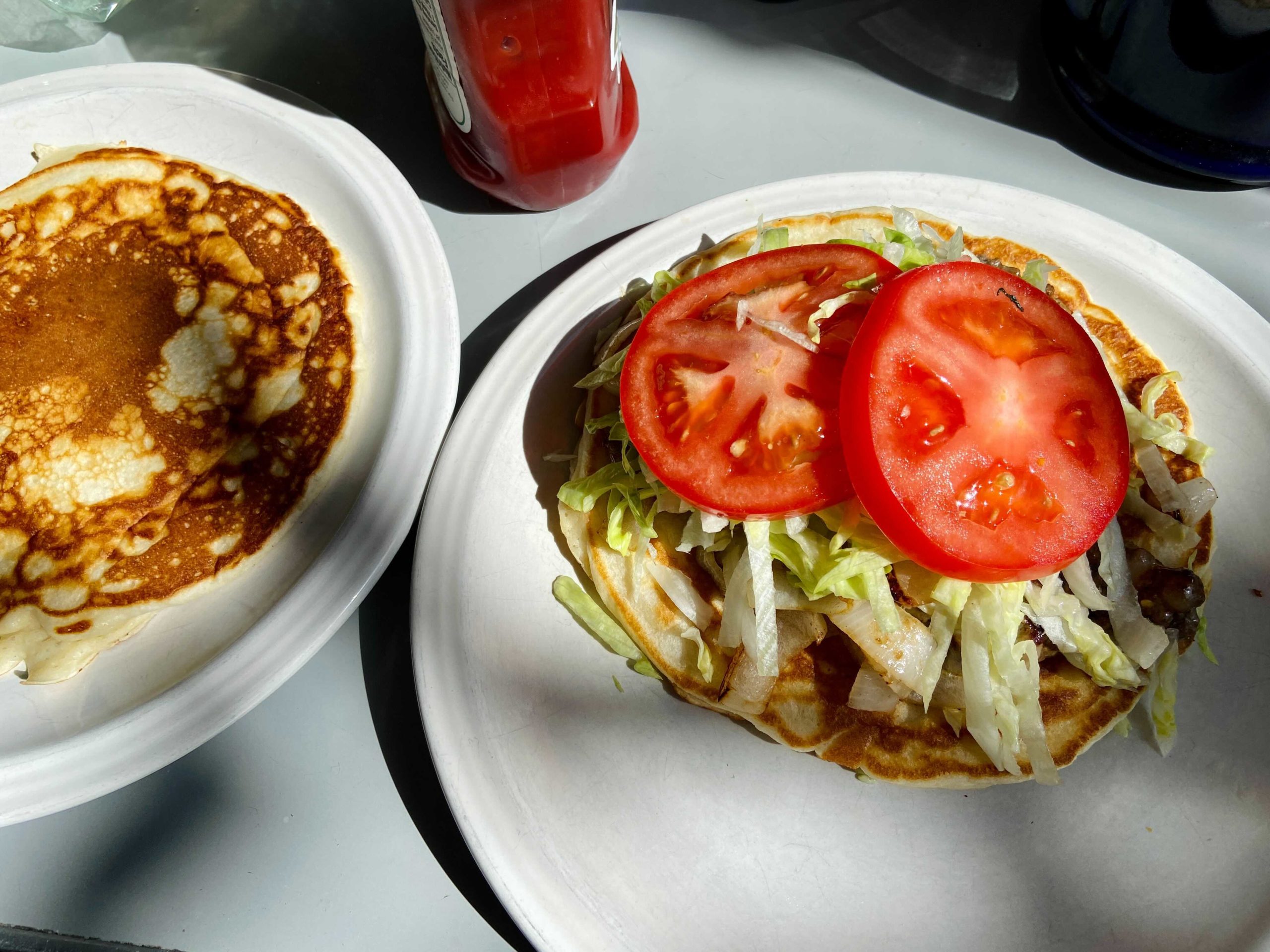 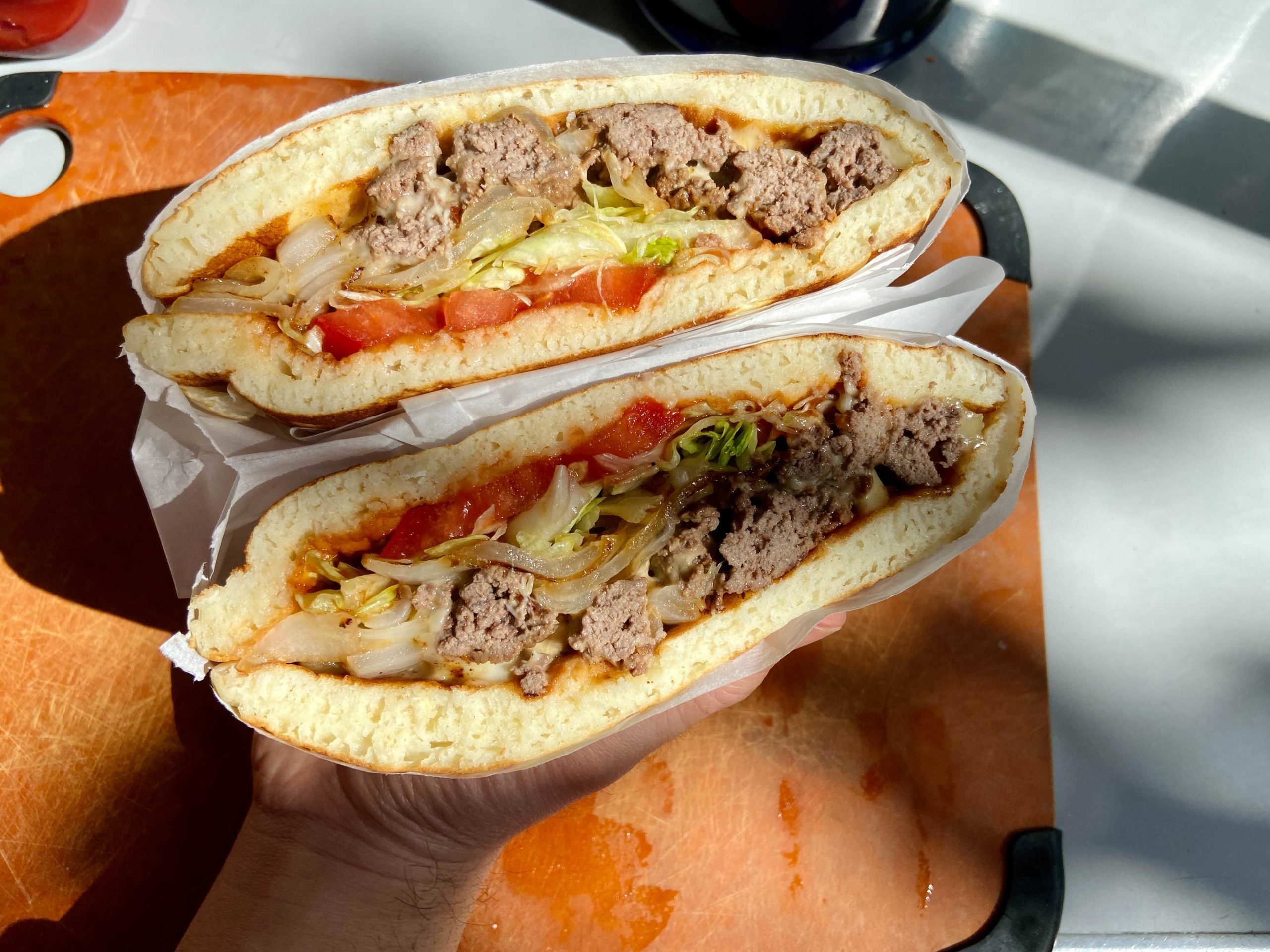 I’m not one to root for dumb fad foods that trend on social media, but if wildly creative, extremely silly foodstuffs are going to go viral, this is what I expect: something grounded in a community and a family business. Day after day, Rahim shows up to wow the masses using a humble but impressive set of familiar ingredients (and catchphrases, like “Neva neva neva forget the bev!”).

I’m just glad I get to watch — and get inspired to make some bodega magic myself.