With ‘Tigertail,’ a First-Generation Filmmaker Honors His Immigrant Father’s Sacrifice

This Netflix drama from ‘Master of None’ co-creator Alan Yang might be a little stodgy, but its tone perfectly mirrors a main character who’s learned to keep his emotions at bay in pursuit of the American dream

Probably my favorite episode of Master of None is “Parents,” in which the show’s main character Dev (played by series co-creator Aziz Ansari) and his pal Brian (Kelvin Yu) are annoyed by their demanding parents, leading to flashbacks that show us the sacrifices they made to come to America in order to give their ungrateful sons a better life. The episode won a writing Emmy for Ansari and the show’s other co-creator Alan Yang, who are both first-generation Americans. In 2015, Yang recalled the inspiration for “Parents”:

“I was sitting in Aziz’s hotel room, and we were trying to work on the show. And I told him this story about [my] dad, which is real, which is that he grew up in a 500-square-foot hut in Taiwan with a single mother and two brothers. And he didn’t have enough food to eat to the point where he had to kill his pet chicken when he was eight years old. … And I was talking to Aziz and said, ‘And now his son gets to sit in a hotel room with a famous comedian and work on a TV show with him.’ And it was just so staggering. And Aziz had similar stories about the sacrifices his family had made. And it’s just something you kind of take for granted sometimes as the children of immigrants, and it’s very legitimate. All of the emotions in that episode are very real because I’ve felt that guilt before and think Aziz has too.”

The 36-year-old writer, producer and director has primarily worked in comedy, part of the creative team on Parks and Recreation and Forever. But for his feature directorial debut, he’s gone in a more somber vein, although he hasn’t strayed far from the impulse that powered “Parents.” Yang is still thinking about that first-generation guilt — and the father that crawled so he could run.

On its face, Tigertail (which begins streaming today on Netflix) is an earnest, somewhat stodgy character drama about Pin-Jui (Tzi Ma), an older Taiwanese man living in New York who’s looking back on the bittersweet circumstances that brought him to America as a young man. But as the film rolls along, Yang keeps subtly twisting the knife on this seemingly straightforward, sentimental immigrant tale. Tigertail isn’t simply a story of leaving everything behind for a better life — it’s about the sadness you bring along with you that ends up influencing the generations that follow.

The film moves between the present — in which Pin-Jui lives alone and has a frosty relationship with his adult daughter Angela (Christine Ko) — and the past, circa the late 1960s in Taiwan, where we meet a younger, impoverished Pin-Jui (Hong-Chi Lee) who’s hopelessly in love with the much wealthier Yuan (Yo-Hsing Fang). Yang’s script bounces back and forth between eras — as well as Pin-Jui’s initial years in New York — so that we get the full measure of this unhappy man. Nothing that happens in Tigertail is particularly surprising, especially when Pin-Jui, in order to financially support his single mom, accepts a lucrative offer to move to the States with his boss’ daughter Zhenzhen (Kunjue Li) as part of an arranged marriage. Doing so means leaving behind Yuan, his true love, but it’s a sacrifice he feels he must do for the good of his family.

As a white man whose family has been in America for several generations, I can’t possibly pretend to understand every nuance that Yang brings to Tigertail, which encompasses everything from Chinese-Taiwanese tensions to the disconnection that first-generation Americans feel for a homeland they barely remember, if at all. But as with “Parents,” Tigertail communicates its themes of guilt and regret with such specificity that it’d be impossible not to pick up on the long string of pain that connects Pin-Jui to Angela, even though they can barely speak to one another. (Noticeably, Pin-Jiu also has a son, but he’s nowhere in sight, presumably far from the familial drama.) Father and daughter harbor the same crippling emotional reticence, and the tragedy is that he inadvertently gave his to her.

Don’t assume this movie is strictly autobiographical. Yang has said that Tigertail “is kind of my dream of my father’s dream of his past. It’s emphatically not his story in some ways.” More accurately, Tigertail seems to be Yang’s way of processing his dad’s (and so many immigrants’) journey. For someone so associated with smart TV comedies, it’s a bit of a letdown that Yang is steadfastly solemn in his directorial debut, sometimes mistaking strained dourness for heartfelt sincerity.

Although no less thoughtful, “Parents” proved to be a more incisive take on similar subject matter while still being plenty funny. But from the occasional voiceover (provided by Yang’s own father) to the hushed tone, Tigertail has the feel of a nervous son wanting to make his parent proud, fearful of putting a foot wrong. The performances are all solid, but also a bit stiff. You never forget for a second how precious this story is to Yang. But a lighter touch might have made the impact even stronger. 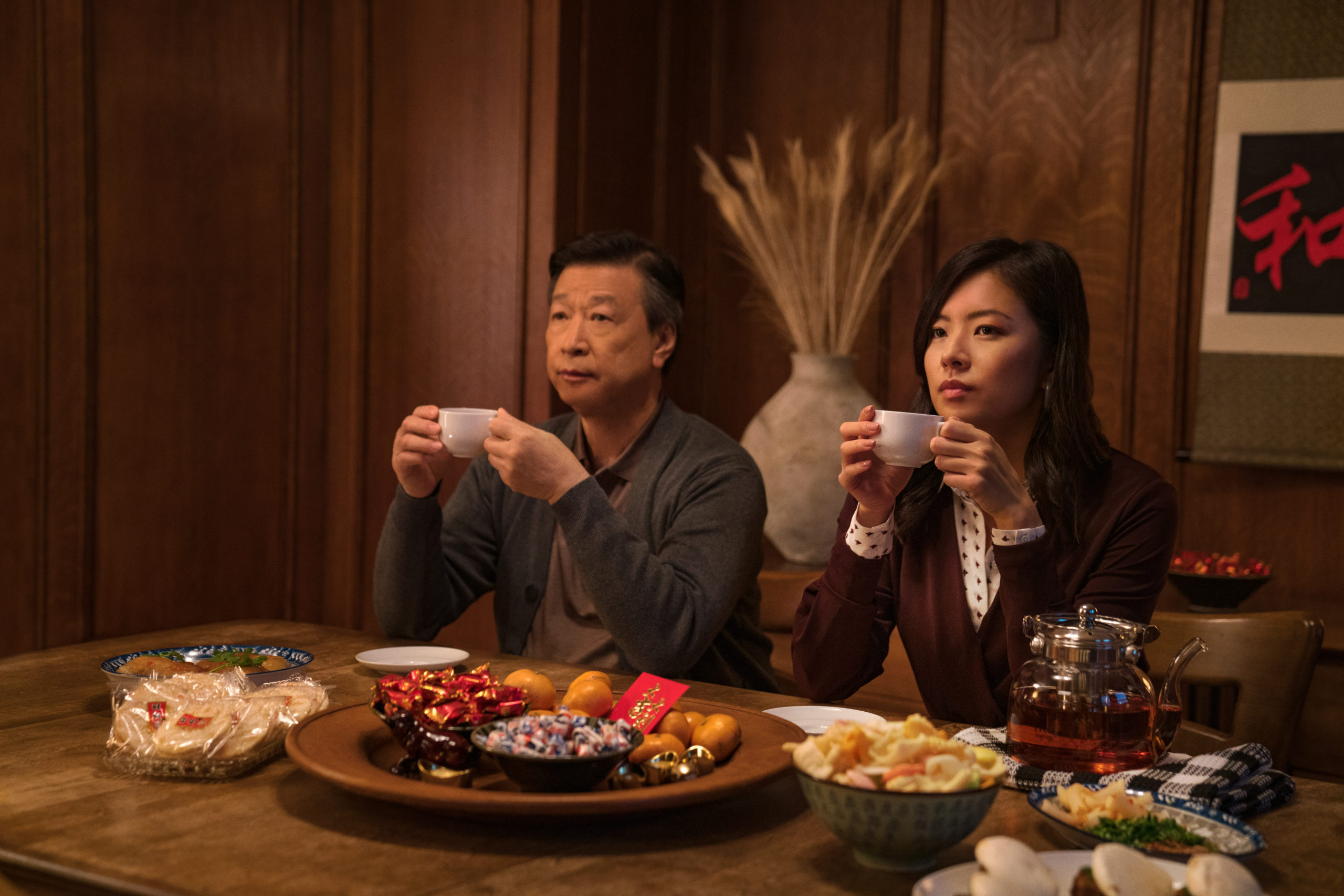 And yet, Tigertail’s abundance of restraint is also part of the point — it’s a perfect reflection of its main character. In his golden years, Pin-Jui is no longer involved in the loveless marriage of convenience to Zhenzhen that brought him to America, but his singlehood is also rather joyless. A life spent devoted to building a life in the U.S. has clearly left him bitter. In flashbacks, we see how he pushed his kids toward excellence — a cultural stereotype of Asian parents that, here, speaks to Pin-Jui’s deep-rooted need to prove worthy of America — and buried his own desires.

When he walked away from Yuan, without even saying goodbye, the only way he could compartmentalize that grief was shutting down completely and burying himself in this new American life of being a husband, provider and, eventually, a father. With his own dad dying when he was very young, Pin-Jui had no male role model — so he became the sort of default stoic dad we’ve seen so often in movies and television. He didn’t know any other way.

But as Yang’s sympathetic portrait demonstrates, that kind of mask only works so well. His ex-wife now happily in a new relationship — and with Angela suffering through a difficult breakup — Pin-Jui is walled off from everyone around him, unable to articulate his sense of emptiness. When he randomly finds Yuan on Facebook, it offers him a lifeline to the existence he could have had, but even his reunion with her (now played by Joan Chen) doesn’t quite go as planned. Pin-Jui gave up everything for the dream of America, but if Angela is as emotionally withdrawn as he is, did he really provide her with that great of a life?

Yang saw “Parents” as an opportunity to argue that our moms and dads — whom we too often only see as flawed, uncool old people who don’t “get” us — had whole worlds of experience before they decided to become parents. That Master of None episode was his attempt to reach back to the past, in a sign of reconciliation and gratitude, to acknowledge that sacrifice. Tigertail isn’t as cutting, but it’s just as impassioned. Pin-Jui can never retrieve the life he left behind in Taiwan. But Yang’s movie honors that loss as best it can.