Third Boob’s the Charm: A Very Robust History of the Three-Breasted Woman

From witch-burnings to ‘Total Recall,’ what’s the deal with third hooters? Breasting, breasting, one, two… three?

Body parts tend to come in ones, twos and shitloads. There aren’t any that people have three of. And yet, over the centuries, a third breast has inevitably popped up.

For example, extra honkers show up in a lot of faiths (breasts are often used in art and religion to symbolize fertility). There are temples dating from 2000 B.C. dedicated to the Hindu goddess Meenakshi, who grew up with three breasts but, upon meeting her husband, was transformed and only had two from then onwards. The Temple of Artemis in Turkey, originally built in 700 B.C., was filled with statues of the eponymous goddess sporting either dozens and dozens of breasts or dozens and dozens of vaguely breastlike gourds (way more than three, though, and we’re really focusing on threes here).

Similarly, there is a tradition in Frascati, just outside Rome, of baking cookies of a woman with three breasts, Pupazza di Frascati, a goddess of abundance. The tale goes that a wet nurse who was feeding the children of the area came up with a way of keeping even the most mischievous of kids under control: She attached a third, fake breast filled with wine and fed them that, calming them down. The cookies are a fairly new tradition, emerging in the 1960s, but wine has been made in the region since 500 B.C., so the story of the wet nurse is likely to be fairly ancient.

Meanwhile, in the Middle Ages in Europe, women were regularly burned as witches for having “extra titts” that were supposedly used to suckle the Devil.

There is a medical condition involving extra breasts, but it tends to manifest as less of a “sexy three-boobed alien” thing and more of a “who wants to see my weird lump?” kind of deal. Polymastia often involves small areas of breast tissue developing in the armpits or on the stomach, and often goes completely unnoticed. However, in some circumstances, a full extra breast with nipple can grow in unusual places. An 1887 image from a medical textbook shows a woman nursing a child from a lactating breast on her thigh.

There is, of course, a big difference between having three breasts and just having three nipples. A great many people have a third nipple, also known as an accessory nipple. Up to one in 18 people are thought to sport one, in fact — Mark Wahlberg and Chandler from Friends are just the nip-tip of the iceberg. It’s an evolutionary throwback, apparently. Both Mallrats and Tales From The Crypt: Bordello of Blood feature three-nippled women, but the third nipple in Mallrats is fake for reasons that are never really gone into and the woman in Bordello of Blood is a vampire.

Anyway, we’re not discussing third nipples, we’re discussing third breasts. So let’s get back to it: In more modern times, it’s the worlds of science fiction and fantasy that have really gone for it in terms of titty-tripling, particularly slightly left-field, cult sci-fi. There’s one enormous, Schwarzenegger-starring exception that we’ll get to, but otherwise, three-breasted women are limited to fairly deep cuts or fleeting glimpses — generally there to underline the weirdness of whatever world they inhabit.

Yakov Protazanov’s 1924 film adaptation of Alexey Tolstoy’s novel Aelita: Queen of Mars features a Martian queen dressed partly like a belly-dancer, partly like an umbrella, sporting a monobrow and a kind of three-cupped bra. The novel it was based on doesn’t at any point feature three-breasted women. It is, however, racist as fuck. The author — a distant cousin of Leo Tolstoy — was branded a “literary prostitute” by George Orwell.

There are no stories in Nine Hundred Grandmothers by R.A. Lafferty (1970) about women with extra breasts, but the cover of one edition sports a Saul Bass-esque triple-titter. A 1977 Pink Floyd bootleg features a doctored photo of a topless woman with three breasts. The Hitchhiker’s Guide to the Galaxy, published in 1978, has a fleeting mention of Eccentrica Gallumbits, “the triple-breasted whore of Eroticon Six.” The cult 1982 Rankin/Bass animation The Last Unicorn has one character, Celeano, who is an elderly humanoid vulture with three breasts. 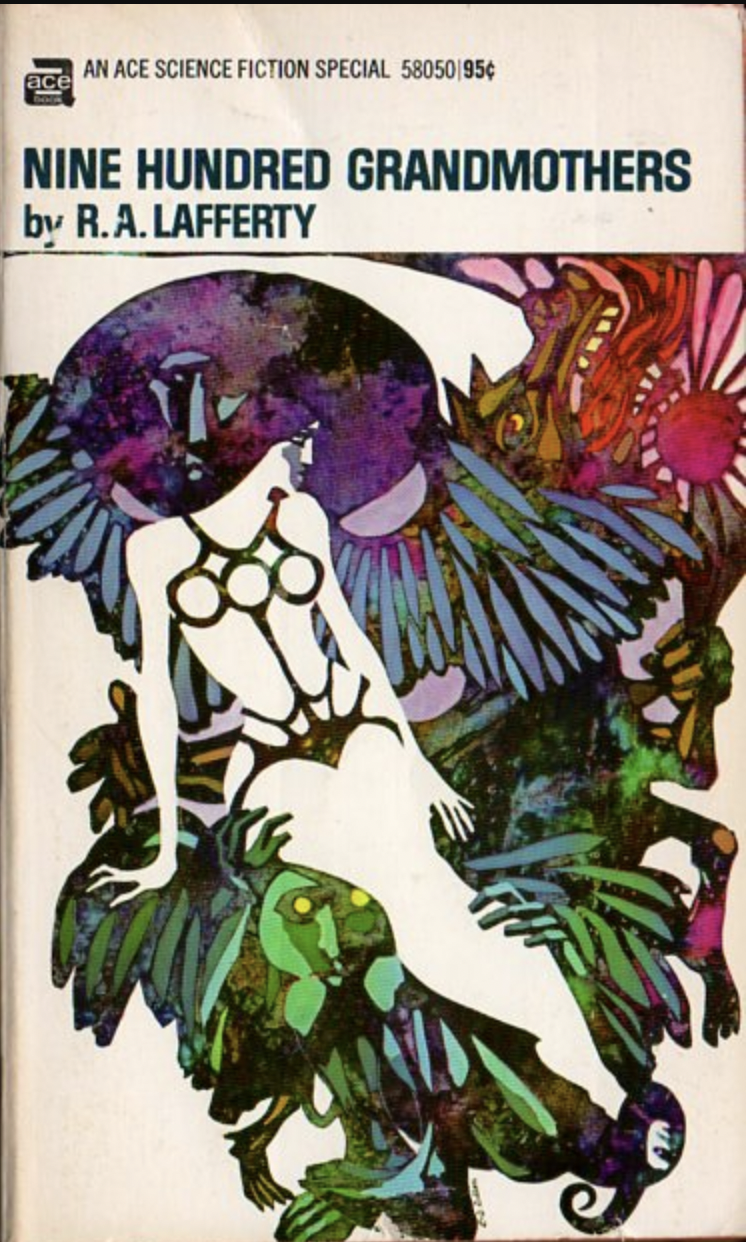 In the aftermath of Star Wars, almost every sci-fi movie featured some variation on the “a whole load of alien species partying together” cantina scene, and plenty of them opted for one of the species to sport a third hogan. 1980’s cheerfully crap sci-fi romp Galaxina (which has a main character called Captain Cornelius Butt) has a sequence set in an alien brothel featuring a three-breasted extraterrestrial sex worker. 1986’s Vicious Lips — about a band in the far future trying to make it to a gig on a distant planet — has a scene in an alien nightclub featuring a three-breasted woman with an extremely 1986 kind of punk-baroque hairstyle. In 1989, Star Trek V: The Final Frontier had a cantina-like scene on the planet Nimbus III featuring a triple-breasted, cat-faced alien stripper.

Then, in 1990, along came Total Recall, the Citizen Kane of three-breasted women movies. While she only features in one scene, actress Lycia Naff made quite an impression. She told Vulture that the plan was originally for her to have four breasts, but “the feedback was that I looked too bovine, like a cow ready to be milked, and that wasn’t sexy.” Naff didn’t have a good experience filming the scene — she had food poisoning, felt uncomfortable with Arnold Schwarzenegger and found the part where her character flashes him so upsetting that she was close to tears.

When a remake was announced in 2012, half the press around it involved speculating whether the “three-breasted hooker from Mars” would be present. Kaitlyn Leeb took on the role, and she was asked repeatedly whether her three breasts were real. “There were a bunch of people at Comic-Con asking if I had surgery for the third one,” she told the Calgary Herald. “Others thought that the two on the side were real. I guess that’s the one thing that bothers me the most is that they think I’m out there prancing around Comic-Con with my breasts out. They really are not mine.”

In 2002, Adam Sandler’s animated Eight Crazy Nights featured a rare example of a three-breasted woman in a non-sci-fi context — a character called Mrs. Selman “with her one extra breast,” also referred to as Mrs. Triplenipple. In 2014, two years after the Total Recall remake, a model named Jasmine Tridevil claimed to have had a third breast implanted by a surgeon that she was forbidden by an NDA from naming. Tridevil said she had the surgery to make herself repellent to men. While her story got widely reported, it was revealed to be a hoax, and she later unsuccessfully launched a GoFundMe campaign to pay for the surgery. Finally, in 2018, Italian fashion label GCDS sent two models down the catwalk wearing prosthetic third breasts, something the designers explained was intended as part of a “wake-up call” in a collection inspired by dystopias.

And that’s kind of it — a handful of movies, a hoaxer and a cookie. In 2011’s Paul, Simon Pegg and Nick Frost’s characters make a comic, Jelva: Alien Queen of the Varvak, whose title character is a green-skinned three-breasted extraterrestrial. It’s meant to be a massive cliche, a bit of a done-to-death idea, but there are actually fewer about than you might reasonably expect. Given how much fantasy art features alien women wearing next to nothing, comic books’ ongoing issue with almost every female character having planet-sized breasts and low-budget sci-fi movies’ general more-is-more attitude toward nudity, you’d be forgiven for thinking it was a lot more common than it is. It seems kind of nuts given their output that artists like Frank Frazetta, Keith Parkinson, Moebius and H.R. Giger didn’t spend more of their careers painstakingly painting supplementary breasts.

Why, then, does it seem like a much more ubiquitous thing?

It might just be the childlike, dumb-assed nature of it as an idea — it feels like the fantasy of someone with a very limited imagination. Changing the rules of the world by just… adding another boob. It’s at once incredibly weird and not quite weird enough to be interesting.

Or the appeal might just be practical. As a character in a novel by the cult sci-fi writer Robert Rankin starts to explain before being cut off, “One for each hand and one for your mou—”.