It’s okay, I checked with the cops, and it’s totally legal

The phrase “trick or treat” sounds diabolical when uttered by an adult — something I and an older Jewish man realized simultaneously when he opened the door at the first house I visited on Halloween just after 6 p.m. last night. He sighed as he peered over his thick brown spectacles and looked to either side of me, noting that there was, in fact, a grown 40-year-old man with two dozen purple balloons pinned to his man-body standing alone on his front porch.

“Excuse me?” I responded innocently, presenting him once again with the empty plastic jack-o-lantern bucket I bought at the 99 Cent Store earlier.

“You’re walking around on Halloween like a child, sir,” he answered, before closing the door in my face. 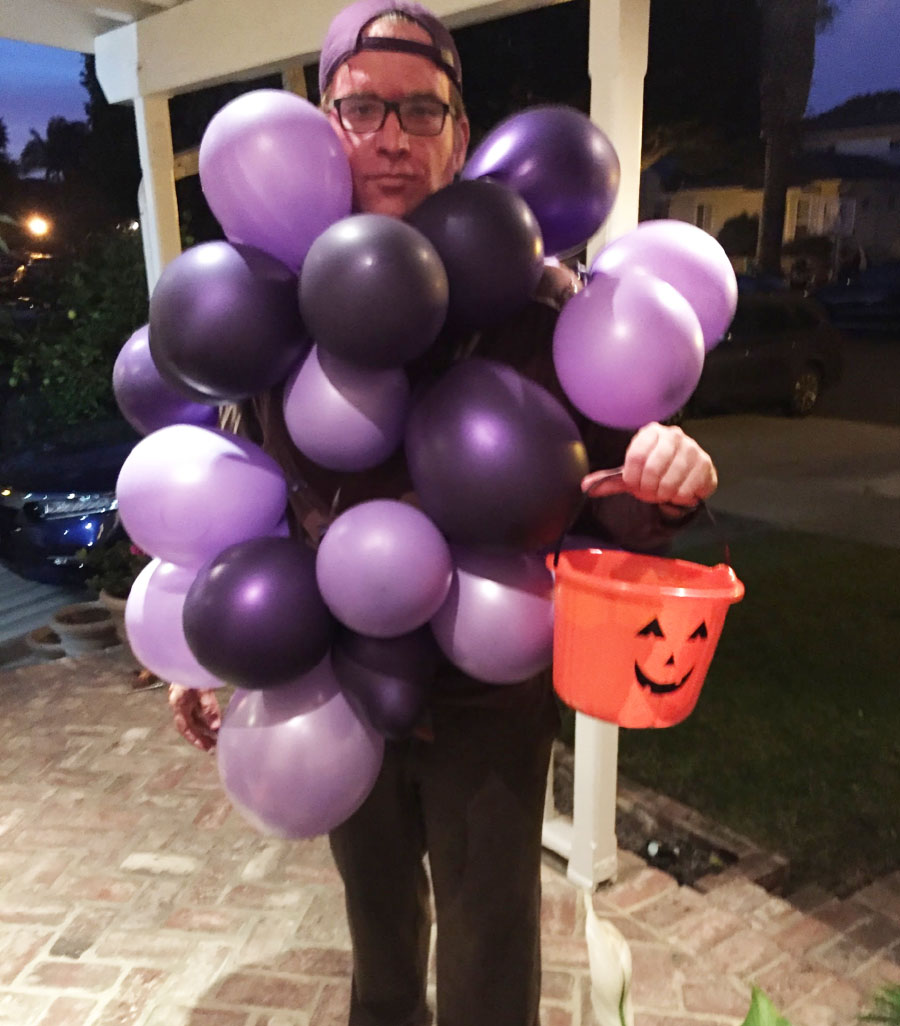 All the more reason why, when my editor asked me to write a story about what it’s like to go trick-or-treating by yourself as an adult man, the first call I made was to the LAPD. Adults trick-or-treating without children in Chesapeake, Norfolk and Newport News, Virginia, for example, are guilty of a Class 4 misdemeanor and can face up to six months in jail. It turns out, however, that’s not the case here in our homebase of L.A. Quite the contrary, actually:

“Good afternoon and thank you for your inquiry. It is not illegal to trick or treat at any age. The act of trick or treating, in itself, is not frowned upon by the department. Please see our safety tips on our website (LAPDOnline.org),” wrote a member of the department’s public communications group.

Shit. That was my out card.

For some semblance of what the fuck I was in for, I polled my Facebook friends to see how they’d respond if a grown-ass man knocked on their door looking for candy on Halloween. The responses ranged from, “I’d invite him in for a glass of wine,” to “I’d get my gun.” Overwhelmingly, though, the most common advice from parents was to find a child — any child — to use for cover, an option that my editor considered “blatant cheating.” One parent cautioned that I should “let the kids go first” when approaching a front door, arguing that I’d “already had my childhood trick-or-treating time.” I politely explained that I wasn’t in this for the candy. (After all, any adult knows that fun-size Kit Kats and Gobstoppers are 80 percent off at CVS on November 1st.)

My own mother advised me to at least dress as something “cute and fun” since there’d be no need to work at scaring people this year — I’d likely be doing that already. Heeding her advice, I opted to go as “grapes,” figuring fruit to be an unthreatening, healthy costume parents could get behind, and once dusk hit, I took to the streets of Culver City, a residential neighborhood on the westside of L.A.

In an intellectual defense of my evening of supposed child’s play, it should be noted that Halloween actually began as a grown-up pursuit. The Celts, who lived 2,000 years ago in what is now the U.K. and northern France, celebrated their new year on November 1st, which marked the end of summer and the beginning of the dark, cold winter. (Celts believed that on the night before the new year, during the celebration of Samhain, the boundary between the worlds of the living and the dead became blurred; to commemorate the event, adult men built sacred bonfires, where townspeople wearing costumes gathered to burn crops and animals as sacrifices to the Celtic deities.) Similarly, since the 16th century, The Day of the Dead, a multi-day holiday celebrated throughout Mexico to remember late family members, has typically occurred between October 31st and November 2nd to coincide with All Saints’ Day. Not to mention, the Awuru Odo Festival in Nigeria on October 31st marks the return to the living of dearly departed friends and family members.

Maybe that’s why I’m pleased — and relieved — to report that my initial interaction with a Halloween Scrooge is the unfriendliest encounter I had all night. The best scenes from my evening: 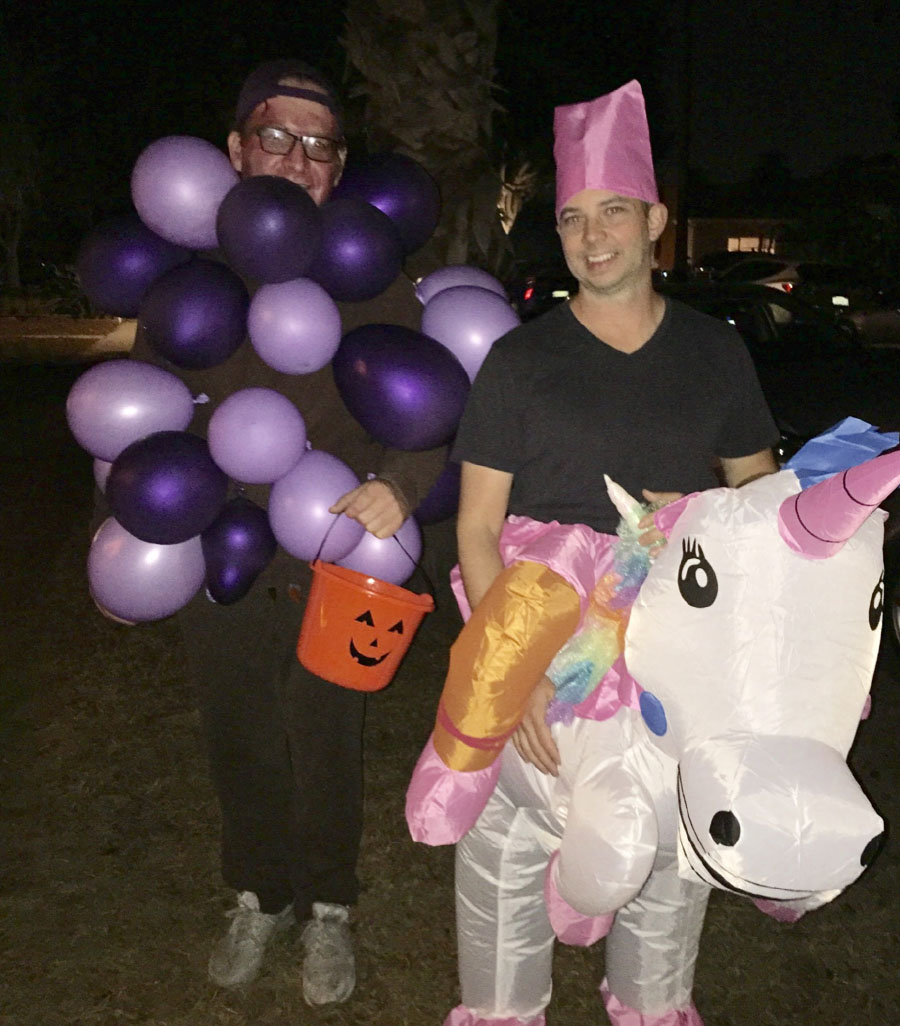 By far, though, the most common reaction to a grown man trick-or-treating is neither contempt nor suspicion — it’s sympathy. “Ohhh, you’re still doing it! That’s so creative,” a friendly female Baby Boomer said slowly with a knowing smile. “You go ahead and take two pieces.” Then she told her husband to have Tommy come out front and meet a “friend.” I expected their grandson to fly around the corner in a Superman outfit, but instead, I was greeted by a lovely — but no-doubt-about-it mentally disabled — grown man who looked to be about my age.

I called it a night not long after. I was out there for about two hours in total, returning to my friend’s house at around 8:30 p.m. They, too, had had a big night. Such a big night, in fact, that they’d run out of candy, a predicament that left them devastated as they were now turning kids away from their door. Lucky for them, though, my bucket was overflowing with sugary foodstuffs. And so, I donated my bounty to them, which they spent the rest of the night handing out.

Guess what I was doing wasn’t just legal — it was a public service.