Okay, admittedly, we’re dumb for ordering food we discovered via viral video, in this case “the world’s largest deliverable pizza” by Big Mama’s & Papa’s Pizzeria. But hey, in our defense, we quickly realized we were within delivery distance — for a $100 up-charge at least — and our curiosity overcame us. Plus, we figured, it would be funny. And, maybe most importantly, it would win over our coworkers in other departments. After all, who doesn’t like free pizza?

The 54-inch by 54-inch cheese and meatball pizza — we argued for about an hour in Slack about toppings and somehow landed on this combo — was delivered from an hour away (at a cost of roughly $400), atop a smart car driven by an older Italian gentleman. (Per Big Mama’s & Papa’s, it can feed up to 70.) The display itself was indeed something to behold. It was all downhill from there, though. Yes, I know that there’s a saying that goes something like, “Pizza is like sex — even when it’s bad, it’s still pretty good.” But I always knew that phrase to be half wrong, because bad sex is truly bad. Now, thanks to this pizza, I know that the whole aphorism is bullshit — i.e., there is bad pizza that is never “pretty good.”

But don’t just take my word for it, here’s what my fellow MEL staffer members thought as well:

Eddie Kim, Features Writer: The people who know me best also know that my appetite routinely knows no bounds. Throwing up after two hours of meat at an all-you-can-eat Brazilian BBQ joint? Yep, that happened. Drunkenly reaching over to a neighboring table at Denny’s to polish off someone else’s chicken fingers? Yup. Eating a dozen tacos on a dare? A whole pie for a hangover breakfast? Sure. Bring it.

Well, this gigantic pizza brought it. With a stomach empty of anything but overconfidence, I gulped down three quick slices, undeterred by the rat-turd bits of “meatball” and the skin-graft cheese hardening on each slice. “It’s shitty, but it’s just pizza,” I told myself, and others.

Forty minutes later, I realized it wasn’t “just pizza.” Pizza normally doesn’t churn up acid in my stomach like a battery factory. Pizza normally doesn’t leave my brain drifting in a coma of fat and sugar. My mouth was sticky with dehydration. The back of my eyeballs hurt. And, in one of the rare moments of my life, I actually regretted eating something. 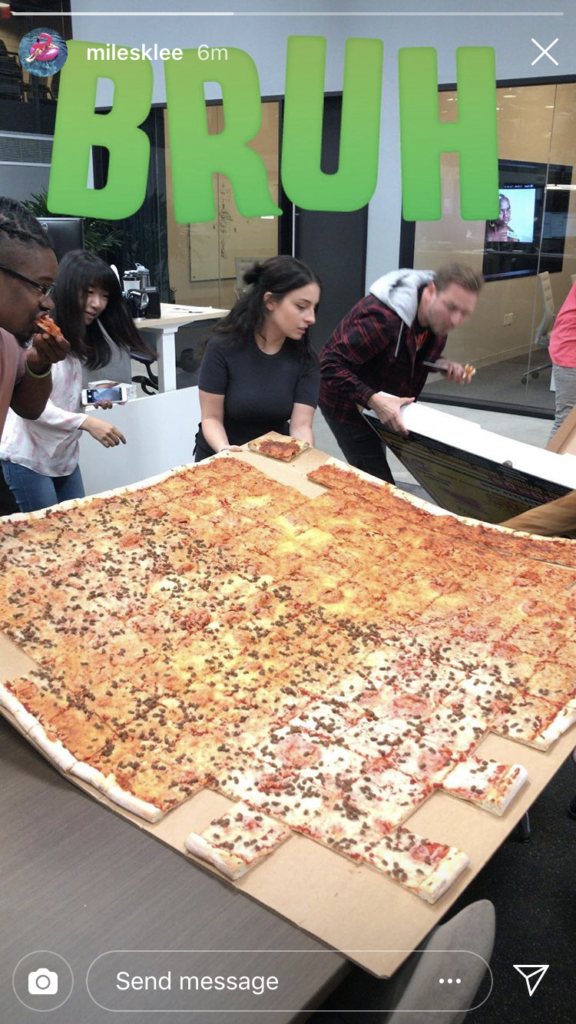 Nick Leftley, Senior Editor: What can I say? It tasted like old shoes and regret, and I ate five slices anyway. I spent the rest of the day wanting to violently poo on the hood of a car like an angry goat, but I’d still probably do it again if someone was dumb, drunk or desperate enough to order it. I am not a smart man.

Andrew Fiouzi, Staff Writer: I ate one slice. It was bad. I’m not a masochist.

Brian Smith, Features Writer: I forwent breakfast in anticipation of the bionic pizza and was more than ready to inhale whatever was put in front of me by the time the pie arrived at 11:30 a.m. But like my colleagues, I was wholly disappointed by the first slice, reminiscent of my second-grade cafeteria pizza offerings. Fortunately, the 10-square feet of roof-paneling pizza came with an endless supply of faux Parmesan cheese and pepper flakes, for which L.A.’s worst pizza became a (very) humble vehicle. 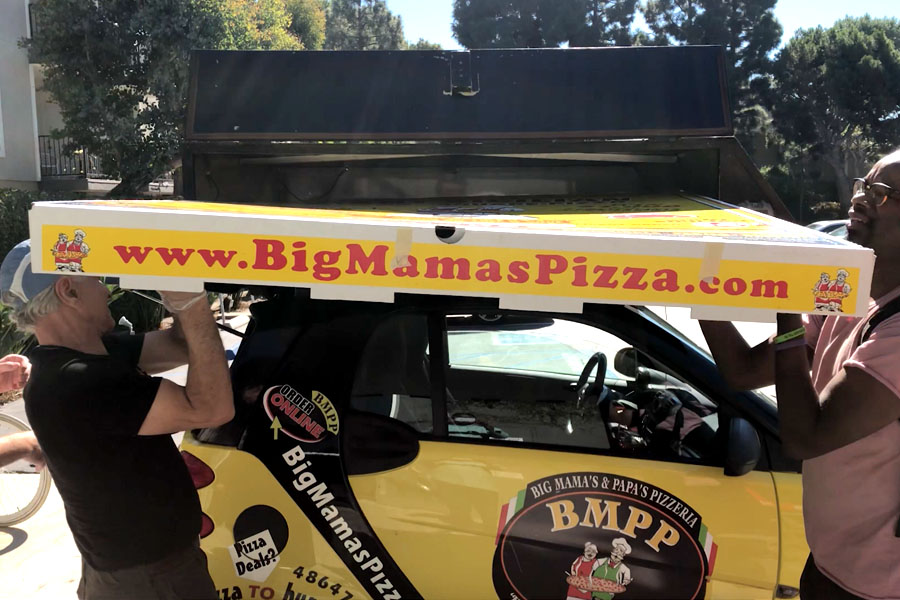 Erin Taj, Art Director: I’d rather eat a Lunchable pizza. Oh, and you don’t get to keep the giant box, which is LITERALLY the only good thing about this “pizza.”

Josh Schollmeyer, Editor in Chief: There were, of course, warning signs everywhere. Mainly: The fact that any ridiculously oversized foodstuff (a la the turducken) is difficult to properly cook with even the finest ingredients. Not to mention, the additional fact that it would be delivered to us from an hour away, atop a car, making its journey via perpetually congested L.A. freeways like an edible bikerack. Somehow, though, I deluded myself into believing that it wouldn’t taste like smog, and that if you’re marketing a pizza that large, you know the appropriate amount of time it needs to spend in the oven so as not be to be under- or overcooked.

These assumptions, however, were pierced the moment I saw the “meatball” toppings. As with the above, I half-heartedly lied to myself at first — believing it to be a scale issue (that is, the meatballs on a historically giant pizza are gonna look small). But alas, it looked as though a sausage had shit out a couple of very tiny constipated turds. They didn’t, however, taste anywhere near as good. 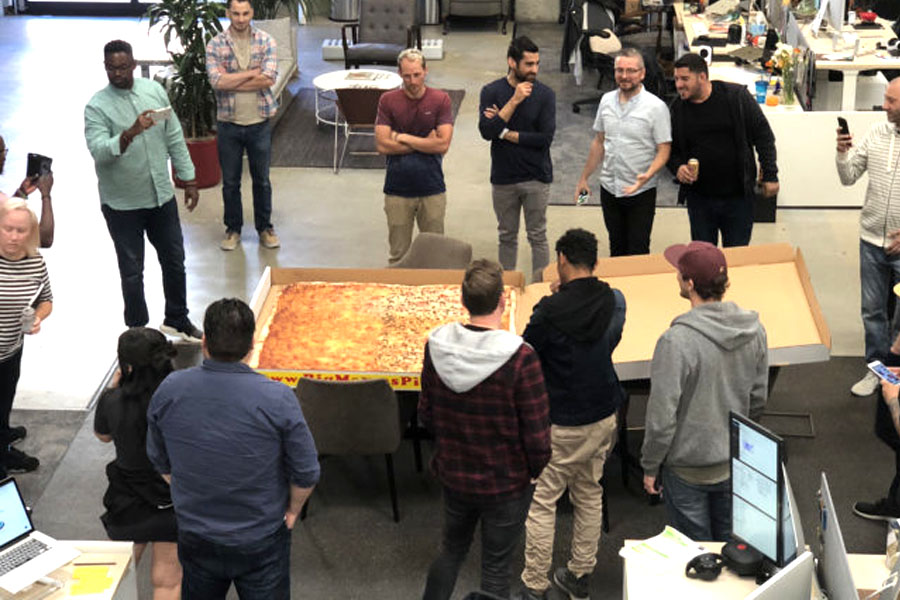 Ian Lecklitner, Staff Writer: Because I’m not sure what else to say, here’s a rundown of the emotions that I experienced while painfully chewing through three thick-ass slices of this extremely disappointing monstrosity:

Tracy Moore, Staff Writer: Let me be clear: I’m the person who tipped the staff off to this pizza, so I take full responsibility. But two, I have some of the lowest pizza standards around, because I believe truly that it’s nearly impossible to fuck up a pizza. I spent most of my life in rural Tennessee eating bad pizza and loving it. I still think fondly of my public school lunch cafeteria rectangle of pizza, one which no doubt paved the way for my ability to fully enjoy Totino’s during college. Back then, I’d sometimes eat half a pizza for the entire day’s calories, hanging on until I could split a pitcher of beer at night with my friend, who was obviously named Crystal. I also worked at a Pizza Hut briefly during this time, in what you might call the Stuffed Crust Era, and unlike many people, didn’t despise it.

So if anyone in this office had spent their life ready for shit pizza like this to seem good, that person is me.

And yet, something was truly amiss with this pizza. It was, like, not human. Somewhere during the delivery drive from Northridge to Marina del Rey, the 405 must’ve gotten baked into it, because it was simultaneously over and undercooked, both densely impenetrable and suspiciously soft at the same time, weirdly old-tasting even though it was allegedly fresh. It was Almost Pizza, like the SNL sketch that no one seems to have seen but which is among the best things ever made (unlike this pizza). I only had two slices, and my best description would be that it tasted like eating a memory foam mattress sprinkled in old meat dust. That was enough to keep me off food the rest of the day. Later, I managed to get down a few beers to soak into the large book I’d consumed. So weirdly it felt just like college again, only this time with mad shits.

Miles Klee, Staff Writer: As a native of New Jersey, I grew up in what’s known as “The Pizza Belt” of the country, where you’re most likely to encounter truly outstanding American-style pizza. This means I harbor a natural skepticism of pizza made anywhere else, California very much not excepted. Still, there is such a thing as “good” bad pizza out here — and I find it perfectly satisfying.

At best, the giant hell pizza might have been good-bad, but it turned out to be plain old bad-bad: wet cardboard squares supporting a layer of congealed goo that had no claim to tomatosity or mozarellahood. The texture was inconsistent yet universally awful, and the “meatballs” sure weren’t helping. On my second slice, I could almost convince myself it was edible, perhaps fit for the end of a long, drunken Saturday night, but the third slice brought me crashing down to earth, the sum of what I’d eaten clotting painfully somewhere just underneath my heart.

Even if it’s possible to make a decent pizza of such size, this place was never going to be the one to pull it off. Finally, THAT’S NOT WHAT SICILIAN PIZZA IS, ARE YOU KIDDING ME???

Alana Hope Levinson, Deputy Editor: To pick up where Miles left off, to call this pizza the “Sicilian” is an affront to my people. In Italy, calling old hamster turds “meatballs” is a deadly sin. We will never speak of this again.